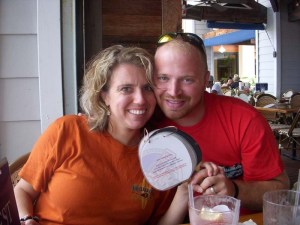 Get caught up here:

In more ways than one!  This week seemed to take a while, but not as bad as last week… but this Friday post is more so focusing on our Last Friday (last day) in Hawaii which was September 9.  Now as you know, Hawaii is 5 hours behind Missouri time so by the time we got home it was 9 am Saturday Morning, Missouri time, and boy was my internal clock ever messed up, but more on that in a bit.

This was our view on Friday morning.  And even with the long day from the night before, we were still awake at 6:30 am.  So we got up and went out exploring our new part of the city.

I was impressed and shocked by the tree roots.

Then we went back to our hotel room, packed up our luggage, met up with mom & dad & grandma in the lobby, checked out of our room, handed our luggage off to the bellhops, and went to an early lunch.

Since the airlines put us up for the night, they also gave us taxi cab fare to and from the hotel and $5/person breakfast meal vouchers (which we didn’t use) and $10/person lunch meal vouchers which we did use.

One of the restaurants we could eat at was Bubba Gump Shrimp Company.  We’d never eaten at one so we thought, why not!

One thing I wanted to accomplish in Hawaii was kissing in the rain.  I guess God knew this and so on Friday while walking to Bubba Gumps, it started showering!  I finally kissed my hubby in the rain!!!  I was so excited and jumping up and down on the sidewalk 🙂

Now they have this cool sign thing.  If it is blue, your waitress just comes to refill drinks, etc as she sees fit.

But If you NEED one NOW you put up the red license plate and whatever waitress/waiter or bartender sees you first comes a-runnin’.

The paddle had drinks, appetizers, desserts, you know, the usual thing on the table.

We started with Bubba’s Far Out Dip and it was super yummy.  It was gone before I even got photos of it!

I had the Texas Cajun Chicken Sandwich b/c remember, I don’t like fish.

Hubby had Bubba’s After The Storm Bucket of Boat Trash which was all kinds of fish.  And yes, I tried a bite of everything.  See what good wife I am 🙂  They got some funny faces out of me too b/c remember, I DON’T LIKE FISH!

And this, this was dessert, a Chocolate Chip Cookie Sunday.  Oh, it was yummy!  I’m fairly certain I ate my way through Hawaii but when will I possibly ever get this chance again?

After lunch, we went back to the hotel, got our bags, grabbed a couple of cabs, and headed for the Honolulu airport again.  Here is the Taxicab fair in case you wondered.

All their bathroom signs cracked me up, the women had long dresses and lei’s and hair flowers and the men’s had leis.

This is sitting on the plane headed toward the runway.

We were told the planes never fly over land, they always fly around the islands so we were circling Oahu.

Hawaiian airlines offer complimentary meals so this was dinner.  I think it was cheese manicotti or you could have some sort of a turkey sandwich.

And this was the dessert that came with it.  I don’t know what it was but YUM!

I drank more pop on this trip than I have in the last year.  I gave pop up for over 30 days… now I need to kick the habit again!  But the water over there, some of it tasted weird!

This was up in the air but I couldn’t get over how it looked like snow!  It’s just clouds.

And the plane sunset.

This is flying into LA.

For anyone who follows me on Facebook, I was keeping myself entertained with Facebook status updates when sitting in different airports along the route home.  By the time we got to LAX, we had to go out of the terminal, move down, go back in through security to get to the American Airlines terminal.

Woohooo I get to strip down again!!!! I’m getting good at this!!

Ok so I had to leave the terminal, strip down again, and enter a differ terminal, I have been to LA, LOL 🙂

Then hubby informed me that the US military who are defending our country has to strip down and go through security to get on planes.  How sad is that… they are defending our right to freedom…. who am I to say though.

So then I followed up with:

So if you walk down the street wearing a balloon hat people look at you strange, but if you skip thru the airport at midnight CA time they laugh at you.

The next one was:

Not that it matters but I noticed that my stats are updating via mobile but my photos update via Facebook for iPhone…. weird!!

See I was tired and loopy and keeping myself entertained with Facebook.  Finally, we boarded our plane and headed to DFW.  To which my first FB message was:

Yes, this was at 6 am mind you.  So then husband started quoting lines from the movie Forrest Gump and we were laughing our heads off.  And yes, people were looking at us strangely, but when you’ve been traveling ALL NIGHT and not had the best of sleep… what can you expect!

But the best quote, DFW must have the new body scanning system (which they also had in Honolulu) and the lady came through and was like, “I didn’t have to take my blouse (yes she said blouse) off going through airport security b/c the new scanner sees right through your clothes.

By the time we got home, I was ready for a shower and clean clothes, and my internal clock was so messed up.  But if I had to do it all over again, would I?  YOU BETCHA!