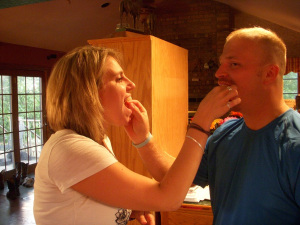 So first off, I must tell you this because to me it is funny… I actually had people saying to me…. me of all people… don’t forget to take pictures.  Um… if you’ve followed my blog any at all, you’ll notice, I LOVE photos :).  Ok, just sayin :).

So to start things off we went and stayed at my parent’s house Friday night, September the 2nd so we could just leave from there.  It was my mom, dad, grandma, hubs, and me going to Hawaii.

Some background details: Back in January my mom was talking to me one morning and this is the way the story goes:

Mom: So your grandma wanted to go to Hawaii.  Apparently your grandpa wouldn’t take her because he was stationed there back during WWII and never felt he needed to go back.  She’s been asking everyone in the family to go with her.  Your Aunt Ellen (actually Great Aunt Ellen) said she’d go with her so then Floyd (AE’s boyfriend) said he’d take her (as in AE) so your grandma backed out not wanting to be a 3rd wheel.  So then AE & Floyd backed out.  So your grandma has been asking other people to take her.  When your dad found out, he volunteered us to take her so I guess this summer your dad and I are taking your grandma to Hawaii.

So needless to say, they agreed, we sat on this all winter and summer long, waiting for September 3rd to come around! And then…………..

We went to the Island of Oahu and stayed right on Waikiki beach, but I won’t jump the gun just yet… back to Friday night the 2nd.

Since our Anniversary was actually Sunday the 4th, we really couldn’t take the cake with us to Hawaii…. so we cut into our wedding cake top on Friday night. 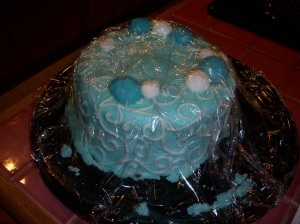 So far, it looked good… 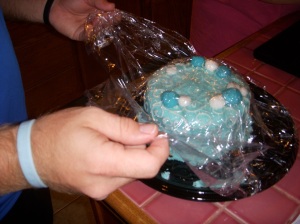 It actually held up really well in the freezer too!

The gal who made our cake couldn’t believe we were actually eating year-old cake, even though it is “tradition” so she wanted to make us a new one, but I wouldn’t hear of it.

And really it wasn’t bad.  The top part that was next to the icing was a smidge dry, but otherwise, the cake was still very moist. 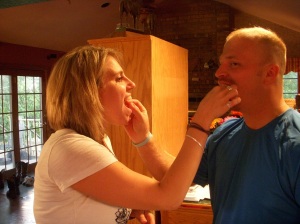 Yes if you’ll remember back, we had a funfetti cake.  Partially only because they left it to me to decide and no one would help me decide, so I went for something hilarious, such as the nice funfetti 🙂

Then a friend missed our wedding, she had the date off a week so for our 6 Month anniversary, she gave us a bottle of wine.  We decided to save it for the 1-year cake-eating ceremony. 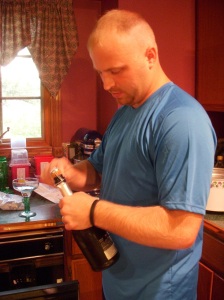 Yes, we’re drinking wine in Martini glasses, b/c hey, that’s how we roll! 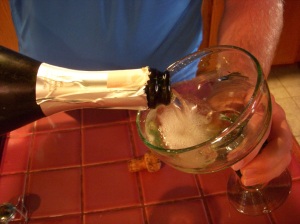 It was so weird sleeping in my old bedroom again.

And my old bedroom looks nothing like it did when I lived there.  For one my bed was shoved up in the dormer, as opposed to taking up all this precious floor space!

The dormer is that window area there in case you wondered.

Those photos were done for my 15th birthday.  That was my old show mare, Lena Quixote or Lena or Momma Q 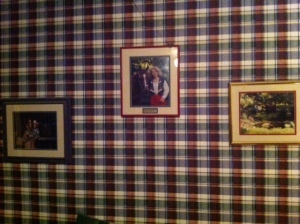 Here is another photo of me showing her way back in the day.  I was probably 12 or 13 here.  Yes, you have to wear hats but mine had fallen off.

Then my bathroom was done up in toe shoes because I was huge into Ballet.  Those are even my toe shoes hanging on the towel rack.

And just for good laughing measures, here’s my 7th grade ID.  Yes, there is a smiley face sticker on top of my head blocking out my “Lovely” hair! 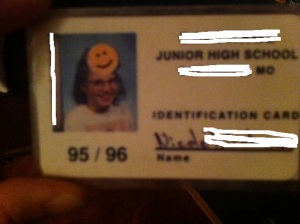 Before we went to bed I asked again when our flight was, Hubby said 9something in the morning.  So it’s an hour’s drive or so to the airport, that’s 8 and they say to be there 1-2 hours in advance, yet he was telling me I didn’t have to get up until 6:30 because we weren’t leaving the house until 7:15.  Yeah, do the math, it doesn’t quite add up.  Luckily we woke up at 5 out of sheer excitedness and it turns out we were picking grandma up at 6:15.  Whew, saved by the nerves!

0 thoughts on “So You Think You Can Sleep”