If you’ve been paying attention to the weather around the country any this week, then you’ll know the Midwest was supposed to get hit with a HUGE potential of Severe Thunderstorms/Tornadic weather. I woke up this morning to a HUGE bang of thunder. I always say that all we need is a good thunderstorm and all trees just blossom BAM! Yup, I was right.

The other thing to note is we’re on baby watch 2018. No… not me. The horse’s sillies. One mare is 1 week overdue and the other is about 2 weeks out. With crappy weather like this, I halfway expected to walk out and find 2 babies on the ground. So far, notta.

But there is a light rain going on and by the time I was done feeding critters, I’m kind of soggy. Which reminds me of a day not too long ago that I got soggy. Let me explain… 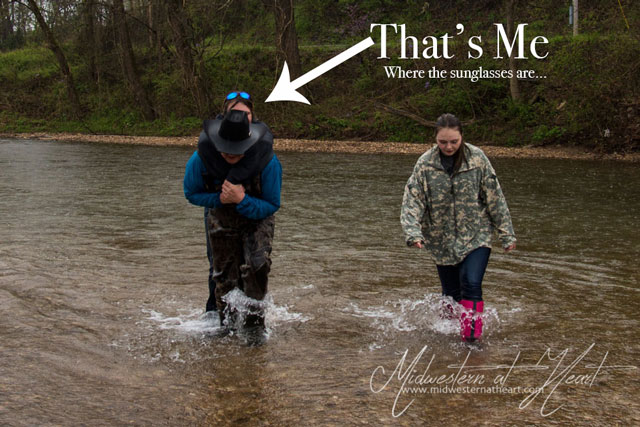 A couple weekends ago we were helping out with Trails for Kids. One of the events to raise money is the Duck Race. We sell little toy ducks that float for $2/each or 3 for $5. Then we go to Sugar Creek, the creek that runs right alongside the campground. We dump them in, and the winner wins half the pot of money collected. Easy enough, right? Sure…

Hubby, Jared, Triston, Shawn, and Tbug got in the water. Two were to hold the net, one was to dump ducks, and the others would A) collect winning duck, B) put ducks back in the barrel, and C) help collect ducks. Sounds simple enough, right? 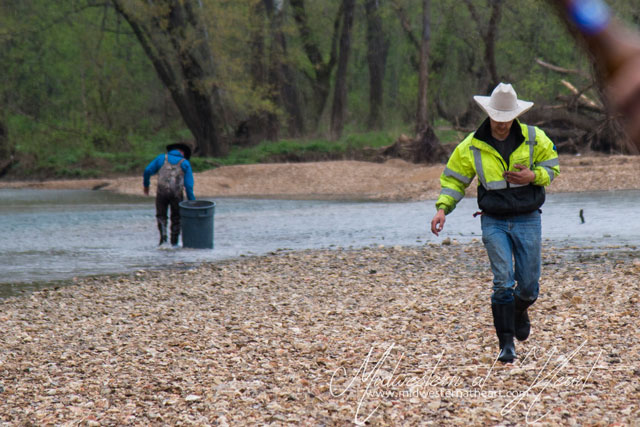 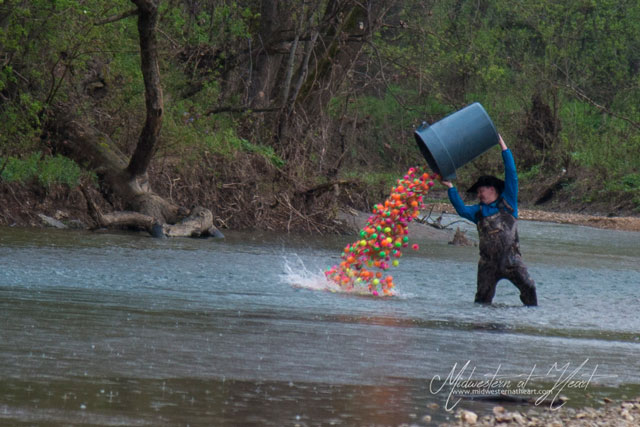 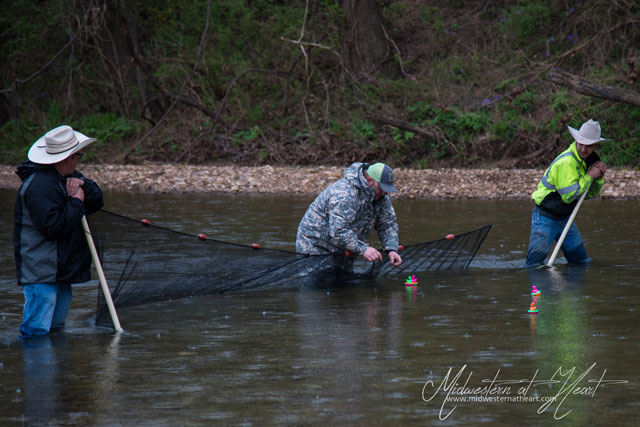 Everything was going according to plan…. until… When Jared dumped the ducks… They didn’t choose to swim down the river. Instead, they all swam to shore. I guess they were tired. Oy. So we had to shake them loose.

After Triston handed Jared the barrel of ducks, he came to relieve Tbug from holding the net to catch all of the ducks. As they started wiggling loose, she had to start grabbing some who weren’t going toward the net and toss them over to the net. 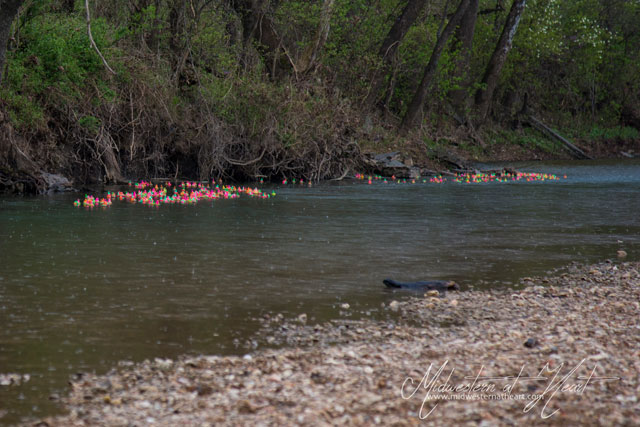 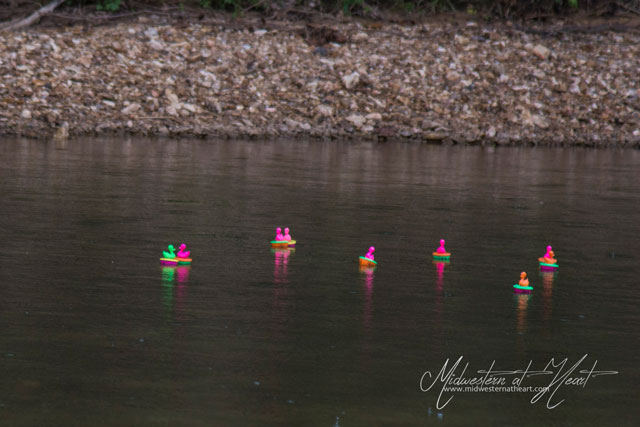 things got a little out of hand. What do I mean? Well, Tbug was taking care of the left side of the net, but a few ducks thought they’d go past Shawn on the right side. It doesn’t work so well. They were outnumbered even with Jared coming down to assist. I’m here to tell you when you have flowing water and a net full of ducks, it gets heavy.

I was the paparazzi. It had also started to sprinkle. I should mention this now. So Jody was standing on shore with me, holding an umbrella over my camera (and my head of course) to keep my camera dry. When I realized they were starting to get outnumbered, I took my boots off (I didn’t want my Cowgirl boots soaked) and I took off in socks into the river to assist.

Have you ever stood in a river in April in Southwest Missouri? It isn’t the warmest. I’m not sure if you can tell by the picture below but I was screeching about it being cold. 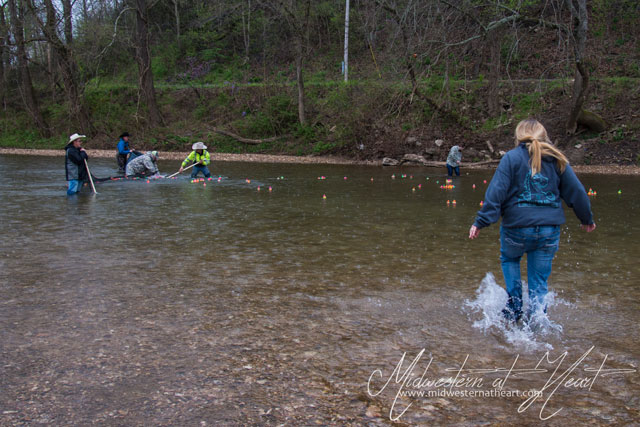 How to Swim in a River in April

So my feet went numb from the cold water… but not really. They just hurt really bad and all those river bed rocks poking them… I got to the point I refused to move. They put me as a post holder for the net. Then once Triston got all ducks free and we got them all collected, everyone went to shore… Everyone but me.

I had asked Jody to go get me shoes. I didn’t care what they were as long as I had something on the bottoms of my feet, as long as they weren’t my boots obviously. Although I seriously considered getting them soaked because my feet hurt so bad.

Jody got back with shoes and I was like, is someone going to bring them to me? Jared decided to come get me and take me to shore. So he acted like he was going to tackle me and… then… he did. I was laughing so hard when he was “running” toward me. Laughing sooooooo hard. So hard that hubby actually joked and asked if we were getting married because I laughed during our wedding day. I cry ugly and didn’t want ugly pictures so I laughed instead :).

So apparently (supposedly) Jared tripped about the time he got to me and actually tackled me. We both went down and I was completely under water. That means… I’m soaked head to toe.

And that my friends is how you go swimming, in the creek, in April.

To add to the laughter… Jared got me up and said to get on his back. Between wet jeans and my feet hurting I couldn’t jump on his back so he drug me through the water. You know when your walking and your leg goes behind you… he’d knock my legs behind me so I looked like I was dancing behind him. I laughed harder. 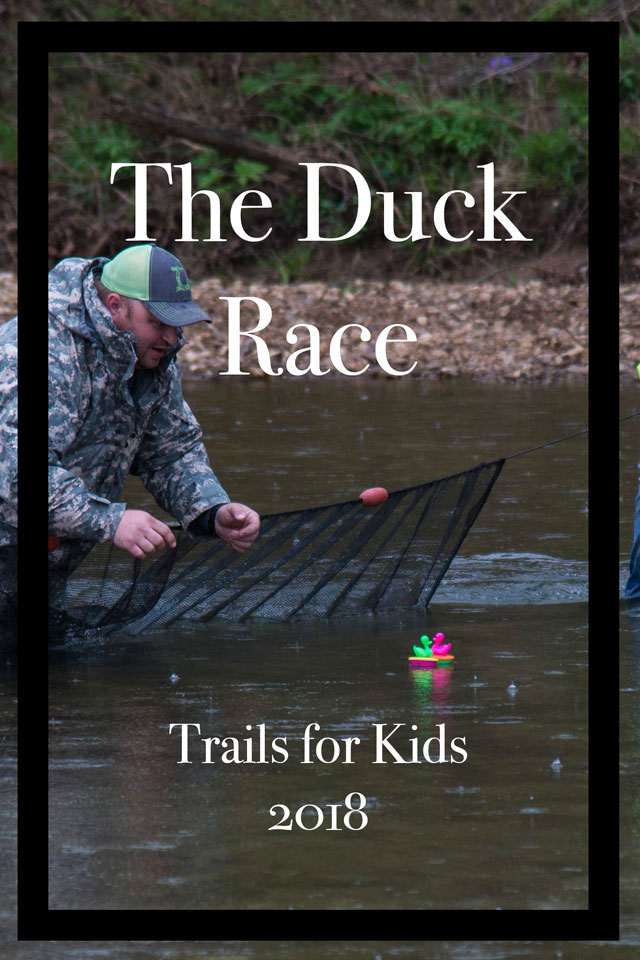 I Like Cheeseburgers!!!
The One Where I Show You What I Wore
Trails for Kids 2016
Famous Dave's Bar-B-Que - Rogers, AR

One thought on “The Duck Race”