AKA… the Cake that Tried to Kill Me….. 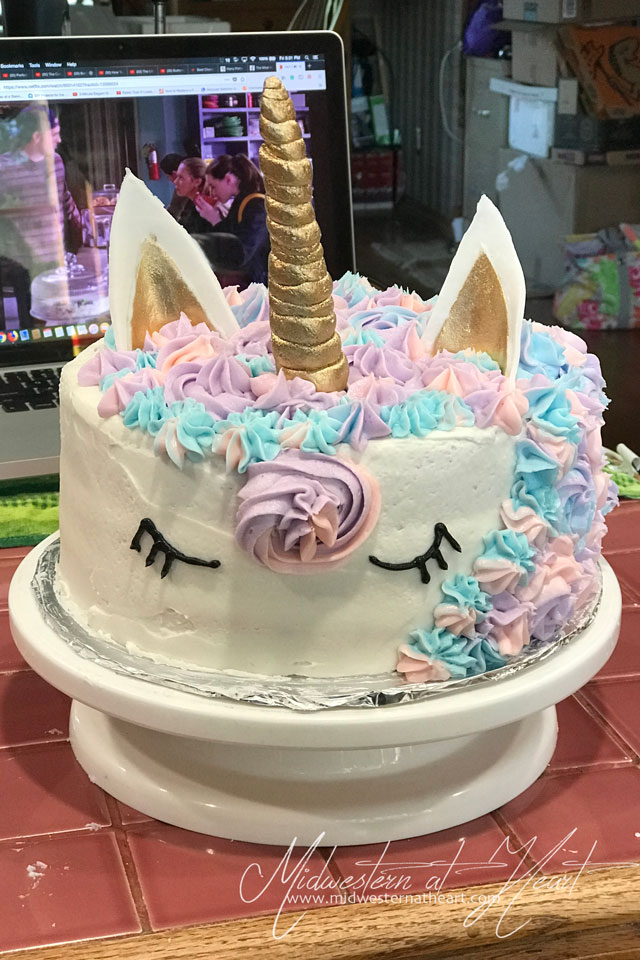 Before we get started on the cake that tried to kill me… Can I tell you a little side story? I couldn’t sleep last night. When I have things to do the next day, you know, a to-do list… I have nightmares about it. My brain won’t shut down and I lie awake wondering a) if I’ll get it all done and b) should I get up now and do it so I’m not wasting my time since I’m just laying here staring at the ceiling?

Although… sometimes food haunts me I think. After I watched Julie and Julia for the first time, I couldn’t sleep. All I thought about was food that night. Learning how to be like Julia. I think I have problems :). But last night all I could think about were the cupcakes that I needed to get done today. The icing, the decorating, the icing. Oy! For over an hour. Then I was hot, but my knees were cold… something weird with me… It can be 110˚ in the shade and my knees will feel like they just came out of the freezer. It hurts like hell! Pardon my language.

Okay, now that I’ve gotten that out, we’ll call it confessions, let’s look at the cake that tried to kill me… btw I didn’t dream about this cake. Maybe that was my problem… 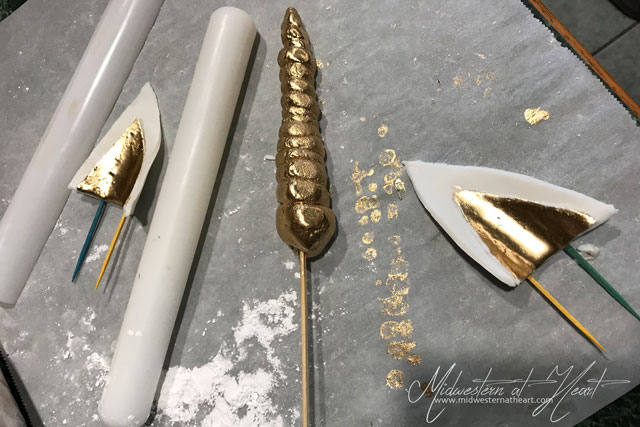 I mentioned that I did a lot of research on this cake. My daughter has liked unicorns since sometime last year. Earlier this year or maybe even late last year I for saw that we would be having a unicorn birthday party. I saw So Yummy’s video on how to make cupcakes, put them in the shape of a horse head, then ice them and put a horn/ears on to turn it into a unicorn. 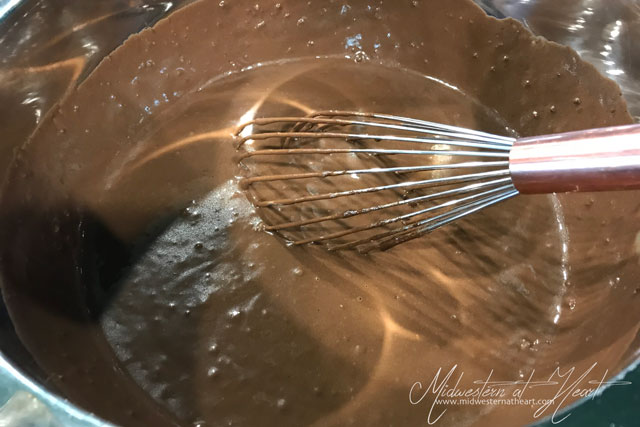 When I saw that video, I planned on making that as the birthday cake for her party. But then I saw the unicorn cake sensation that seems to be taking over the internet. You know, the stacked cake with the unicorn that has its eyes closed (look at my first picture in this post). Obviously, I made macaron’s in that same kind of unicorn sensation. They are really cool. Here might be the point I tell you that when I put the closed eyes on the unicorn cake, Abug looked at me and said, but where are her eyes, nose, mouth, etc. haha. I just laughed and told her it was fine, trust me. But back to the cake…

When I decided upon this cake, I figured I’d make a funfetti cake because, how cool would that be with a unicorn. Really… But then… yesterday with the birthday macarons, I said how I stumbled across a lot of videos. One of which was Cupcake Jemma’s video on rainbow icing in the middle layers. Ooooo, pretty! That was it, I decided I was doing that icing. 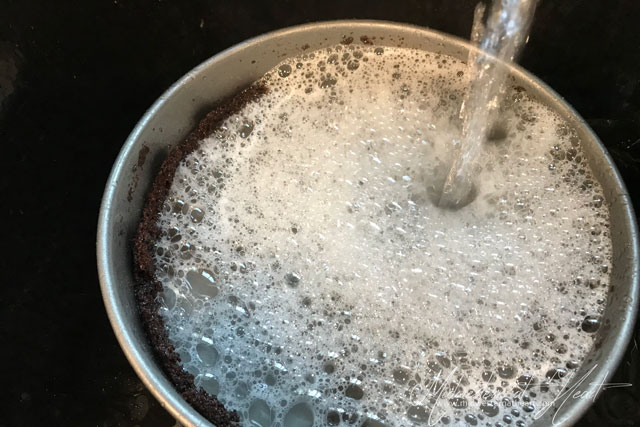 Do you see this picture above. Yeah, that was the result of my first cake attempt. Let’s break it down. Instead of doing a funfetti cake, I decided, in the end, to go with a chocolate cake. Next came the grueling task of finding the chocolate cake recipe to use. I went with my go-to chocolate cake recipe. Let’s just say, major fail. Bummer! I doubled my recipe because normally it only makes a 2 layer cake. I wanted something a little bit taller. I put my first two layers in the oven to bake. They didn’t bake. The outside did, but the middle was still very raw. There was a good probably inch difference between the center and the outside and when I went to turn it out of the pan, totally fell apart on me. I was ready to cry.

Normally this cake is made in a 9×13″ cake pan, so maybe that’s part of my problem… I don’t know. I threw in the towel, threw away the two cake layers that were ruined and dumped out the chocolate cake batter waiting to be baked. 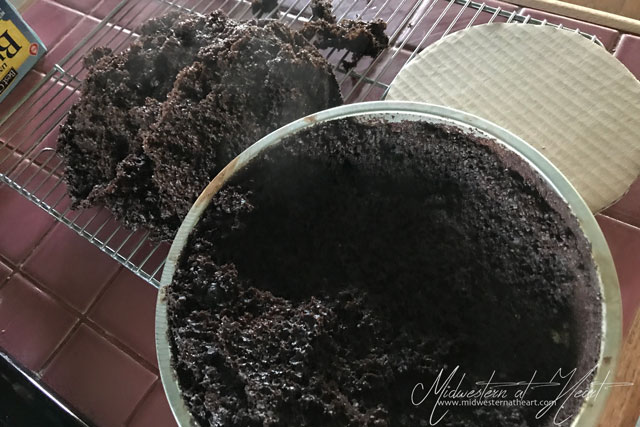 Sometimes it is just easier to cut your losses. I went back to the drawing board and tried to decide what to do. The Stay At Home Chef has a Chocolate Cake recipe that I’ve seen many times going around Facebook so I decided to give it a try. She had a video so I followed along and wished for the best.

How she greases her cake pans… So she put butter on a paper towel, smeared it around the cake pan, placed cocoa powder in, moved that all around, and she was good to go. All three of her layers turned out of the cake pans. Easy enough, right? Right…

My first cake pan I used the stick of butter to smear all around the cake pan. Then placed the cocoa powder in. The second and third pan I put butter on a paper towel like she did. The first cake turned out of the pan. The second and third cake well… the second half turned out and the third… just the middle finally fell out as you can see from the above picture. Note to self… don’t forget the parchment paper on the bottom, it really does help and make a difference. And next time forgo the paper towel and just use the stick of butter in all its glory!

By this point I was ready to just throw in the towel and say, screw a birthday cake altogether. But come on, that was just being a little dramatic. I did, however, throw away cake 2 and 3 because I was so mad. Let’s just say, at this point, there are 4 cake layers in the trash and 2 cake layer batters down the drain.

At this point, I decided to use a cake mix. It would give me 2 layers, I already had one good layer, so I’d get my three layer cake. I went to the pantry to find a cake mix and all I had was German Chocolate. All I could do was shake my head and laugh. I decided to just roll with it.

I pulled the cake mix from the cupboard. Made it, baked it, lined my pans with parchment paper, and had success. Whew! But now I had a dark chocolate layer and 2 German Chocolate layers. I didn’t care. I had cake and that was all that mattered! 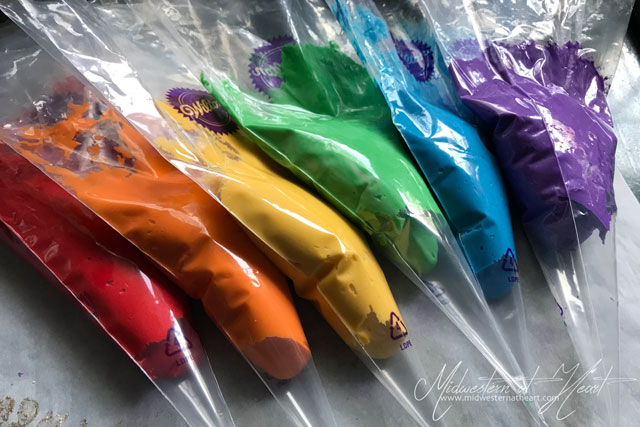 Guys, the cake decorating went smoothly after that. I made up my color icings for the middle. I love the rainbow look. I guess I could mention here that at one point I thought about doing a vanilla cake and just rainbowing my cake layers. But I didn’t, obviously. I laugh because Cupcake Jemma was where I saw the idea for the icing and how to actually accomplish it. She made the comment, when you do this don’t use tips because 6 tips is a lot and nobody has time for that. haha. Just put in the bag, try to cut the tips off the same for each color and pipe like that. Simple enough! And wow, it was pretty! 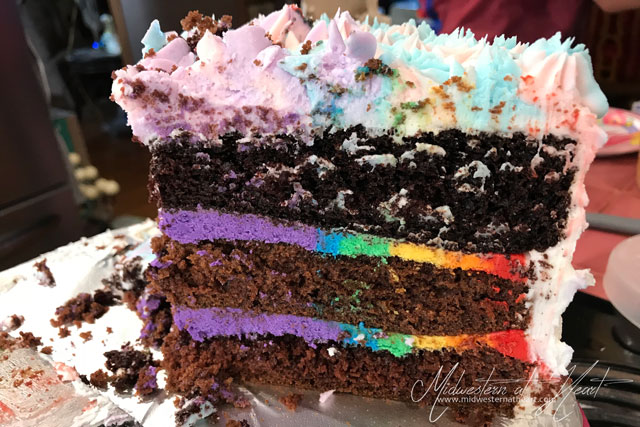 And the cake… Loved it! Yes, as you can see above, my cake layers didn’t match. At that point, I didn’t care! I had a cake and that’s what mattered! And it was tall enough to put the eyes on. To make the flower multicolored main, etc. The horn and the ears were done in fondant. I have a little tip there… let the horn dry before you try to paint it in gold luster dust… it just makes sense. Also, use water to glue the horn to itself and the stick… If you don’t you’ll be yelling at yourself. Trust me there too. You live, you learn. That’s what matters. 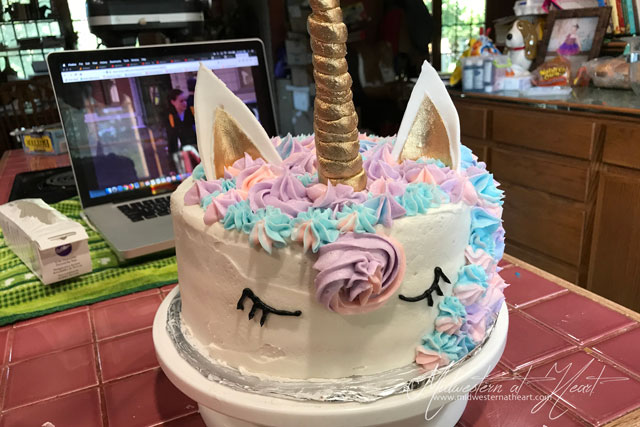