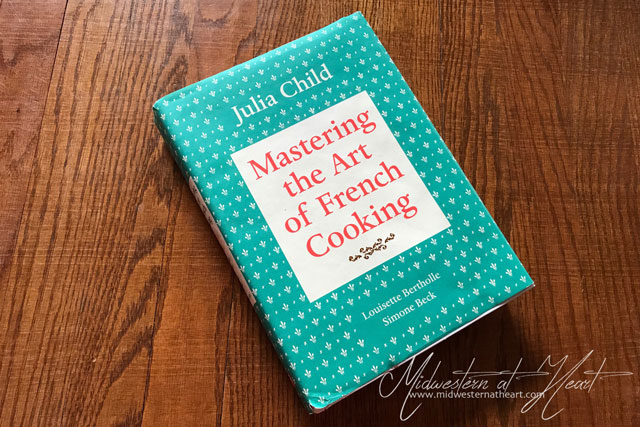 Haha… that title doesn’t really have the same meaning as Julie and Julia. Oh well… it sounds good, right? Please tell me it sounds good. Don’t worry though, I’ll never be able to cook my way through Mastering the Art of French Cooking. Why? Because that book totally intimidates me!

They say that you should do things that scare you every once in a while. Well, I can tell you, this book scares the ever-loving crap out of me. I wish that I was a chef. I want to be one so bad. In fact, I want to write a cookbook. Although recently someone told me that cookbooks are becoming a thing of the past. I guess I would agree with that, but at the same time, look at all the cookbooks on the market. If you walk through a bookstore (which also seems to be becoming extinct) there is usually at least one row if not 2 or 3 filled with cookbooks. Every shape, size, cuisine, and more.

I own more cookbooks than I can recall right now. Some are still packed up from our move over a year ago. That makes me sad. Someday that will change but for now, that move was still a good thing for us…. even though it has been faced with its challenges. Truthfully I should go through my cookbooks and scale back a little maybe. Maybe not. I haven’t fully decided on that thought either.

Mastering the Art of French Cooking. I own it. I pick it up all the time. I think I can do this. Then I realize I may be a more picky eater than I thought I was. Sad but true. I’ve tried to open up my taste pallet (that’s a weird phrase), but I may still be picky.

Julie Powell was approaching 30 when she took on the project. Julia Child was closer to 40 when she attended Culinary school. I’m somewhere in between. Interestingly, they say that everything happens for a reason. You can see how things all fall into place looking back. I guess that’s why they say that hindsight is 20/20. That’s the closest I’ll ever have to have 20/20 vision. My eyesight is terrible… thanks for whoever invented contacts!

But back to thoughts about this project… I want to go to culinary school. At this point, it seems pointless. I actually signed up for culinary classes about 12 or 13 years ago. It seems so weird to say that long ago. It just seems like about 5, but did you realize I’ve been with my husband for almost 10 years. What the heck. Another story for another day. Man, every time I say another story for another day, it has been leading to the next day’s blog post… but I don’t see that happening tomorrow. Sorry…

But I did sign up for classes. I went to the first class. I was so excited. Then the teacher went into a coma and the school couldn’t find him. They canceled the class. You can’t make this stuff up. So I signed up for Cake Decorating classes instead. Cake decorating classes stressed me out. Cakes stress me out. Again, another story for another day.

I can’t guarantee that someday I won’t write one if nothing else than for my family and friends. Hopefully, someone will enjoy it. Heck, maybe someday I’ll even get up the courage to work my way through Mastering the Art of French Cooking. I hope so.

What do you want to do that scares you?