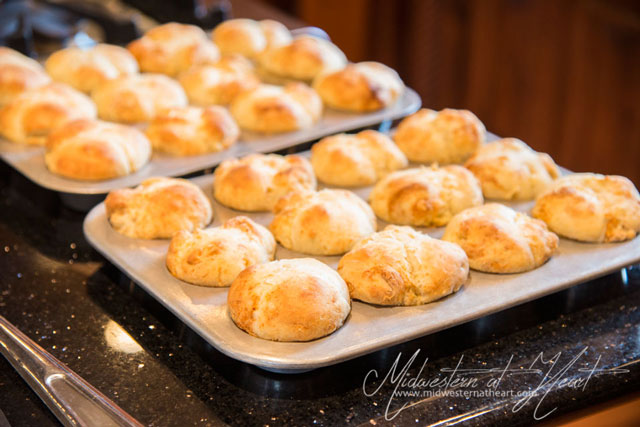 One of my absolute favorite things to do is to cook. I’m pretty calm, cool, and collected when I’m in the kitchen, even under semi stressful situations. So let me paint this picture. Do you see the rolls above? They look pretty good, right? Well, they didn’t always look that way. Oh no…

We celebrated Easter this year with my aunt and uncle down at their house in Oklahoma. By the way, I LOVE my aunt’s kitchen. If someone wants to grant me a wish, I want her kitchen please! Anyway… I was going to make the rolls on Thursday before we went down on Friday, but AC told me to use her kitchen. Probably best, because trying to travel with bread wouldn’t have been all that easy.

So I woke up Saturday morning (we did Easter on Saturday since we had to travel home on Sunday) and started in on the rolls. I chose Pioneer Woman’s Clover Leaf Rolls from her Thanksgiving episode. It’s basically the same dough she uses for her cinnamon rolls. And I absolutely LOVE that dough recipe.

Everything was going according to schedule. Milk, Sugar, and oil on the stove to heat up just below boiling point. Cool off. Add Yeast. Dump mixture into flour, let rise for about an hour. Pull off in walnut sized chunks. Place three to a muffin cup. Let rise second time. Bake. Eat. Enjoy. Yum!

Or so I thought. AC ran out of flour in her jar so I yanked a bag out of the freezer. Mistake potential number 1. Then I spent a little time measuring it while my milk mixture was cooling. When I tested the mixture, it seemed a little cooler than normal. Mistake potential number 2. When I added the milk/yeast mixture to the cold flour, placed a teatowel over it, and went on about my business. I’m sure I allowed them to rise way over an hour because I forgot to set a timer for myself or make note of when I set them aside. When I took that tea towel off, they hadn’t risen, at all. I started to slightly panic. AC has a warming drawer so we started it up, placed them in there, and let them set a little bit to try and proof in there. Still not much rise, but we went with it. Decided if nothing else, we’d have a little bit dense rolls. We could deal with that. After we placed them in the muffin tin, we placed those into the warming drawer for a few minutes to try and speed up the proofing time. Then moment of truth. We baked them. They actually rose in the oven. These rolls might have been a little more dense that normal, but the taste was fantastic.

The rest of the dough

I decided to just make 2 12-muffin pans worth… 24 dinner rolls. I figured I’d leave the dough and go back to it to make cinnamon rolls later. Nothing worse could happen to it.

After we ate lunch, I went back to the dough. It looked like it rose a little, but not much. No biggy. I rolled it out, butter, cinnamon, and sugar/brown sugar. Cut it with dental floss (best trick ever). Placed in a 9×13 pan and stuck it in the oven. The oven was off, just warm from earlier… so I figured it might help them rise? Now, there was about 3 inches or so of the pan showing when I placed the pan in the oven to rise. I wish I’d have taken a picture.

Then hubby and I ran to town. When we got back, I’d been back about 5 minutes when I remembered I put those cinnamon rolls in the oven to proof. I pulled them out and this is what the pan looked like. They actually rose and covered the whole pan. WHAT?!?! 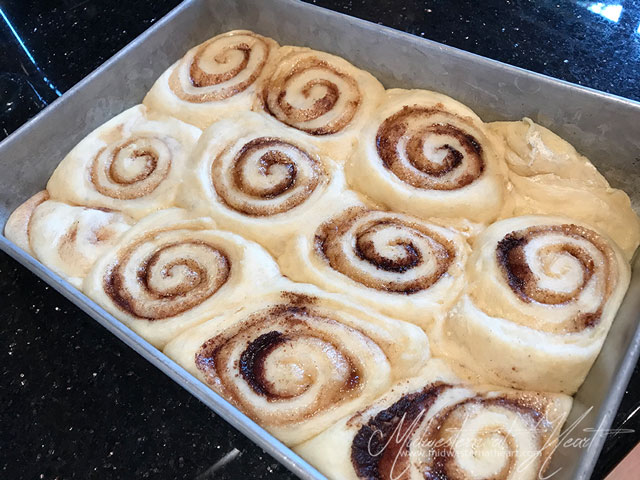 So I started up the oven and baked them off. I should have made icing for them but I didn’t. I was being lazy because while I was impressed they rose, I was still upset about the earlier in the day debacle.

Thoughts on cinnamon rolls? Maybe a little dense but not really. They were good. But they needed that icing. AC suggested warming them up in the microwave and adding a little butter to the top to help. I should try that. But Hello YUM! 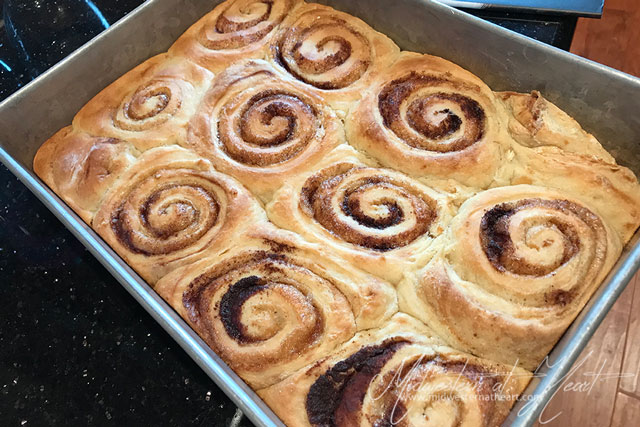