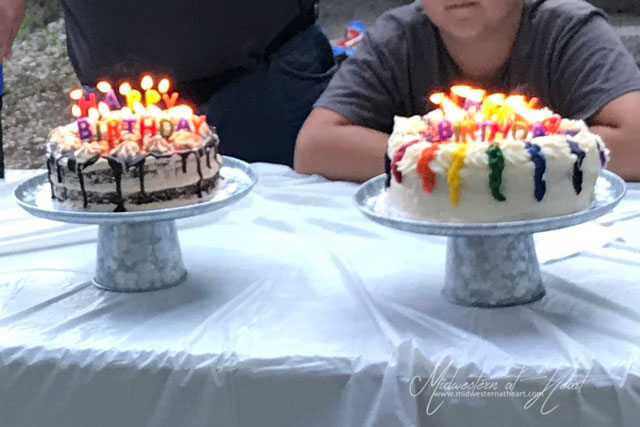 Last week I described the cake on the left of the above picture. If you need a reminder, that’s a Chocolate Dulce de Leche cake. Yum! It really was an exceptional cake and I was extremely pleased with how it turned out. Although… maybe the bright birthday candles on it look weird… who knows.

Right now I’m sitting here watching recorded shows of Best Baker America. Their challenge was a mind-bending cake with Vanilla being present. Looking at my cakes above… I fail. Oh well! haha.

But today, let’s focus on that Funfetti cake on the right. And wow, there’s a lot of thoughts covered above in just a short period of time. haha… some days that’s how my mind goes. My husband jokes that I am the queen of Random! 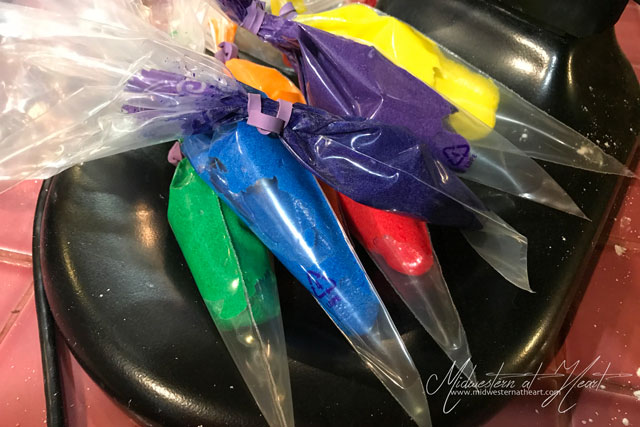 So the challenge with this cake was… We were going camping. Well, what does that mean? It means… camping trailers and small refrigerators. It means not being able to bake (although you could I guess) while camping. It means not having your handy dandy mixer. And it means… if you are camping, you are probably on vacation and who wants to be stuck indoors doing it all? 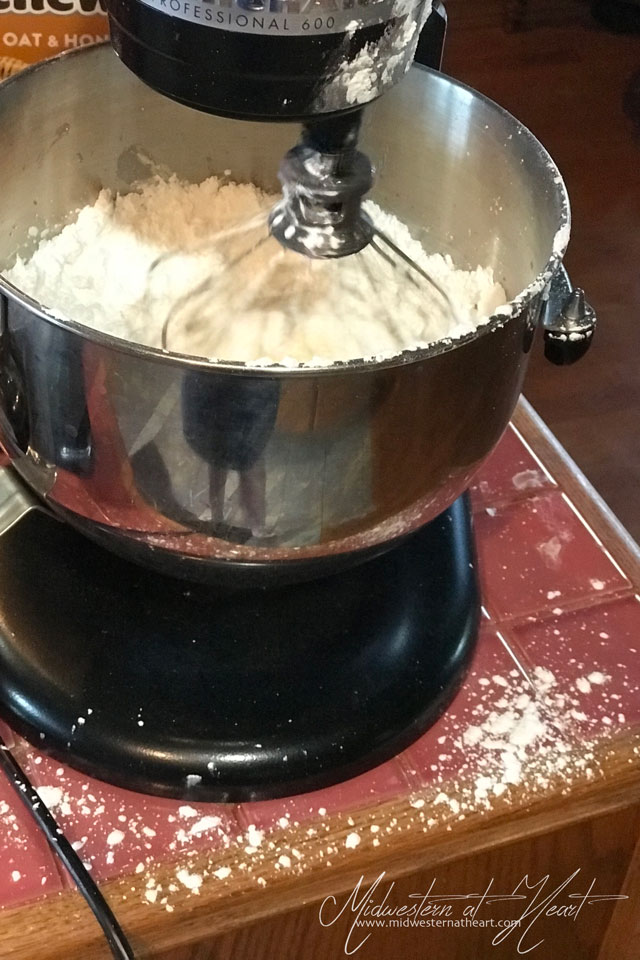 So I decided to do all the pieces on Thursday. I made the buttercream icing and placed it in a bag… Good for camping, bad mistake for trying to get it out to decorate with… Just a thought. Then I scooped a bit aside and made all my beautiful colors for the top. Hubby even helped me and we made Indigo. Because if you remember the colors of the Rainbow… Roy G Biv… Red, Orange, Yellow, Green, Blue, Indigo, and Violet. 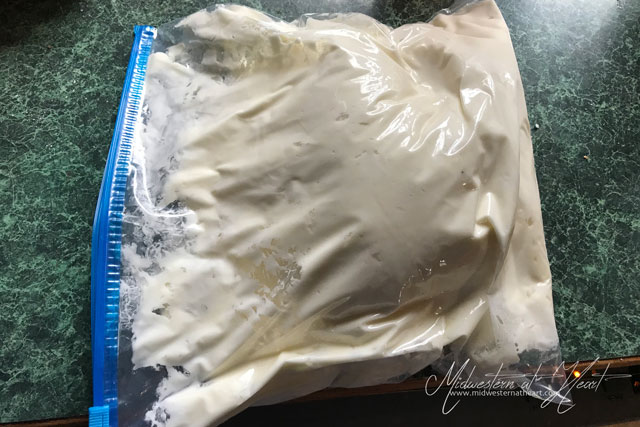 Next, it was time to make the cake. The sprinkles I used had chocolate in them. I can tell you with the finished result… I could taste the Chocolate Sprinkles. But the cake itself… 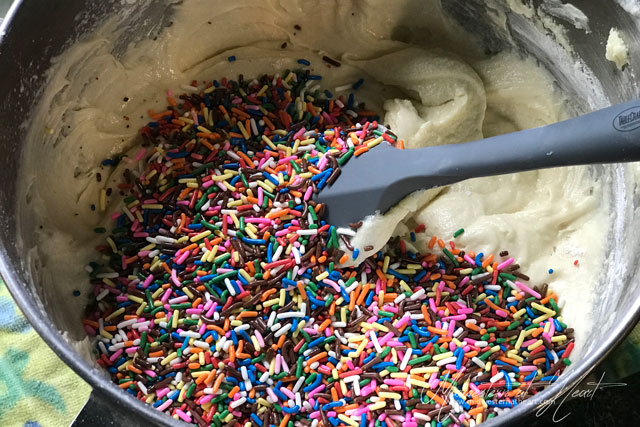 Tasted Amazing. Oh, what’s this you ask? Well… It was supposed to be a three layer cake but…When I went to flip this layer out of the pan, it did this. That meant we got to try it. Especially since this was the first attempt at making this particular cake. Deb’s birthday was the Thursday we did this (we as in Abug and me) so we sent her a chunk of cake over for her birthday. Hey, you need cake on your birthday!! 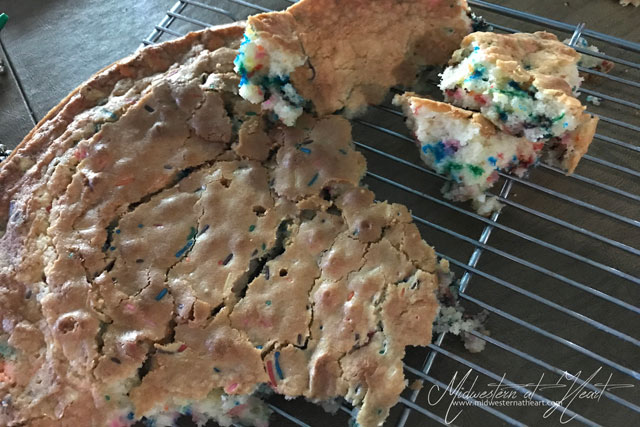 I took cake decorating classes in 2007 or 2008. I can’t quite remember. I used box cake mixes then. Why wouldn’t? Then we learned the elaborate cake decorating techniques. The ones like Chef Duff does. Okay, not that elaborate, but think that way. To be honest, those cakes stressed me out. I got told the other day, yet it isn’t the first time, that I’m a perfectionist. Hmmm… is that a good thing or a bad thing? 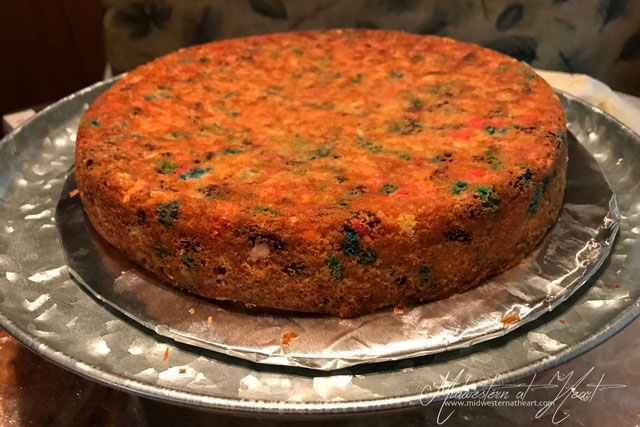 So, do you think assembling a cake is easy? Sure haha. My buttercream was still too cold to spread on the cake. I had it sitting out in the camper for like 30-45 minutes. Oh, I got frustrated. So I finally put it in piping bags and massaged it (that sounds weird) until my hands warmed it up enough to spread on the cake. Whew! Problem diverted. 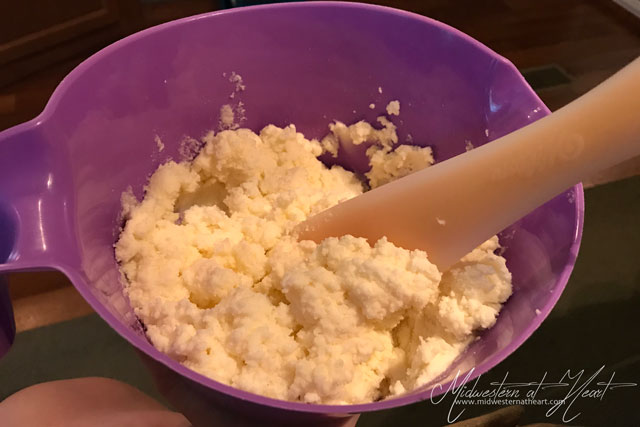 That is…. until the very end… Toward the end when I was putting finishing touches on the cake… of course the icing came to room temperature and tried to fall off the cake. When I took my cake decorating classes, the teacher said to use the cheapo shortening that still had trans fat in it because that helps icing hold its structure. Finding that these days is difficult. That and this particular buttercream icing was all butter. But it was good. Even hubby said that and he never says that about icing. 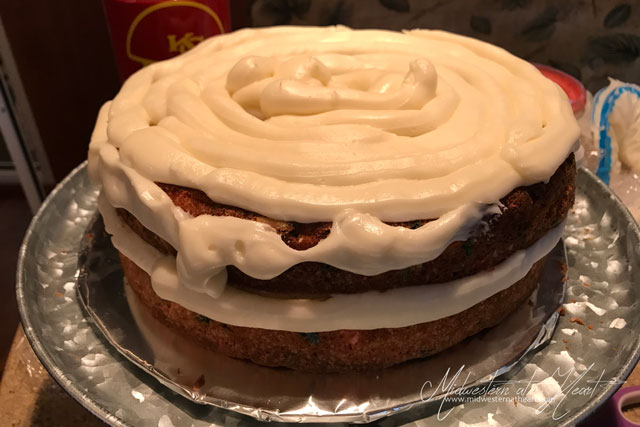 But truth be told…

I was extremely happy with the way this birthday cake turned out and the candles took it to the next level. 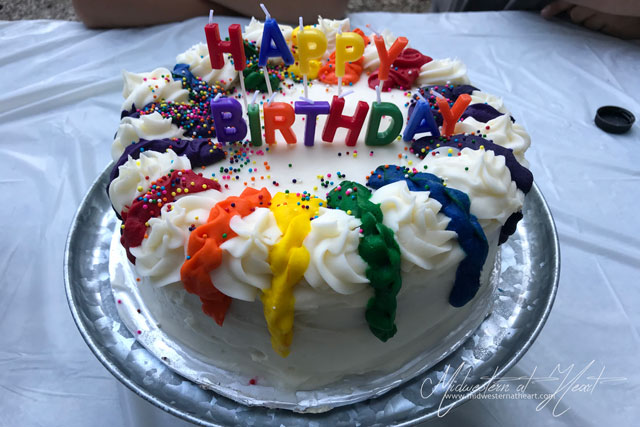 One thought on “Funfetti Birthday Cake”