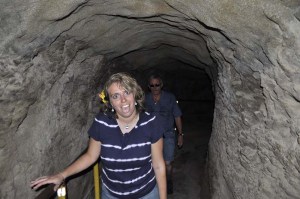 Sorry for the second post today, but I really don’t want Hawaii re-caps to carry over to next week…. So therefore, 2 posts in one day it shall be 🙂

So Thursday morning was our last morning in Hawaii.  It was a sad morning and I won’t deny, I might have pouted a bit even!  We called down to the hotel desk and got a late check out of 1 pm (instead of what the normal 11 am?) since our flight didn’t leave until 6:30 pm and we were leaving for the airport around 4:30.

Then hubby, dad & I headed to the bus stop.  Next destination, Diamond Head.

Truthfully the trek up to the creator was enough to wind you. ha!

If I remember, this was partway up climbing Diamond Head. 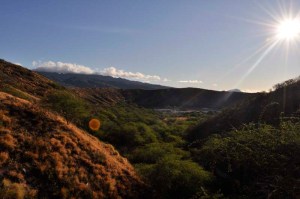 And sometimes as you can tell the ground was uneven and rocky.

There were a few “turn out” points and the views were absolutely stunning!

And steep stairs to climb. 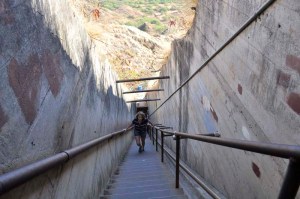 Here you can see the elevation.  Ok, my hometown is 1,004 ft above sea level…. maybe that shows why the goofiness… ya think?

Now there’s a hilarious story about this set of stairs.  Look at the next picture…..

As you saw, we’ve already climbed a bit… then you get to this spiral staircase.  We stopped for a few minutes (as did a lot of people) but it was funny b/c the first people after us to come to these stairs saw the staircase and said, “Oh Sh*t” and continued up.  We busted up laughing, b/c you know that’s what we were thinking when we saw them.  So about a minute later another set of people hit these stairs and their words were, “Oh f*ck” and of course we died laughing again.  I truly think that would have been the place to just sit all day and listen to people.  But these stairs were very deceiving.  You only went up 2 flights, maybe 13-20 steps per flight and you were there.  I’m not exactly sure where the on up part lead to b/c it was roped off. 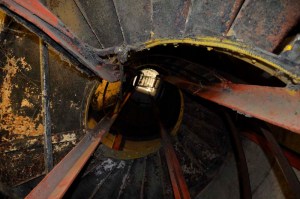 And this is what you see!

So then we stayed up there for a few, got the, I climbed Diamond Head souvenir papers and headed back down.  As we got down and started back for the city bus, a cab driver asked if we needed a ride.  Knowing how it went the day before we were skeptical but he said it’d be about $12.  We were like ok that’ll work so we hopped in his cab.  This cab driver was cool, he chatted with us and when the meeter hit $12 he turned it off.  How awesome was he!

When we got back it was only like 9:30 am.  A little early yet for lunch but still, what can you do, so we wandered around for a bit and then headed back to the beach.

Then we ran back up to our room and grabbed the parents & grandma and headed off to go eat an early lunch.

We ate at Moose McGillycuddy’s.  OMG, so worth it! 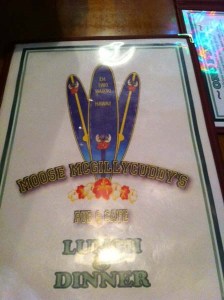 And to honor our last day in Hawaii…. we had a round of Mai Tai’s for the table… even grandma had one… LOL 🙂

But in the end, we wound up calling them Ninjas.  Mom & hubby finished theirs off first and all of the sudden both started acting very… um… goofy.  I was laughing at them and poking fun.  Then I finished mine off and POW it hit me like a freight train. It literally snuck up on you like a Ninja. 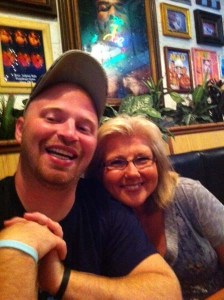 Hubs had the Mahi Mahi.  I’m not sure if I’ve told you this but I don’t like fish.  However, I made him a promise that no matter what he got while we were here in Hawaii, I’d at least try one bite.  Here we are getting close to a month after Hawaii, I still don’t like fish, but I tried a bite of everything he got over there :). 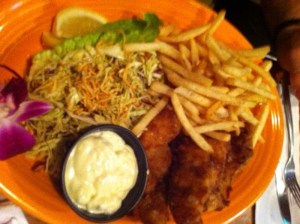 I had my choice narrowed down to 2 and then let the waitress choose for me :).  I’m not big on decision making anyway.  She said try the Kahlua Pig Plate.  OMG, I want more of this.  It didn’t disappoint!  I ate every bit of it!!!

Then we went back to our room, gathered our things, and went and checked out.  By this time it was about 1 pm and our limo back to the airport didn’t come until 4:30 so we had to find something to do to kill time.  Grandma went off and read a book, somewhere, I’m not sure where she wound up.  Mom went shopping and I’m assuming dad must have followed her.  Hubby and I went and sat in the sun for a while trying to stay out of the sand since we’d taken showers before checking out of our hotel room.  Once we finally got hot we stumbled back to the International Market Place and went and got massages.

Then it was time to meet back up, grab our luggage from the bellman, and head for the airport.  At the airport, we grabbed some Cold Stone Creamery and waited to board our flight.

We got on our flight and I teared up.  I so didn’t want to leave!  The real world has so many issues… I liked my vacation life!  So once on the plane, we were first to depart on the runway, and away we went off into the blue sky that was very fastly approaching dark, remember we were flying East where it was already night time.  We got about 200 miles from Honolulu, about 30 minutes, and they still hadn’t turned off the fasten seat belt sign.  Hubby said, um… we should be to cruising altitude.  About that time the pilot or co-pilot came on and said that one of the fuel gauges wasn’t working and we were turning around and heading back to Honolulu.  They didn’t want to not be able to monitor the gas in our left-wing.

As we approached the airport they said, we don’t want you to be alarmed but there will be fire trucks, ambulances, and police sitting on the runway with lights flashing.  This is standard protocol.  We prepare for these types of landings so it should be smooth sailing, but they are there in case of emergency.  I looked at hubby and said huh?  So I didn’t know this, and if you did, well don’t judge me :), but the fuel is carried in the wings, at least of the jet we were on.  If it is too heavy, the jolt when touching down could cause the wings to hit the ground if the jolt is enough and boom, big fire :).  Luckily our pilot did awesome and I’m still here to type this :).

So we stayed on the flight for what seemed like forever while maintenance tried to fix the plane, then they came on and said the plane was being de-commissioned and we got another night courtesy of American Airlines for staying in Honolulu 🙂

A LOT of people were upset.  I was like, um… do you want an all-expense-paid trip to the middle of the Pacific to see if there really are Man-Eating Sharks…  I understand when people have plans, but I’d rather be safe than sorry!  So we deplaned, grabbed our luggage off the carousel, and went to our new hotel, The Ala Moana.

I got luggage patrol and as you can see, there were a bunch of people sitting around waiting to check-in.  Our plane was full :).  A lot of people were in a good mood (ie me) and there were a lot who weren’t. 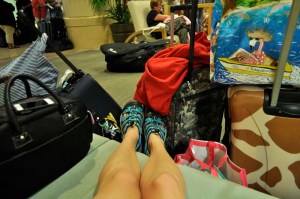 We were on the 29th floor of this hotel.

Entering our new room for the night. 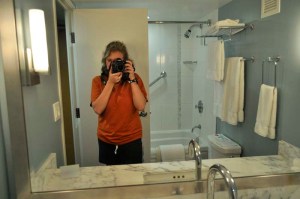 The room itself.  Now the AC didn’t shut off here when you opened the balcony door.

View off the balcony at night.  This hotel was down by Pier 9.

It sure was a beautiful night!

Mom & dad decided they were hungry so they ordered delivery pizza, so technically our LAST night in Honolulu we got to eat pizza at 12:37 am 🙂  I always like to try pizza at least once in a new town… I mean why not!  This was good pizza too! 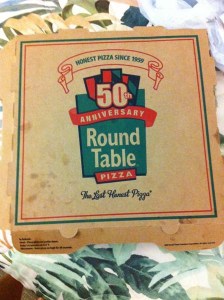 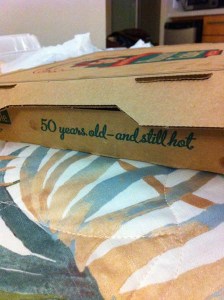 Then we went up to our room and crashed.