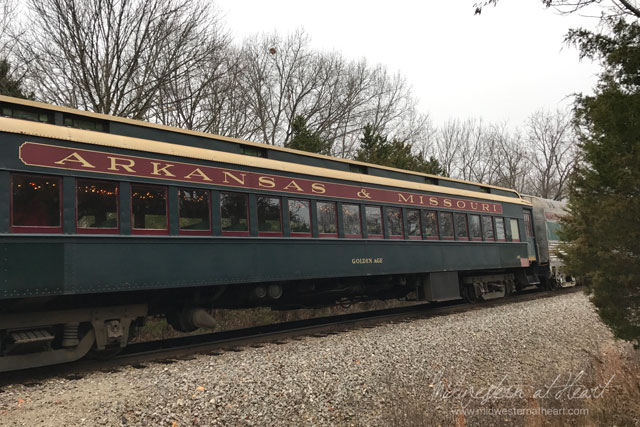 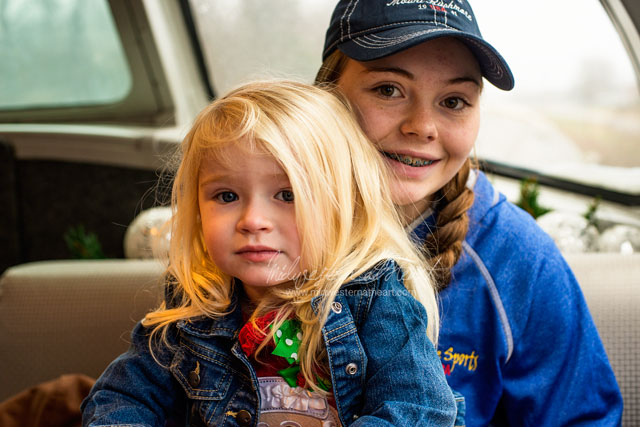 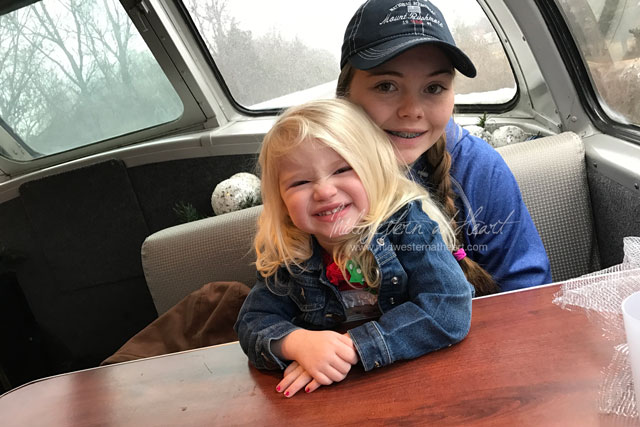 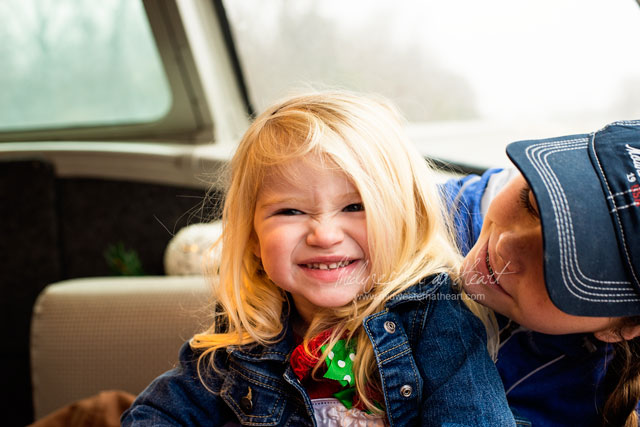 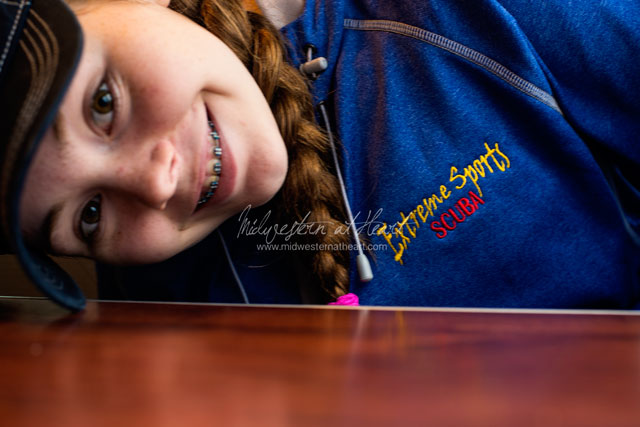 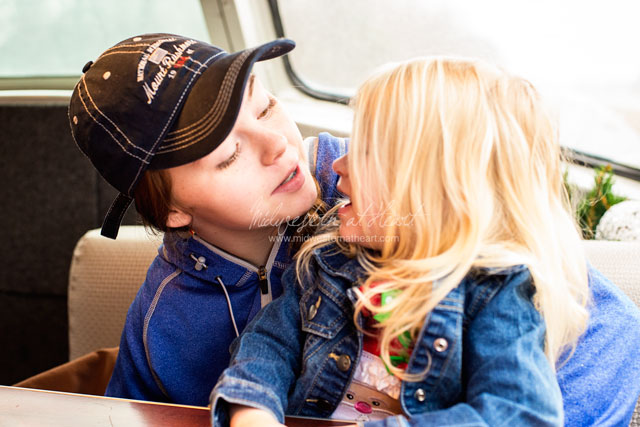 On the train ride down they gave us hot chocolate, a sugar cookie, and even a visit with Santa. When Santa asked Abug what she wanted for Christmas, she responded toys. Well Santa, do you think that is explanation enough? Can you handle that? 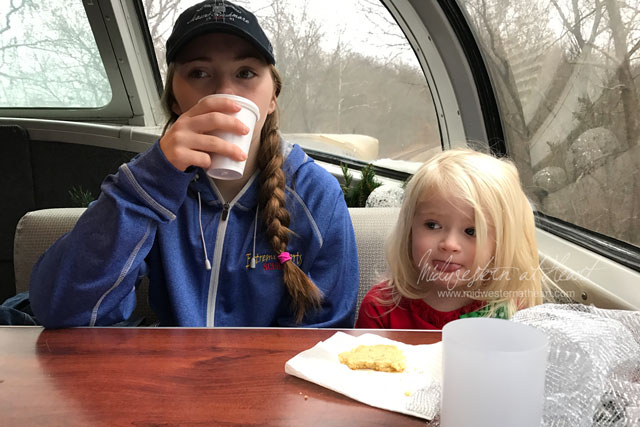 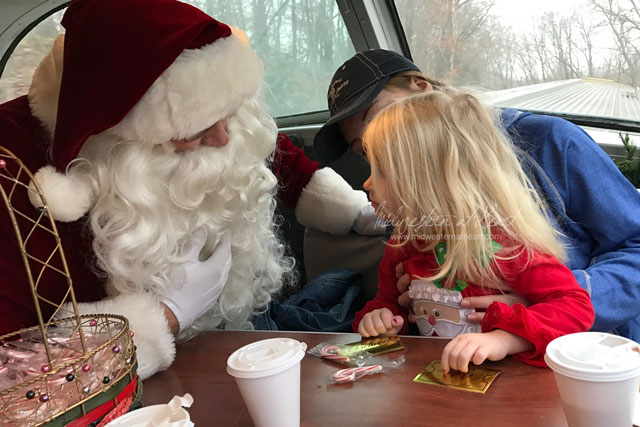 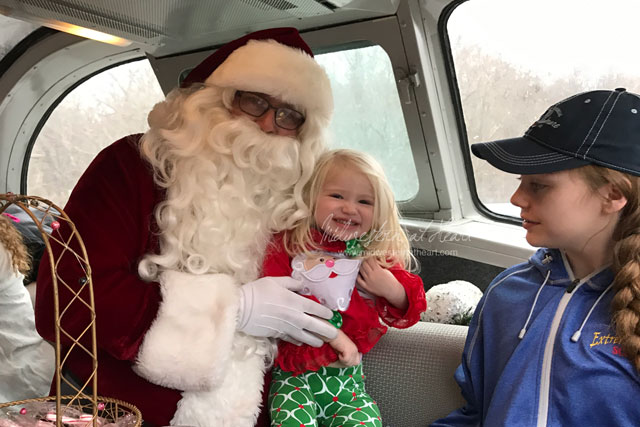 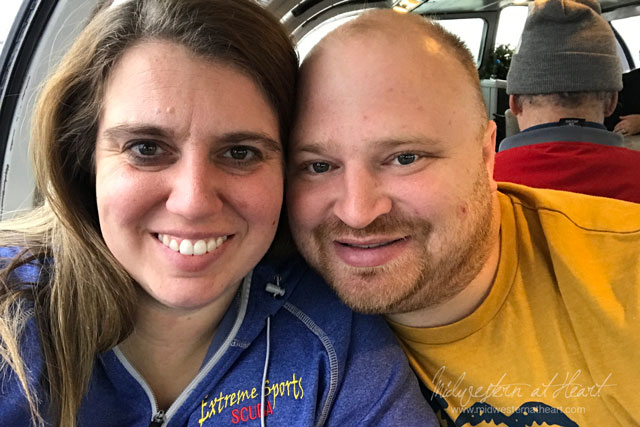 Sadly, we picked the coldest weekend we’ve had so far for this trip. And that morning none of us grabbed a very heavy jacket except hubby, Lucky duck! So walking around in the 19 degree weather, we just zipped Abug up in hubby’s jacket. 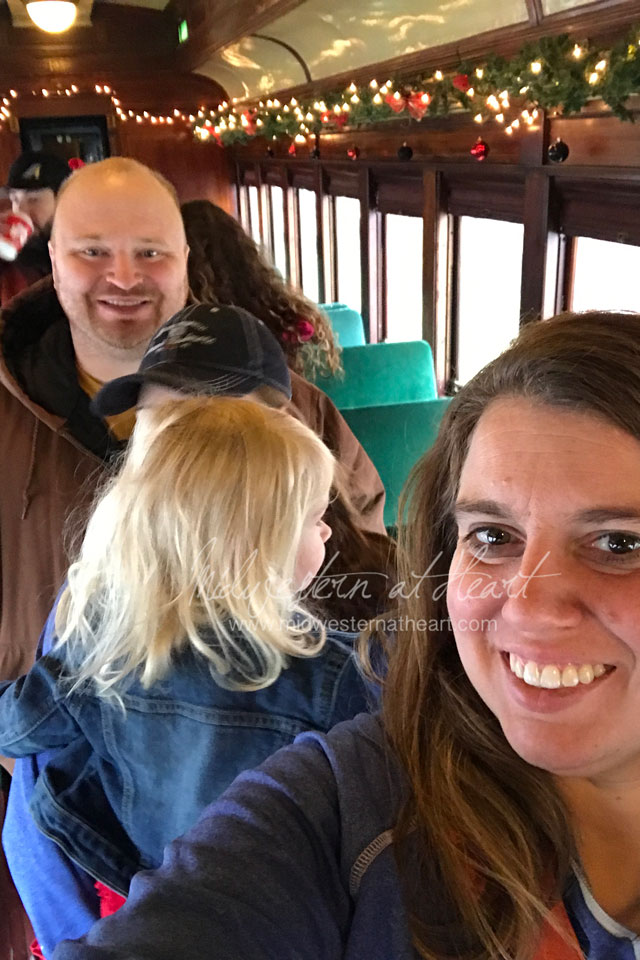 As we were entering the train, our leader was telling us about the different cars. The double decker car is where we rode on the way down and we were up on the second level. This car was built in the 70’s and was meant to go around 70 mph, but they said we’d probably only top out about 45 mph. 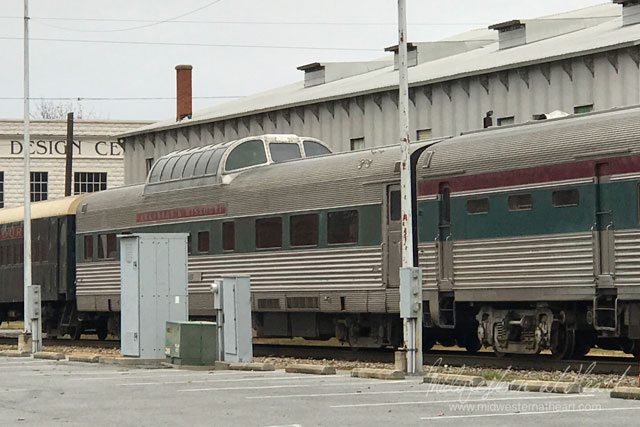 This train was set up where they dropped us off at Rogers. As we were headed back to the train, I noticed there was a Santa inside the train. 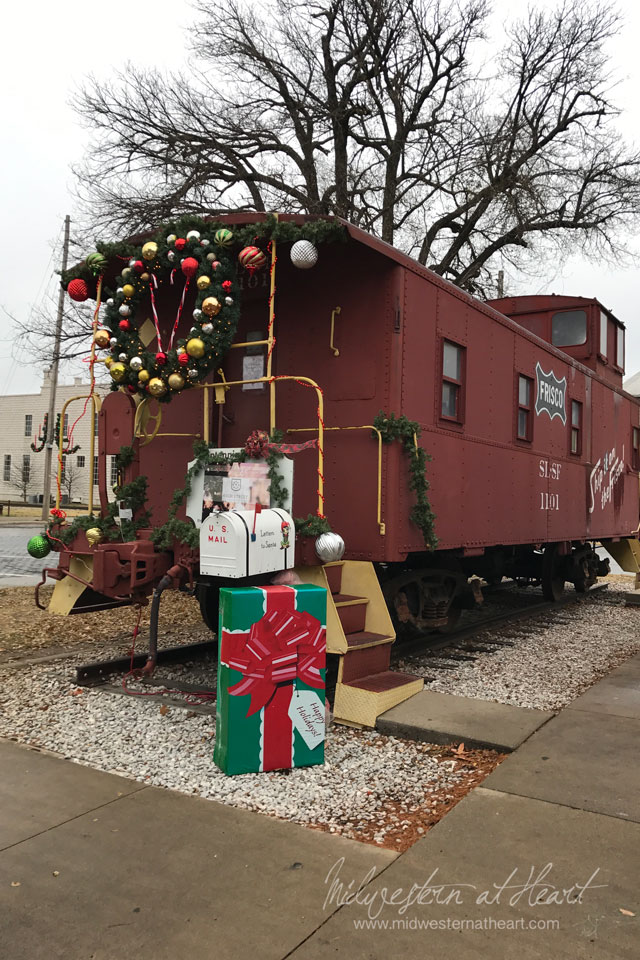 One thing I wanted to point out is they had the fun brick roads like downtown Ft. Worth. Have I ever told you how much I love brick walls, streets, sidewalks, whatever? I want a real old brick wall in my house so bad I can hardly stand it! 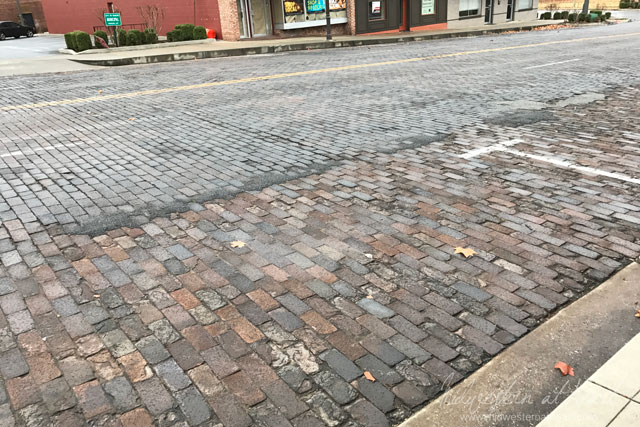 We really didn’t know what to do while we were in Downtown Rogers, it was cold, hardly any stores were open, so we followed our noses to what we thought was food. Turns out we wound up in a store and asked the ladies if they knew where we could find breakfast. They sent us 2 blocks over to Wesner’s Grill. We said, GREAT and away we went. 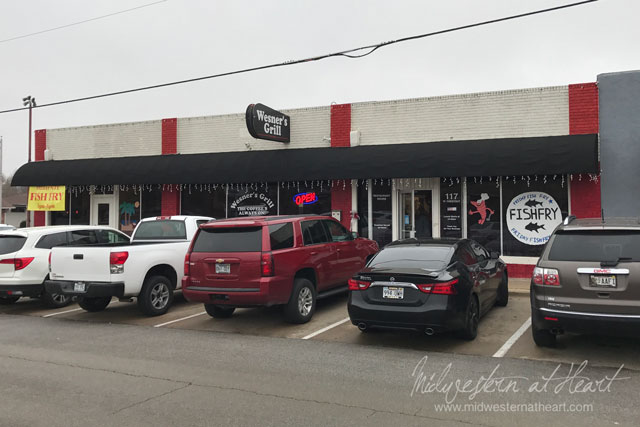 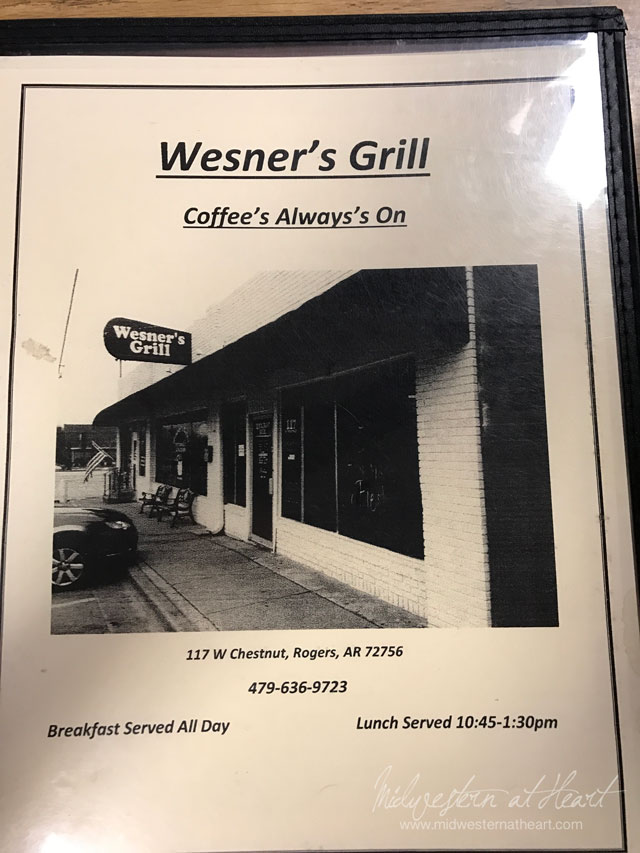 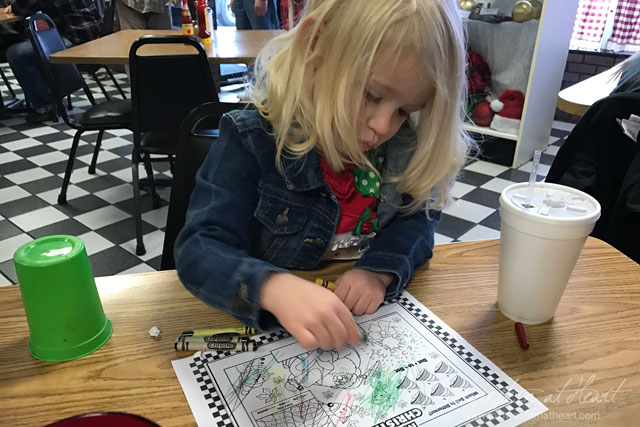 Tbug and I both went with a Western Omelet. It had ham, green bell pepper, onions, and tomatoes. I went with a side of hashbrowns where Tbug went with the grits. Let’s just say YUM! 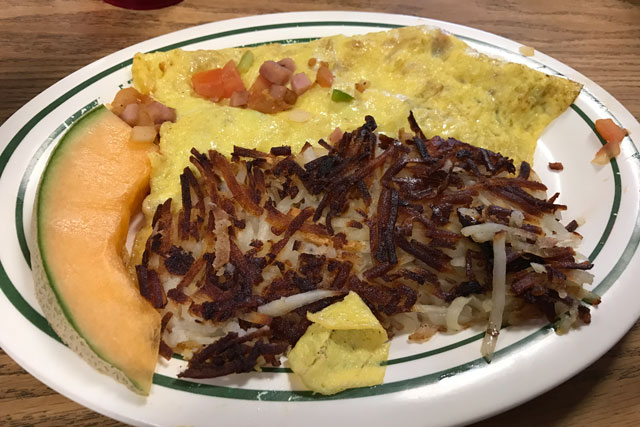 Hubby went with the Slop. A layer of hashbrowns topped with scrambled eggs, bacon, sausage, and ham, then gravy and finally cheese. It wasn’t bad, but hubby said that mine tasted better. He’s not a huge fan of white gravy though (which is kind of news to me….) 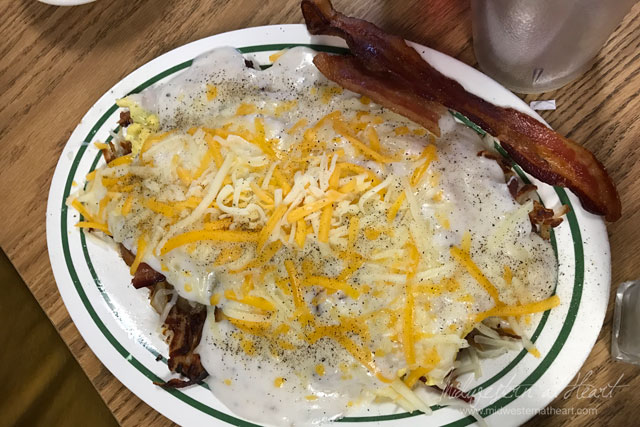 Abug went with the Snowman Pancake with a side of bacon (which I wound up eating because she doesn’t care for bacon). Let’s just say that pancake was AWESOME! I almost wish I’d have gone with that even though mine was excellent! 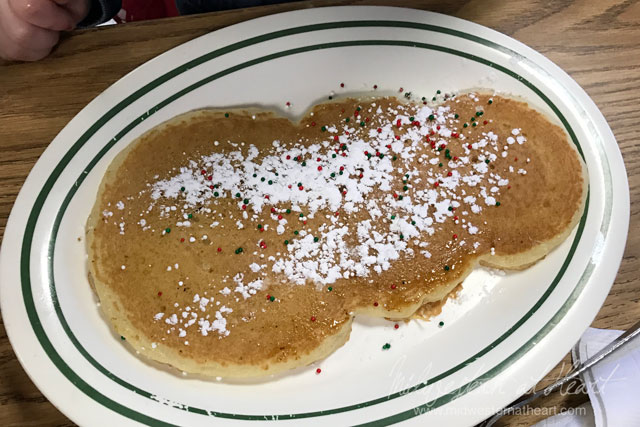 There wasn’t a station or really any enclosed area to stand and wait for the train, so we went back to the shop that sent us to Wesner’s to hang out since it was so cold outside. They had tables and welcomed us in to sit and wait. We could see the train right out their front window. In the store they had like 3 or 4 cats and 2 Basset Hounds. I so wanted to take the Basset Hounds with me. I’m kind of fond of Basset Hounds anyway.

One of the ladies in the store didn’t even know that the Christmas train was doing this and wished they’d have known so they could have collaborated with local businesses for a hosted tour or something. Maybe next year, hopefully! 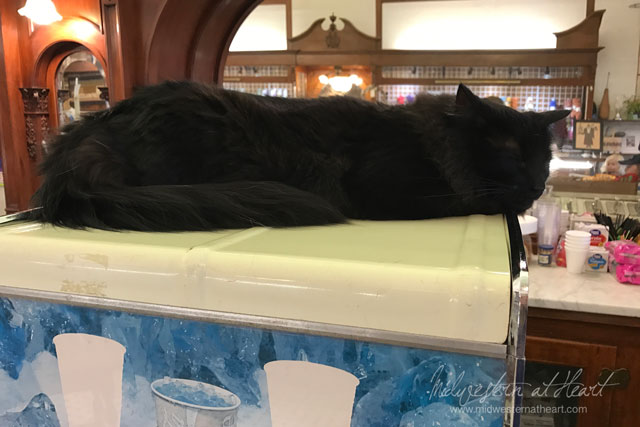 Finally the train came back to get us. 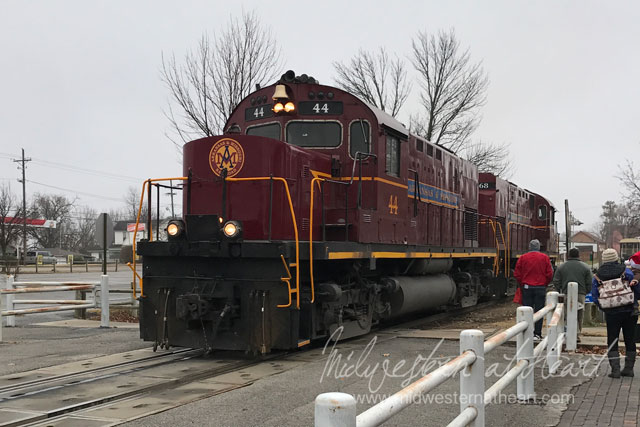 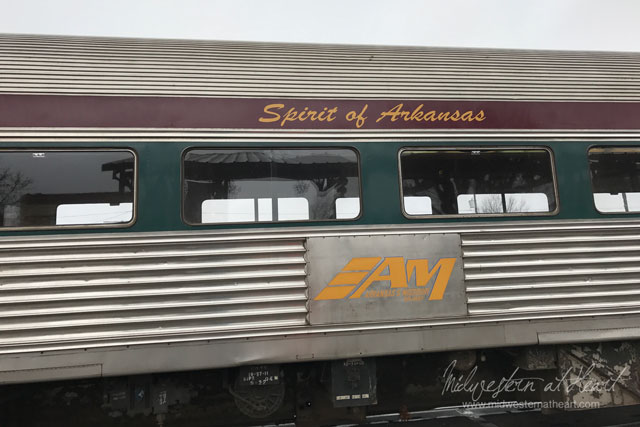 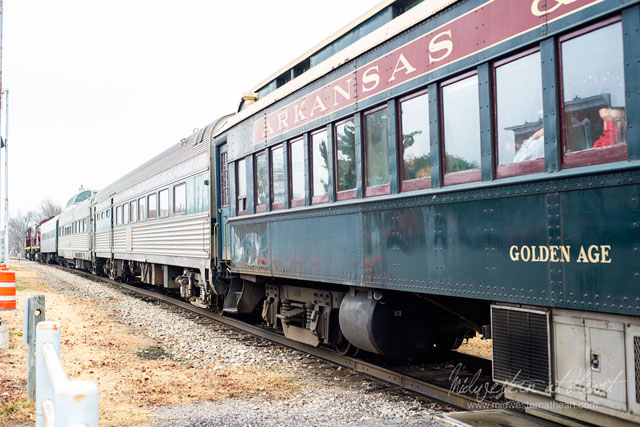 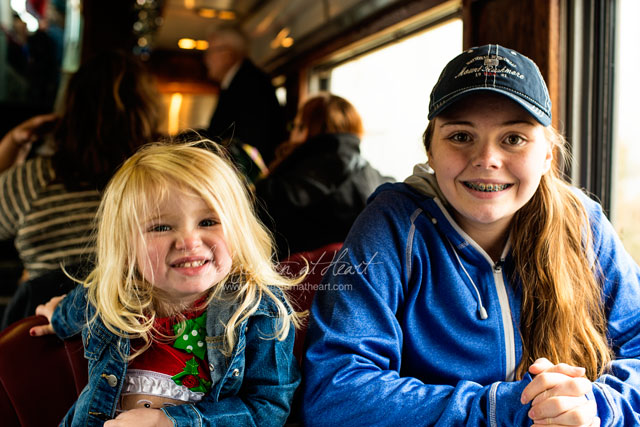 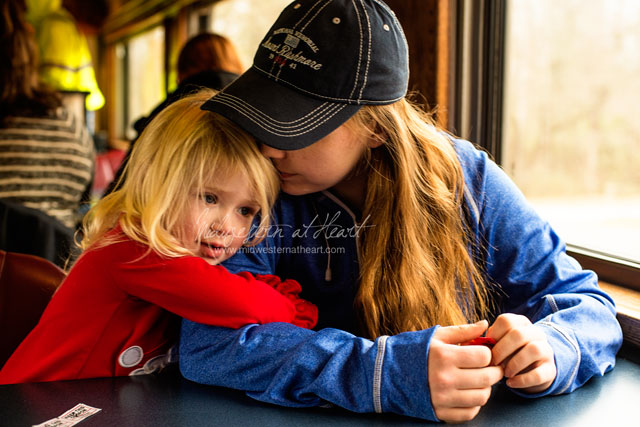 On the way back they gave us more “hot” chocolate (that was luke warm but they told us that it wasn’t hot). 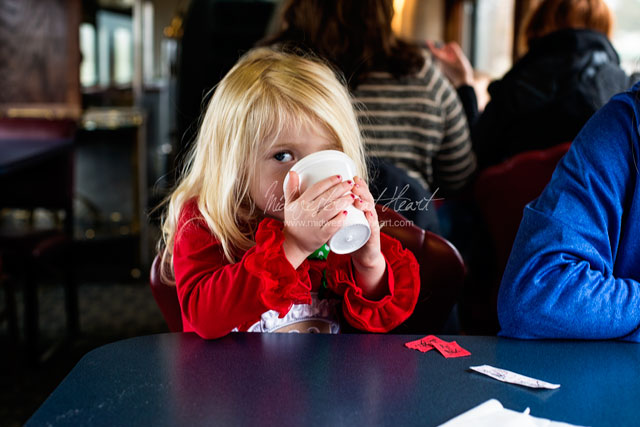 And the best family picture we could get. Abug wouldn’t cooperate…. 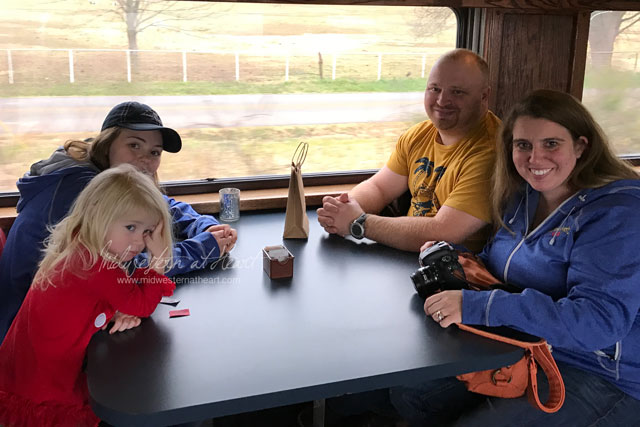 And that was our Christmas train experience. It was a lot of fun! We weren’t sure what to expect, but at the same time I’m not sure this is what I expected, but if we hear about it next year and aren’t busy, we’ll probably go again.

Jump In, the Water's...........
Girls Cookie Day - Part 1
Book Review: Harry Potter and the Order of the Phoenix
Lazy Dawg Days of Summer