Hello Thanksgiving! Truth be told my favorite time of year is between Thanksgiving and New Years. I love the food of Thanksgiving, the fun and reasons for Christmas, the joys that come over the New Year, and then bam, January hits. I’m not a huge fan of January, sorry January, nothing against you and we can still be friends 😀.

Anyway, this year after I have a new found love of decorating sugar cookies, I thought I’d take my stab at Thanksgiving Sugar Cookies. I had no idea what I was going to do with them once they were baked/decorated, but by golly that wasn’t going to stop me. I sent them with my dad to work. He said his co-workers loved them and one even took what was left at the end of the day home. Yey :). Don’t worry, I ate 1 1/2 cookies. They were good 😁. 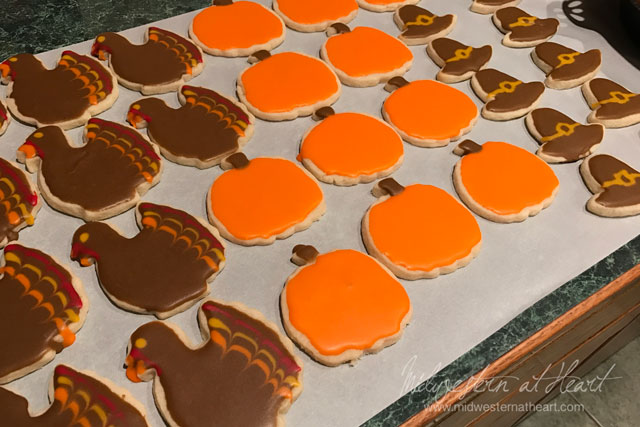 For Thanksgiving dessert, I chose a Cherry Pie. That was my initial thought even though we don’t have any cherries from our old Cherry tree, but then I found them, Sour (aka tart) Cherries at the store. I bought 4 packages. I only needed 1 but put the other 3 in the freezer for a rainy day. And that is a turkey on the top of my pie, not a Chicken. Just clarifying! 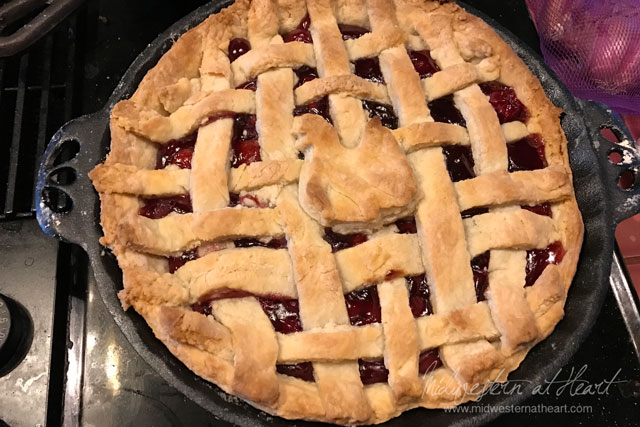 After selling our house and moving in with my parents, I’m back to using my mom’s stove for cooking. Her stove only has 2 burners (normal ovens have 4) so I decided to make our Green Bean Casserole the night before, then just reheat it in the oven day of. We don’t normally have Green Bean Casserole but we’re kind of on a healthy kick here at my house and I thought, well we needed a vegetable and we’ve eaten a lot of green beans so I went on the hunt for a “healthy” green bean casserole to change it up a bit. The one I found didn’t let us down!!

My little sous chef busy at work helping mommy. Right now she loves to cook. I hope I can keep things that way! 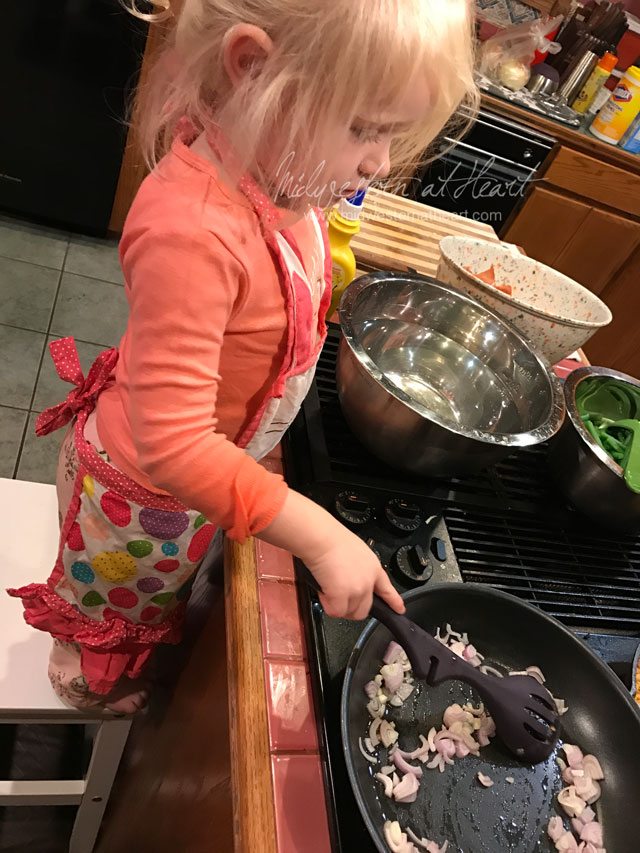 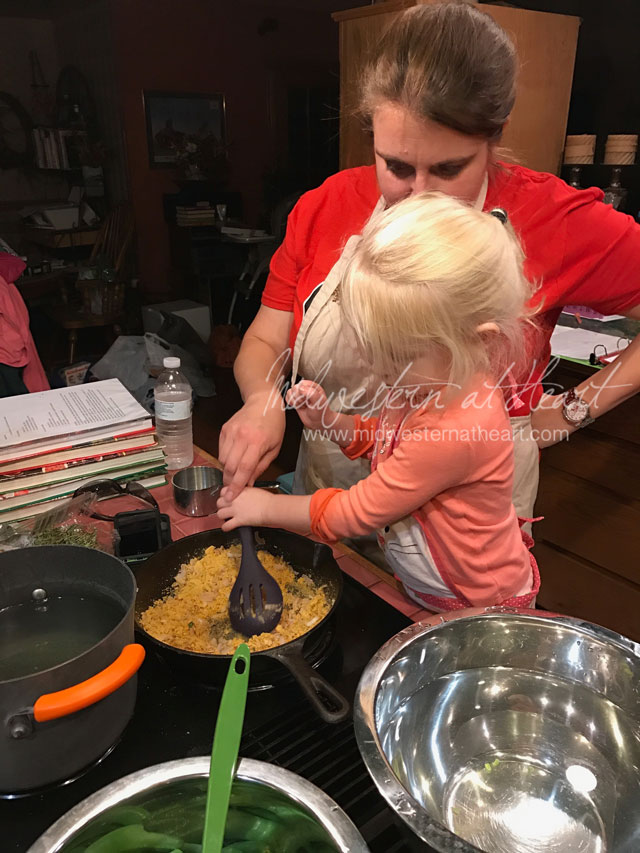 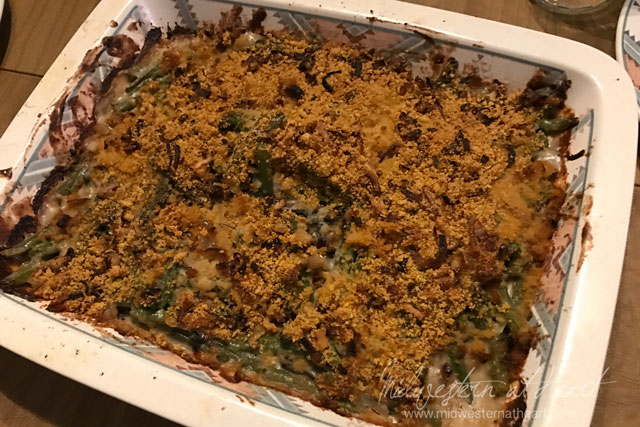 So you might be asking why a pink bow on a roll. Well at Abug’s birthday party my grandma made Resurrection Rolls. Jared and I were discussing on Wednesday the rolls I made at AC’s versus grandma’s and I said that these were better. He told me he needed to try one just to be sure. I told him I’d bring him one with a pink bow. Why a pink bow I have no clue but by golly, he got his roll with the pink bow. My Father-in-Law hosts hubby’s family Thanksgiving usually so after dropping off rolls and Strawberry Jam to Jared, we headed in to town for hubby’s Thanksgiving. When we walked in the door, everyone looked shocked we were there. I’m not sure why. There was so much food, and I did oddly enough didn’t take a picture of it. When we got there Abug was asleep so she sat sleeping in my arms most of the time we were there. When she woke up, she went to playing with the other little kids and I made my rounds, but I didn’t take any pictures. Weird, I know. Not sure anyone else took pictures either…. 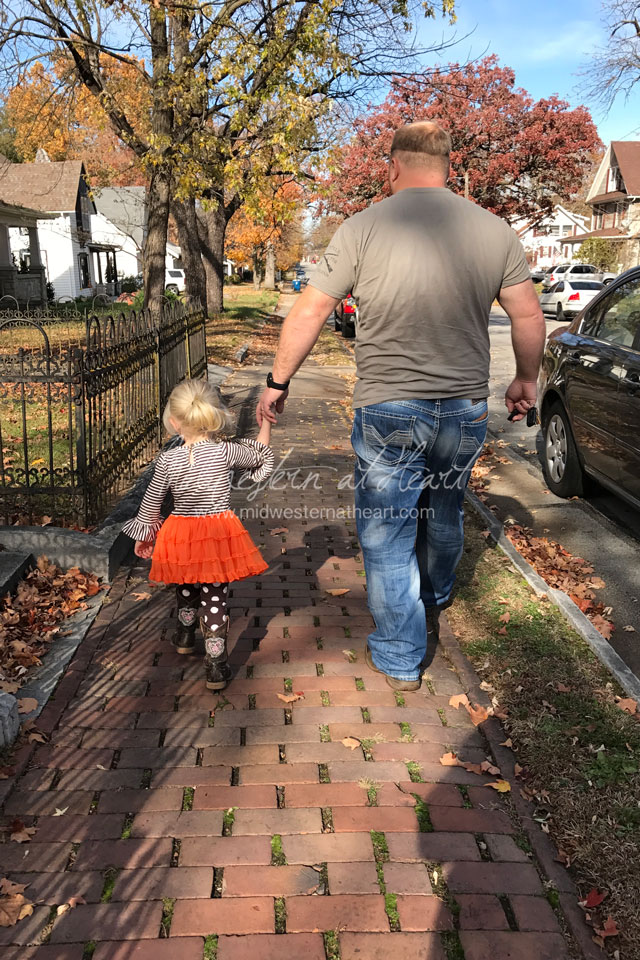 We needed to be home by 2 at the latest to put our turkey in the oven to cook. Hubby came up with his own concoction this year to cook the turkey. It was so awesome. That on top, that’s apple sauce. Yup, he coated the turkey in apple sauce. It was so juicy. 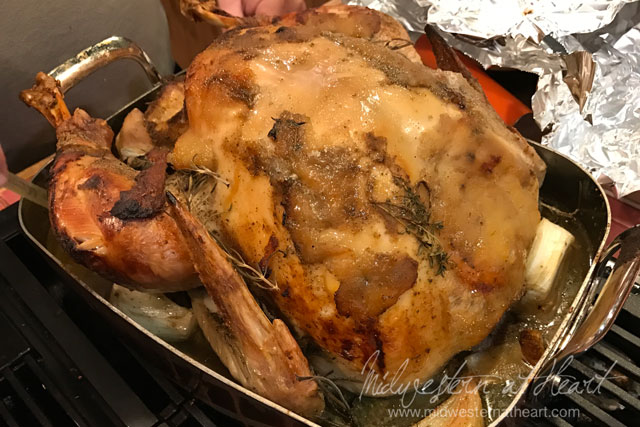 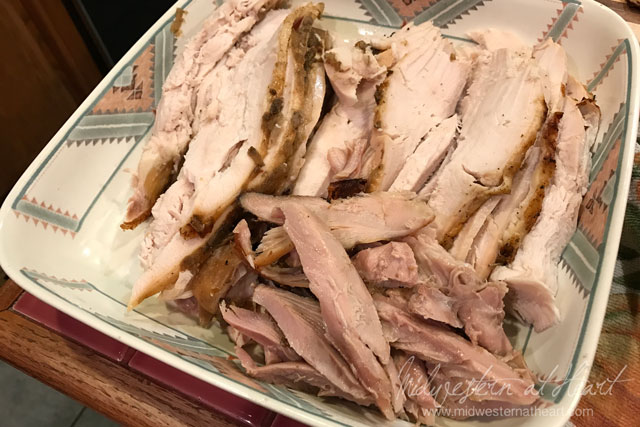 After we got the turkey in the oven, we were kind of twiddling our thumbs like usual. There wasn’t a whole lot to do right away so we decided to go saddle up Kansas and go for a ride. Abug didn’t object. 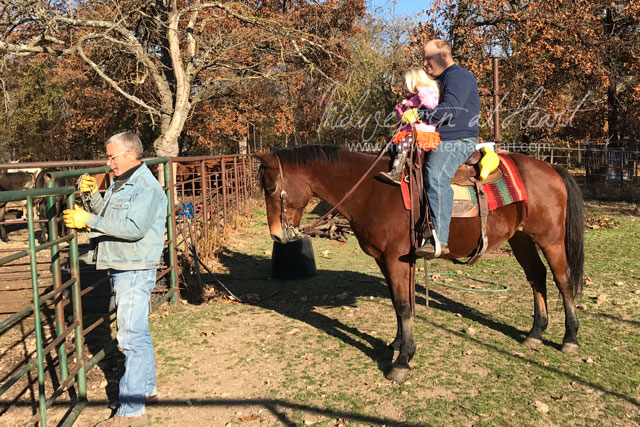 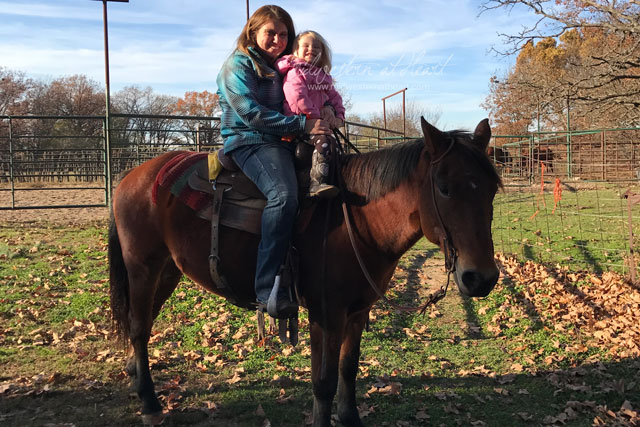 While we were out playing with the horses, we went ahead and weaned this years colts. 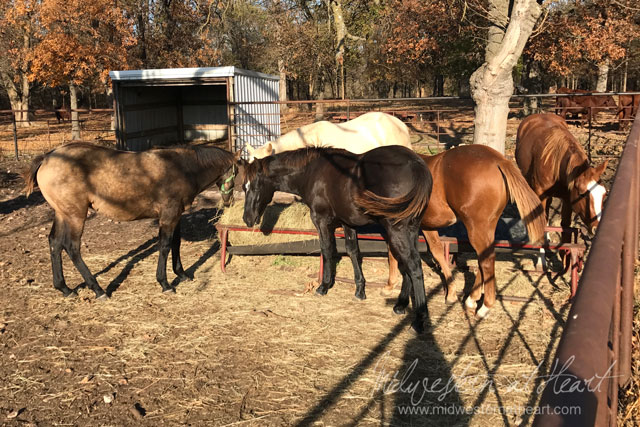 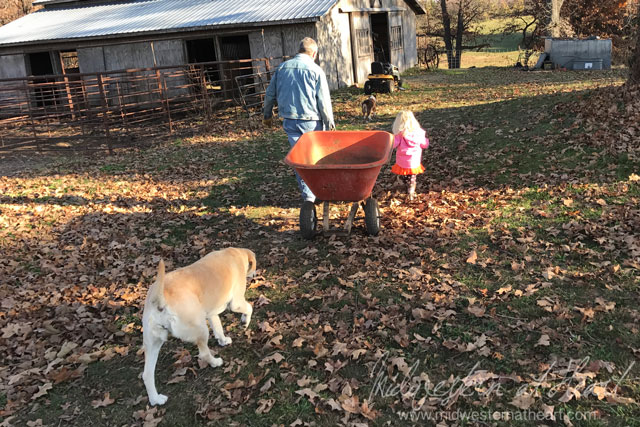 I was trying to be healthy so we had a Caesar Salad. It’s out of a bag mix. I went all out huh… haha. 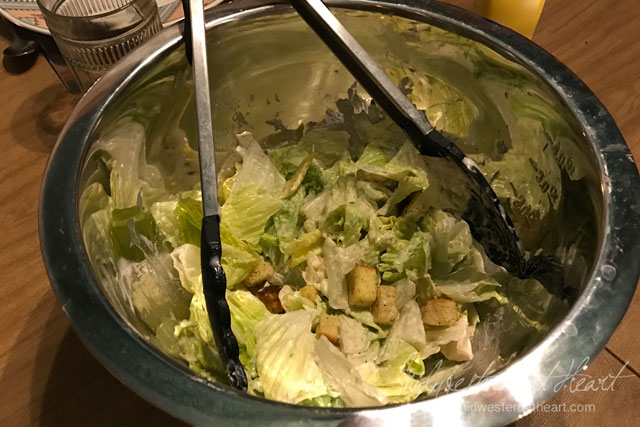 Did you see the Cauliflower stuffing going around Facebook? We made it and HOLY COW it was so scrumptious. 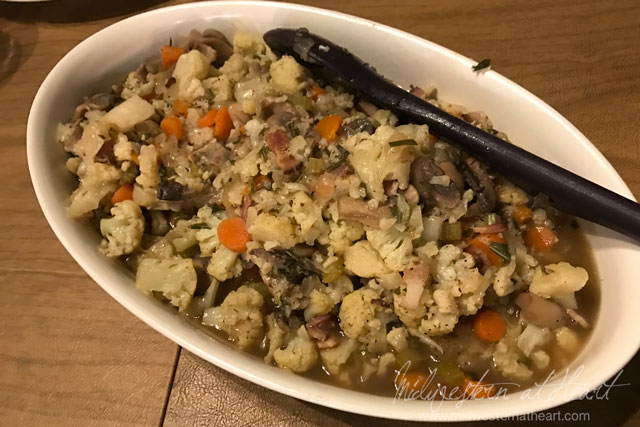 Again, I mentioned trying to be healthy eating so I found a healthy loaded mashed potato bake. I mean, come on you need mashed potatoes on Thanksgiving, right? 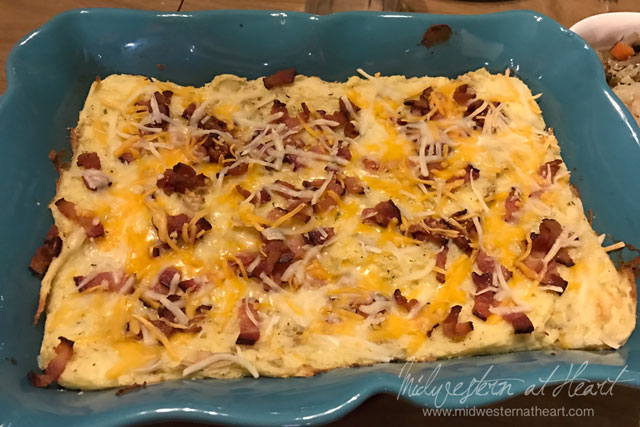 And these rolls. That’s all. Sadly I burned this batch a little bit, but they were still awesome. I made Cinnamon Honey Butter to go along with it plus Grandma’s Strawberry Jam. 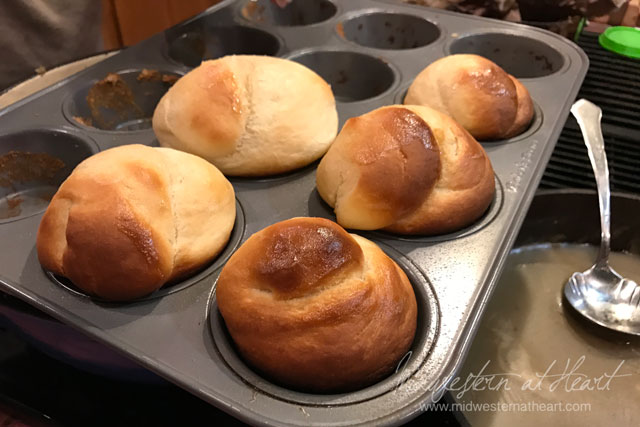 After dinner Abug and I played with Snapchat to entertain ourselves for a while. Then we went to the basement and watched Hallmark movies with daddy. 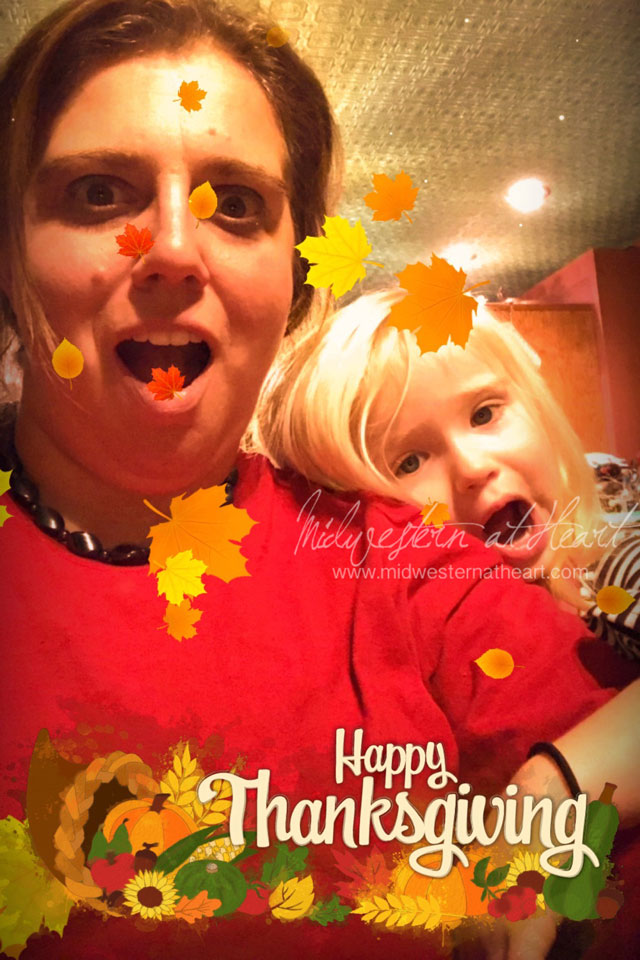 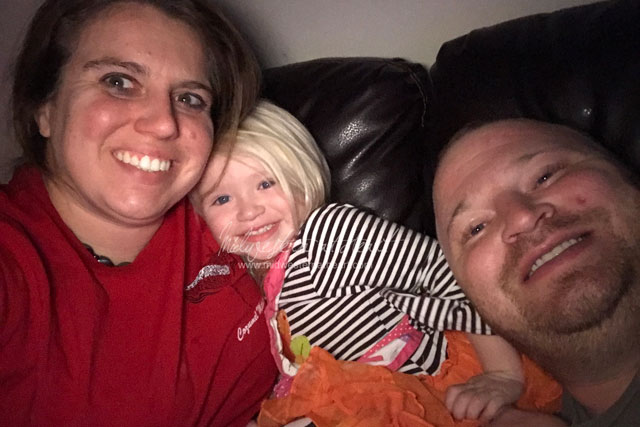 And that was our Thanksgiving. I love this family time!

Hay Season 2014
It Looks Like a Christmas Tree
Happy Thanksgiving
One Year ago... Part 23