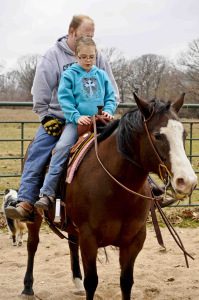 Do you want to know why?

That was the first time I experienced a C-section on one of my ewes.

About the 4th grade, I conned my parents into enrolling me in 4-H.  4-H wasn’t my favorite thing, but I wanted to be more involved with animals and being able to show, plus it’s what all the cool kids were doing.  In 4-H you can take on lots of different “projects” from animals to experiments to sewing & even cooking.  There are some unlimited possibilities there.  My dad and I debated long and hard, yes even in the 4th grade, because I wanted to show cattle.  In the end, I lost the battle and stuck with what I knew best… horses.

Then once 9th grade hit, FFA was in the realm of possibilities, and you betcha I joined.  I was excited about FFA, much more so than I was about 4-H.  In FFA you have SAE’s (Supervised Agricultural Experiences) projects.  So my mom figured I would stick with what I knew best, horses.  Little did my parents know, I still wanted to show cattle.  Again I lost that battle, we’d just moved to our “new house” and all we had was a horse barn with a 12×12 box stall, and “Nicole, a cow can’t live in a box stall.” Plus my dad traveled a lot for work.  In the end, we all agreed upon sheep.  Little did my parents know at one point in my sheep career I’d have 78 head of sheep, but that’s a little off subject.

So in the first few years of raising sheep, we lambed out sheep.  Usually, we had to help pull lambs a few times but the first ewe that ever had to have a c-section was on a morning when I had to be at school, so my dad and the vet took care of it.  I came home to a set of triplets.  A few weeks later, March 1st, 2001 (it was a Thursday night btw in case you wondered, yeah, that’s how much I remember this date, in fact, I had a History test the next day so I should have been home studying…. don’t worry I did get an A on that test in case you wondered) I got home from school and went out to do chores and noticed I had a ewe about to lamb.  Long story short we decided the ewe needed the assistance of a vet via possible c-section.

In the end, the ewe needed the C-section and I was standing there holding the ewe.  They had to shave her wool off her belly, I was fine, and I couldn’t see anything, but the minute they cut into her I about fell to the ground.  I wound up going outside and sitting with my head between my knees until the pounding in my brain quit.

Now jump forward 10 years (not quite to the day).

About a month ago or so hubs received a text message from Tbug’s mom that said Tbug informed her she didn’t want to be a vet because she “didn’t want to stick her arm in an animals butt.”  Of course, we all got a good laugh about that.

So if you remember a while back I received a free horse breeding.  So Saturday we had to take that mare to the vet for a pre-breeding exam as well as we took another one to have her preg checked (hoping she was bred, but no such luck, just a big hay belly).  Tbug was with us so we loaded her up in the truck and she went along too. (although later she told us she’d have rather stayed with grandma… LOL)

She wasn’t too sure she wanted to be there, but she did awesomely.  For a bit, she almost looked pale white and I kept reminding her not to lock her knees because I didn’t want her to pass out.  I even told her to sit on the ground if she needed too.  Obviously for a vet to do a preg check and a pre-breeding exam they have to take the ultrasound machine up the rear so they can check out the uterus and ovaries.  I even convinced Tbug to walk back and stand in front of my dad and to the right of her dad (the mare was on the left) & the vet and she looked at the ultrasound tv machine while listening to the vet talking about the insides of the mare.  But if someone moved and she thought she might see something she was out of there and had to be coaxed back over.

Truly, farm kids get exposed to some “interesting” things at very young ages… LOL.  Hopefully, she hasn’t been scarred for life.

and I’ll leave you on that note with a picture.

Popsicles
Friday Five
Big News!!!
This Cold Stuff is For the Birds!

0 thoughts on “Farm Kids are a Different Breed”