So far, every year we’ve made it a point to take Abug to a corn patch; this year was no different. The funny thing is we’ve gone to a different one each year… but we may have found the one we’ll continue on with… maybe. The one we went to this year was pretty darn awesome!

But let’s back up just a bit. I made it a point we NEEDED to go either this weekend or the weekend before Halloween because otherwise we had too much planned and wouldn’t make it, so we went the 15th.

We met up with Jared and Karen for lunch that day and then went to Exeter, MO, via Rogers, AR. We ate lunch in Neosho, drove to Rogers, and then headed to Exeter. Sometimes our crew doesn’t always make sense, but we decided to go to the Williams Sonoma down in Rogers before heading to the corn maze.

Abug slept all the way to Rogers. When we got out, daddy grabbed her and her diaper leaked all over her skirt and his shirt. Yuck… lol. Don’t worry, I got some on me too. Luckily this is a shopping center so he ran to JC Penney for a new/clean shirt, we cleaned up in a bathroom, and then went to Crazy 8 to get the buglet some new clothes. Whew!

From there we headed to Exeter and that’s where our story really begins :).

We got there and bought our armbands. Abug grabbed my arm and immediately drug me to the zipline. Sadly she is too little for the zipline so off we went to the slide. I’ll bet we spent most of our time at the slide, but we convinced her to leave the slide and go to the little tricycle track for those 8 and under. She still hasn’t mastered riding a tricycle so daddy walked around the track with her. 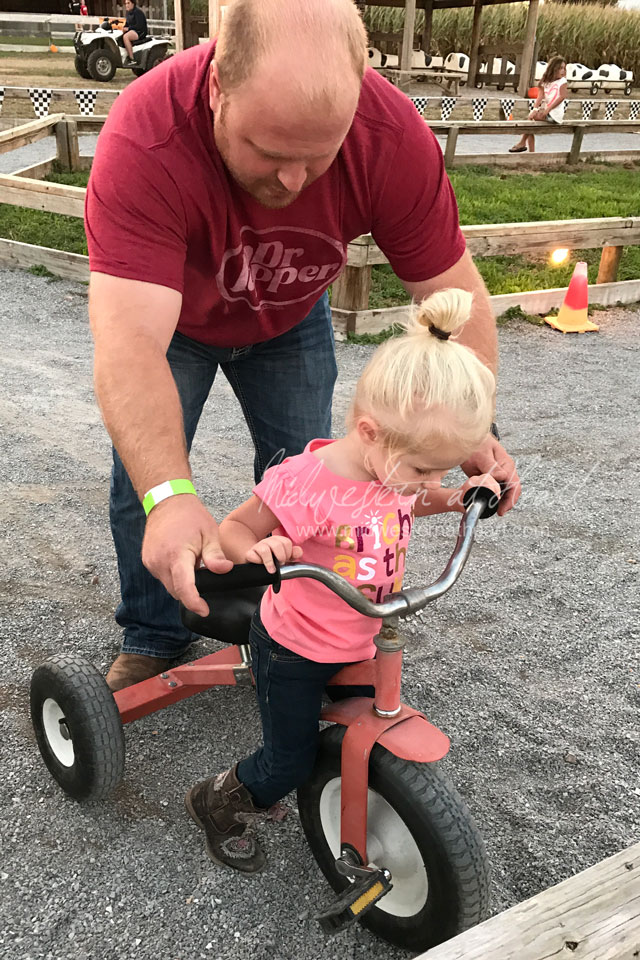 They had a little train ride for the kids. They were supposed to stay seated the whole time. Wouldn’t you know, mine would be the one not to listen and when they came back she was standing. I appreciate the gal who was driving because she kept a close eye on all the kids and I apologize that Abug didn’t stay seated. 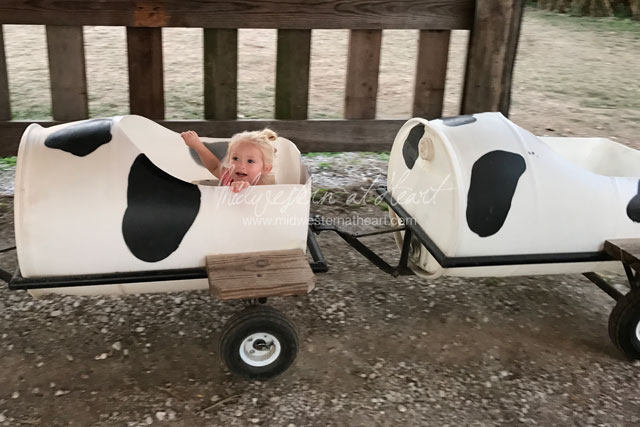 Then we went through the corn maze. At 7 pm it became a haunted corn maze. Now I’m not big on haunted house type things so I was a little on the jumpy side. At one point hubby was just behind me, jumped and grabbed me, and yelled Boogy Boogy Boogy. I’m pretty sure I jumped as high as the corn stalks. Since then, Abug randomly yells Boogy Boogy Boogy at me. It’s funny and cute. 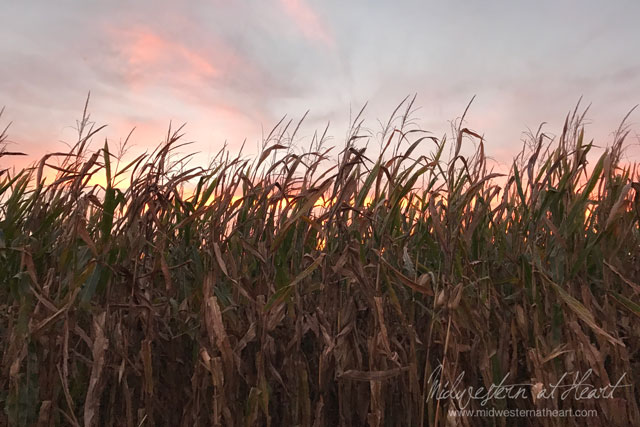 It was either a full moon or pretty darn close. The moonrise was gorgeous too! This is an iPhone picture so it doesn’t do it justice but was it gorgeous! 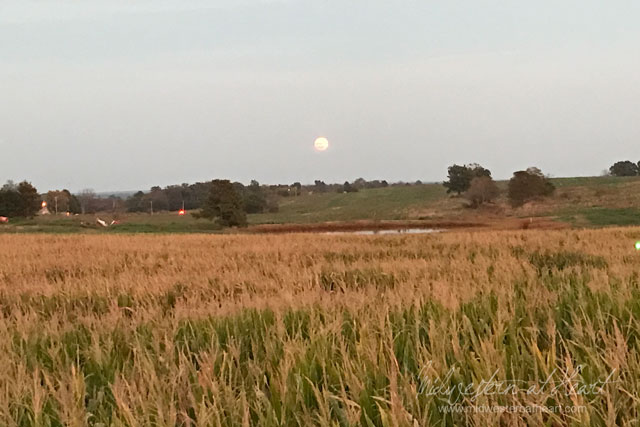 After we got out of the corn maze hubby and Abug shot paintballs for a minute while I entertained myself shooting the moon. I’m telling you, it was GORGEOUS! 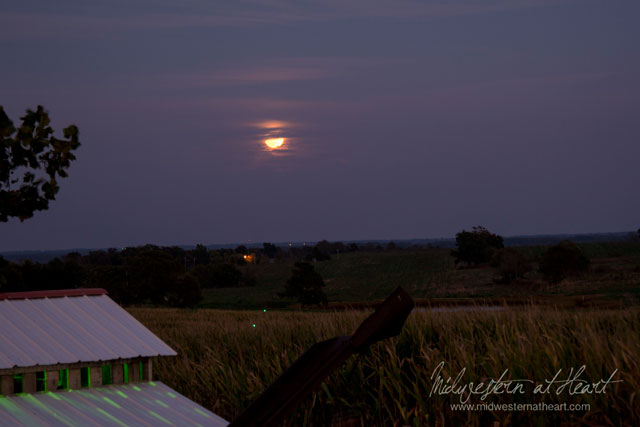 From there we took Abug over to get her face painted. This is her first time. She sat there patiently, but as we were leaving that night she was frustrated with the paint on her face and kept trying to wipe it off on my hand. 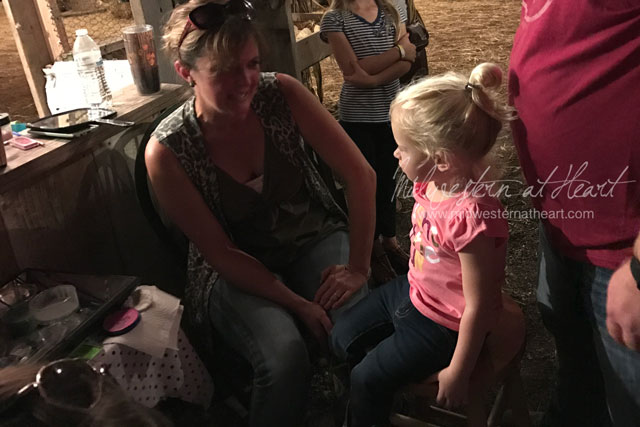 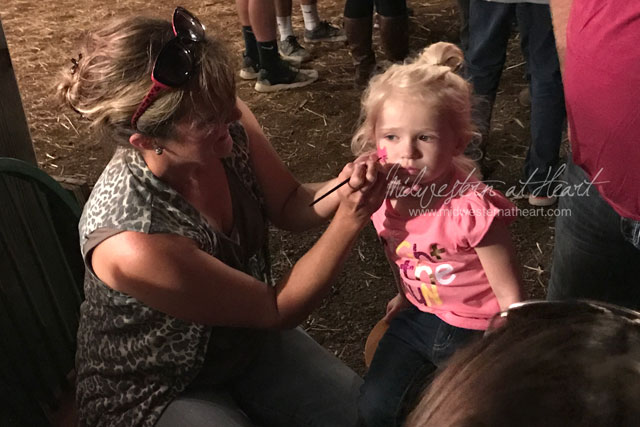 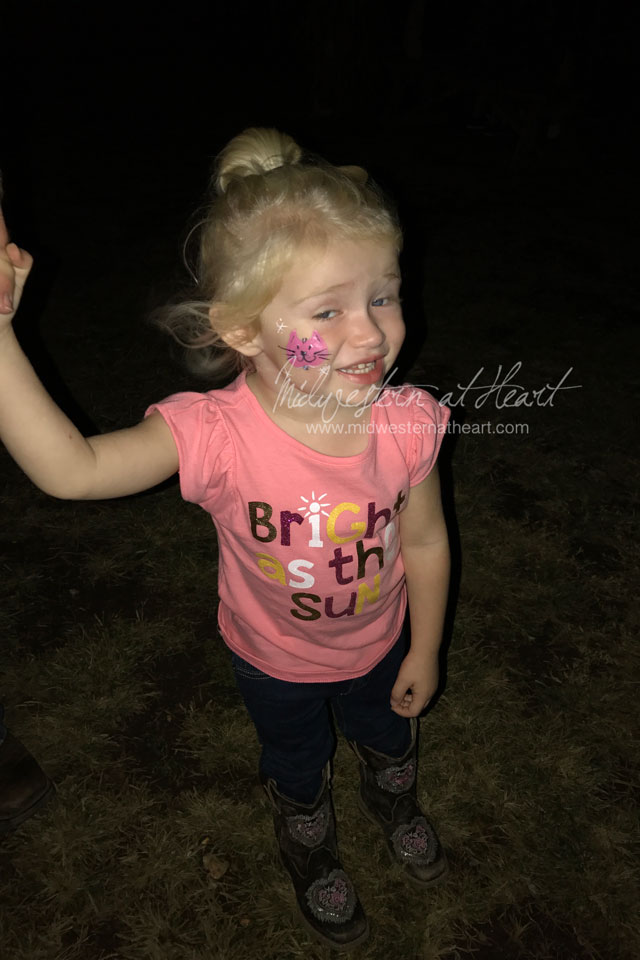 They also had a cotton pit and a corn pit. She loved both of those although she preferred the corn pit over the cotton pit. 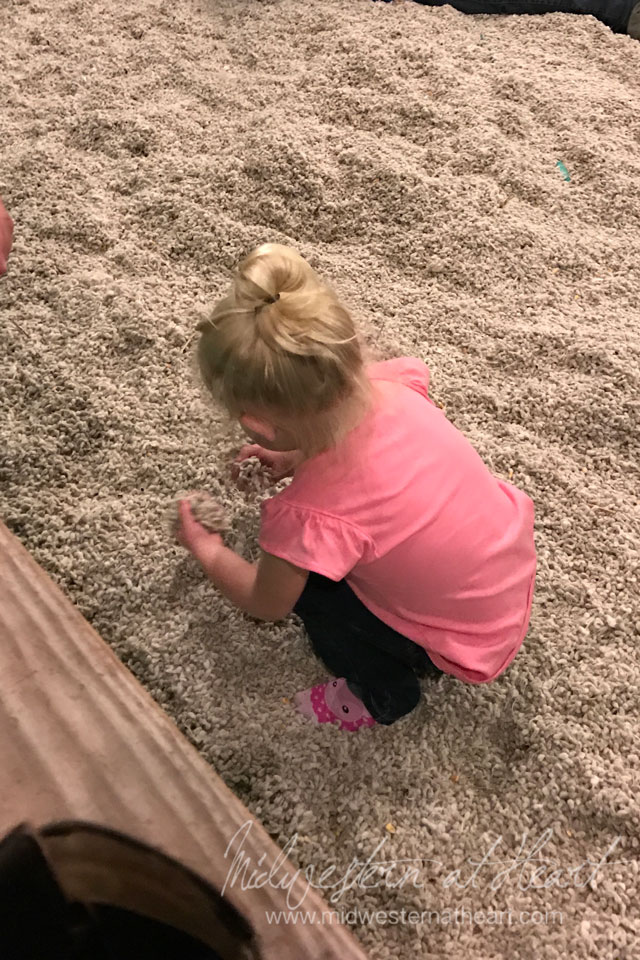 They also had those big jumping things… I can’t explain… big like air mattresses, but there were so many kids, especially big kids on them we wouldn’t let her on because I didn’t see that ending well for her.

Inside one of the barns, they had a little kids zip line and she LOVED it. Then there were spiny type swing things where you sit on a circle. She wasn’t so crazy about that…. but loved the zipline. Go figure.

Finally, there was a petting zoo. Her favorite happened to be the bunnies.