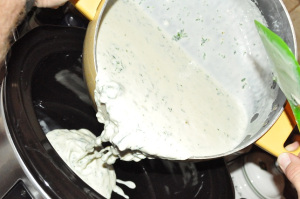 I told you yesterday I couldn’t guarantee you wouldn’t get a recipe today ;).

Hahaha I warned you 🙂

So the last couple weeks I’ve been working on my husbands 1 year anniversary present.  I know that it is still just over a month off, but it’s just over a month off.  It has taken a lot of thought to come up with something for him, that he’ll love, that he doesn’t know about (got his Father’s Day present in April, his birthday present on Father’s Day and his Christmas present in July, what can I say I’m working ahead of the game, but that’s just how it works sometimes) and keeping that a secret from him.  I’m kind of on the almost last step of it!  Just a little more to go.  I see the end in site!  Then I have to figure out where to put it so he doesn’t find it!!

Anyway…. I got carried away there I think…

So if you aren’t from the 4-State area (aka SE KS, SW MO, NE OK, NW AR) maybe you’ve never heard of Cafe Del Rio.   They serve Tex-Mex and all I can say is they have some amazing cheese dip.  A few years back I ran across a recipe that claims to be Del Rio cheese dip.  If it isn’t… it is so dadgum close that it has me fooled!

Add the half & half to a pot over medium to medium high heat.

Add your Monterrey Jack (if you choose to use it like I did.)

And American cheeses so they’ll melt into the half & half/cream mixture.  (I actually used singles and unwrapped them all, it was cheaper that way… but you can buy the block and cut it up, that’s always faster.)

Dice the jalapeno’s.  I only used a handful (not the full jar like the recipe said) and it added a bunch of heat!

Drain your thawed Spinach in a clean kitchen towel.

And then use the chopper, chop the spinach and add to the cheese/cream/h&h mixture.

Stir together and you are ready to rock ‘n roll.  I put mine in a crock pot and took to a friends house.

I took it to a friends house over the weekend where we got to do more of this!

And watch more of these!!

Ingredients
Instructions
Add the half & half to a pot over medium to medium high heat.
Add the cream.
Add your Monterrey Jack and American cheeses so they’ll melt into the half & half/cream mixture.
Dice the jalapeno’s. (use desired amount for your tastes)
Drain your thawed Spinach in a clean kitchen towel. Chop the spinach and add to the cheese/cream/h&h mixture.
Serve with Tortilla chips 🙂
Powered by Recipage

12 thoughts on “I Like To Dip {No double dipping allowed}”