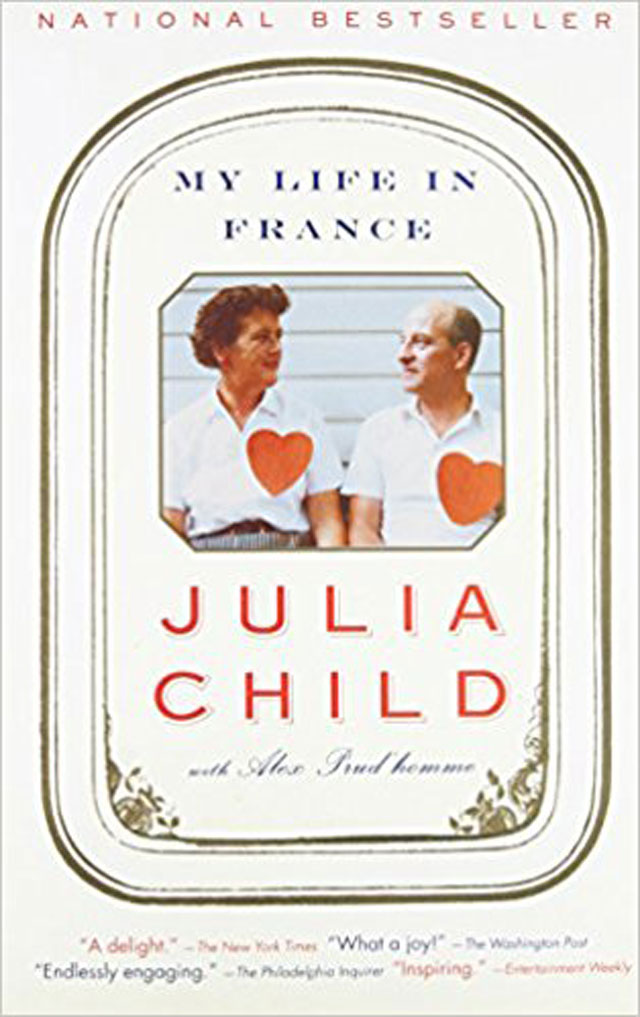 Oh, Julia Child. I sooooo would have loved to have been your friend in real life! Dang.

So, prior to reading/watching Julie and Julia I knew the name Julia Child, but truthfully I didn’t really know who she was other than a chef. I knew nothing about her. Then I read the book and watched the movie and kind of became intrigued in learning more about her. In fact, here recently I rattled on about the Nicole/Julia project. haha. Truthfully though, after reading this book, I’m even more intrigued in cooking my way through her book. My question is… what will I ever do on the foods I don’t like. Maybe I don’t like them because I haven’t eaten them properly… one may never know…

My Life in France

The bestselling story of Julia’s years in France–and the basis for Julie & Julia, starring Meryl Streep and Amy Adams–in her own words.

Although she would later singlehandedly create a new approach to American cuisine with her cookbook Mastering the Art of French Cooking and her television show The French Chef, Julia Child was not always a master chef. Indeed, when she first arrived in France in 1948 with her husband, Paul, who was to work for the USIS, she spoke no French and knew nothing about the country itself. But as she dove into French culture, buying food at local markets and taking classes at the Cordon Bleu, her life changed forever with her newfound passion for cooking and teaching. Julia’s unforgettable story–struggles with the head of the Cordon Bleu, rejections from publishers to whom she sent her now-famous cookbook, a wonderful, nearly fifty-year-long marriage that took the Childs across the globe–unfolds with the spirit so key to Julia’s success as a chef and a writer, brilliantly capturing one of America’s most endearing personalities.

This book made me want to eat what she was describing. Obviously, she was a chef. A very well known chef in fact and I so wanted to eat the food. Even the stuff I don’t care for, like fish. I want to go back in time (although this is nothing new really) to the 1950’s and experience Julia’s France. In fact, I want to experience Julia’s USA, if we’re being serious.

She and Paul had a house in France later in life for a long time. She described how she finally relinquished this house back to the property owner (it was all a verbal agreement, I wish people could still do those and hold true to their words!) and how the landscape had changed in 20 some years of visiting there. I would have loved to have seen them filming. Heck, I want to be on that film crew.

Guys, I’ve gone on YouTube and watched old shows (because well she passed away in 2004 a couple days before her 92nd birthday). The love she described of her and Paul is that of a fairytale. Now truth be told, I like to think my own love story is somewhat of one, but that’s a totally biased opinion most days! And maybe she didn’t believe hers was that I don’t know. I never got to meet the lady.

One thing… this book wasn’t just a fly through read. Some of that was because she wrote phrases in French and I don’t know French. Some she explained in English and some you could decipher, but every once in a while I got caught up in those.

I’m glad I read this too after watching the movie. There are a few things that obviously the movie has to rearrange or brush over, etc to make it fit in the movie time allotment. There were some questions that I had that got answered which was also great. And guys, I still want to cook my way through her book. She said she and Simca wrote the book so you felt like you were in their classroom. Heck, they both taught a class to Americans in Simca’s kitchen… can I just be a student in their class, please?

So, who is ready to time hop with me? I’ve always wanted to. I know I couldn’t make it in the 1800’s because I like my indoor plumbing, but can I please time hop to see how it was during her time anyway, please? Who wants to cook through her book with me? Any takers? Sigh…

10 Things (plus 1) to smile about May
Sometimes & Always
Finally Friday!
The Day I Got Chased by a Turkey

One thought on “My Life in France {Book Review}”