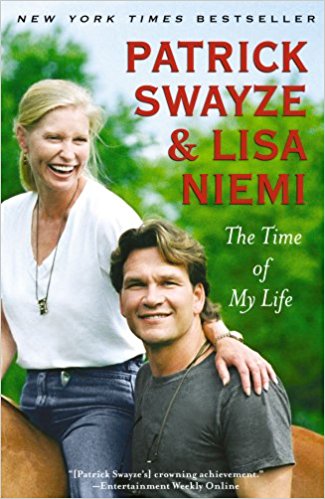 Over Easter weekend I was able to listen to The Time of My Life by Patrick Swayze and his wife Lisa Niemi. When this book came out in 2009, I remember I just had to have it and wanted to read it. I started reading the intro pages and immediately I put it down because I was in tears. I had a feeling this book was going to be so sad that I guess I never picked it back up. In fact, I gave it to my mom to read, she had the same reaction and neither of us read it.

Jump forward 9 years to the year 2018. Hubby drives a lot for work so he gets books on audio so he can “read” while he’s driving. Me, I’d be jamming to music, but he’s listening to audio books. Smart guy he is! Anyway, he decided he was going to get The Time of My Life. Bingo, that means I can listen to it too! I can’t read in a car. I can barely sit in a car for long drives. So I listened to this book.

Now here’s the thing… if you listen to this book, Patrick Swayze and his wife Lisa are actually the narrators. How cool is that?

The thing I’ve been trying to figure out is… I remember when they did the interview with him as this book was released. I also remember he said he was going to be the narrator. But what I can’t remember is how long it was between the time this book was released and when he passed away. I really want to say just a couple months.

The Time of My Life

In a career spanning more than thirty years, Patrick Swayze has made a name for himself on the stage, the screen, and television. Known for his versatility, passion, and fearlessness, he’s become one of our most beloved actors.

But in February 2008, Patrick announced he had been diagnosed with stage IV pancreatic cancer. Always a fighter, he refused to let the disease bring him to his knees, and his bravery has inspired both his legion of fans and cancer patients everywhere. Yet this memoir, written with wisdom and heart, recounts much more than his bout with cancer. In vivid detail, Patrick describes his Texas upbringing, his personal struggles, his rise to fame with North and South, his commercial breakthroughs in Dirty Dancing and Ghost, and the soul mate who’s stood by his side through it all: his wife, writer and director Lisa Niemi.

A behind-the-scenes look at a Hollywood life and a remarkable love, this memoir is both entertainment and inspiration. Patrick and Lisa’s marriage is a journey of two lives intertwined and lived as one–throughout their years in Hollywood and at home on their working ranch outside Los Angeles, and culminating in the hope and wisdom they’ve imparted to all who know them. This book will open the door for families, individuals, and husbands and wives to grow, bond and discover entirely new levels of love and sharing, proving that life shouldn’t be lived as a series of endings, but rather as the beginning of greater strength and love.

Guys, this book is a must-read. Or truthfully a must listen to because hello, it’s Patrick’s voice reading it to you! I laughed in a lot of places. In the beginning, it might have drawn a few tears, but truthfully, it wasn’t a sad book. After I said that, my mom has been trying to find our hardback edition so she can read it. I was like, oh just listen to this one, much better. Haha.

I am currently reading 2 books… After I finish those, what do I need to read next? P.S. nothing scary. I don’t do Stephen King type stuff.

2 thoughts on “The Time of My Life”