Hubby and I made plans to go out to dinner Saturday night after I got done with the girls and he was done chopping wood for the house.  I was being pretty wishy washy about even going and didn’t know where I wanted to go or what even sounded good when I just smarted off, Red Onion.  Hubby was like, you know, that sounds good.  I probably haven’t eaten there in 15 years or something.  Yup, he just dated himself. lol. 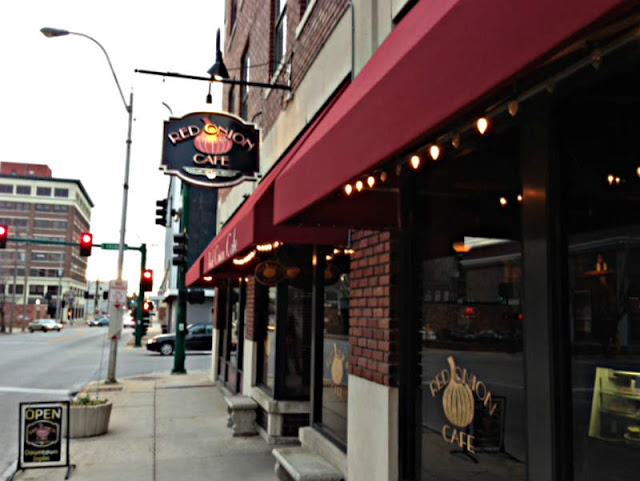 Red Onion is kind of off the beaten path that we generally run so I never really think of it, but  you want to talk about GOOD food… this is the place! 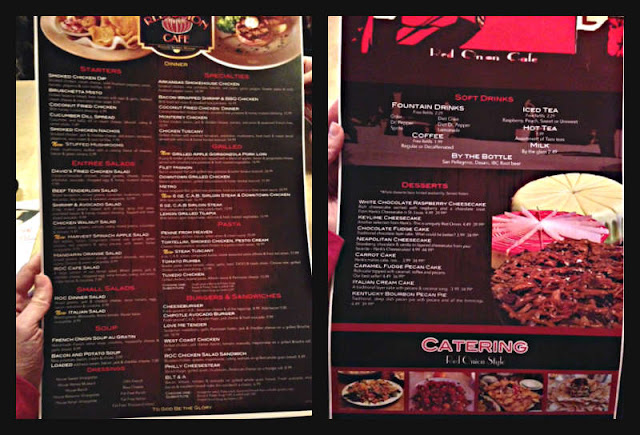 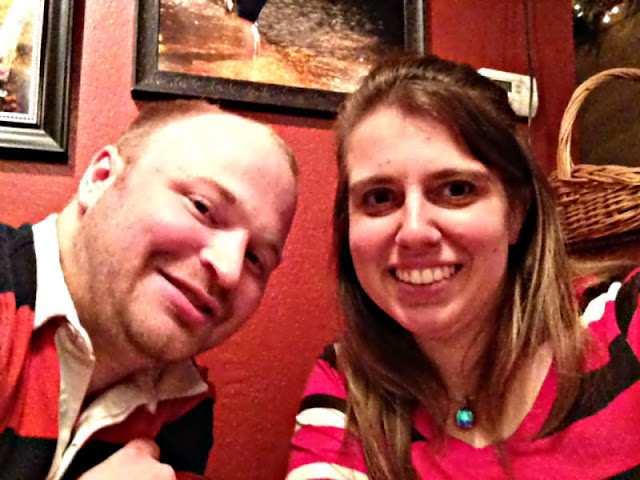 Back in the day at work, I worked in a department that the gal’s husband had something to do with Red Onion.  Anytime we had a goody day, she’d ask him to bring some of this Smoked Chicken Dip home so she’d have something to take to work and OMG, it was finger lickin’ good and bowl lickin too! lol

I immediately jumped in with can we get this.  Of course hubby obliged.  And yes, we ate every last bit of it too.  The chips were good too :). 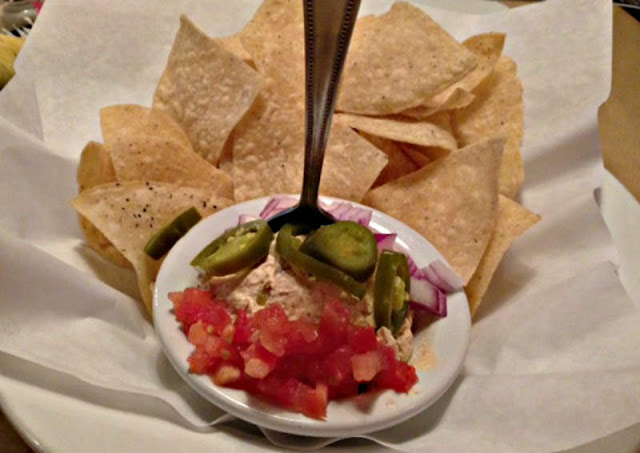 Our entree’s came with salad or soup.  I got the salad with Ranch and hubby got the French Onion soup.

Hubby was glad that I got the Dinner Salad as he wanted both soup and salad and I wanted to try the soup.  Ok so the salad was good.  The dressing was really good!  I wanted to lick the cup, but I refrained :).  But the soup.  OMG the soup.  I screwed up and got the salad and not the French Onion Soup.  You could make an entire meal on the soup alone and go home happy.  Some places put huge lumps of bread in the soup which makes it difficult to eat, but there were 2 smaller pieces and just dipping the garlic bread alone and letting it absorb the broth… oh, sitting here thinking about that, I want it all over again.  Yes, it was that good! 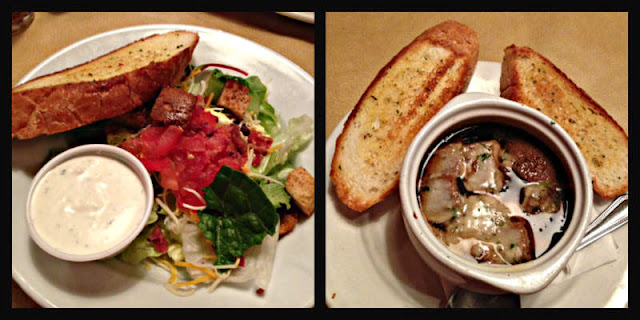 For my entree I got the Tortellini with smoked chicken in a pesto cream sauce.

Best decision ever, well maybe not best, I could have gone for more of that French Onion soup but moving on, moving on.  The smoked chicken made the dish delectable!  The pesto cream sauce was light but enough there you weren’t eating dry pasta.  The garlic toast had a yummy, garlic taste but not over bearing.  The cheese tortellini were yummy and cheesy.  Ah, let’s just say I left satisfied and stuffed! 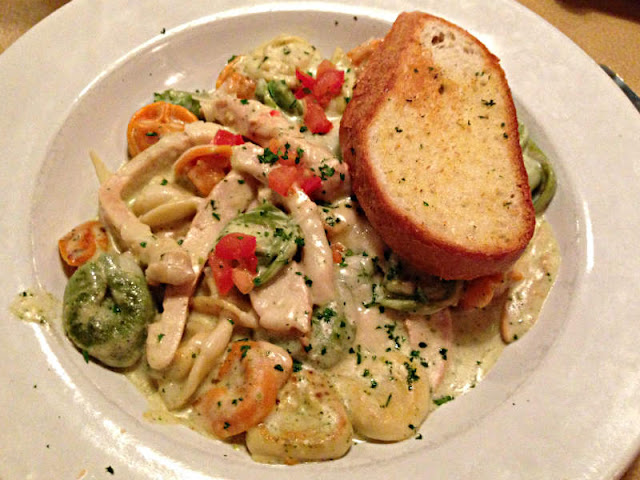 Hubby went for the BBQ chicken with Bacon wrapped shrimp.  Kind of my suggestion but only because that’s what I read through the menu and thought he’d choose.  He had originally thought about getting a steak of some sorts.

The potatoes were good and I love when they add some of the peels to the potatoes.  The chicken had great flavor and the bbq sauce added to it.  The shrimp in my opinion was too fishy tasting but hubby really enjoyed it.  And it even came with a side of little shoestring onion rings that he said were really good.  I didn’t try them. 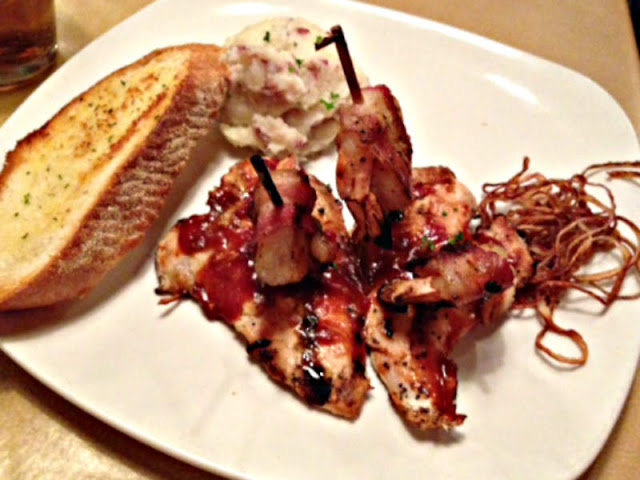 We just so happen to glance through the dessert menu and saw Kentucky Bourbon Pecan Pie.

Now if you know my husband, he doesn’t generally eat nuts although he’s coming around to different types so when he picked out the pecan pie I was kind of in shock.  We were both sooooo stuffed though but wanted to try pie.  So we got a piece to take home.  We had to go to the store afterwards so we figured we’d walk off some of dinner and then go home and enjoy our dessert.  And enjoy our dessert, did we!?!?  The pecan pie was fabulous and a dollop of yummy whipped cream to top it off was the perfect end to a perfect meal and date! 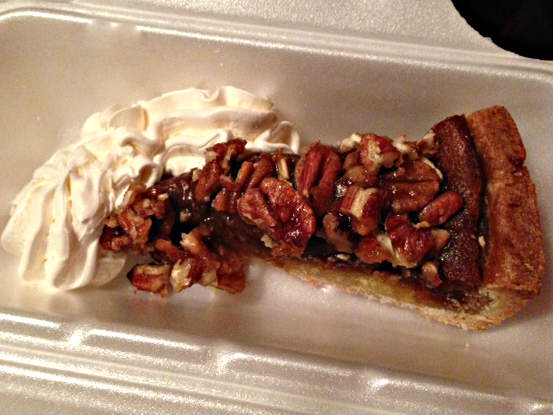