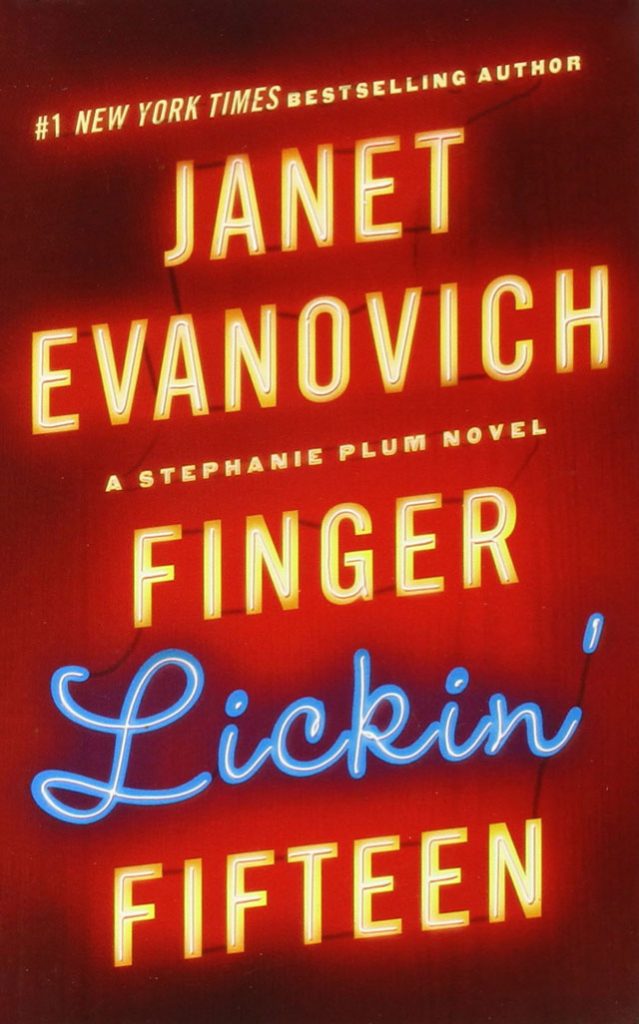 So truth… I like real books. Point blank. I like the feel of the pages and the smell and the weight and the ability to turn pages. But… I also like my Kindle. Mainly at night when everyone else goes to sleep, but I’m wide awake, I can read in the dark. So I’m torn on which I prefer. Currently, I’m reading a book book and a book on my Kindle. I just started the one on my Kindle last night. And boy was that a shocker. I was updating my Good Reads App and realized I read one more book than I thought. I started to read Finger LIckin’ Fifteen last night and what do you know, I read it last month. Apparently, I just forgot.

I mentioned before that these books are all kind of the same but different. You just have to remember if Stephanie and Joe Morelli are on or off in that particular book. The rest is similar but different. LOL. But I like them because they are quick reads. And after I realized I had already read this book, which by the way I thought was fourteen… I remembered how much I laughed because of Lula farting. Read it. That part will make sense.

Unbuckle your belt and pull up a chair. It’s the spiciest, sauciest, most rib-sticking Plum yet.

Recipe for disaster: Celebrity chef Stanley Chipotle comes to Trenton in a barbecue cook-off and loses his head – literally.

Throw in some spice: Bail bonds office worker Lula is witness to the crime, and the only one she’ll talk to is Trenton cop, Joe Morelli.

Pump up the heat: Chipotle’s sponsor is offering a million-dollar reward to anyone who can provide information leading to the capture of the killers.

Bring to a boil: Stephanie Plum is working overtime tracking felons for the bonds office at night and snooping for security expert Carlos Manoso, aka Ranger, during the day. Can Stephanie hunt down two killers, a traitor, and five skips, keep her grandmother out of the sauce, and solve Ranger’s problems and not jump his bones?

So… by reading through some of that, you can see that there is a BBQ contest involved. Lula doesn’t know how to cook but has entered it anyway. And she causes a lot of farting. Let’s just say that there is a huge fart at the end of the book that wins the case. Oh gosh, the 12-year-old side of me that giggles at farts I guess comes out in this book. What can I say?

The 12-year-old in me comes out sometimes, I just can’t help it. I blame her anyway.

Reading book fourteen, I kind of got bored. I’m actually surprised I went ahead with fifteen, yup, I was kind of bored. But fifteen brought back my love of the Stephanie Plum series, even though I forgot I read fifteen because I thought 15 was 14. Did you follow all of that?

Last night I started 16. Please help keep me straight on which book I have and haven’t read. Thanks!

Yesterday I was working on a sugar cookie order. Just about the time I ran out of made icing, it was lunchtime so I went to making lunch and the power went out. It was out for a little over an hour. I couldn’t make lunch and I couldn’t make more icing. I’ve been reading Julia Child’s My Life in France (it’s slow going… but good) so I picked it up and decided to read while we waited for the electricity to come back on. I guess I was so engrossed in the book that when the electricity came back, I nearly jumped off the couch and out of my skin. I’m sure it was a funny sight to see.

So one last thought about the Stephanie Plum series. There are people out there who claim they hate to read. Sadly, I used to be one of them. But, this series brought about my love of reading back in the early 2000’s. I was a substitute teacher in 2005/2006 and had a lot of free time on my hands. To fill that we didn’t have smartphones, we had books. I’m not even sure there were Kindles yet. Either that or I was too cheap to own one, so I had books. But I gained an appreciation for reading and a love for it too!

So I guess if you are one of those people who, “Hates to read,” try this series. But take my word for it, don’t start with book 11 (like I did). Stephanie goes through a “midlife” crisis in that book and it’s a little helter skelter. Start with 1 or 12 or 22, I don’t care. Janet Evanovich writes these so you can jump in anywhere and not be lost. Or better yet, if you think you’re a Ranger fan, start with book 8. Just saying… your welcome.

It's Not Officially Summer
Costa Rica Baby!
The Pineville Grill {Pineville, MO}
2012 is a Clean Slate