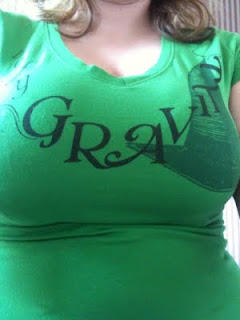 So yesterday was a fun day! Prince Charming and I went to Tulsa to see Tbug in her Cheerleading competition. They were third! Yey! While in Tulsa we went and did some Christmas shopping, which is pretty well done now, experienced our first IMAX movie, and of course ate dinner :). Prince Charming was bragging about How his Tom Tom which he calls Ditsy never gets him lost… yeah we were on 71st St and I was like why don’t we stay on this road. Prince Charming said that either it is programmed for the shortest route or the quickest route. Yey, we wound up getting dumped off in the middle of a subdivision. To make matters even better, all we’d have had to do was go under the bridge and we’d have been at the IMAX. We also saw a very funny sign while driving through the subdivision that Ditsy took us too.

Now I’m sure you are ready to see this weeks “Green” photos:

It is my Defy Gravity shirt from the musical “Wicked”.

Prince Charming actually had a different idea in mind but wasn’t able to get it done so he caught me in his army jacket this morning.

Next week’s word: Giving Thanks.