So funny story… after our nap on Friday while we were in St. Louis, we woke up around dinner time.  Somehow we decided upon this Kobe Japanese Grill, so I looked up the directions, we got in the car and we took off.  It said it was only 4 miles… yeah the 4 miles we went dropped us off in the middle of nowhere (not really… it was a neighborhood) on a street that didn’t exist.  Now what’s funny is as we got on the road from the hotel, I noticed the GPS showed a Kobe on the map.  I questioned hubby but we decided to follow directions.  Yeah, big mistake.

After we realized we were in a neighborhood, we turned around and went back to the hotel.  I knew there were other places there by the hotel if we couldn’t find the Japenese Grill.  So we wandered around this area which btw, we found LOTS of stuff we didn’t know was there.  Finally, we realized that it was on the 12th floor of one of the buildings so up the elevator we went.  Sure enough, there it was. 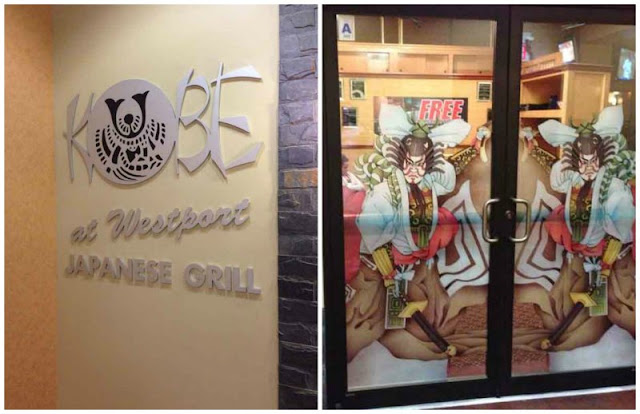 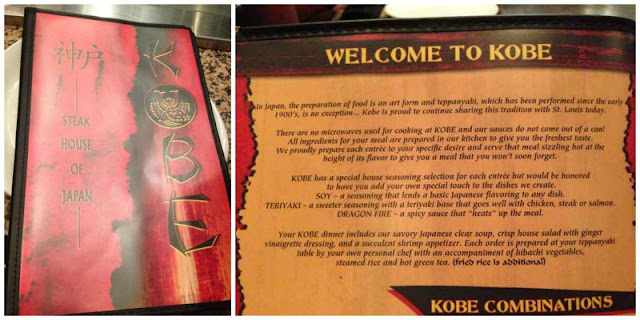 After we placed our order, hubby saw they had Mai Tai’s on the menu so we ordered one for each of us.  Since we walked there, no driving involved, it was A-ok. :).  They were okay but I preferred my coke.  Nothing beats the Mai Tai’s from Hawaii. 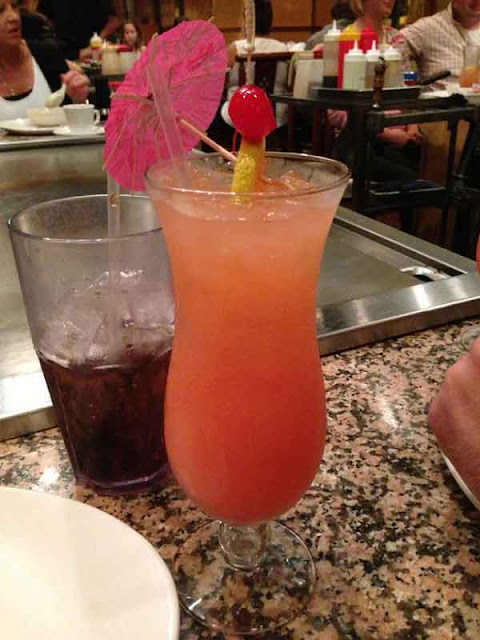 The waitress came around with chopsticks and hubby chose to take a set.  I didn’t.  I’m not so coordinated. 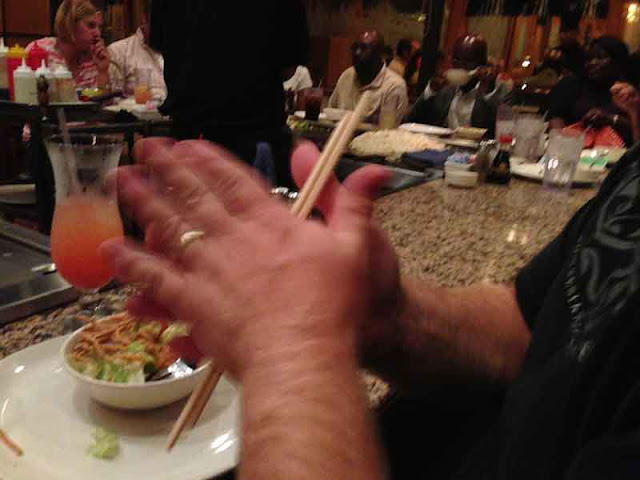 We started with a mushroom/onion broth soup and a ginger salad (although we had the option of Ranch dressing on our salads). 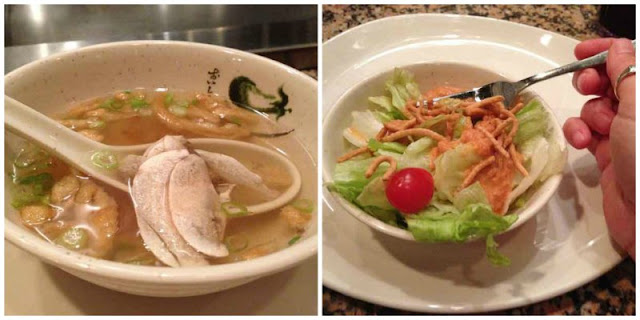 Then the chef came to start cooking our meal.  They always start by cleaning off the grill. 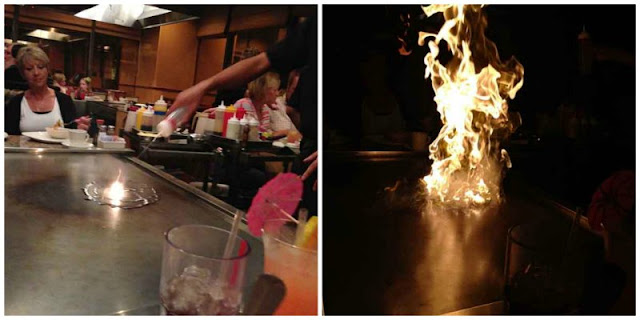 They also dish out the sauce.  Hubby and I usually go for double the shrimp sauce.  We’re not really the red sauce kind of people. 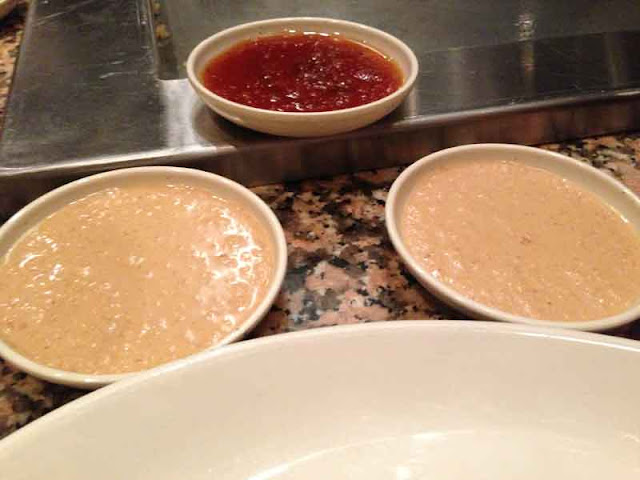 Um… notice the bowl in the Chef’s hat?  Yup, he threw it there.  Pretty cool huh? 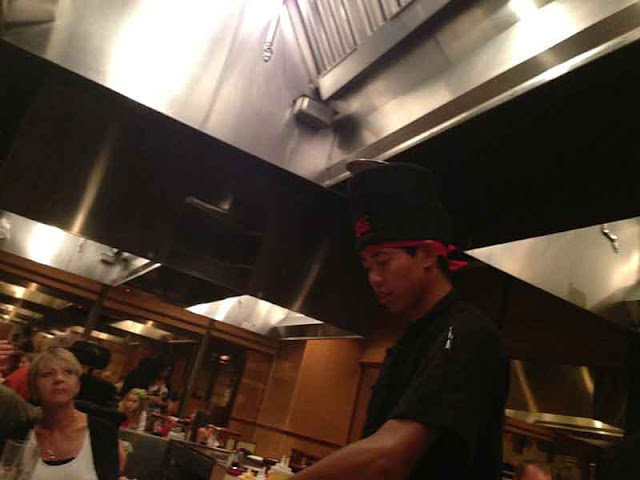 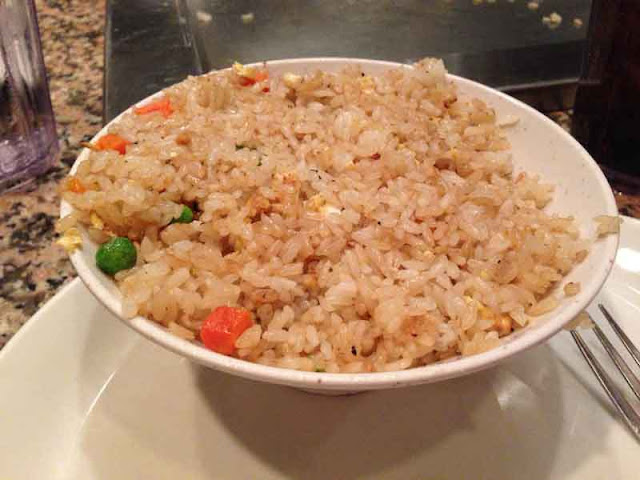 Then it was time to start working on our sides.  How about an onion?!?!

We got the noodles that came toward the end of the meal.  The vegetables (including the onions) and then the mushrooms were made separately. 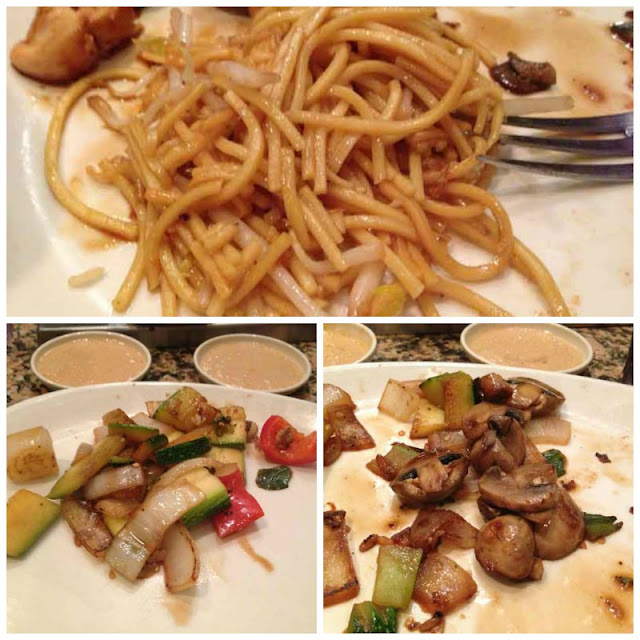 I think hubby’s winking at the camera. 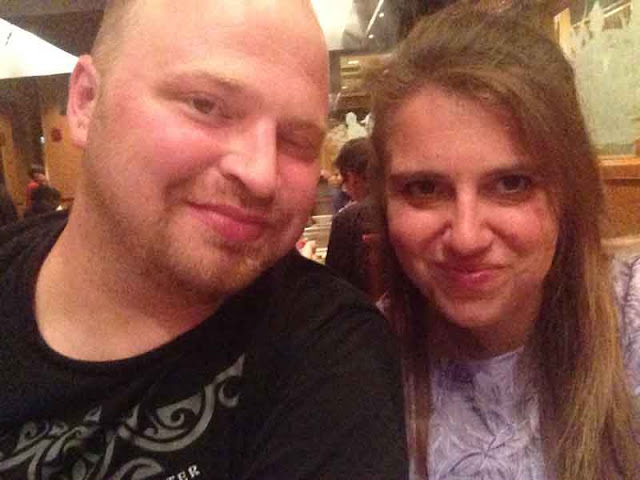 Hubby ordered Shrimp and Steak.  I ordered Shrimp and Chicken.  Wow, that steak was cooked to perfection.  Our experience, usually it’s overdone, we like Medium Rare, but this stuff was great.  Then the Chicken.  Oh, the chicken.  Nice, moist, juicy.  It was good.  We did it that route so we’d be able to try all 3 :). 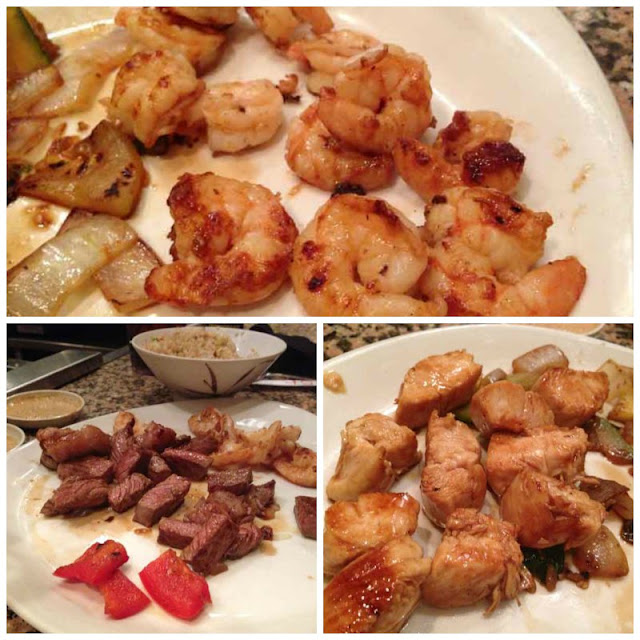 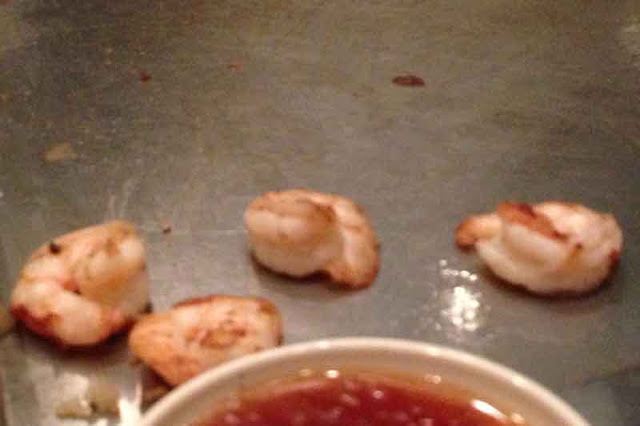 We all got our chance.  My first piece went flying to the floor… whoops and the second piece I caught with my hand, but that gal was great.  Her husband, he didn’t catch the first 2 pieces, she showed him up and then he caught one.  Hubby didn’t catch his either.