It’s so funny sometimes to watch what riles people up on facebook. Right now it’s the whole Thanksgiving comes before Christmas ordeal. Okay, here’s a surreal thought… there’s only 7 more Monday’s until Christmas. YIKES! I am a person who sings Christmas songs year round. In fact, last week I was listening to Christmas music before Halloween to keep myself calm the day of Comps. And one year we had our Christmas tree up 3 weeks before Thanksgiving. Why? Well… we try to decorate our Christmas tree with Tbug around. That year, that was the only weekend other than the weekend before Christmas that worked out. Who wants to put a tree up for just a week? It’s a lot of work, plus… all the Christmas decorations are awesome so… 3 weeks before Thanksgiving it was. My tree doesn’t come down until February most years anyway….

Anyway… that’s not the point of today’s post. Today’s post is talking about Halloween in November. ha! I may just have my days mixed up… or the fact that Halloween is the last day of October, hubby’s birthday is the 1st day of November, we had a weekend in there plus yada yada yada…. (=I wanted to participate in the 10 things to Smile about October) so here we are, the 4th day of November and finally talking Halloween.

Apparently I’m wordy today! I’m also picture happy. But what’s new there? Out of 85 pictures, I narrowed it down to 24. Who doesn’t like pictures. Don’t ask my mom… she doesn’t like to have her picture taken anyway.

Last year we weren’t able to carve pumpkins with Tbug. Don’t worry, we still carved pumpkins with her… what I mean is… we did her pumpkin one weekend and then hubby and I did our pumpkins a different weekend. When she’s there only so often, you work with what you can! She actually was working on carving on dry land so that the next day she could carve underwater. But that was last year… This year she was able to carve with us on the same day! We did wait until Halloween, but we all carved together. 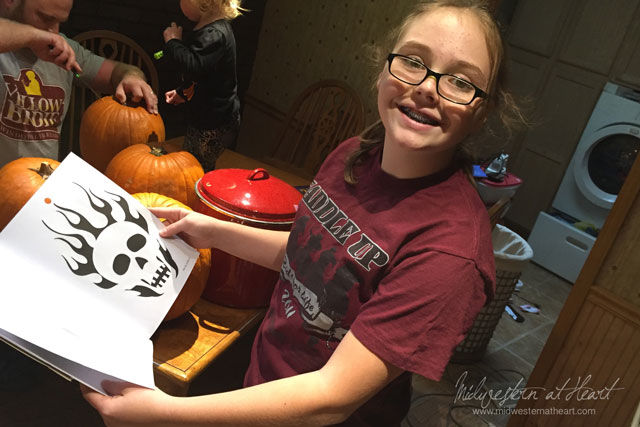 There are a couple pictures of Tbug and me and we’re in the same stance at the same time. It’s funny. 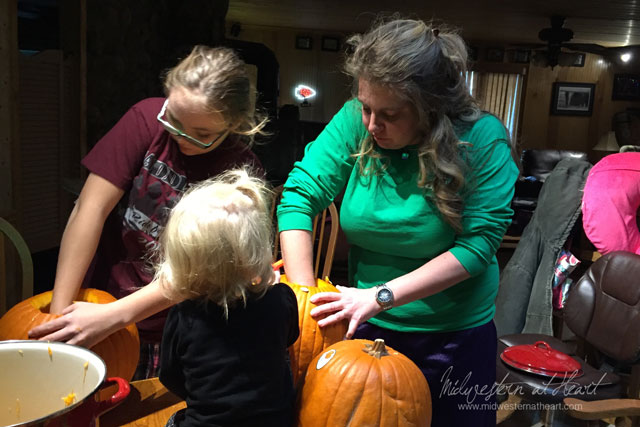 So I read a new way to carve this year and it worked fairly decent. So you get your paper/pattern wet. place it on the pumpkin as best you can. Then cover it in cling wrap. Now you cut on the lines. If your paper starts to tear, just grab more cling wrap, place it over where you’re cutting and you’re off again. Holy cow was that easy! 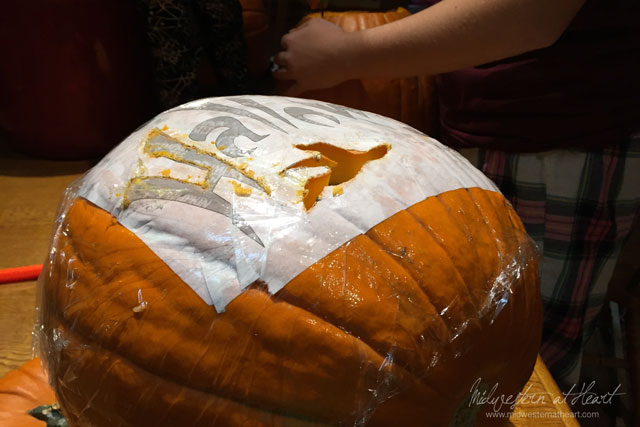 Hubby on the other hand used the poke tool thingy and traced his pattern that way. I much preferred mine. Tbug was to punch out parts of her pattern but then we had her try it my way. It had a bit of an issue for her… but she worked with it. It was a learning curve this new way I found. 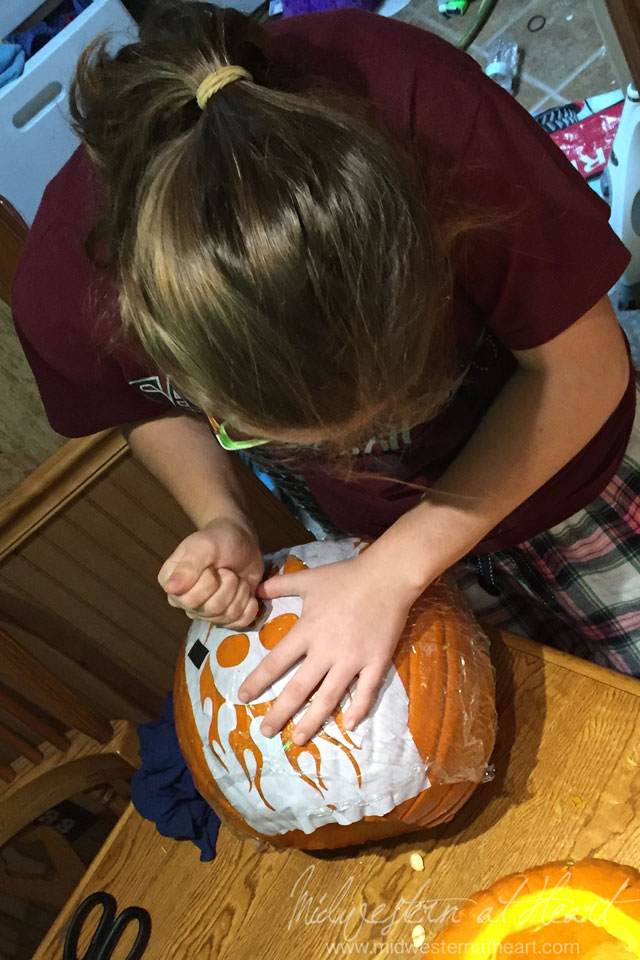 Abug was having so much fun bouncing around between us. She kept throwing tools in the pumpkins and in the “guts” bowl and putting the lid on the guts bowl and just whatever. 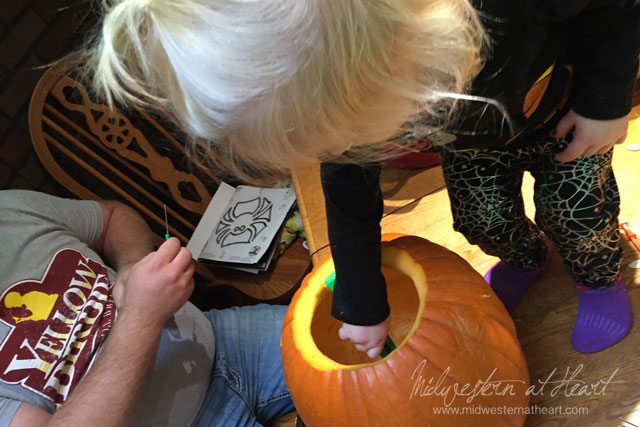 Then it was time to pick/carve her pumpkin. I was the first one done carving mine so I helped her carve hers. Tbug actually gutted it for her/us because she was waiting on hubby to help her with something on her pumpkin. 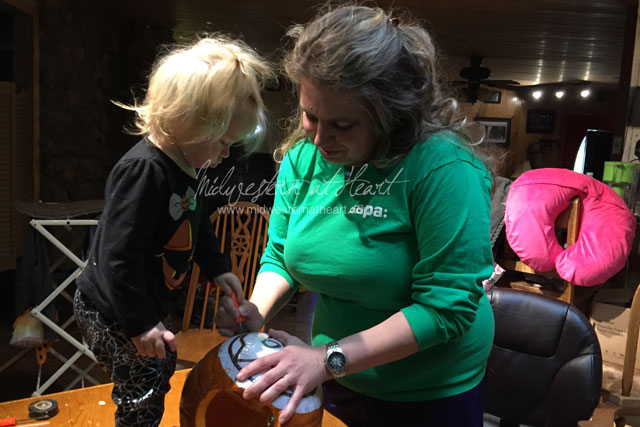 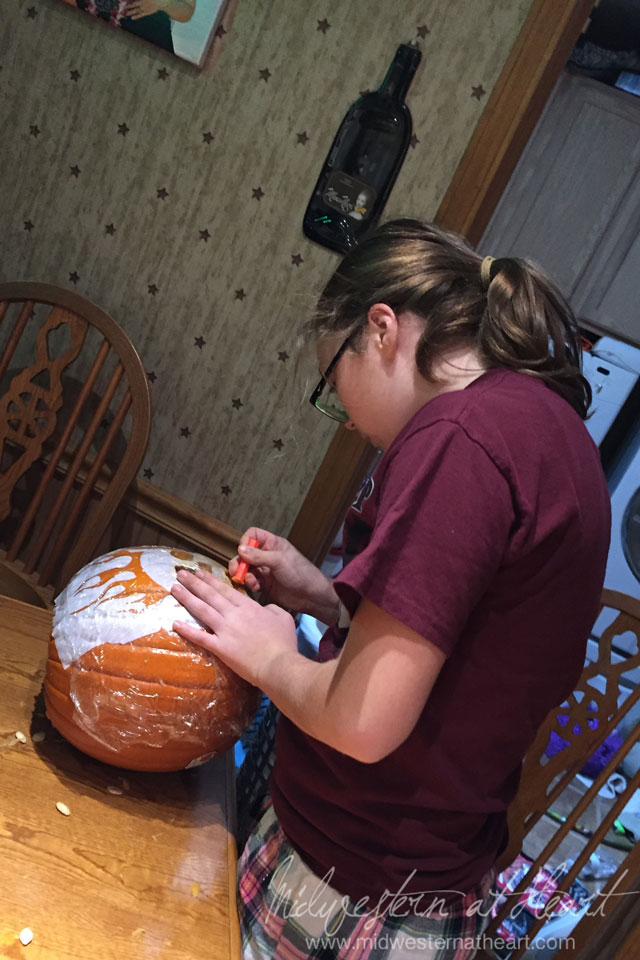 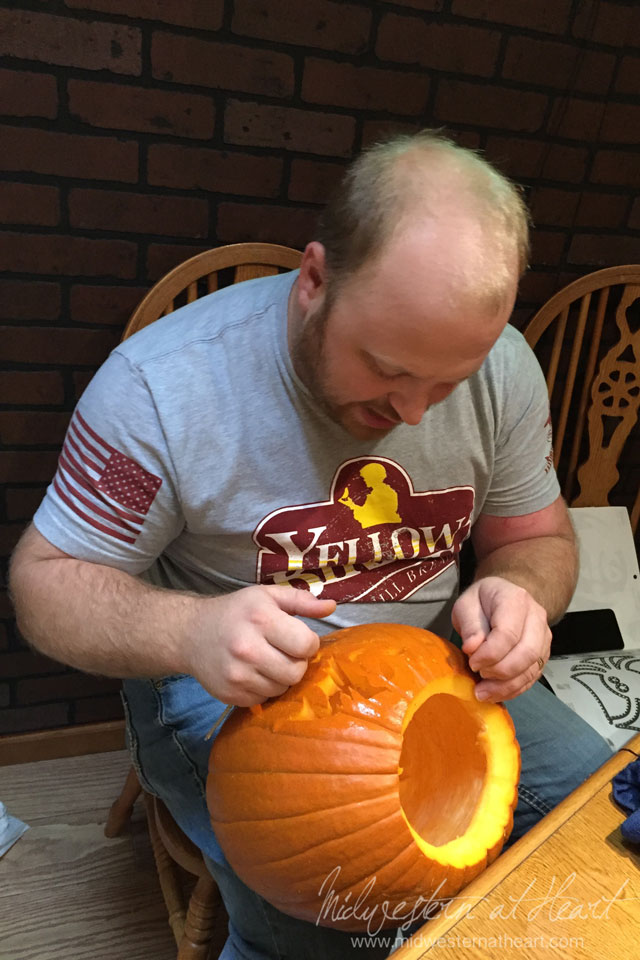 Abug picked the cat. I said it’s because she likes cats. The other option for her was a spider. We decided the cat was easier. She did help me too. 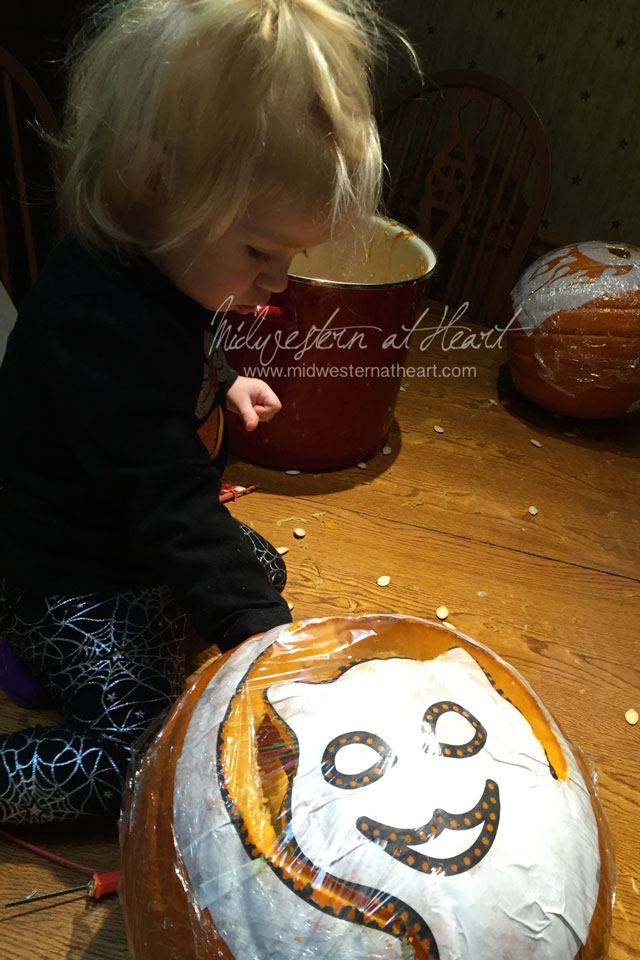 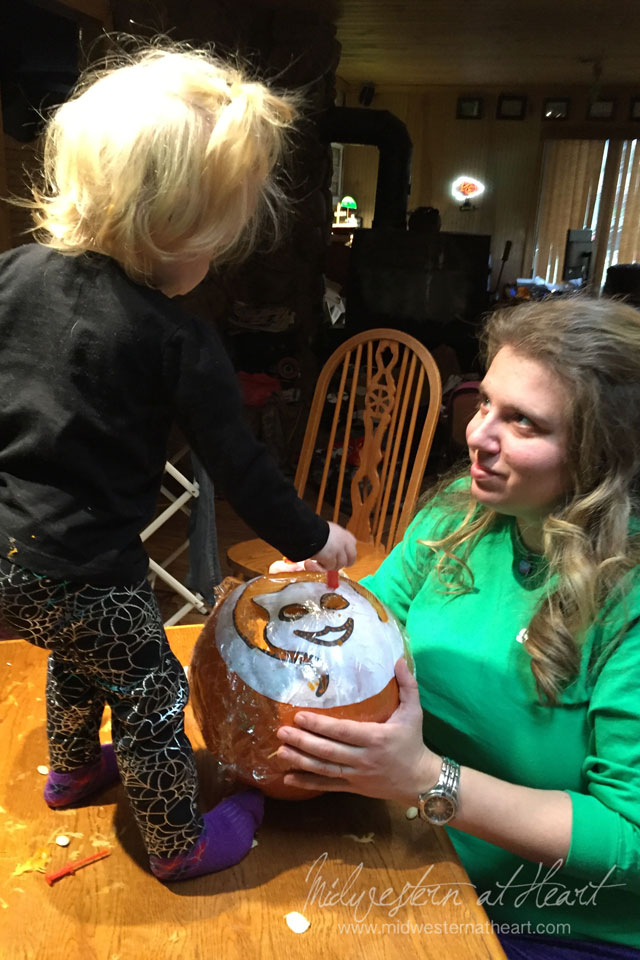 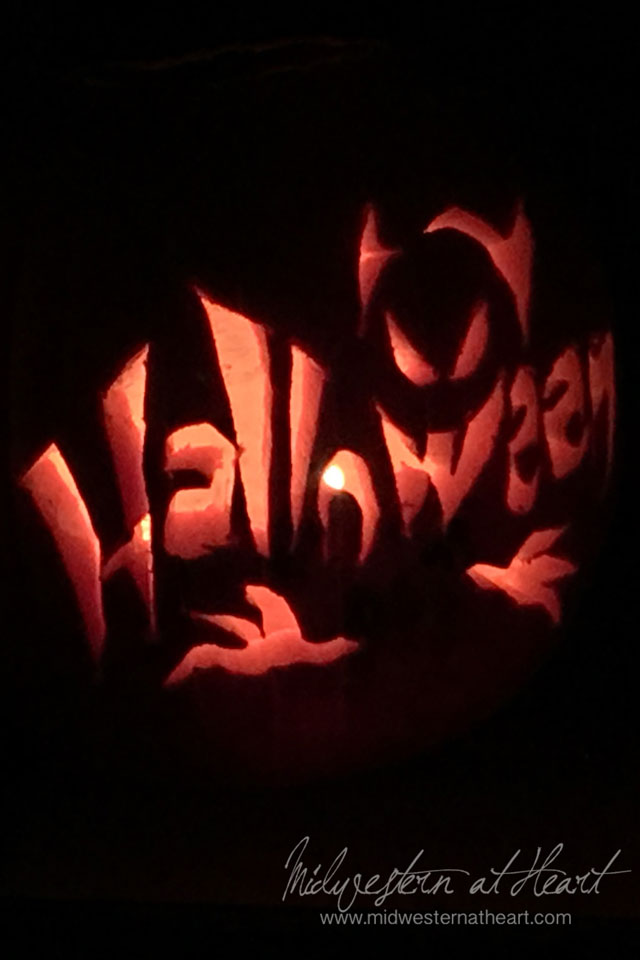 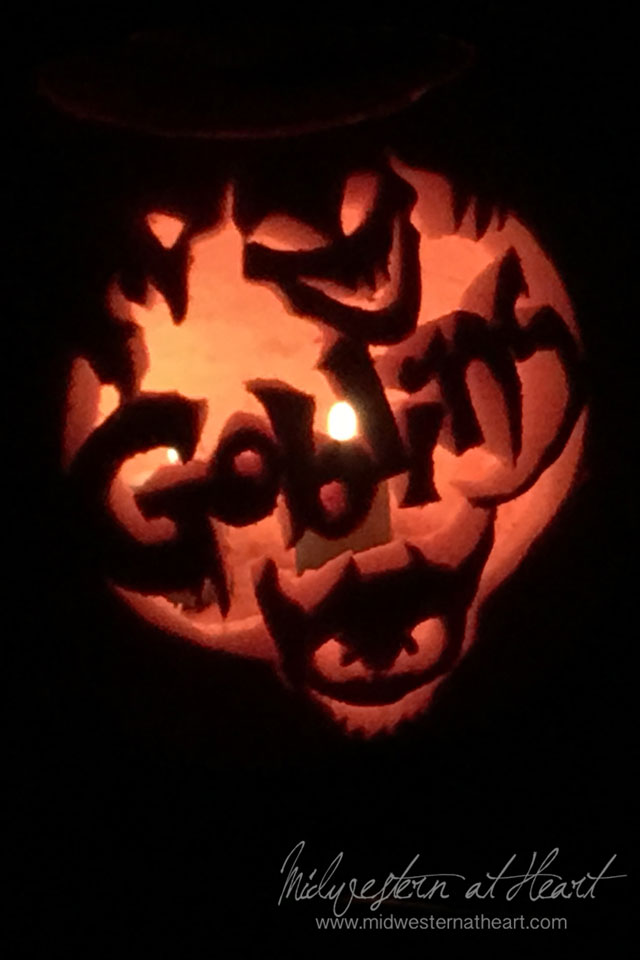 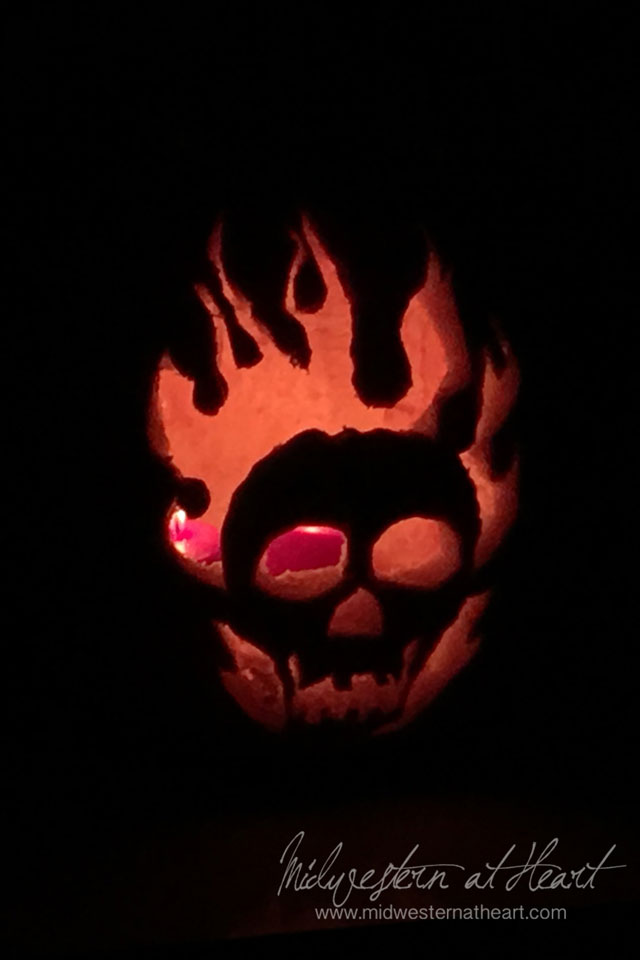 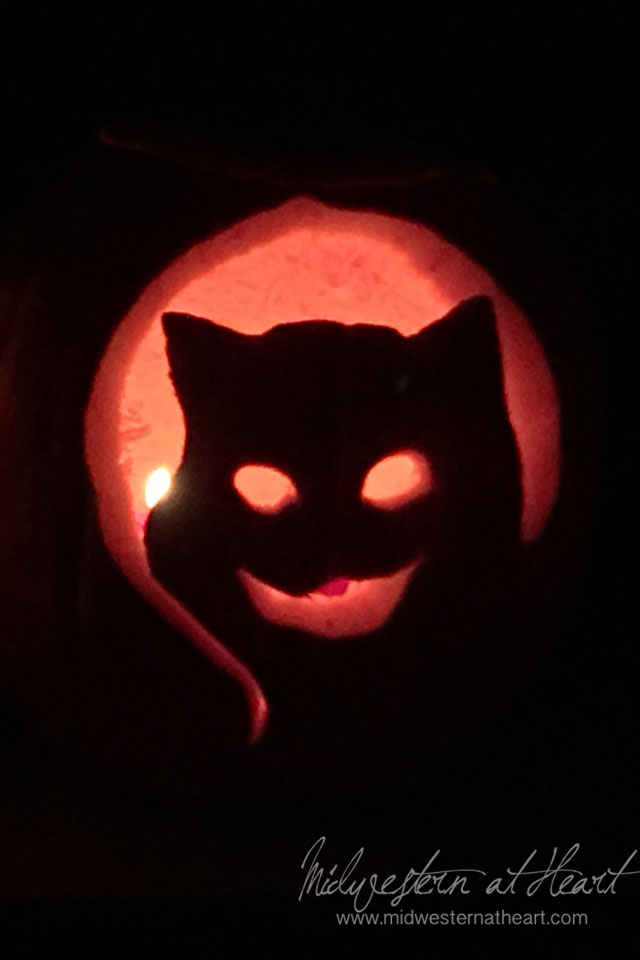 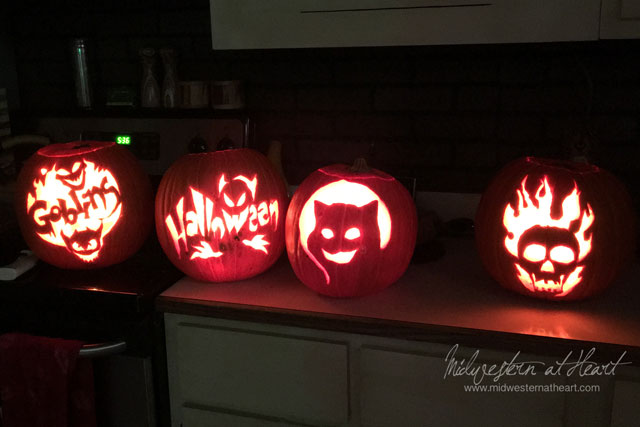 The whole family had laid down to take a nap around 1pm Saturday afternoon. Abug and I fell asleep and wound up sleeping almost 3 hours. Our plans were to carve pumpkins in the afternoon then head out trick-or-treating. Our sleeping kind of put a cramp on plans, but we got it all accomplished. Hubby woke us up at almost 4pm. We spent 2 hours carving and then took the girls out trick-or-treating.

We live in the country so our version of trick-or-treating is different than some… It’s the way I always did it as a kid. Go around to visit particular people and call it a night. Luckily Memaw came to our house to help us out some. She watched us finish up our pumpkins, then we quickly changed the girls into their costumes. 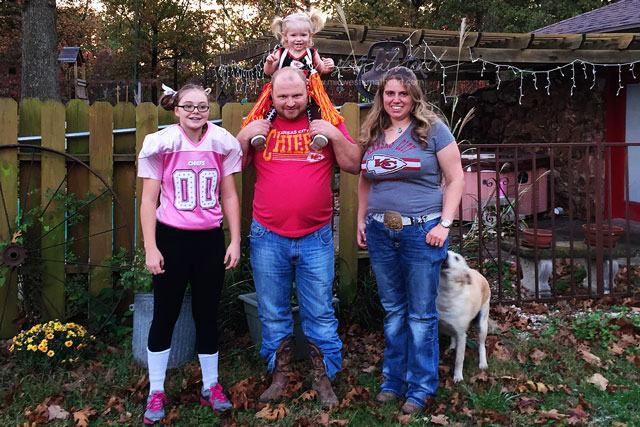 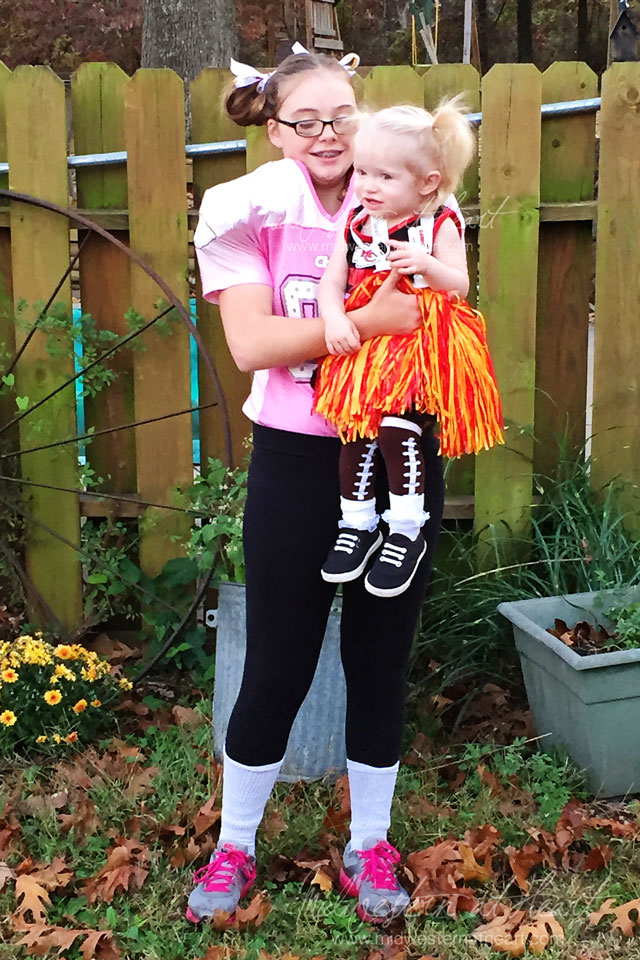 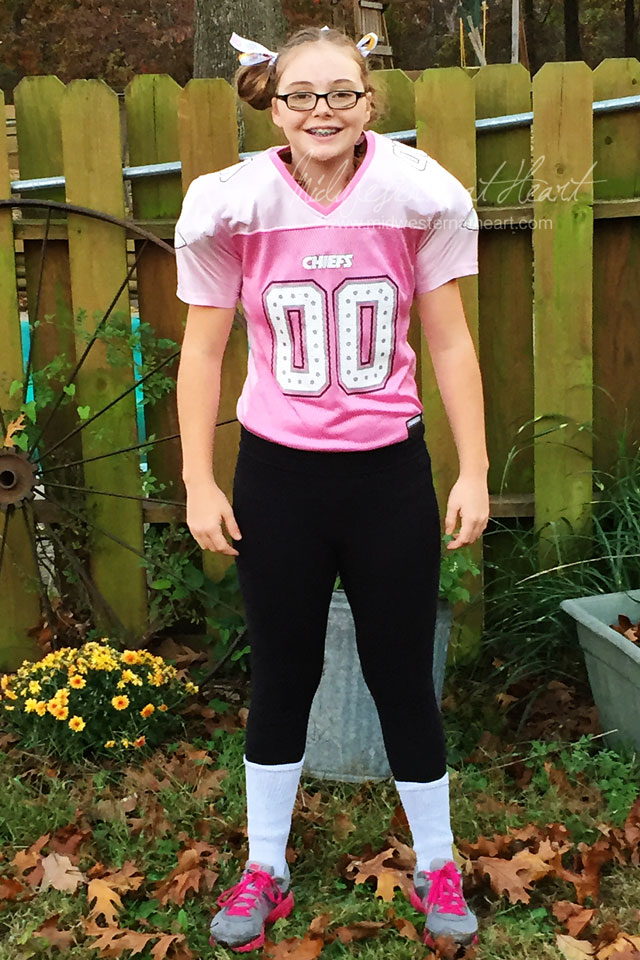 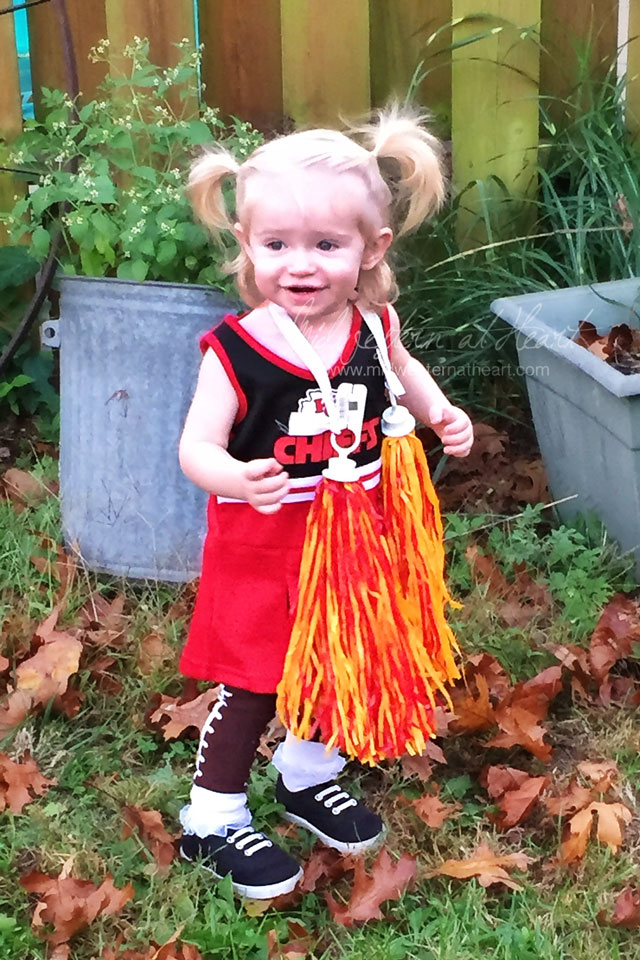 While we were out we decided it was time to grab a bite to eat. We ran by Fazoli’s. Tbug got her braces put on last week so we were trying to find something a little easier for her to eat. I’ve had braces, I know she’ll learn to eat anything, but it’s always a learning curve. Plus she has this spacer thing on the roof of her mouth right now which makes eating certain things a little more difficult. (only because food keeps getting trapped between it and the roof of her mouth).

I went with the Chicken Parmesan. Yum! 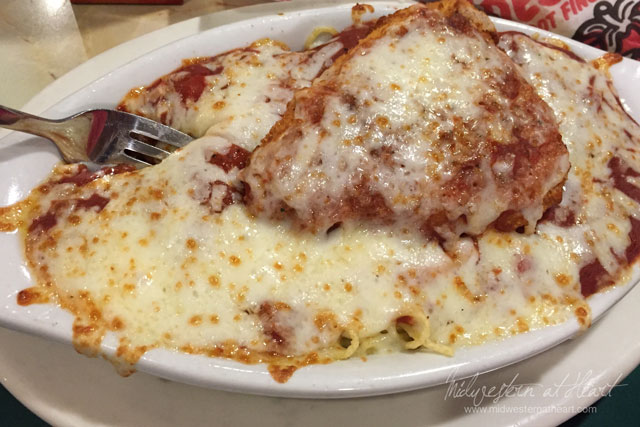 Tbug got Baked Ziti. Tbug liked it. I think I stole a bite, I can’t remember…. 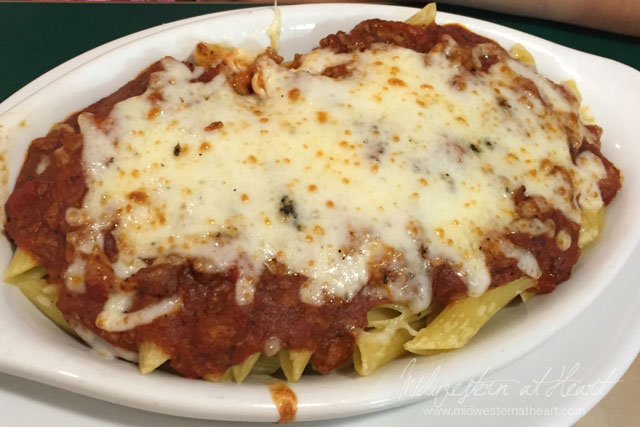 Hubby got Twice Baked Lasagna. Yum. I like lasagna though :). 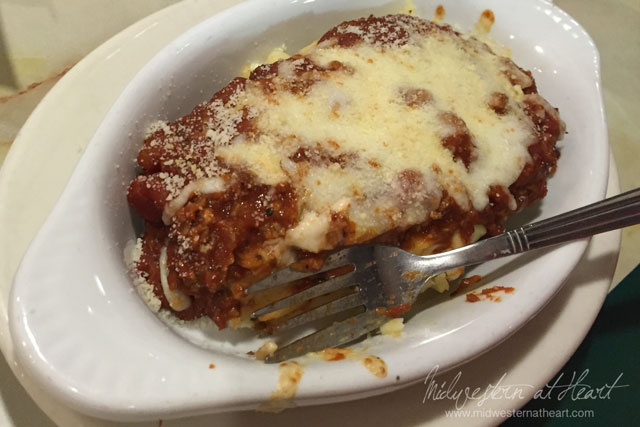 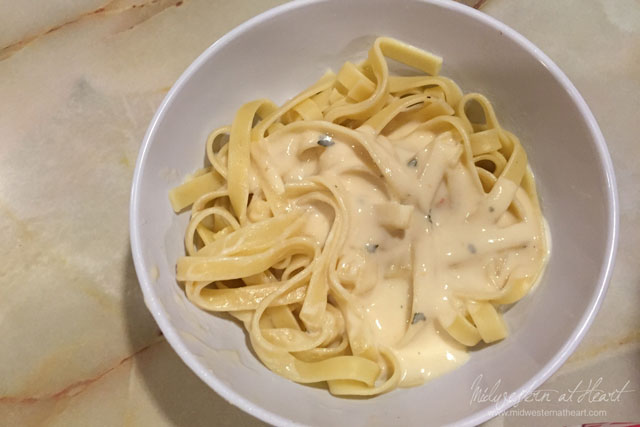 We finally got to call it a night a little after 10pm. And that was just we were done trick-or-treating. Then we had to drive home and take showers. All of us but Abug. She got her bath at grandma’s house before we left :). But she still slept in her Chief’s Onesie so she kept in the spirit :).

Hey, maybe that is what helped the Chiefs go on to win against the Lions on Sunday 45-10…. ya think?