This last weekend started off with celebrating my grandpa’s birthday Friday night. On our way down to pick my grandma up my dad got a phone call from a friend asking him to come over and ride horses Saturday morning.

I knew hubby had plans on cleaning up around the house… no specifics were know, just the knowledge of it. So when dad asked if we wanted to go ride with him, Tbug, Abug, and I jumped at the chance. Come on, ride horses or work… you decide. Hubby is a good sport and said, “well you girls have fun.”

We got up early enough Saturday morning that we could run through town and get breakfast, then we headed to my parents house. Dad decided we could eat breakfast before we unloaded horse/cow feed (don’t worry we got him some too) so I sat Abug down on the dog food for a place to eat her breakfast. If you want to know how to keep a toddler still for a photo, give her food! :). haha. 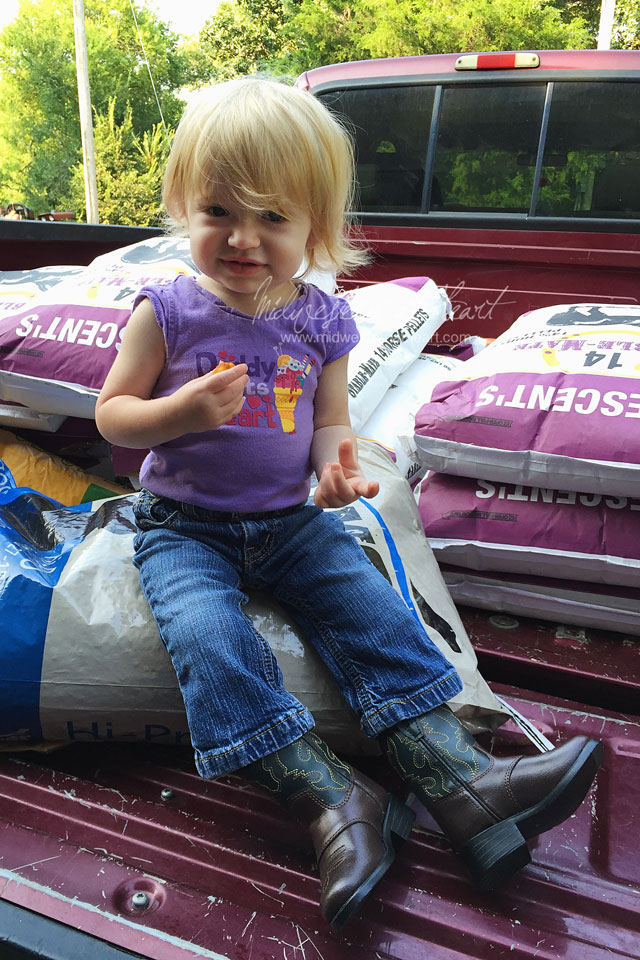 Then it was time to unload feed. Tbug decided to help Grandpa carry the feed into the barn so I drug the sacks to the back of the tailgate so they could grab them. I stayed at the truck though to watch Abug and make sure she didn’t decide to nose dive off the tailgate.

Then Abug and I jumped in the front seat of the truck and moved it over to the trailer so we could hook it up, load up the horses and head to Wayne’s house.

Once we got to Wayne’s house Abug and I stayed on the outside of the fence for a few minutes while they warmed horses up. Our horses hadn’t really been ridden in about a month to a month and a half so I didn’t want her on one that might act up. 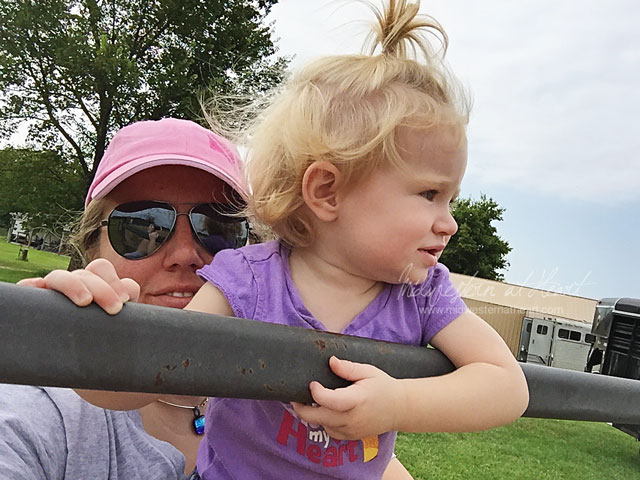 She entertained herself crawling on the grass though. Sadly I think this is her first experience of just being sat down in the grass like this. Wayne’s yard was a good yard for her to be crawling in. Someday ours will, but not right now. Long story! 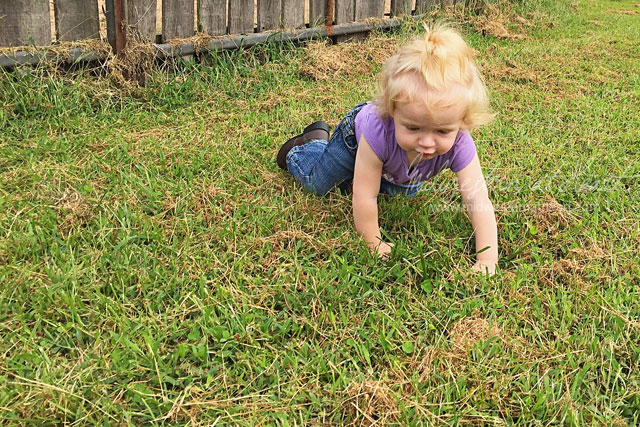 Then Abug got to jump on Aloha with sissy. She had an absolute blast. I just hope, like with the water, that she continues to enjoy riding horses. By the end of the morning she was “riding” by herself. (Translation she was sitting on the saddle, Sissy had one side, I had the other and grandpa was leading her.) Aloha is one of those kid broke horses. Yes, even a kid broke horse can have their moments, but she is one of the soundest horses for kids around. 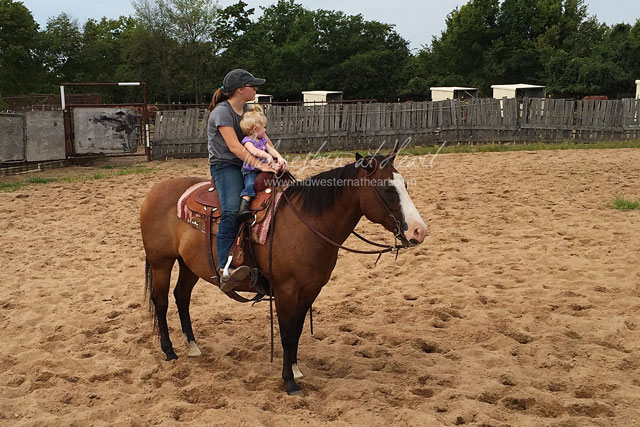 Dad and I switched off riding Blonde Barbie. Yes, that has become her name, her other name is Snookums. But she is prissy enough to be a Barbie… 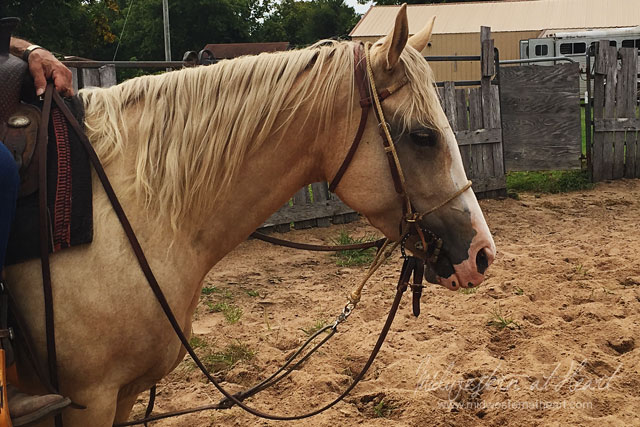 Wayne has a mechanical cow (remember we show cutting horses) and it wasn’t working. He and dad discussed it and decided to try dad’s remote on Wayne’s motor box and it worked so luckily it turned out it was just Wayne’s remote that was having problems. We first started off working Buffalo but then moved to the mechanical cow. When that happened Abug and I stood along side the inside of the fence until she got fussy, then I took her out to crawl around in the grass some more. It was nap time after all….

It was funny because she crawled away from me and went to the gate. She had fun playing peek-a-boo around the gate post and playing with the chain. Aw, to be so easily entertained, wait… I could do that maybe. ha! 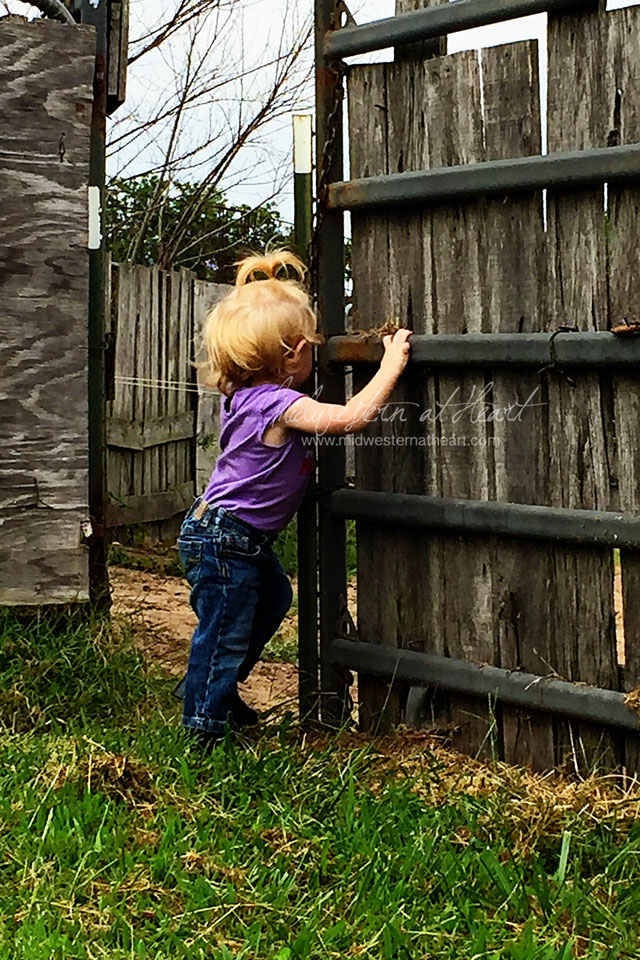 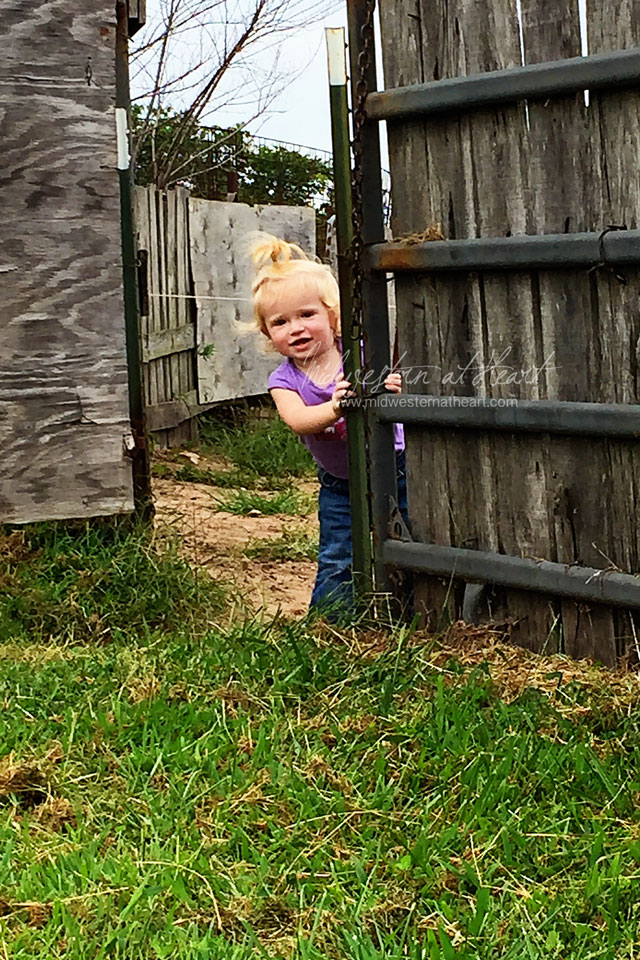 After we left Wayne’s we went home, let the horses out and then were about to leave when my dad said he was going to go get lunch. My mom was out of town so Tbug, Abug, and I couldn’t let dad eat by himself so we went to eat with him.

In the past years this restaurant has been many different things. At one time they had a bar even. They’ve recently opened back up (I don’t know how recently) and dad gave us the option of cheeseburger or Mexican. I went Cheeseburger. I figured this place used to have good food, if it was anything like the past it still had to be good. Let me tell you, it didn’t disappoint. 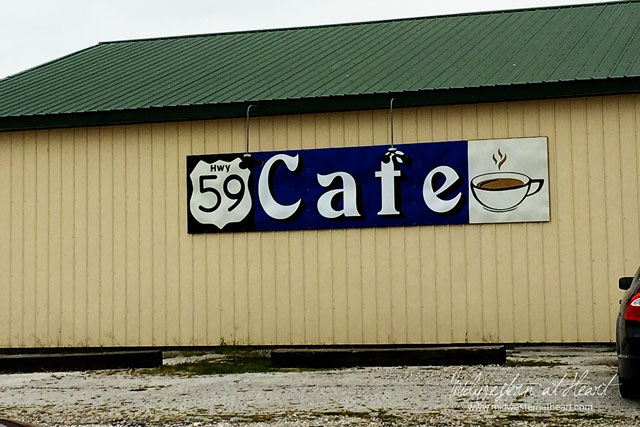 Hubby called as we were ordering asking us where we were. I told him we’d gone to eat lunch with dad and he said that was fine, just making sure he didn’t need to meet us somewhere or get us something.

I got a Bacon Cheeseburger and Fries. Okay, these fries are what make it totally worth it. If they aren’t fresh cut, they’ve got me fooled! Tbug thought I was nuts because I was dipping them in mustard. I asked her if she’d tried it, she said no, so because of the 12 time rule she took a bite. Maybe not her favorite but she didn’t think it was all that bad either. 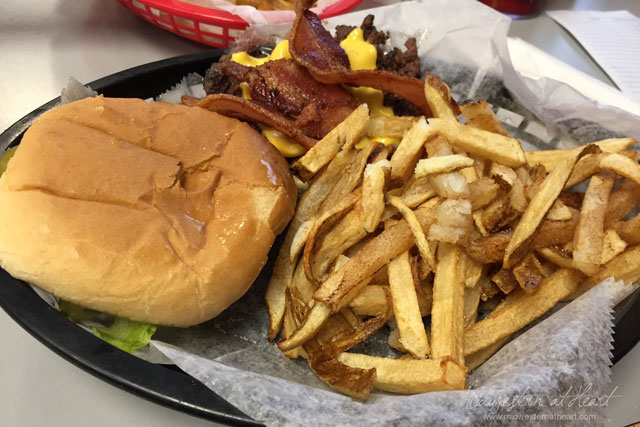 Hubby and his dad were working on our hot water heater all day Saturday. So we live in the country, therefore we’re on well water. When we moved in we had a water softener but the house sat vacant for so long that the salt and everything had formed a solid rock in the bottom of it and one night we were taking a shower and ran out of water all together. That was a fun night. So hubby took the softener out of the house so we could finish our showers and we never put it back in.

Jump forward about 4 years and he’s been tearing the softener apart seeing if he could get it back working. Well our hot water heater had been acting funny lately. Oh the joys of home ownership, so he decided to tear it apart. This is all the iron that came out of the water heater. That shouldn’t be there…. And the heating element was just caked with it. So we have a new element, less iron, a water purifier on the incoming water and hotter showers. 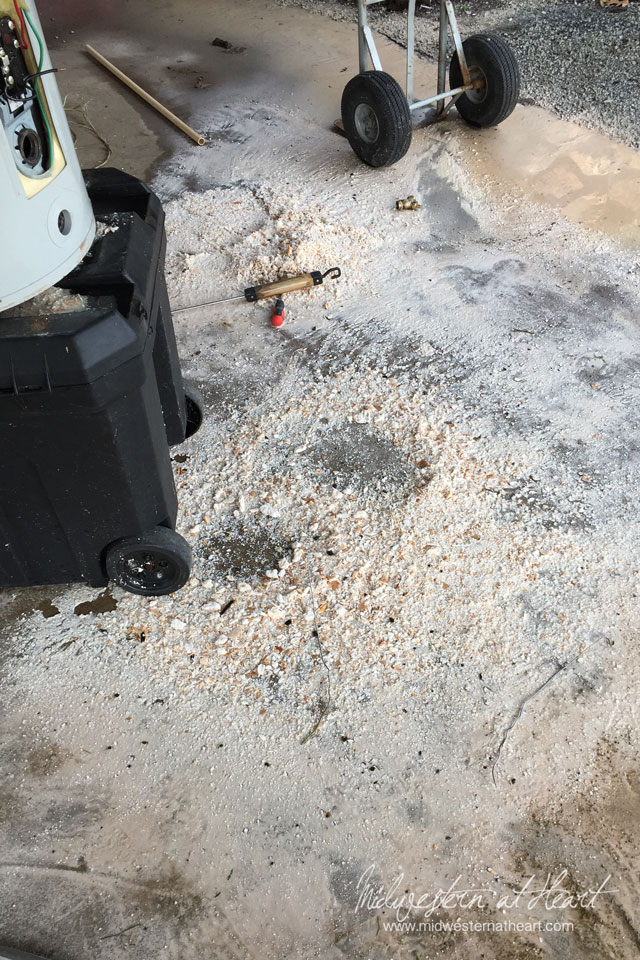 A couple weeks ago we were talking to my grandma about the fish that we caught in Florida when we went Deep Sea Fishing. She wanted us to wait until a weekend that Tbug would be with us before we fixed it and this happened to be the weekend. 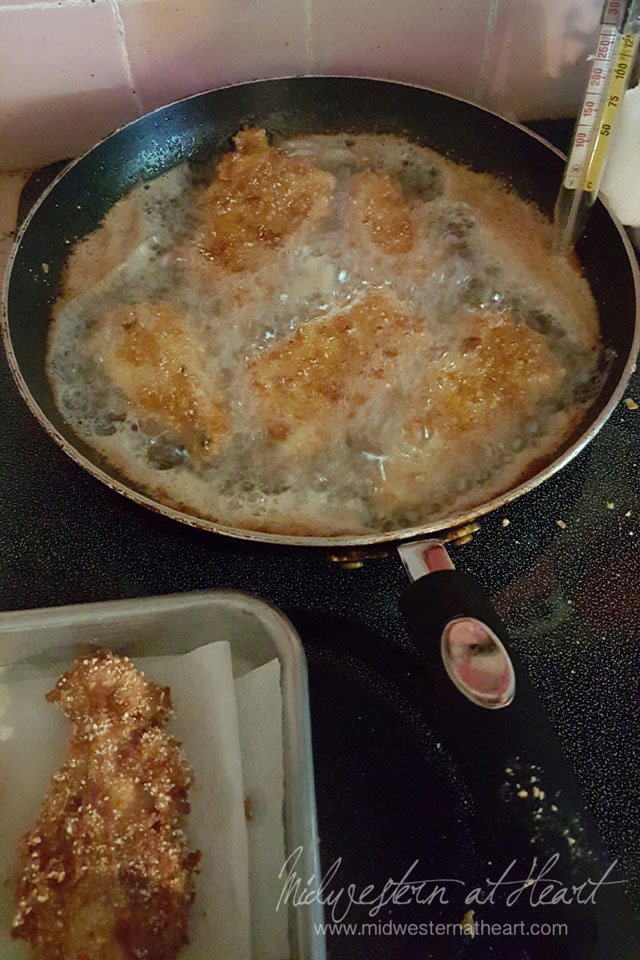 I’m not a fish person. My mom asked me how it was and I told her she needed to ask someone who liked fish. Okay so here’s my take on it… hubby fed me a few pieces right as they were cooked. Not to bad. Then later at dinner I tried some that had been kept warm and I swore it tasted like the cutting board we prepared it on. He thought I was nuts. See, don’t take my word for it. Abug ate every piece on my plate I didn’t. So apparently it was just me.

Then after dinner Tbug and I did dishes for grandma and then we all gathered back at the table. I suggested we play a game of Aggravation. We had soooo much fun! 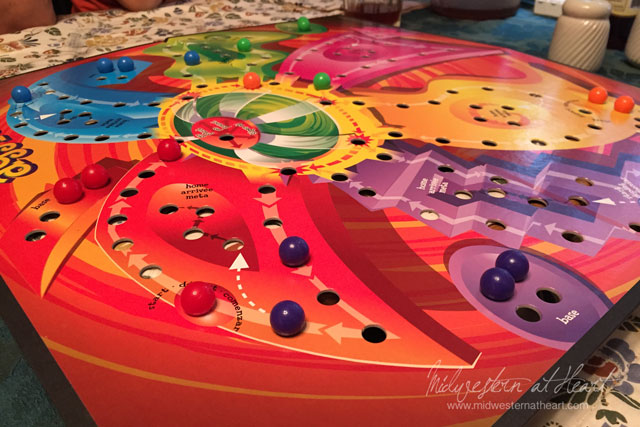 Have you ever played this game? If not… you should… it’s fun and aggravating!