Let’s get through Mermet Springs (Day 1, Day 2), what do you say? So what I’m telling you is… we’re going to have pictures GALORE! Just know, you’ve been warned!

Friday morning as we were headed out to Mermet Springs from Metropolis we passed by Hardee’s. Jared mentioned it so Saturday morning we decided to grab breakfast there before heading to dive. Have you had their Pork Chop Breakfast Sandwich? Oh goodness, you’re in for a treat with this one… no joke! 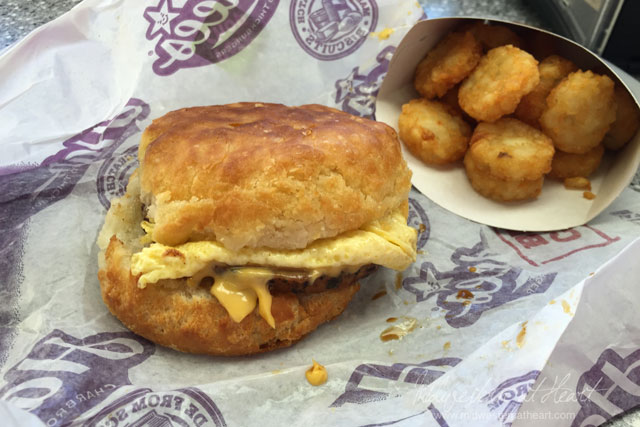 One thing I’ve learned about the group at Mermet Springs is they’re out to help make sure you have an enjoyable dive as well as an enjoyable trip. I even got an interview with the owner for the Scuba Blog I write. I got the back story on how they got the Boeing 727 from the movie bought as well as how they got it into the quarry for people to dive in. Pretty sweet story, really! Now the little ol’ man who has sat on the dock the last 3 years now is adorable. 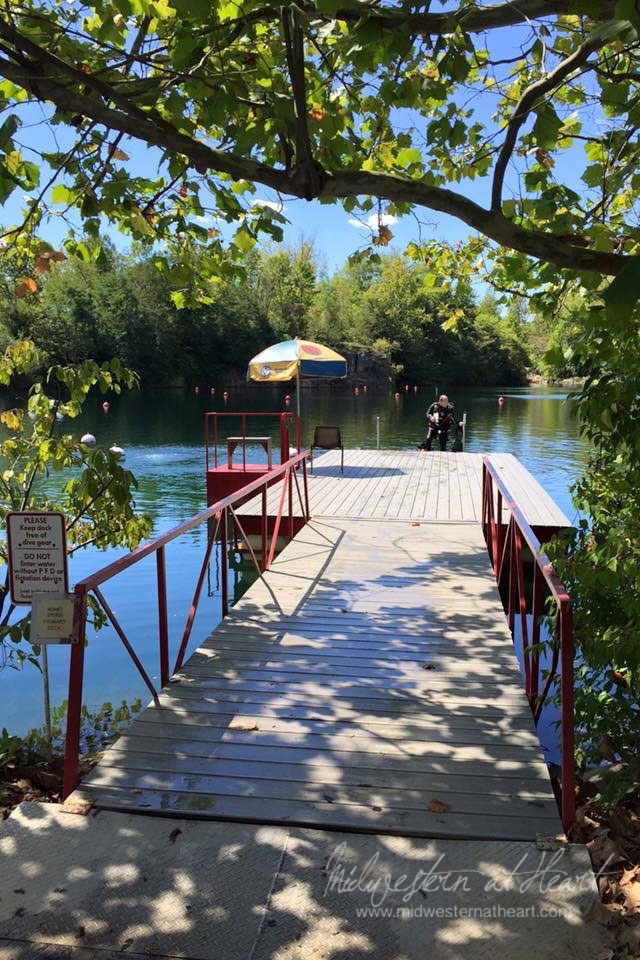 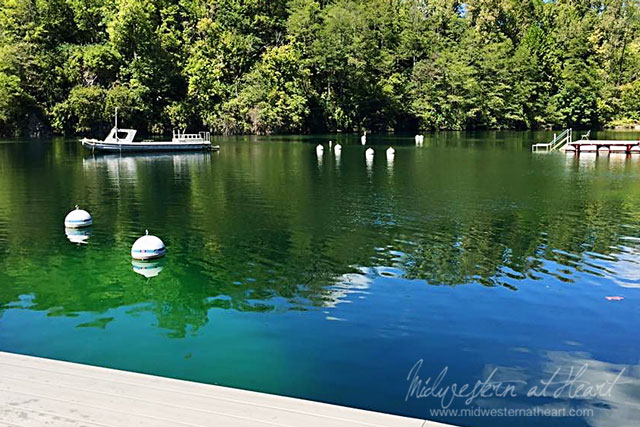 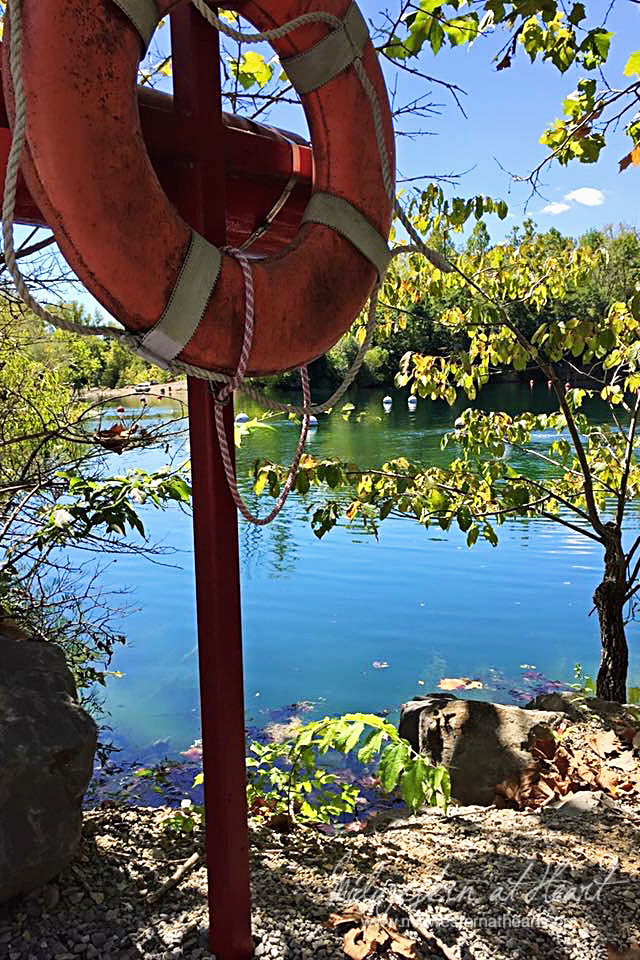 We joke that if there is food, they will come, but truthfully… we always have food! 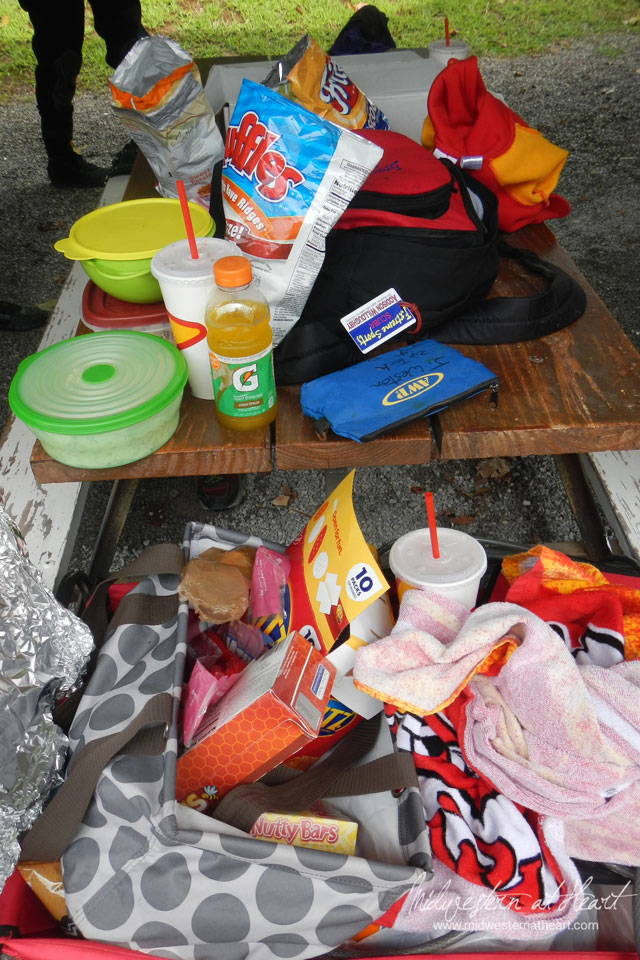 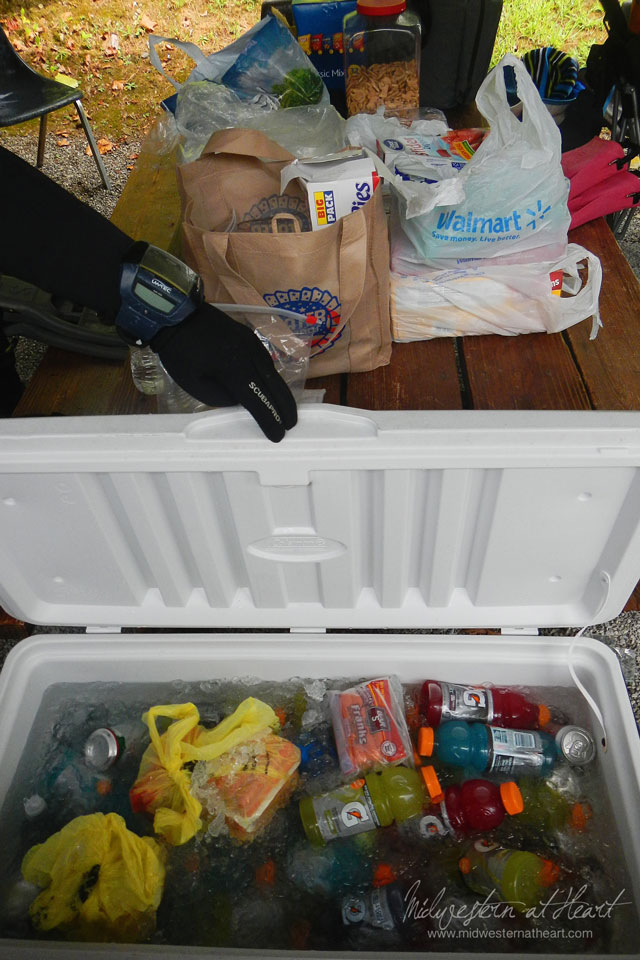 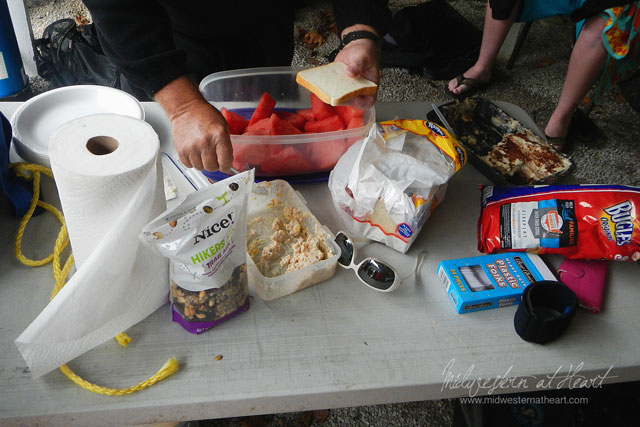 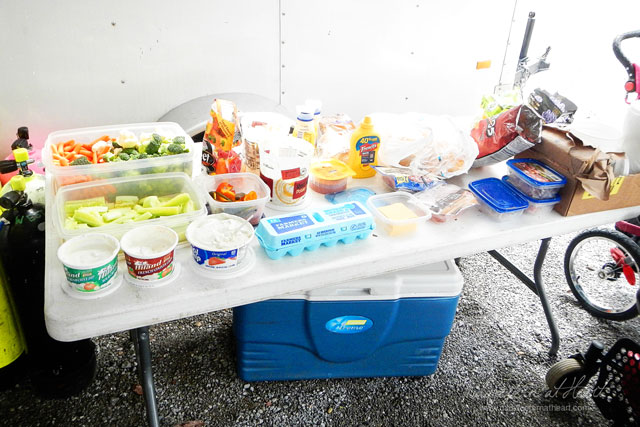 So we are certified divers through SDI where Mermet Springs is PADI. It’s just different agencies. But we had to not only represent our diving… but come on… Chiefs played Sunday and we have 2 Red Coaters who dive with us (or should I say we dive with them?)… we sooooooo had to represent! 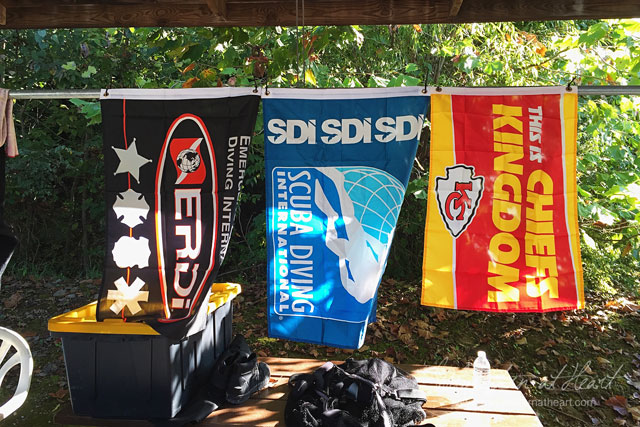 Did you know/remember that Superman is from Metropolis? And we were staying in Metropolis. 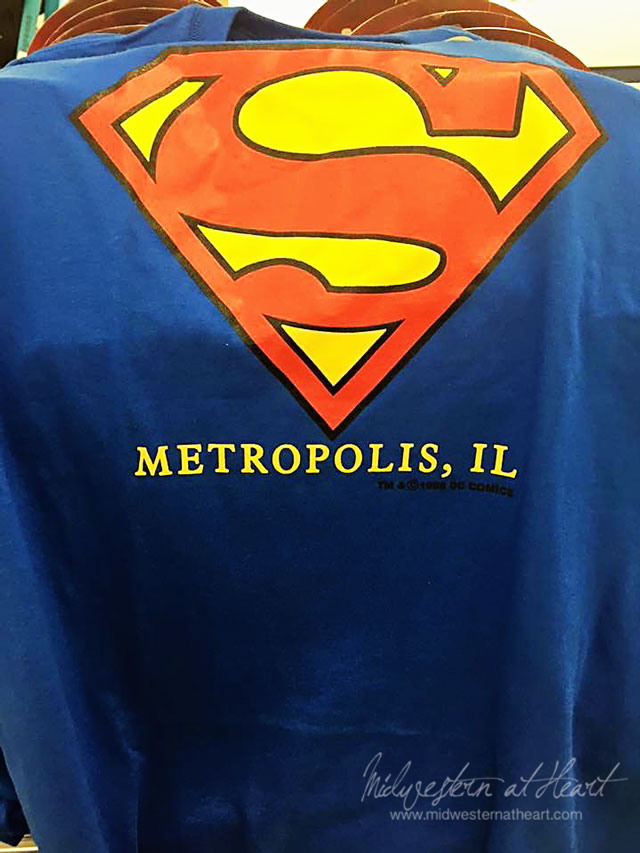 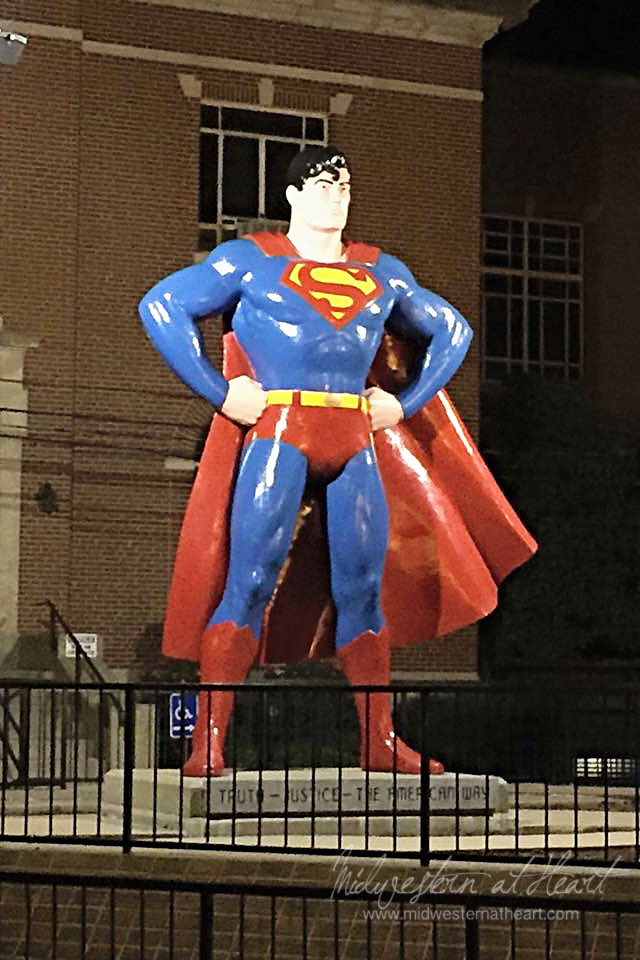 Tradition is for Saturday night to eat at Fat Edd’s. 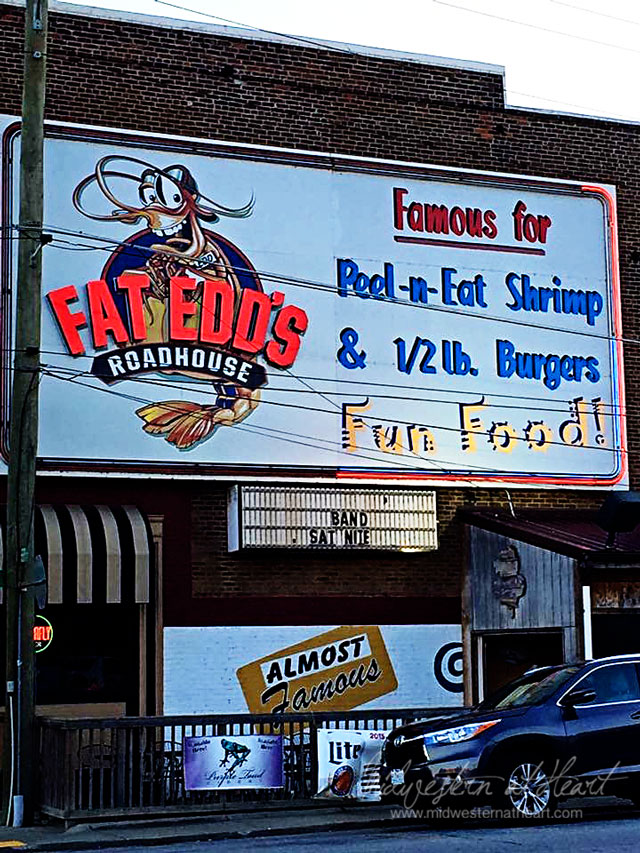 I can’t talk about the group of people I hang around with enough. They’re just flippin awesome! 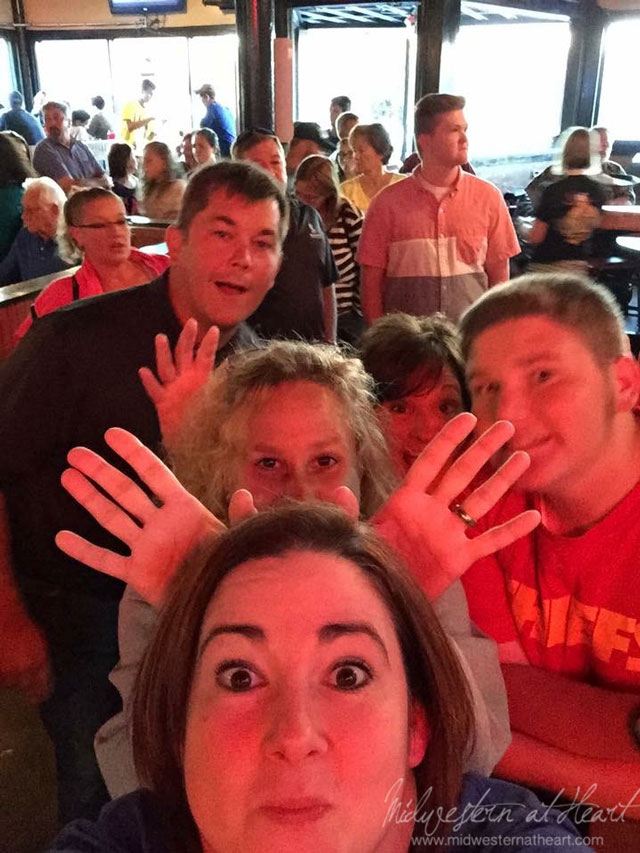 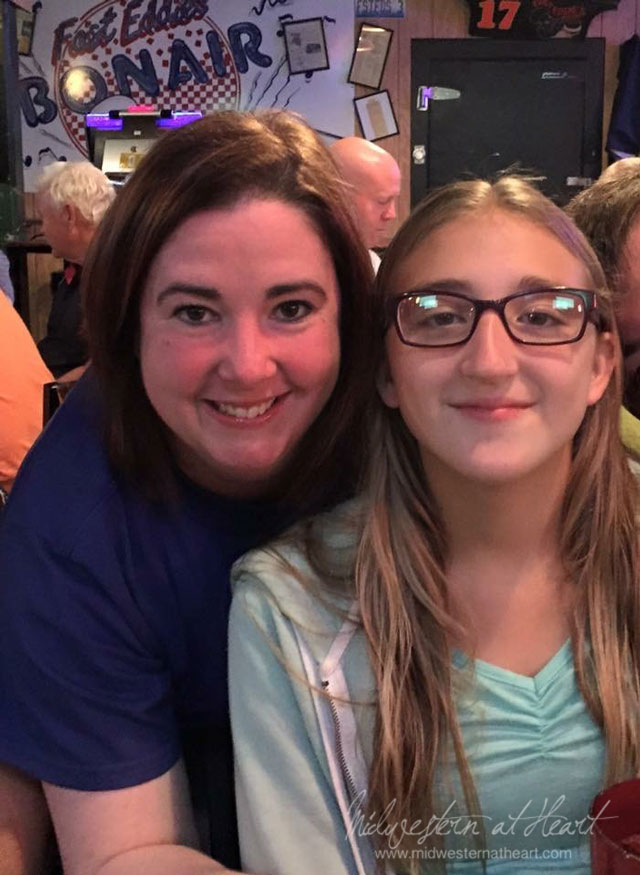 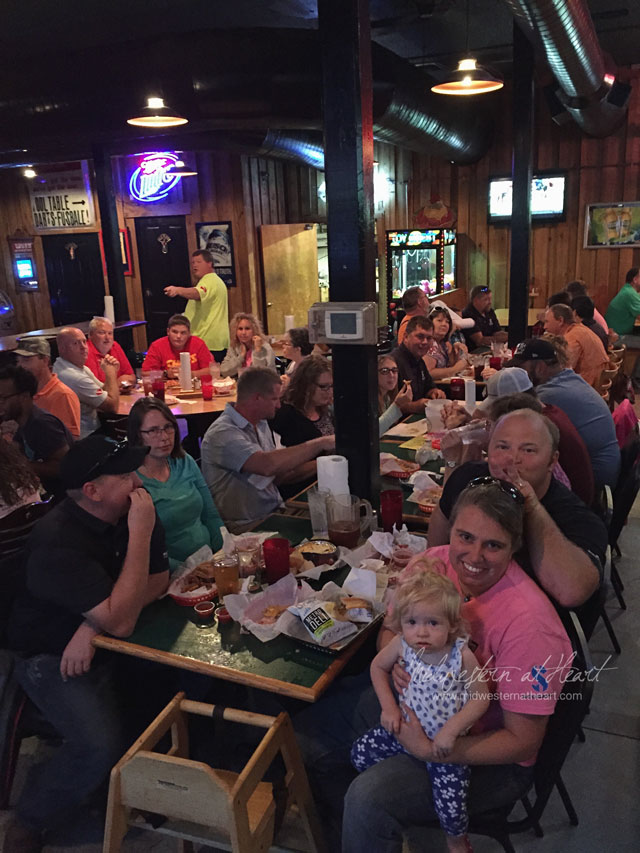 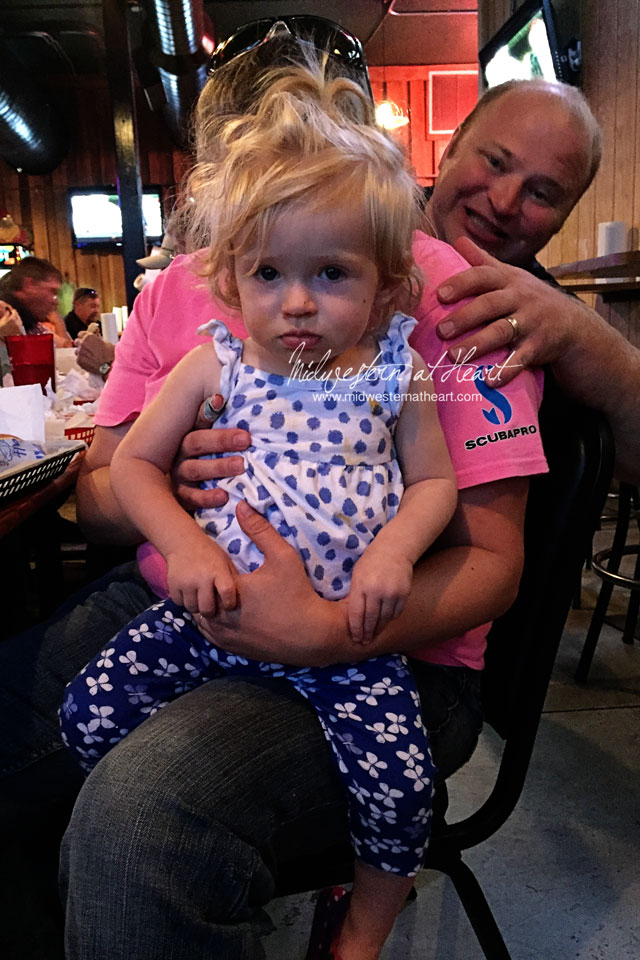 So they’re known for their peel and eat shrimp. I don’t care for it, but a lot of the group loves them so there was plenty to go around. 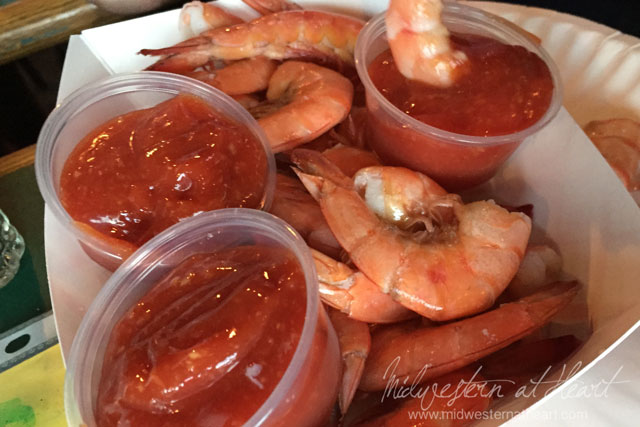 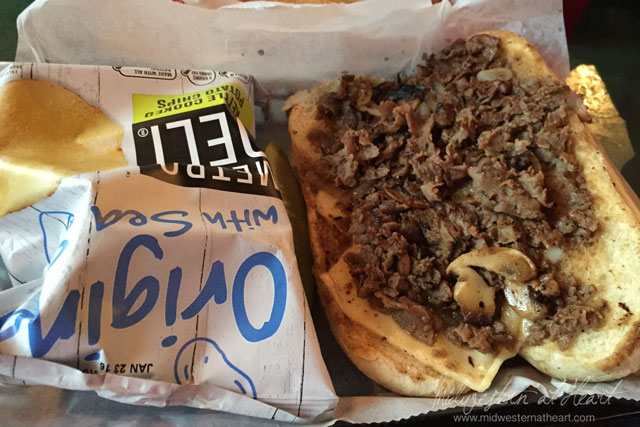 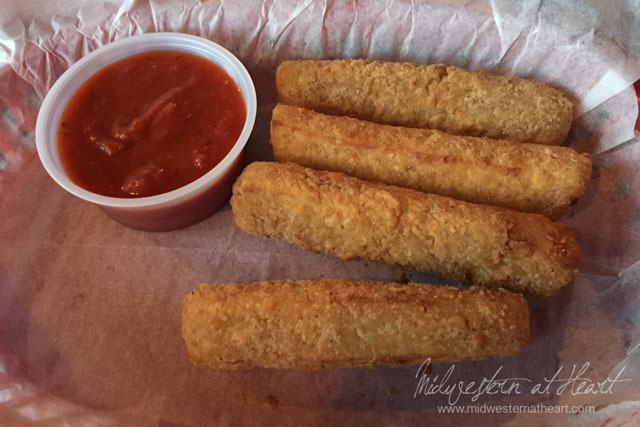 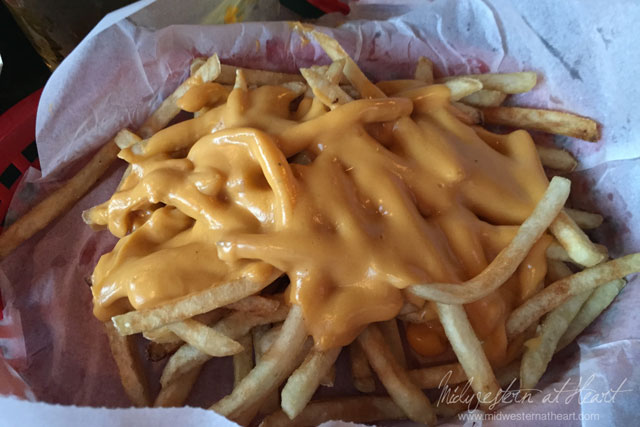 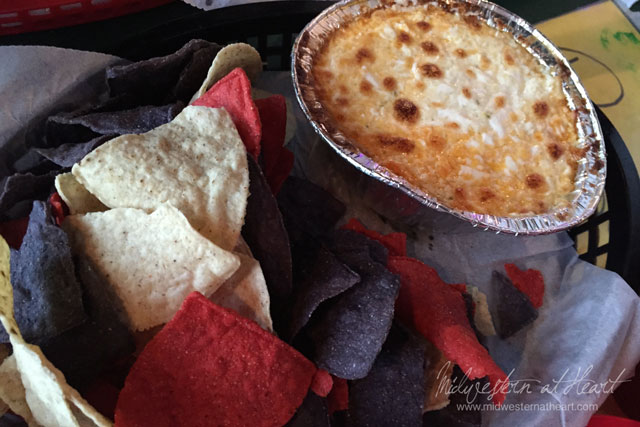 Potato skins. Actually I didn’t even try a bite of these but Hubby and Jared raved about them. 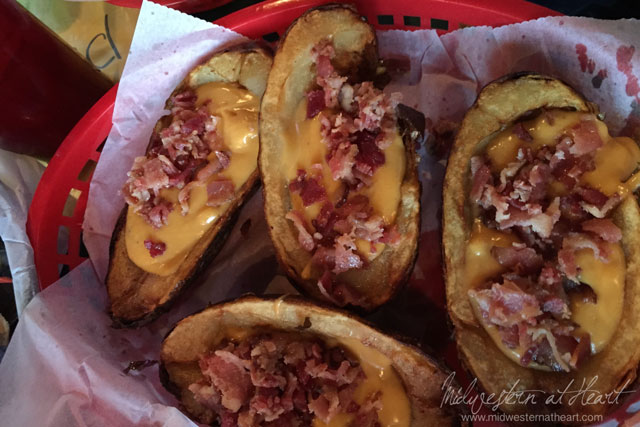 Hubby’s Kabob’s. The steak was out of this world. I didn’t try the chicken. 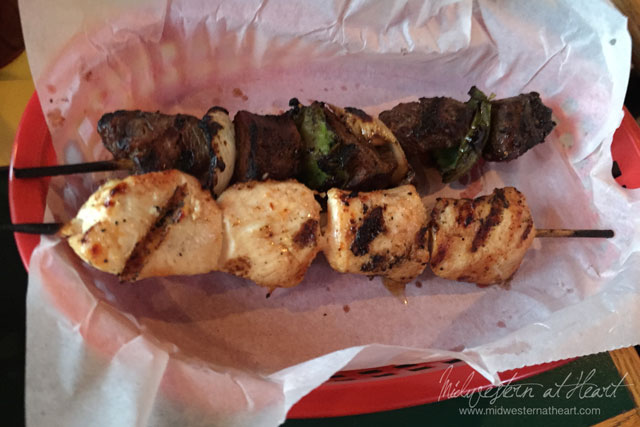 Memaw got a club sandwich. 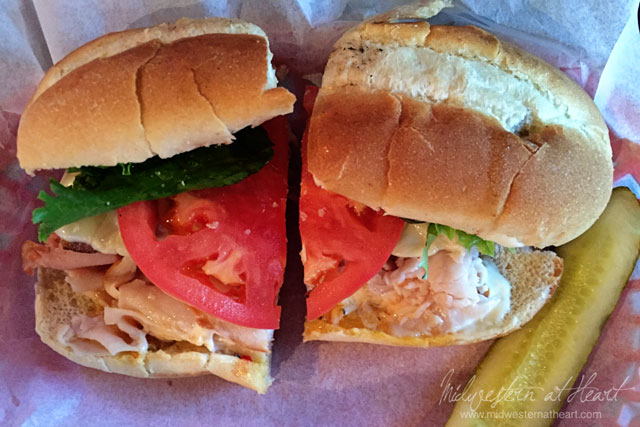 The group I rode with didn’t dive on Sunday. We just decided to head out so we could get home at a decent hour and we didn’t have to haul butt to get home late. But I received this picture of Deb drying her hair. I loved it! 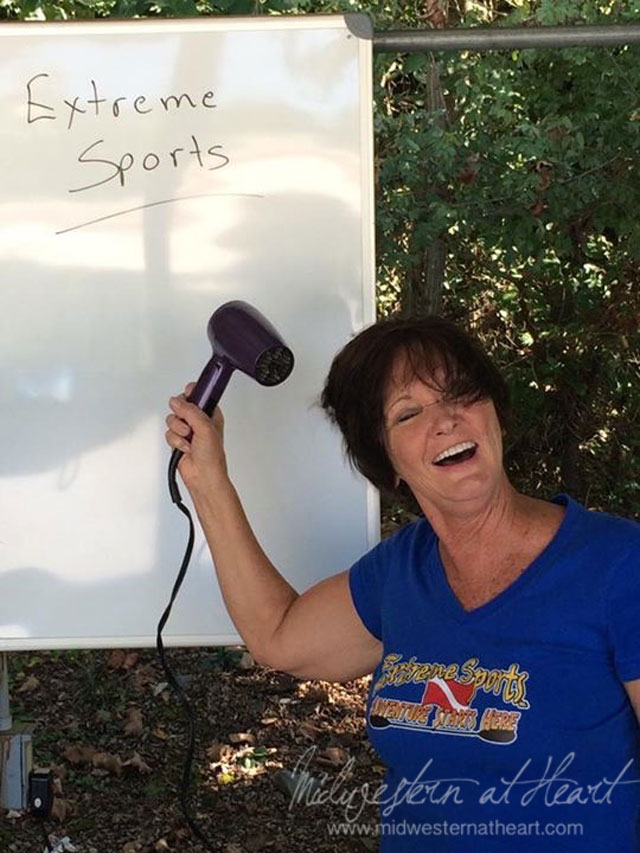 On our drive home, around 11 we decided it was time to start looking for lunch. We were kind of in the middle of no where southern Missouri so when we got to Van Buren there wasn’t much so we went on to Mountain View. There was some Mexican restaurant so I plugged it in to my directions. It never told us we reached our destination so I looked down and realized we passed it. Jared was driving, took a quick right turn, we turned around in a parking lot, he almost missed the exit drive and about went over the curb, we got back out on the road and went left. It said it was on Hwy 60 next to the Subway. We didn’t see either so Jared took another quick right turn and we thought we’d see what we might find.

That’s when we found Los Amigos. It was noon, we were hungry, it was Mexican, so we decided to give it a shot. It was a good thing we did too, because yum! 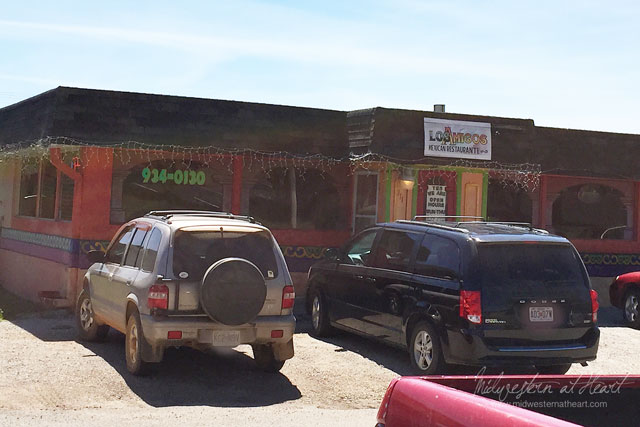 Hubby and Jared both got this. I have no idea what it was called but it was Chicken, Steak, Shrimp, peppers over rice covered in cheese. They both said it was really good. Abug tried some of the cheese rice but that was it. She wasn’t having any steak/chicken for some reason. 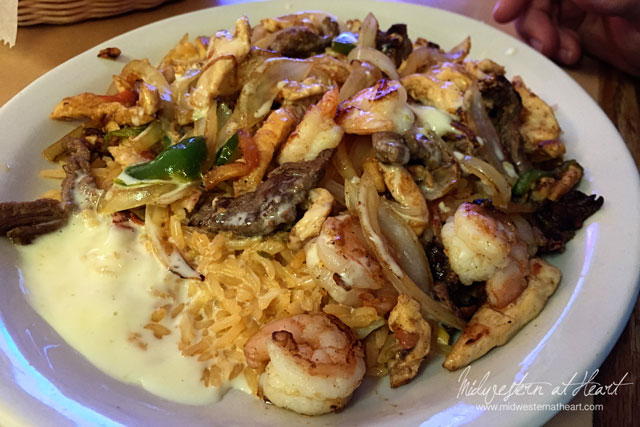 I got some number they had. It had a Chile Relleno, 2 Cheese Enchiladas and Rice (I omitted the beans). I just love Chile Relleno’s.  Abug loves Cheese enchiladas. 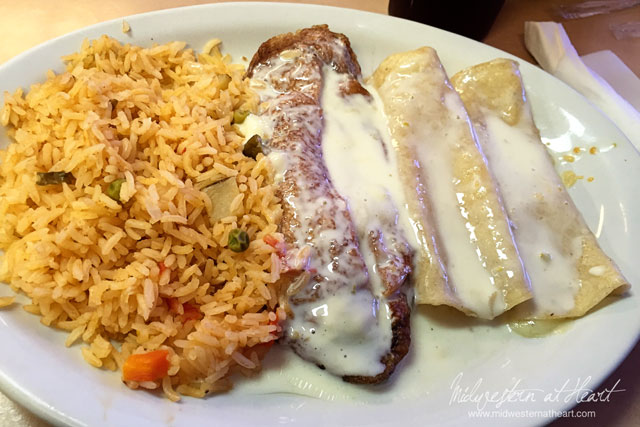 Karen got a Chicken Chimichanga and Memaw got a Shrimp Chimichanga. I have no idea what they thought of theirs….

I do believe this was a good stop though! YUM!

Then Karen and hubby were digging in the trailer for something so Abug and I walked around on the grounds. I just loved this water tower. It’s like that song talking about painting your name on the water tower in a small town. I’m not sure names were painted on it but there was a lot of writing. 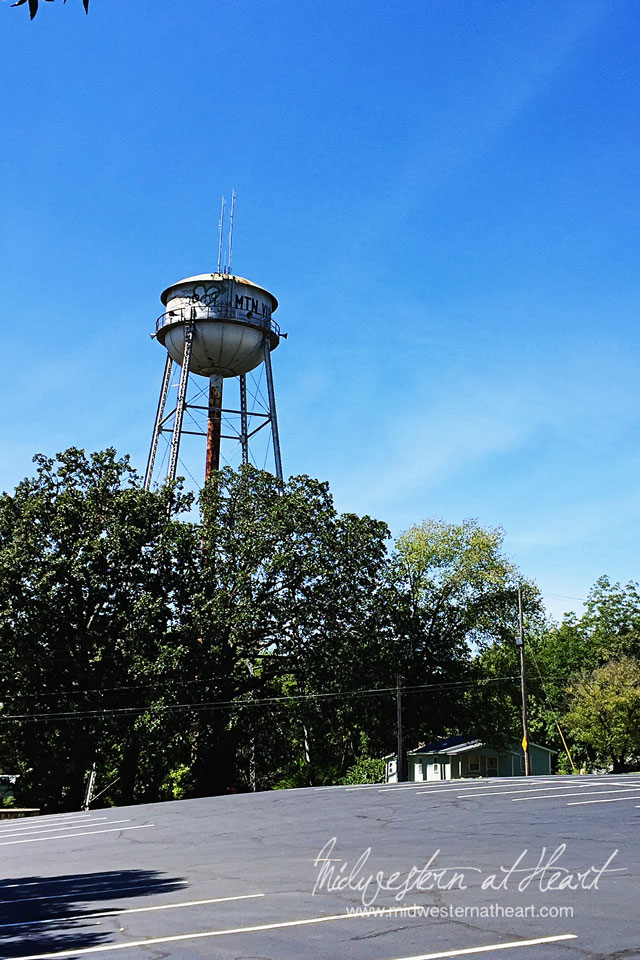 Then once we were stuffed, it was time to make the long trek back across Missouri and head home. On the way home I decided to send Doti a picture of her home town exit again. I’m nice like that! 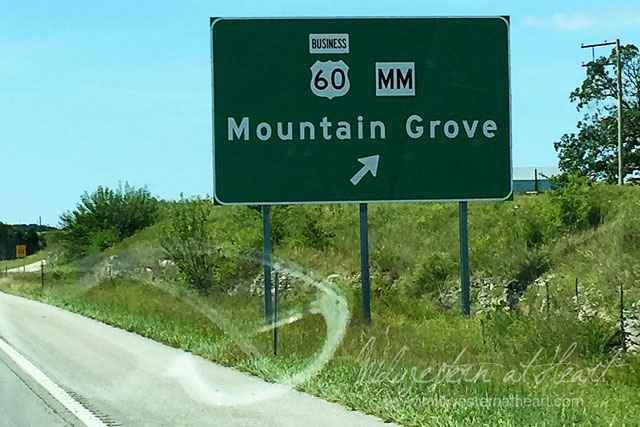 And that ladies and gentlemen was all this trip to Mermet Springs wrote. Another great year in the history books!