Here it is 9:45pm on a Friday night. Is it sad that I’m home and sitting in bed? Wow, that’s so not how life was even a few years ago… some Friday nights I was getting Mike & Ike’s bounced off my head (lol love you Earl). I had other plans for a post for today, then last night hit and I had an allergic reaction to something. I don’t know what but my lip swelled up huge! It was CRAZY! This is the second time in 2 weeks this has happened. But nothing seems to be the same to cause the reaction. Anyway so I came home and took 2 Benadryl and well…. I fell asleep. I woke up this morning groggy, my lip was still swollen, I took another Benadryl and I was out again. (and no, there are no pictures… well there are but I’m too self conscious to post those on the internet!)

So since this post was written and waiting to be published sometime the beginning of this month, now seems like as good of time as any, especially since I now have 27, almost 26 days until Comps. Maybe… just maybe I’m having an allergic reaction to all the stress from studying for Comps while still taking classes…. Just a thought.

The other day I was camped out in the library between my morning class and waiting for study group. I sat for so long that when I stood up I felt a vibration in my legs. I’m pretty sure it was the blood pumping through my veins again.

Okay so this is the month of doom. I have comps the end of this month. Yes, I know I mention it a lot but I’m kind of freaking out! I have 3 chances to pass and then I don’t know what happens. No pressure or anything.

So basically they pass it out, we answer short answer and essay. Then there is an odd number of American professors and an odd number of British professors (specialty not where they’re from….) who grade it. It’s pass or fail. You have to have majority pass or else… you fail. Again, no pressure.

So anyway I’m doing an update on my list and where I stand… well because if nothing else it helps keep me on track, it gets my cheerleaders screaming for me and whatever…. 4 weeks baby, 4 weeks (or something like that)

Poetry
Anne Bradstreet: “The Prologue,” “The Author to Her Book,” “Contemplations,” “A Letter to Her Husband, Absent upon Public Employment,” “Here Follows Some Verses Upon the Burning of Our House”

Poetry
Walt Whitman: “Song of Myself,” “Out of the Cradle Endlessly Rocking,” “The Wound Dresser”

And because every post needs a picture… circa 2003 at the Ozark Empire Fair. I used to be able to sleep anywhere…. 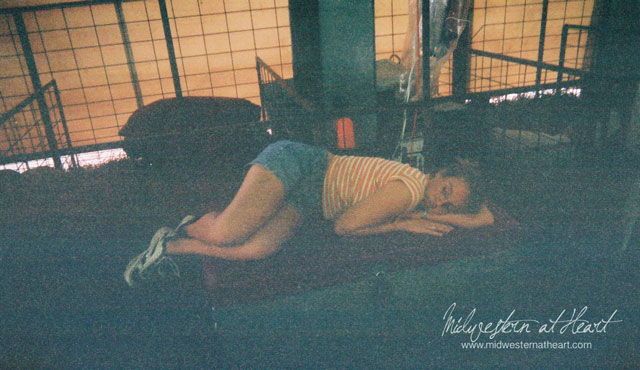