It’s Throwback Thursday on Friday.  Yeah, doesn’t make sense maybe but that’s just how it worked out.  Bonnie over at The Life of Bon has been doing a link up all summer of Throwback Thursday’s and I decided that I would participate today for yesterday’s theme.  So what, I’m a day behind… it happens.

So, I loved my senior year of high school.  I drug my feet about applying for colleges and I drug my feet for applying for scholarships.  I thought my parents were going to have to hog tie me and drag me to college.  Yup, it was that bad.  So I moved into my dorm at the last possible moment I could and I hated it.  I came from my parents house where I had a room to myself and a bathroom to myself.  I wound up having to share a little room with another person and I was in a dorm where I had to share bathrooms with 30 other girls. 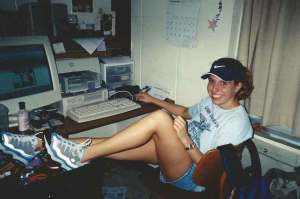 I didn’t know really anyone when I went so I felt miserable and alone.  I was dating a guy who was younger and was back at my high school, so I felt even worse because I was away from home, no friends, and waaaaaayyyyy out of my comfort zone.

I am proud to say I didn’t cry, not once while I was there even though for a while I was miserable.  I had never eaten alone except in the privacy of my own home, so for the first little bit I ate popcorn pretty much every meal because it felt weird going to the cafeteria by myself.  After a couple weeks, a guy I went to high school with who was a few years older than me started inviting me to eat lunch with him and his friends, and eventually I’d meet up with them for dinner.  I finally quit eating popcorn all the time :).

One night, a girl on the floor (Thing 1) stopped by our room and admired the rug I had brought from home.  From then on she and I hung out together as well.  And from that, she convinced me to start doing dorm “get to know you’s” and I wound up meeting the second close friend (Thing 2) I had.  Side note, that’s what they were referred to at my house by my family, but I have no idea why… lol.

I had a tendency to stick out wherever I went because most people were from Kansas City area or St. Louis area and most had never been around horses, cows, sheep, livestock in general and agriculture.  Oh and did I mention I was an Agriculture major?  I met one girl who knew all about that, to this day Janet and I are still friends.

My parents wanted me to get into a sorority, the Agriculture department had a Professional Sorority that they wanted me to join.  I wanted no part of it however I finally got convinced 2nd semester of college.  Janet, Doti and I happened to be the only 3 who rushed the sorority so we joined together.  This is how I met Doti!!

One thing about going to college is no one, I mean no one, anyway at my college cared even if you came home sometimes.  So when I’d come back to my parents, every now and again we’d butt heads about when I was supposed to be home.  Strange thing is as long as they didn’t push me, I was usually home by 10:30 or 11 at the latest anyway.  Weird, I know.

As I said, I started making friends which made life sooooo much easier in college.  However, I still couldn’t really stand my roommate.  She’d drive me up the wall, mainly by singing all the time, everywhere.  And really loud I might add.  But one thing she was good for… dressing me up for Halloween.  My friends went into my roommates closet (with her permission) and dressed me up, as get this… a Hooker.  Oh yeah… nice, right?

Somehow, and I have no idea how, we became friends with a group of guys that lived a floor above mine.  Boy did we ever get in trouble with those guys.  Our dorm was every other floor boys, every other floor girls.  Guys weren’t allowed on girls floor and girls weren’t allowed on guys floor after 10pm Sunday through Thursday.  They could be there after hours on weekends as long as if they left the room they were escorted.

So this group of guys, one night we got trapped in their room after 10pm.  Sadly, the boys RA knew about it and sat in a chair in the middle of the hall waiting for us to come out so that he could write us up.    We knew it and the boys kept running in and out of rooms trying to see if he had left.  Finally around midnight the boys picked a blanket up, held it between them and the RA, ran all the way to the RA, back to the door for the stairs and back into their room.  The RA shook his head, said that was the best one he’d seen yet to date and said, I’m going to bed boys, make sure the girls get out.  The next day we were “warned” about being up there after hours.

The end of my Freshman year ended with me studying abroad in Costa Rica.  Yup, I’m roping a calf there.  What can I say, we were at Agriculture colleges in Costa Rica.  It’s all good!  I even got to feed an Iguana a banana.  How many of you can say that?!?! 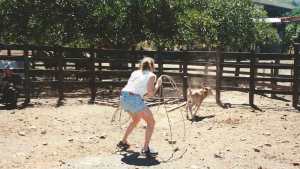 I will admit that I drove home every weekend for the most part.  I guess it was a way for me to get away from my roommate that drove me out of my mind.  Sad but true.  So there is my first time living on my own…