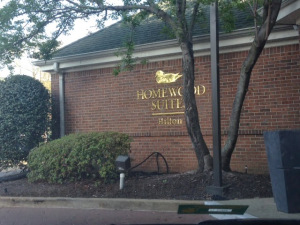 Okay so random thought on my brain right now… I’m hungry. Looking at my food posts like y’all do, is making me hungry. That could be because it is noon and I haven’t eaten since breakfast and baby girl is yelling at me to eat mommy, eat!

Anyway thought I’d pop in and tell you about the accommodations that we had while we stayed in Memphis that one night. Hubby went online and found us a really good deal to stay at the Homewood Suites which is a Hilton property there in Memphis.

Typically they are set up for extended stay visitors so the rooms are set up more like a one-room apartment. Very very nice though! Our room had a fireplace and there was a note on the table that said that you could get one log free for it, from there they could be purchased. The living room had the couch, a chair, a television, and a small table and around the corner was the kitchenette which had a full-sized refrigerator, a stove, cabinets, sink, dishes, and even a dishwasher.

When you entered our room, I told you, we’re going to get spoiled by getting rooms with a King Sized bed :). Hubby and I, no matter what practically sleep on top of each other whether we’re sleeping in a twin-sized bed (which we’ve done) to a full-sized bed to a queen-sized bed to a King. But obviously, in that king, we have a little more room to sprawl out even though we’re still touching 🙂

The bathroom was next to the bedroom. There was the room with the toilet and the shower, then there was a sink on the other side of that door. You know, so you can get ready while your husband is showering and you don’t get the steam :). I even loved the note that Housekeeping left us.

Even though it was an extended stay hotel, they had a continental breakfast in the morning. Being a Sunday morning when we ate there we had the option of a Cheese Omelet, Sausage, Rosemary Potatoes, cereal, waffles, muffins, fruit, juices, coffee, and milk.  The plate on the left was mine and the one on the right was hubby’s but that was because I really wanted a donut from Dunkin’ Donuts. Yes I know, he spoils me! (by the way, did you know the proper way to spell donut is actually doughnut.)

This was definitely a nice hotel to stay at, easy access to the highway and hey, we were close to Dunkin Donuts and Gus’s World Famous Chicken, what more could you ask for?