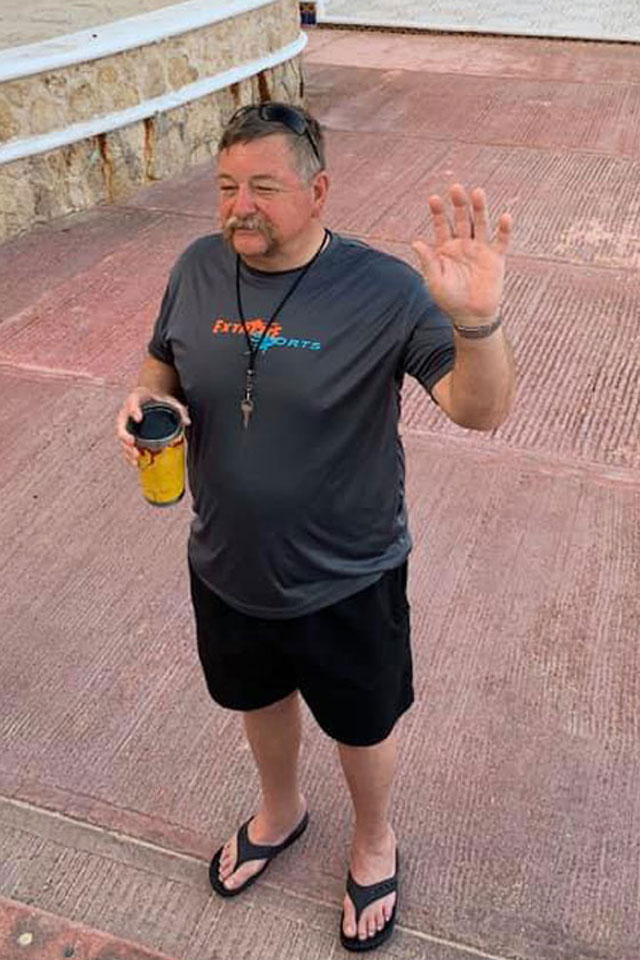 You will teach them to fly,
But they will not fly your flight.

You will teach them to dream,
But they will not dream your dream.

You will teach them to live,
But they will not live your life.

Never the less, in every flight,
in every life, in every dream,
the print of the way you
taught them will remain

I truly am at a loss for words. The person who has spent most of her life talking about something… or so I get teased. And while I was shy as a kid, if I knew you, I’d talk your leg off. I’m still shy but I’ll still talk your leg off. Don’t worry.

I have spent the last few days engulfed in a man and his family. It’s hard to believe this man was only in my life for 6 years.

7 years ago January, my husband and I got the chance to try SCUBA diving. Honestly, I was so apprehensive that first day that I almost didn’t go. I thought it was a special thing that some friends were doing because of their family and that we were just inviting ourselves in. Turns out, it wasn’t that at all. We had so much fun that first time, we went the next month to try it again.

In June that year, we wound up going to the lake and helping out during one of their Underwater Safari Hunts. Of course, we weren’t certified SCUBA divers, so we could only help on land, but we jumped in no matter what and helped when/where we could. The next week we were signed up for classes. 2 classroom classes, 2 pool classes, and 2 days in the lake and we were officially certified SCUBA divers.

That truly is all we ever had to do with them. But that’s not where our story ended with this bunch.

More of the Story

Hubby went on that fall to help them rebuild their website. And since I started my master’s in English and had this blog, I was asked to be their full-time blogger. Sure, why not. I was scared. I didn’t know what voice to write in or really what to write about. To say I was scared is an understatement. The first couple of posts were not so great. But eventually, I got my swing and just wrote. There are posts I’m not happy with and some I even want to delete, but I don’t. They were there and they had a time and place.

But this group of people became my extended family. I hit the jackpot and got a second set of parents, my kids got extra grandparents, I got brothers and sisters and yeah… a bonus family. But not just with this one family but with multiple families that all were each other’s kin. This is so super hard to explain, but this group rooted each other on just as my own parents rooted me on. It was amazing. Was… heck still is, amazing. We have each other’s back.

And then Thursday came to blow. For those who know me, I’ve never really been a fan of Thursdays anyway. No offense to Thursday.

Hubby and I had just left Abug’s parent-teacher conference, which was good by the way. We didn’t want to cook so we grabbed dinner to take home before going to get Abug from my parents. But we didn’t make it that far. On the drive, hubby got a phone call that said, “Dad. Hospital. Now.” Our hearts stopped. I quickly had my mom meet me to get Abug’s dinner and hubby and I were on our way to the hospital.

It rained most of Thursday. When we got to the hospital and parked though, we weren’t running to avoid the rain, there was an urgency to our run. The minute we walked through those ER doors, everyone met us with sad eyes. No one really spoke a word though. By the time we got there, there were about 15 people there waiting for news. The good news we were waiting for didn’t come though.

A guy that has meant so much to so many people for so long, gained his wings. He was headed to teach the pool portion of a SCUBA diving class. Instead, he had a heart attack. At around 6:20 that evening, we all got the worst news, He’s gone.

I know when this news came in, there were more than the original 15 + hubby and me in the waiting room waiting to see what would happen. This man was truly loved. Maybe even more so than he thought. By the time our group left, the chaplain told someone that she’d never seen such an outpouring like happened at the hospital that night.

Hubby asked that I write a blog post on the SCUBA blog as well as we put out a statement on Facebook. Those first 6 hours are such a blur. When I finally decided to come home that night, I couldn’t sleep. So I started researching, something I tend to do when I can’t sleep. I blame my English degree. And with all my research, a blog post was born.

I was then asked to create a slide show for the visitation and for the funeral. We all play our parts. And this is a way that helps me cope with things anyway so I said, absolutely. But the thing is, I saw a side of this man I’d never seen before. It was truly a blessing and while it hurt and sucks, it was the best thing ever.

So while words are still at a loss for me, and I keep waking up hoping this is all a bad dream… something truly amazing has and will continue to come from this.

So rest in peace and we’ll handle it from here. Thank you for the great example you’ve set and you’ve left some really big shoes to fill. Don’t be afraid to point us in the right direction if we need guidance.

The Day I Lost My Cool - Coronavirus Day 35
Cream Cheese Corn... YUM!
Nicknames to haunt you...
Let's Get Grillin'

2 thoughts on “Loss for Words”