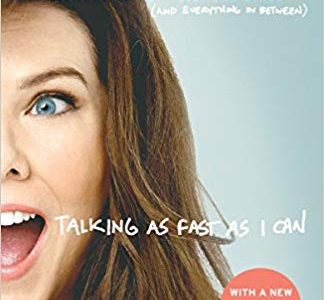 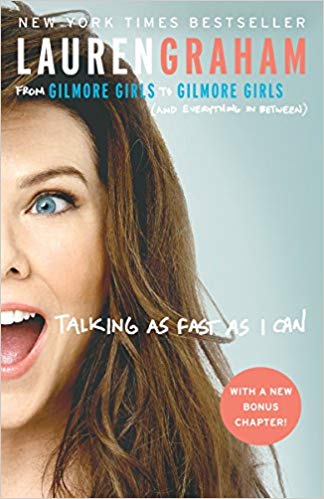 After reading about the Mitchell Sisters, I decided to sidestep and read about Lauren Graham. Some interesting things about this book…

Sometimes I start books and read more than one at a time because I get tired of a particular genre. It’s just something I do. If you go read my GoodReads it shows I’m reading more than one book. Honestly, right now I’m reading just 1 book, but still.

In Talking as Fast as I Can, Lauren Graham hits pause for a moment and looks back on her life, sharing laugh-out-loud stories about growing up, starting out as an actress, and, years later, sitting in her trailer on the Parenthood set and asking herself, “Did you, um, make it?” She opens up about the challenges of being single in Hollywood (“Strangers were worried about me; that’s how long I was single!”), the time she was asked to audition her butt for a role, and her experience being a judge on Project Runway (“It’s like I had a fashion-induced blackout”).

Some more things you will learn about Lauren: She once tried to go vegan just to bond with Ellen DeGeneres, she’s aware that meeting guys at awards shows has its pitfalls (“If you’re meeting someone for the first time after three hours of hair, makeup, and styling, you’ve already set the bar too high”), and she’s a card-carrying REI shopper (“My bungee cords now earn points!”).

Including photos and excerpts from the diary Graham kept during the filming of the recent Gilmore Girls: A Year in the Life, this book is like a cozy night in, catching up with your best friend, laughing and swapping stories, and—of course—talking as fast as you can.

Above I should have mentioned I was watching Parenthood while reading this book. An interesting fact and something interesting to do too. I was uber excited for the Gilmore Girls sequel…? to come out. And she (as in Lauren Graham) is just as confused as the rest of us wondering if that really was the ending. Really? I always say I want to channel my inner Lorelei Gilmore. I want to dress like her, talk like her, heck, drink coffee like her. Yes, I’ve watched Gilmore Girls beginning to end because of hubby. It is after all his favorite shows. He watched Friends for me. I even make GG references. It’s all good.

At first, I couldn’t get into this book. I don’t know why… I guess that’s why it took me some time to read, that and the fact that reading the hardback and I lost the hardback didn’t help. I’m glad I read it though. There was one part in there that was quite comical to me. I think she and I would be good friends for the most part. Lauren, if you ever decide to come meet me, my door is always open :).