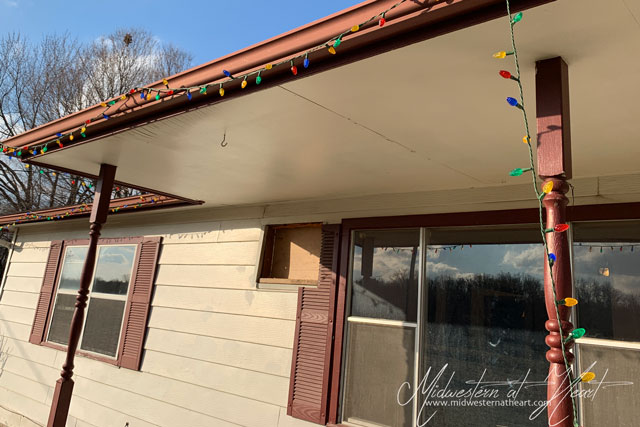 Thursday morning… November 29, 2018, a day I never figured would happen. It was an uphill struggle the whole way. I had a meltdown a few times along the way. We all did. It was frustrating as hell (pardon my language). If you’ve ever thought about buying a foreclosure house, my thought is… DON’T. Okay, maybe that’s being a bit melodramatic.

With all the buy/flip shows on HGTV and DIY Network, everyone seems to want to buy houses and flip them these days. That wasn’t our goal… for the most part anyway.

Remember back to September 2016, we sold our house. In fact, we moved out on our Anniversary weekend. That weekend felt like a slap in my face. These last few years haven’t gone anything like I thought they would. I can guarantee they aren’t anything like 25-year-old Nicole thought they’d be. Maybe that’s the fun in life… maybe not. I’m not really sure. But… needless to say, we sold our house and moved back in with my parents. That was just supposed to be a stepping stone to the next thing.

This year has had a lot of major plot twists in our life. It’s almost been frustrating to a point. It’s extremely helpful when you see those motivational things that remind you the next thing is around the corner.

Last summer hubby took on a new job at work. There were a lot of weeks we (Abug and I) didn’t see him because he’d leave for work before we were up and he wouldn’t get home until after we’d gone to bed. It turned out those long hours were totally worth it… it just took a while to see that. Late last fall hubby started looking for a new job. So instead of looking for a new place to live, we looked for a new job and looked at cities all around the country. Signing Abug up for school and dance classes seemed almost stupid because our future was so unknown at the time.

In January 2018 I claimed this as the year of Nicole. I’m pretty sure while maybe it is/was… it sure felt like that was the stupidest thing I’ve ever done.

So enter in the new job early summer. Late Spring this house finally went up for auction on the courthouse square. We only found out about it the Saturday before it went up at noon on Monday and we couldn’t liquidate assets fast enough to buy it. The previous owner died in my parent’s fence row a year ago the week of Halloween. We’ve only been trying to buy this house since then. Then because it’s a very slippery slope on the next set of details… and could turn into he said/she said situation… we’ll just brush over it as it was always just out of our reach just barely brushing our fingertips. That is… until it wasn’t.

This house went up for auction on an internet site after we’d made an offer to the listing realtor and it was rejected (because the auction site pulled the listing). We spent the better part of a day trying to find out the auction site, getting set up, familiarizing ourself with how the auction worked, etc. And… 2 months later (give or take), we finally signed the papers on the house.

Now comes the even more frustrating part. LOL. This is a fixer upper. Even the listing realtor mentioned to our realtor that it was. (Long story I won’t go into.)

So Last Thursday we signed our life away (LOL, just a joke… kind of) and bought this house. I kept referring to that day as #demoday because that’s just what happened. We immediately went home after signing and changed the locks. I went around taking A LOT of before pictures and then we demolished the kitchen and bathroom. In fact, Friday I had a bit of a meltdown moment and to relieve stress they let me kick in the wall. Let me tell you… that’ll do a lot for raising your spirits! Try it!

p.p.s. This is what I was hinting about for the last few months that I kept saying, I can’t tell you but I will soon. Sorry!

One thought on “Getting to This Point”