Hello, Monday morning. How was my weekend? Well… I just about broke my right middle finger last night. We had wicked weird weather that blew through. I was trying to open a door in a downpour while carrying the little one and my hand wouldn’t let go of the door handle. My silly hand is sort of swollen and still hurts this morning. Hello Monday.

But let’s focus on the fact that it has been a week since I was on vacation and I totally miss it. I love going on Vacation! This year we chose to go to San Antonio, Texas. We debated and hemmed and hawed quite a bit trying to decide where to go. Hubby really wanted to go to Sea World so our choices had to kind of involve cities that had a Sea World.

Last summer when we spent time down at my aunt and uncle’s house, they got my family hooked on watching Fixer Upper. Of course, the show that decided to go off the air this year in April. Sure… So we got a year of them + reruns. At that time, my aunt wanted us to go to Waco, but we just ran out of time. Truthfully, I had no idea who Chip and Joanna Gaines were so I was like, what’s in Waco? Well, now I know. 🙂

Since Waco is on the way to San Antonio, I asked hubby if we could stop by their market and hopefully eat at their restaurant. We figured being a Monday morning, pulling into the restaurant around 10:30 would work. Um… Hello. NO! The wait was 1 hour 45 minutes and there were NO parking spots. We decided to forgo the restaurant, but that didn’t stop us from going to Magnolia Market at the Silos.

Magnolia Market at the Silo’s 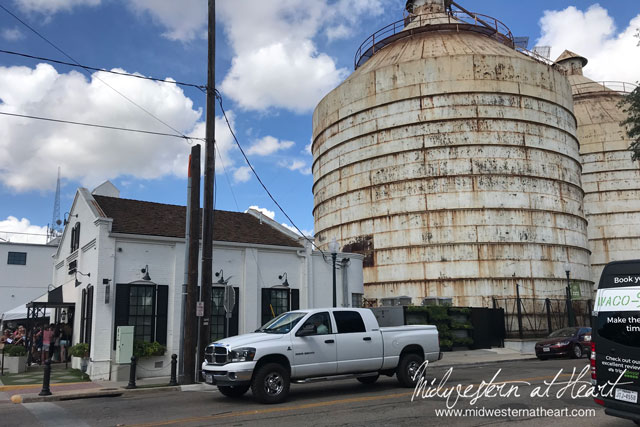 When we got there, the crowd was just as ridiculous. It’s Monday morning people. Shouldn’t you be at work… lol.

We finally found a parking spot about 4 blocks away on the street and walked up. It was a madhouse.  The little and hubby waited like 15 minutes just to use the bathroom (for the little, not hubby. He just allowed the older and me to walk around). 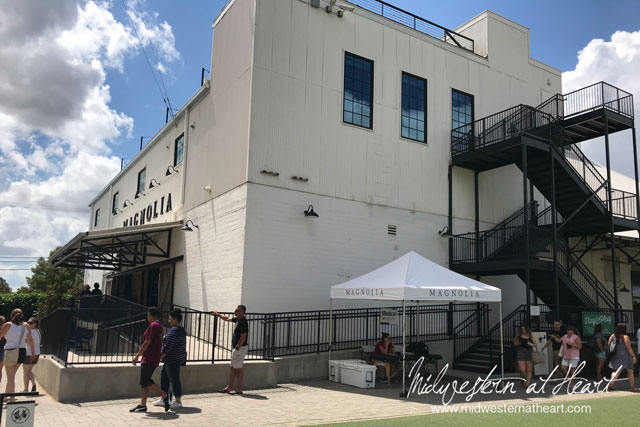 I’m glad we went. Joanna and Chip Gaines have stocked this place with some amazing things to decor a house. Truthfully, a lot of it was overpriced which made me sad. I found a coffee mug I wanted, but it was $24 and change. I just couldn’t bring myself to pay that. And the people… the people there were so stinking rude. I had one lady pushing a stroller about run over my foot. I watched her and moved my foot (I had been standing there and I’m not invisible). Then she looked at me and in a snarky voice said, “Sorry.” Like I was in the wrong. 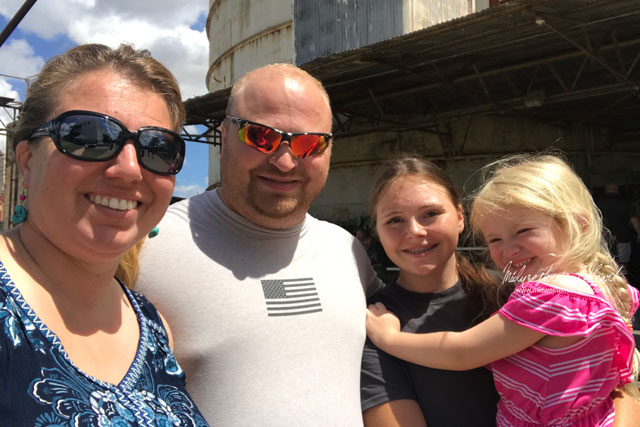 I spent a lot of time in Texas growing up. Really, to the point, I used to call myself part Texan. I’ve never seen so many rude people in one place in all my life. I was pretty put off, Truthfully. Someone pointed out that most of these people were tourists, but I saw a lot of Texas license plates all around the area. More of them than out of state plates.

Public service announcement… Just because you’re on vacation, please don’t be rude. I should get off my soapbox because I have my moments too. We all do. But gosh!

So all in all, I really loved the stuff in the Market and if I was a millionaire I’d probably decorate my house with it. Until then, I’ll window shop.

I told hubby we needed to go through the Silos Baking Company while we were there. There was a line, but we got through in about 15 minutes or less. Very efficient! He had to run to the truck and address some work issues, so the girls and I went through the bakery line.

When you get up there, they give you an ordering card. I wanted all of us to get something different, that way we could try multiple things. Well, Abug had to have what Tbug had so they both got a Classic Chocolate Chip Cookie. I wanted to get hubby the Silo Cookie but he HATES walnuts with a passion (and truthfully can’t really eat nuts anyway) so that was out. I wound up getting him the Peanut Butter Oatmeal cookie which happened to be Gluten Free. He laughed at me. And then I got a cupcake. Yes, I went generic getting a chocolate cupcake with vanilla icing. 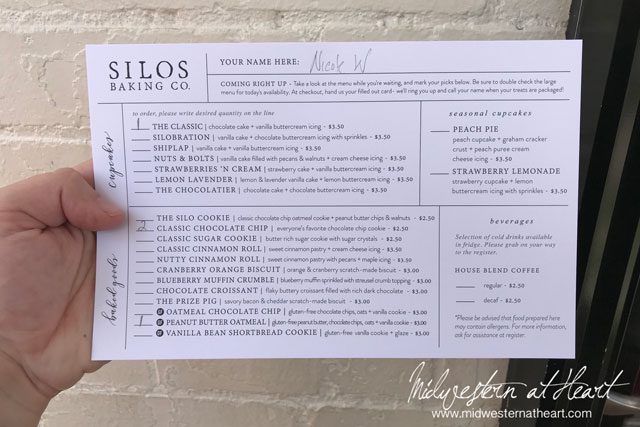 While in the bakery, I’m telling you, it’s efficient. You give them the card. They ring you up and you pay. One really awesome thing that the whole place did (including the market) was giving Military discounts. They salute the armed forces. Good for you guys! The employees were so nice, they made up for all the rude tourist people. Then after you pay, they call your name to pick up your order. We had our order in less than 5 minutes. And this place was totally hopping. 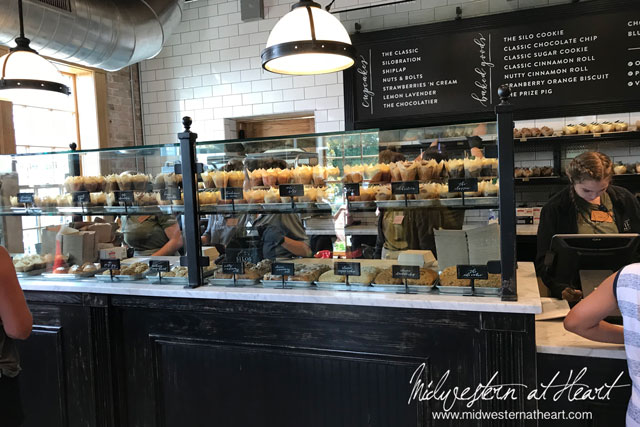 The Chocolate chip cookie was amazing. The Peanut Butter Oatmeal was good (I’m not a huge peanut butter fan but I soooooo had to try it!). And the cupcake was excellent. The icing was a bit sweet for me, but Yum! Truly, yum! You’d think I have a sweet tooth for all the cakes I do, but a real sweet icing kills my teeth. Oh trust me, I ate it… 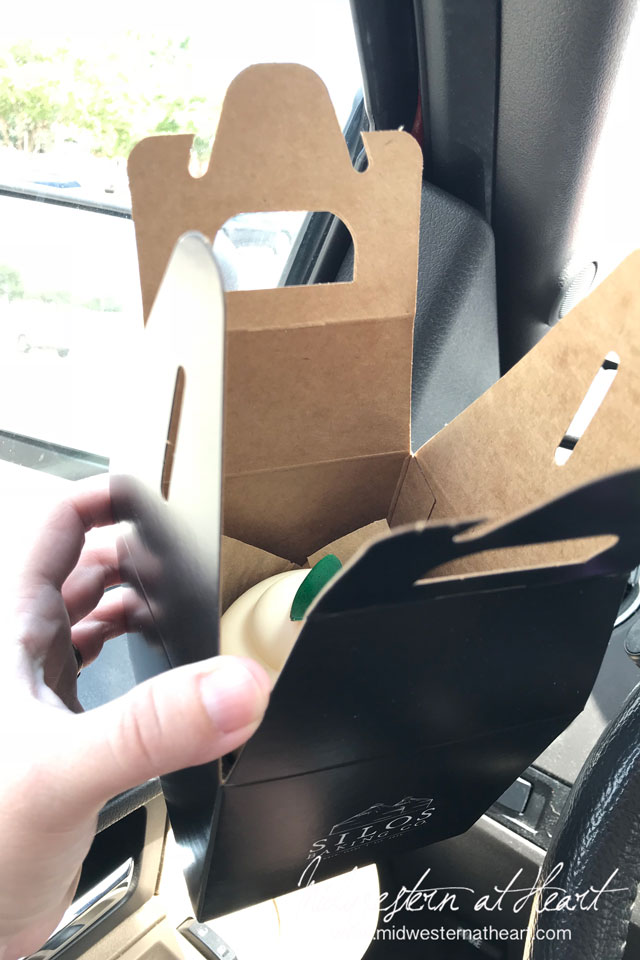 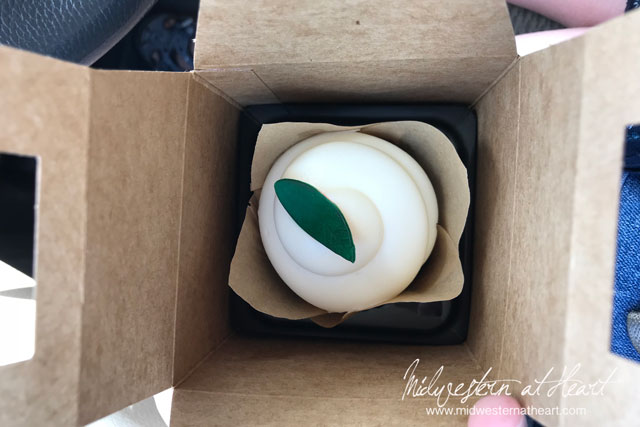 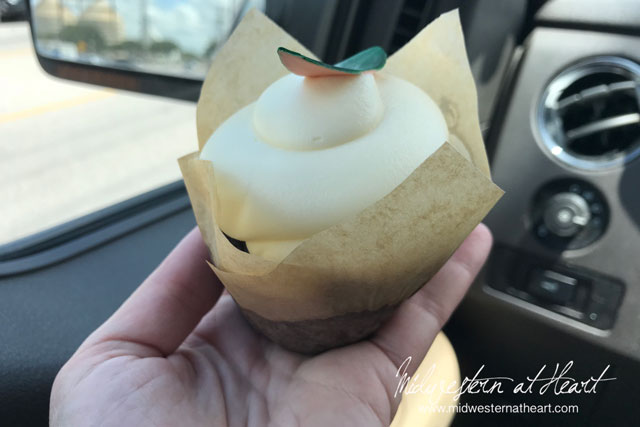 Because we skipped out on the hour and 45-minute wait at their restaurant, we started looking for a place to eat. I’ve always heard raving reviews of In-N-Out Burgers. There was one just a couple blocks away, so we decided to try it out. I mean, I’ve heard such great reviews that years ago at work, a guy who lived in California sent me an In-N-Out Burger shirt because he said it was that awesome. 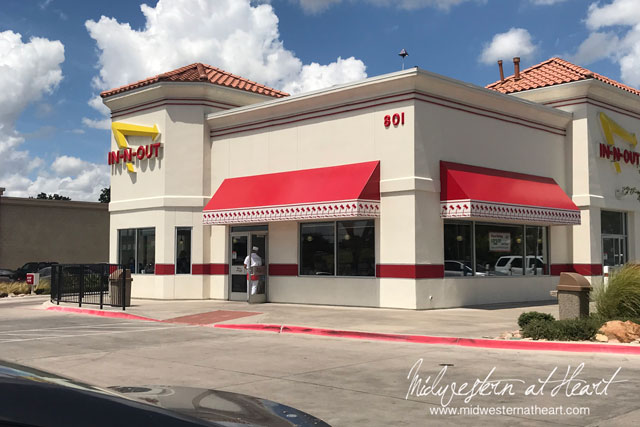 I have to say, I wasn’t totally impressed. Not like I should have been I guess. So you either pick a double burger, a cheeseburger, or a regular hamburger. You get fries and a drink (or shake). 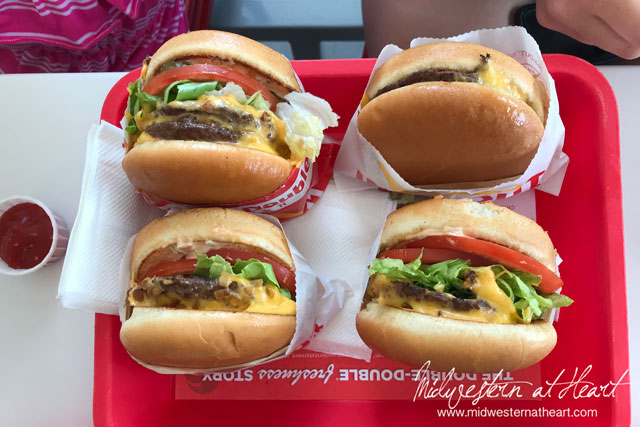 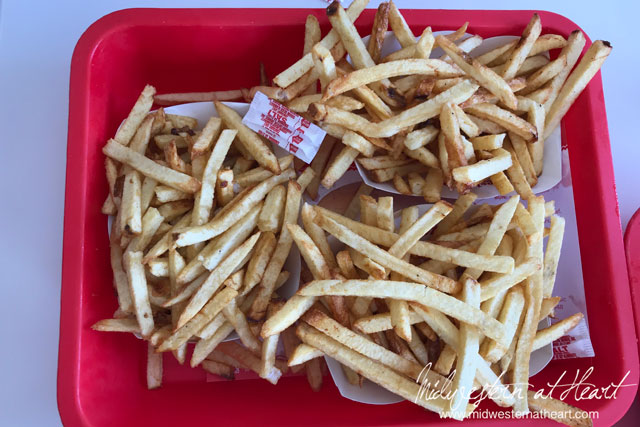 It was a good burger, don’t get me wrong, but it just wasn’t everything I expected because of all the hype. Sorry! I’m glad I tried it. Another one of those things I can cross of my MUST TRY list, but I guess I’m missing the hype or something. If that’s the case, someone please tell me why I missed it… are my taste buds just off? 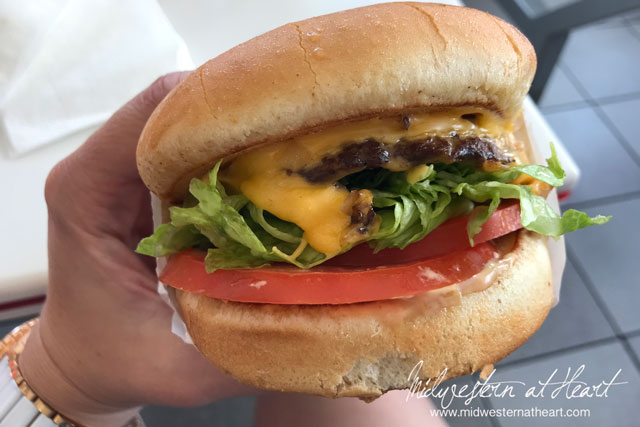