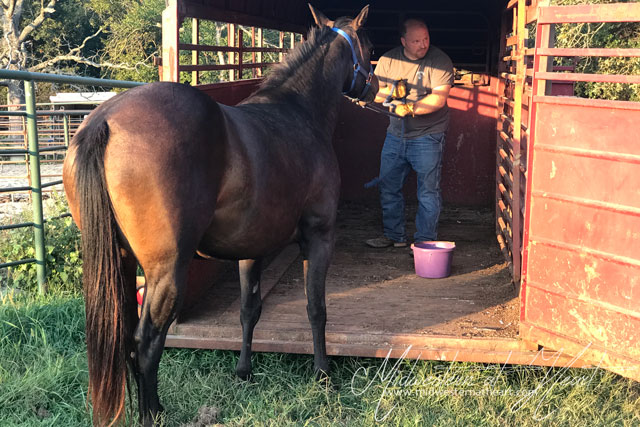 So what have we been up to around here? Good question. Life is never the same from day to day or even minute to minute. Last week we worked with trying to trailer break Little Pi. What on earth does that mean?

Well it means, we were spending time trying to get her in the trailer. Why? Well, because we finally found someone to break her to ride. Unfortunately she’s a little behind in the training aspect for Cutting horses. Sad but true and that’s our fault. Usually a colt is broke late  (I’m talking late fall) of their yearling year or the very first part of spring in their 2 year old year. Shortly after (no real given time frame) they start cutting training. A lot of colts are trained and shown for the first time their 3 year old year in what is known as a Futurity. There’s a huge one in Ft. Worth the end of November/First of December, otherwise a lot of associations have smaller futurities in the fall every year.

Well, Little Pi is a 3 year old and not even broke and here we are going in to fall. We missed those futurities. Sad day! The good thing though is we finally found someone to break her to ride. Nothing says we can’t get her broke to ride and trained late. I once showed a mare who wasn’t trained until she was a 5 year old and this mare and I won all over the country. It’s possible. If nothing else, if we sell her, she’ll be worth more money broke than she is as an unbroke mare. We’re not sure what is going to happen at this point, all we know is she’s getting broke to ride. Yey!

In other news… I read this blog post yesterday. I guess I haven’t paid enough attention to the news to know this was an issue, either that or I don’t live in Colorado Springs so I hadn’t heard. I don’t know. It was quickly followed up by this second post. This just goes to show you that people do and will believe anything and everything on the internet.

And on that note… I actually wrote a blog post the other day about cleaning wetsuits. If you didn’t know… They claim there are 2 types of divers. Those who admit to peeing in their wetsuit and those who say they don’t, but really do. Just a thought to ponder.

Finally… It started looking like Fall was approaching… but now I’m not so sure. This week the temperatures have been in the 90’s. That’s kind of funny really. I’ve looked at the forecast for the upcoming weeks. It looks like it will eventually cool off. I’m not a huge fan of cooler weather. I hurt in the winter.I don’t know why. I think I’m getting old.

So that’s life with me, how are you?

One thought on “Life Lately”