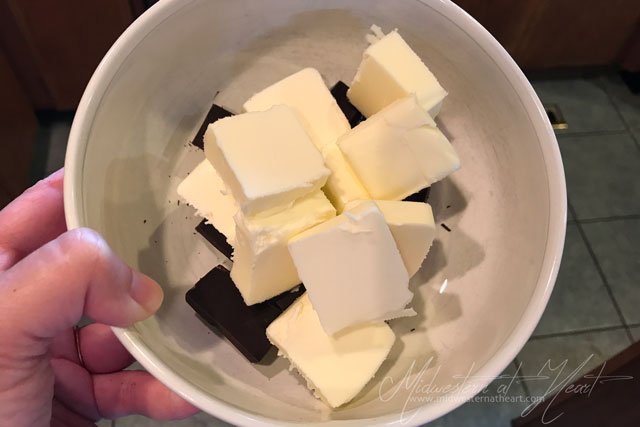 I’m really hoping that one thing I will gain from this Cupcake Challenge I put on myself is to learn to make the most perfect, most consistent cupcakes. So far…. It hasn’t happened, but I am getting closer…. maybe… 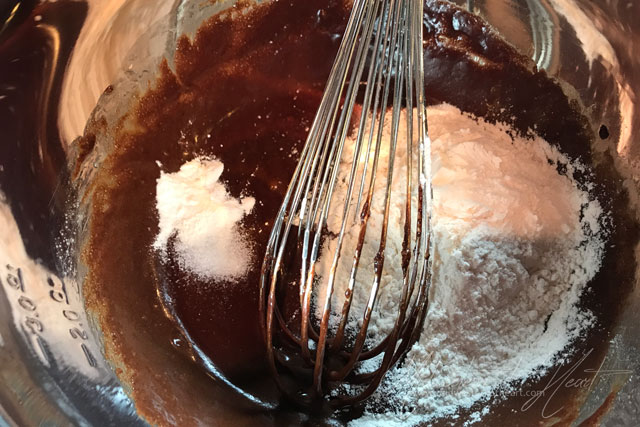 I truly think that out of all of these cupcakes, this is one that most everyone was looking forward to. I know I was kind of dreaming about them. And they definitely top the cake over last months. maybe top the cupcake? Would that be icing… like the icing on the cake. Okay, I’ll stop now! 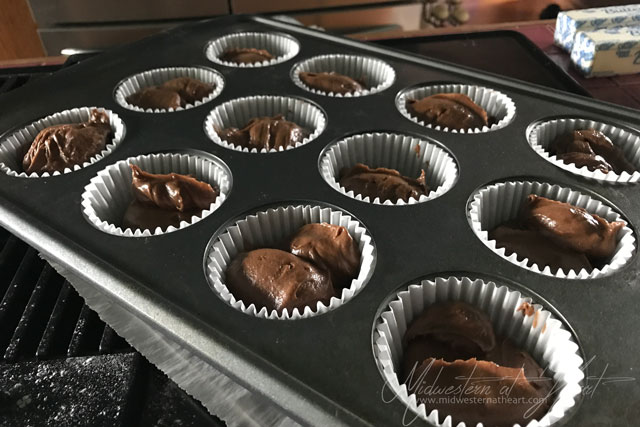 This month I started almost running out of time to get them made. I got there, but I think everyone who knows about the challenge to myself started to wonder. I baked the cupcakes last Thursday. I already had the oven on, I was making cupcakes and cookies for my baby girl’s birthday party (only 2 things she asked for… only 2, no toys, no food, just cupcakes/cake and cookies) Anyway I figured since I already had the oven on, I’d just dual purpose it and bake these while I was at it. 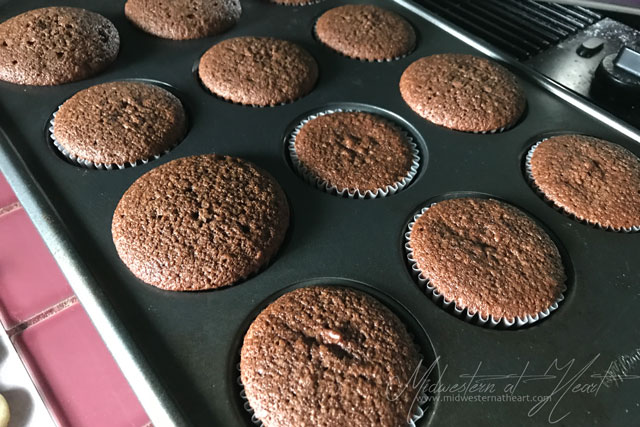 I have to say this is the most consistent my cupcakes have looked so far. Still not there, but by golly I’m sure trying. Maybe after 6 more I’ll be a pro? That is 6 more cupcakes at 12 cupcakes per batch. Math I don’t want to do in my head because I know I’ll screw it up. Where’s the paper and pencil so I can verify myself :). I don’t need a calculator… just good old paper and pencil. And just think, I used to be able to do square roots, even imperfect square roots in my head. Oy! The things you lose when you don’t practice all the time. 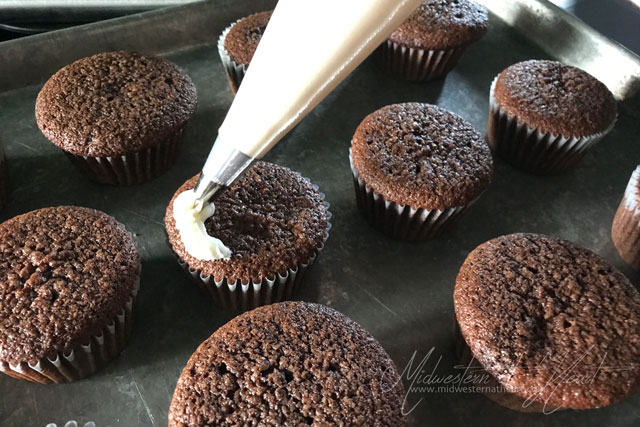 The icing was a bit sweet, but after you covered it in the chocolate, it toned it down just a bit. It really was sweet enough that my teeth were screaming at me when I tried it. Hubby’s not a huge fan of sweet icing, I think it might have been a bit much for him too. Deb said that 1 cupcake was about her max. I wonder if you cut down on the sweetness of the icing if it would have been better? I don’t know. I’m just trying to follow these directions to a T.

I say follow the directions to a T then I have to point out what I did. I intentionally left the nuts out because hubby doesn’t do so well with them. I also intentionally left out the sugar cones because I didn’t want to have to buy a huge box and have left overs for just the 2 the recipe called for. Then I got carried away with the batter, I tasted it and thought WOW this is excellent to the point I forgot to add the mashed banana into the batter. 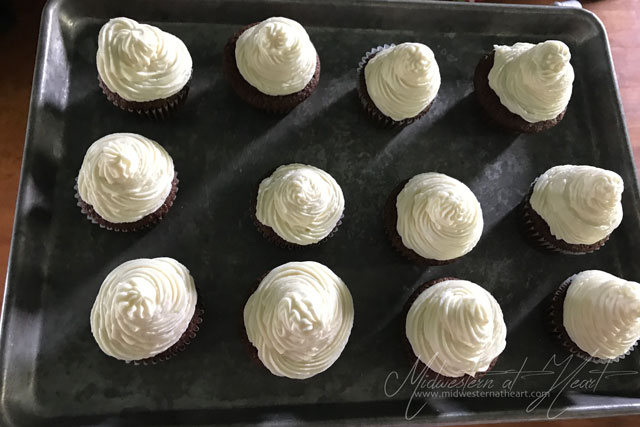 My only other set of notes on this is once you add the Coconut Oil to the Chocolate to cover the icing, it lowers the melting point of the chocolate. You put the cupcakes in the refrigerator 30 minutes to overnight to let the chocolate harden. When I pulled them out, we had to drive to the lake which is like an hour and a half or something. By the time we got there (and it’s June, but a milder June), the chocolate on the icing had started to melt. So we ate cupcakes for breakfast, otherwise they wouldn’t have lasted.

Hubby’s only complaint was he would have left the sprinkles off because he doesn’t like Sprinkles. I have to say this was one of my favorite cupcake recipes so far, by far. Bring on the next 6 months! 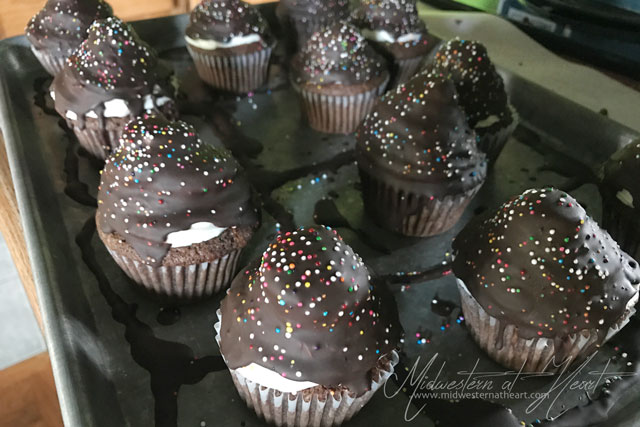 For the chocolate shell:

1. Make the cupcakes: Preheat the oven to 350 degrees F. Line a 12-cup muffin pan with liners. Combine the butter and unsweetened chocolate in a large microwave-safe bowl; microwave in 30-second intervals, stirring, until melted and smooth. Let cool slightly, then whisk in the granulated sugar and eggs until smooth. Add the flour, baking powder, baking soda and salt; whisk until just combined. Add the milk and whisk until smooth, then stir in the banana and peanuts.

2. Divide the batter among the prepared muffin cups, filling each about three-quarters of the way. Bake until the tops of the cupcakes spring back when gently pressed, about 20 minutes. Let cool 5 minutes in the pan, then transfer to a rack to cool completely.

3. Meanwhile, make the frosting: Beat the butter, confectioners¿ sugar and salt in a large bowl with a mixer on medium speed until combined. Add the vanilla and milk; increase the speed to medium high and beat until light and fluffy, about 3 minutes. Add the crushed sugar cones and beat 1 more minute. Transfer to a piping bag fitted with a large star tip. Arrange the cupcakes on a baking sheet; pipe tall swirls of frosting onto the cupcakes. Refrigerate until the frosting is firm, about 20 minutes.

4. Meanwhile, make the chocolate shell: Combine the semisweet chocolate and coconut oil in a microwave-safe bowl; microwave in 30-second intervals, stirring, until melted and smooth. Let cool slightly, then pour into a short wide drinking glass for dunking the cupcakes. One at a time, turn each cupcake upside down and dunk the frosting in the melted chocolate; rotate to coat and let the excess drip off. Return to the baking sheet and decorate with sprinkles while the chocolate is still wet. Refrigerate until set, at least 30 minutes or overnight.