When someone asks, Do you like sports?  I kind of have an odd answer to that.  Sure I like sports if I’m right there watching, but I can’t stand to watch it on TV.  I think at home on tv there are too many distractions, but if you are there and in the game, yup, I’m all over that!

Tbug saying she’d never been to a game before was a little lost so I explained the general rules when it came to baseball.  You know, an overview 🙂

Normally she wears glasses, but every time I’ve been to a game we’ve been stuck in the sun until the game is almost over so we let her wear her sunglasses in instead.  Plus we made sure she had on sunscreen, just in case.  Well this time we lucked out and we were in the shade the whole time. 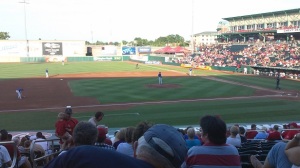 I really think they swapped out between 3 pitchers.  One was better than the others, but shhh don’t tell them I said that :). 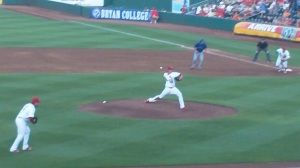 I wish I’d have taken my big camera, but the battery was dying on it, so I was going to take my point and shoot and same thing.  Gah, you think I’d charge batteries every once in a while!  So I took my new toy, which is only 5megapixels but it still worked.  Although the zoom isn’t everything I’d hope for… 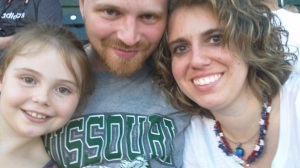 Here the Springfield Cardinal (right) was having a dance off between the kids (left. 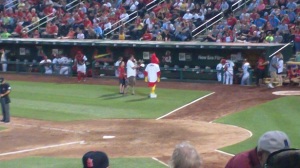 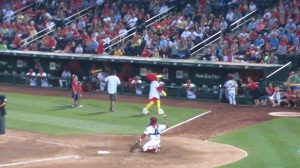 Here is their crest.  Very similar to the St. Louis Cardinals.  That’s why a lot of fans wear their St. Louis gear. 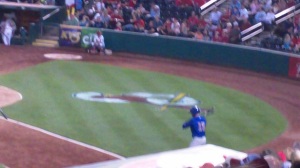 It’s hard to see but the ball that was just pitched was going 89mph.  Dang!  Some of them were down in the 70’s but one of the pitchers actually was pretty consistently pitching in the 90 range.

They wound up winning the game.  The Drillers didn’t score until the 5th inning.  I think if I remember right the final score was 7-5, but I may be wrong there…. 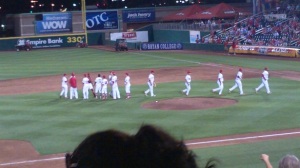 At the end of every Friday night game for the rest of the season AM Pyro sponsors a fireworks display.  It was pretty wicked!!!

My camera so doesn’t do it justice! 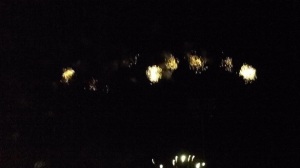 Hello Yum!
Kansas City: Where We Stayed, Where We Ate, What We Did
Blogging on a Monday
September 4, 1954