No, I didn’t go to Afghanistan, however my sweet husband did.  This is his memories.  I just happened to be going through photos on our computer yesterday afternoon and saw these and asked if he’d mind sharing them.

For those of you who don’t know, this is my husband.  He was on a flight from Bagram Airbase to FOB Sharana on a C-130 (that’s a military plane).

This is the morning after they landed at Bagram looking out toward the mountains. 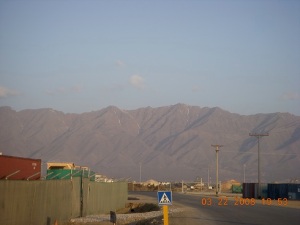 This is his buddy Tim.  He was stationed there at Bagram.

This is also in the C-130 headed from Bagram to Sharana. 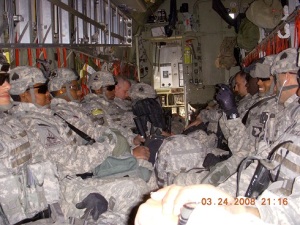 This was his new office before he took possession of it.

Day 1 they took a trip around the wire.  This is looking out off the side of the mountain they were on.

And yet another view.

This is on the FOB looking out on the backside of the airstrip looking at the living area.

And it’s a camel.  He said they were giving camel rides.

This is their office during the initial inspection.  That is why all the equipment is laying out, open.

This was his living quarters.

This was the other side of his living quarters.

This is out of the back of a Blackwater plane delivering supplies to remote FOB’s. 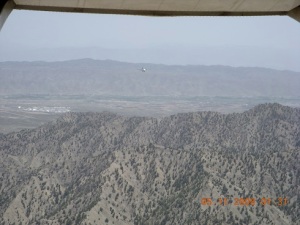 Look they have a plane following them.  He was delivering supplies too, not trying to shoot them down.

And yet another view. 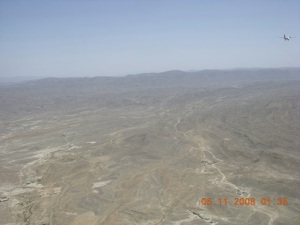 Can you even imagine what this landscape looks like?  He told me the sand over there they referred to as “moon dust” because it was so powdery fine.  On a side note I’m cutting apart some of his old uniforms to make him a quilt and I’m still finding sand from over there, and those have been washed and back in the states since 2009. 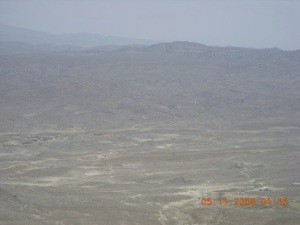 And yet another view.  If you look real hard kind of the middle left, you can see their plane shadow.

At this point he said he has his head hanging out the back of the airplane scared to death he was going to drop his camera.

Now this is Welch entering his room.  If you notice the green thing, that’s an old parachute that he put over the roof of his living quarters.  The white thing is a tube going to the AC to try and help cool his room.

This was a relax/play day of sorts.  Very low key.  They BBQ’ed, they sang, played BBall, Volleyball, just a day for them all to relax.

They were visited by many people including the St. Louis Rams Cheerleaders, Kid Rock, Toby Keith, Taylor Swift to name a few. 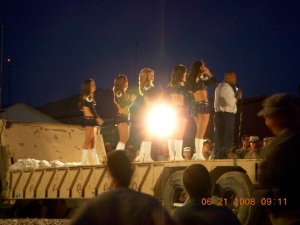 Boy doesn’t Welch look happy?  And a little like Will Smith too…. Just sayin… Although when I met him and I said that he looked at me and knew I’d been talking to my husband.  LOL. 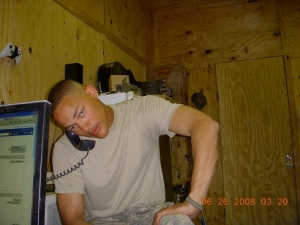 Swiffer Wet Jets were their friends.

If you need to smoke… they have an area designated for you. 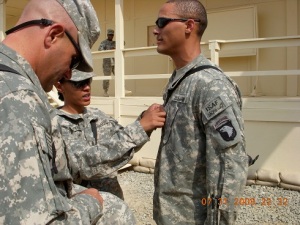 This is hubby’s desk and those were his guitars he used to pass the time. 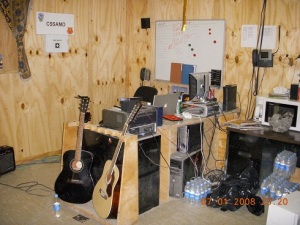 This was the C-130 that we rode from Bogram to Sharana.

And if boring wasn’t enough… see what he’s holding… it’s a magnet.  Apparently they would throw it at the ceiling.  And when they broke it, eh, they just taped it back together with medical tape.

Hubs being a “cool” guy hanging his feet out the back of the plane.  Don’t worry, he was strapped in.

And this time he had company.

That is a small compound inside of a FOB that he visited.

There’s the corner and the mountainous view.

This he believes was at Bagram.

And K36 was the KHut they lived in for a year.

So Thank you for sharing these memories with us.  I just find it so interesting to see other countries and sometimes can’t wrap my head around what it might have been like living there.