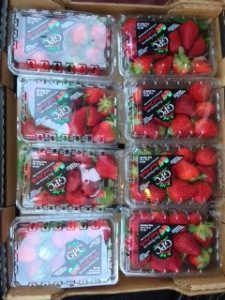 There will be Major picture overload, oddly enough, so please just excuse me while I break this up into multiple posts because otherwise, I’d really bombard you with photos. BTW, just a random about me, I like to call them P-hotos.. don’t know why even though I know it’s pronounced like fotos :).

So last week was the wonderful Spring Break. I’d like to say I feel relaxed but I woke up like a zombie this morning and didn’t want to get out of bed. I never heard hubby’s alarm go off even though I know I talked to him and then when mine went off I thought it was his. Yup, I was all shades of confused this lovely Monday morning!

Since we have this kiddo brewing away, I told hubby earlier this year that I wanted to try and get away even just for a couple of days as one last trip before baby comes. I’m quite nervous about how this will change our life, although he’s taking it all with a grain of salt. He’s cool like that and I’m the stresser of the family! We decided that since I got spring break, we’d just go then and chose to go to Kansas City. 2 hours away from home, lots to do but relaxing time too! Score!

I had a bit of a rough start getting to that relaxing point though… Since we were going to be gone for a couple of days I asked my parents if they’d be willing to watch our pooches for us. My mom said yes (and apparently didn’t tell my dad, another story for another day!) so when I got home from school on Thursday afternoon I loaded the pooches up in the pick-up and took them over to my parent’s house.

Since I’ve gone back to school I’ve quit carrying my purse (just throw what I need in my bag). I have my CC, money, driver’s license, etc all in a small wallet so it doesn’t take up much room in my bag. So I knew I took that with me to my parent’s house but when I got back that night I majorly flipped out because I couldn’t find it ANYWHERE. I searched the truck, my car, our house, and called hubby in a panic attack. I was about to jump back into the truck and go back to my parent’s house to see if oddly enough I lost it there when I opened the truck door and it was in the seat. I must have been sitting on it while I was digging through the truck. Major freak out session!

Okay moving on 🙂 I had a class on Friday and a doctor’s appointment and hubby had to work so we obviously got a late start heading out, but luckily it’s only about 2 1/2 hours to where our hotel was so we had lots of GORGEOUS daylight!! 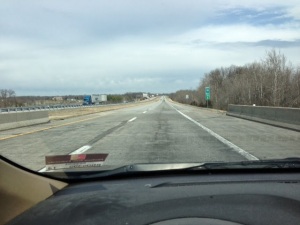 Saturday morning we woke up and went down for the breakfast the hotel offered. There was much more than what you can see on my plate. And I kind of feel like a pig after showing this.

We took our time getting up and getting ready. We had nowhere to be until Saturday nights dinner reservations. While we were trying to decide what to do for the day, I pulled up the weather and saw the potential for snow on Sunday. ha! Really?? 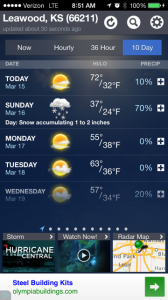 With that knowledge and the fact we were in my car, we decided to head to City Market on Saturday just to make sure we made it there. Holy cow was that place packed! 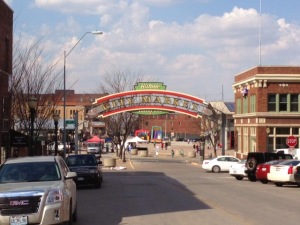 This is where the farmer’s market is located. We got this flat of Strawberries for $5. They were $1 a quart or $5 for a flat. Hello! YUM! We even went back and bought a flat for my grandma and my mom. I stood at the back of the building while hubby ran those out to the car. Such a cool sight!

We decided to eat Minsky’s Pizza there at City Market. I thought it was ironic that we ate there for the first time a year ago March 8th so it was like a reunion :). When we got there I asked if there was any flavored lemonade. I was told just regular so I decided to get Coke. Hubby got Coke as well. So the waiter came back and brought us lemonades, looked at us and said, dang I got that wrong. So he brought us back cokes. It was funny though because the rest of the day he asked if we wanted more lemonade :).

We ordered Papa Minsky’s. Pepperoni, Italian sausage, salami and roasted red peppers with our sweet Minskitoni sauce. Topped with mozzarella and Romano. Hello YUM! We got a medium. So… it was soo good that we ate every last piece :). Whoops :).

Once we were stuffed we took Dan & Grady’s suggestion and went to the Steamboat Arabia.

It was a paddle ship that ran the Missouri River back in the 1800s. In 1856 it was headed upriver and September 5th was hit by a tree and sank. The only casualty was a mule. All women, children, and few men were saved from the ship. In 1988, treasure hunters located it, dug it up, and instead of selling it off, decided to start a museum. There’s the long and short of it. If you’re ever in the area, it’s worth going to!

Some of the passenger’s possessions were dug up from the ship. 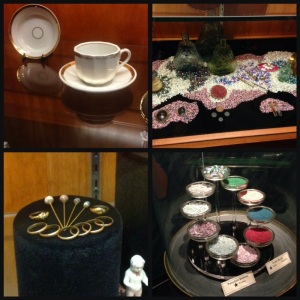 If you see where the pink arrow is pointing, there is a Man there (it’s part of the display not a real man). I was standing at the “back of the boat” and that man is where the front of the boat would be so you get a feel for the length of the actual boat. 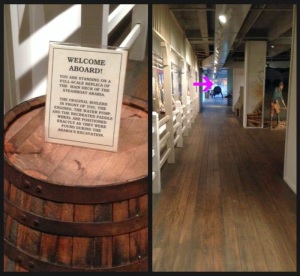 This is the actual anchor from the ship.

Around 3 pm we left there and went back to grab the 2 extra flats of strawberries (grandma & mom’s). Isn’t it cool, us, the farmers market, the skyline? GREAT!!! 🙂

Then I saw a store off to the side of the City Market that was like a lawn and garden store so I told hubby let’s go check it out :). We knocked this hat off the rack so I told hubby he could get one of these and look like my mom, then I put it on my head and snapped a picture :). 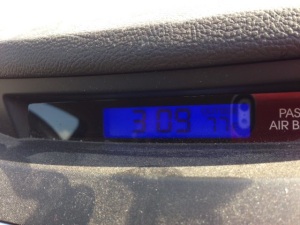 There’s more to the day but I’d say that’s enough pictures for one day, right?

10 Things to Smile About, February Edition
Ads and the Weekend
Pecan Pie Cake
So You Think You Can Sleep