Ok I had to go a while and get away from the wedding.  But I’m back.  Although it won’t be hardcore either.   (aka The professional pictures have started appearing magically! haha).  All the pictures in this post are actually taken by PC’s dad but I was just saving them for this point.

I’ll start with the guys first.  Man the whole time I was at the hair studio and then in the room waiting, I so wondered what the guys were up to.  I also thought having 2 photographers, better yet one male and one female, that I’d get some photos of the guys.  Mindy stayed with the girls and I’m not sure where Taylor was (I was in a room far off) so luckily PC’s dad jumped in and got photos of the guys getting ready for me.

One of the surprises I didn’t and couldn’t tell you about (b/c PC reads my blog religiously) was that I had 3 cards.  I had bought them years ago.  They each had meaning but at the time I bought them, I wasn’t even dating anyone, I just felt the need to buy them, so I did.  I put them in a box and put them away.  A couple weeks before the wedding it finally dawned on me why I bought these cards and what I needed to do with them.  I signed each one and labeled them with times.  One was to be delivered to him at 8am, one at 9am and the third which also contained a personal letter from me was to be delivered at 10am.  I gave them to my mom and put her in charge.  I didn’t care who took them to him as long as he received them in the particular order I sent them and that he opened them right then and there and read them.  Here he is reading one of his cards. 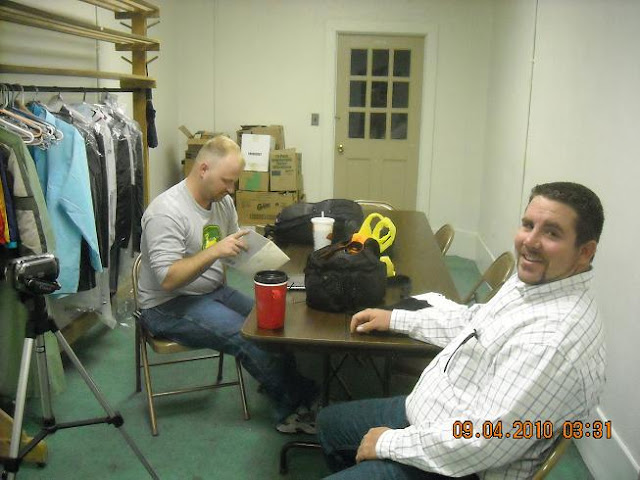 I’m sure most of his morning was spent playing on the iPad.  That’s my baby!! 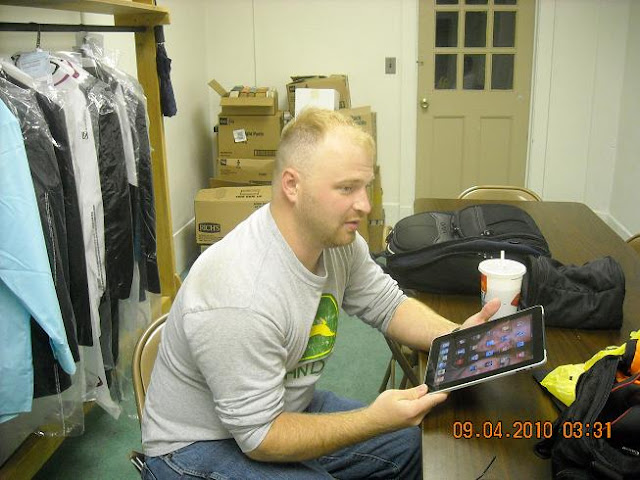 Eventually though it was time for them to start getting ready. They were in a room just off the sanctuary down in Fellowship Hall. 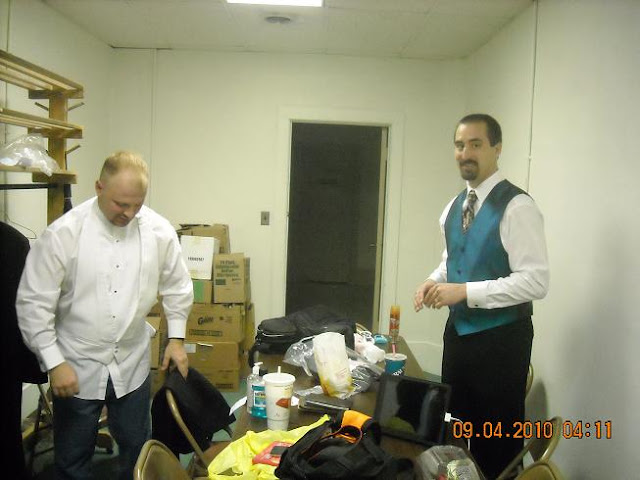 PC’s tux is different than Noah’s and Kalem’s. 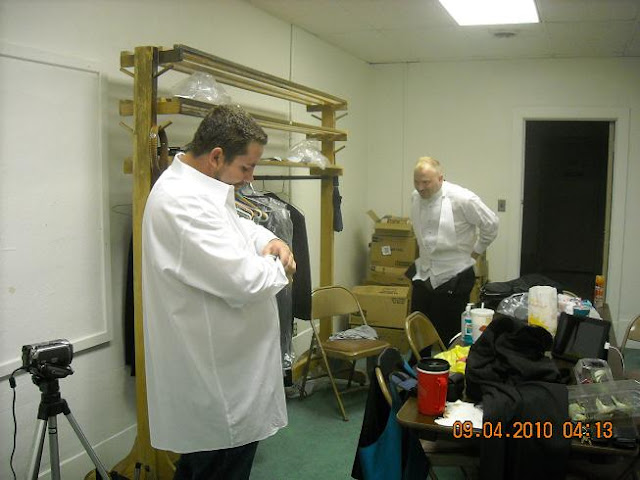 That would be my dad’s ornery hand. 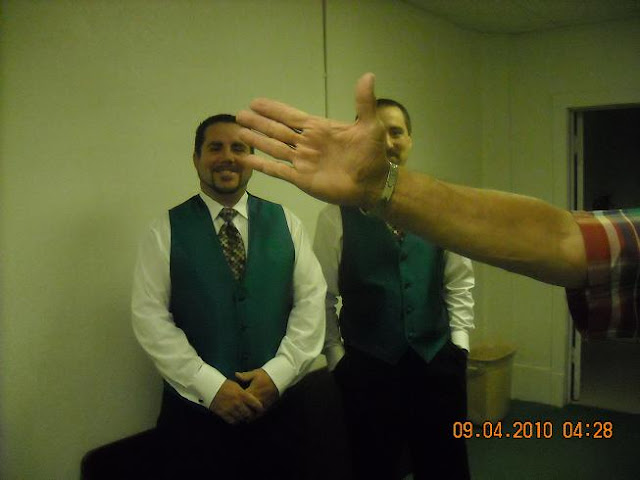 Our colors were Teal & Brown.  The tie’s which you can’t really see here I fell in love with are different shades of brown polka dots.  The vests of course are Teal. 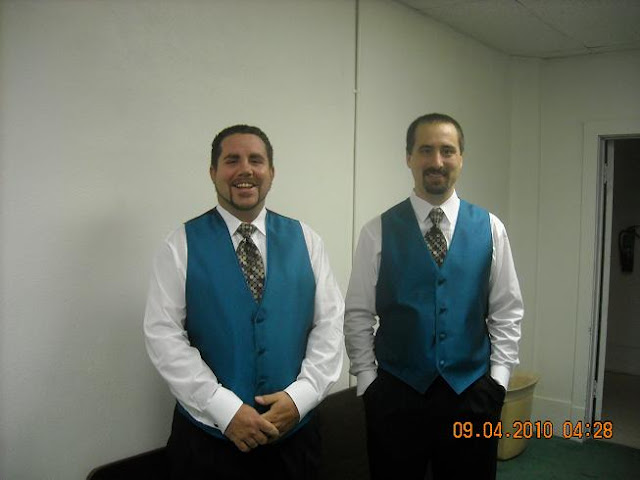 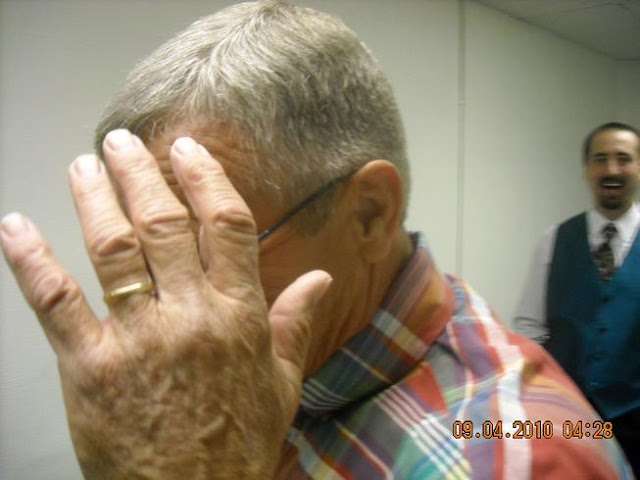 PC’s sister was the guest book attendant.  However instead of a guest book we had the signed photo mat.  The other lady in the photo would be Evelyn’s Mom. 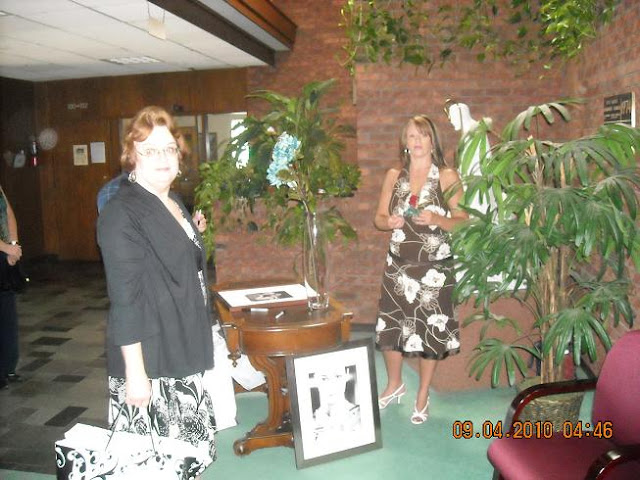 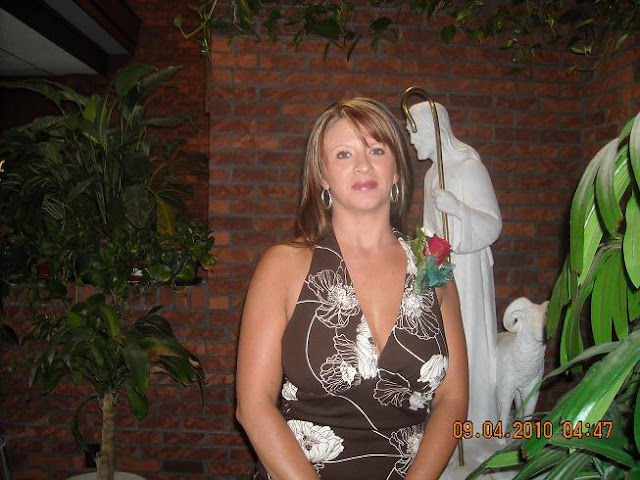 My AC was the gift attendant. 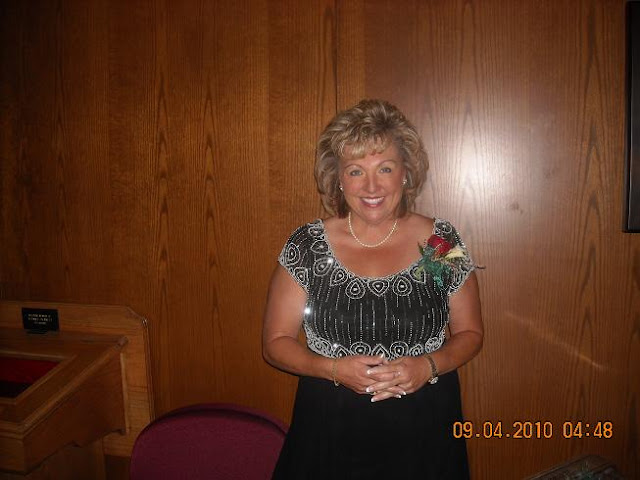 Here is PC with UB 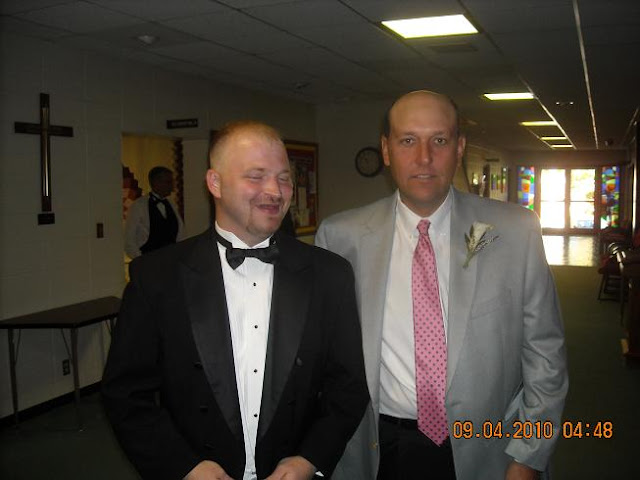 I believe that is my dad hiding around the corner.  And the guy looking at the camera would be his brother UJ 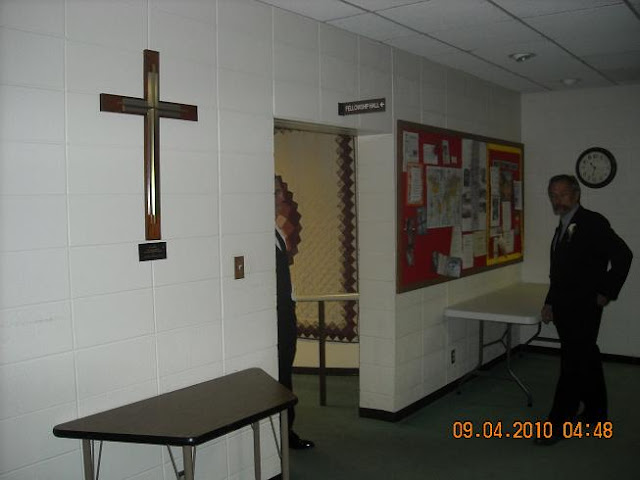 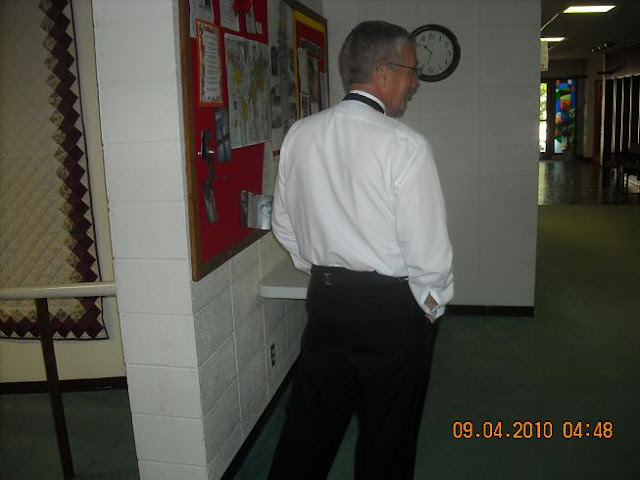 Since Tbug’s dress was semi-formal we decided instead of renting a tux for Dill Pickle, we would put him in a pair of black dress pants, a white shirt and a teal bowtie and then we let him wear his cowboy boots.  My only request is that they were cleaned up (no cow poop. haha) 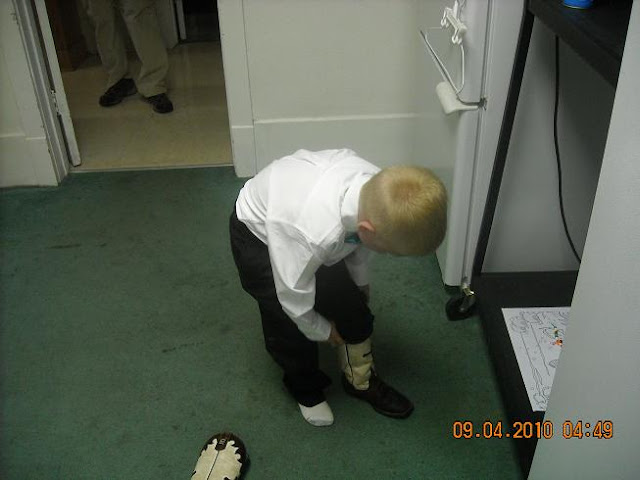 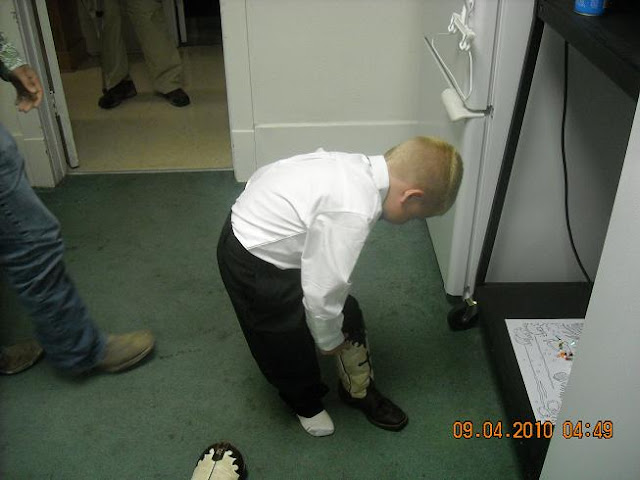 So he had to enlist the help of daddy. 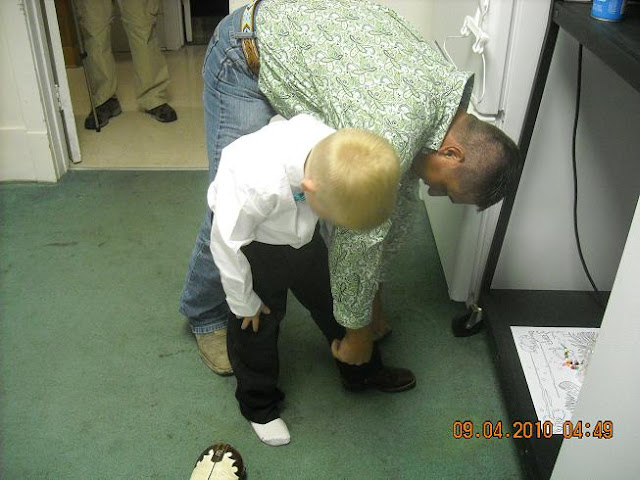 Boy I wish Kalem would have had sunglasses on too… wait what is Kalem looking at? 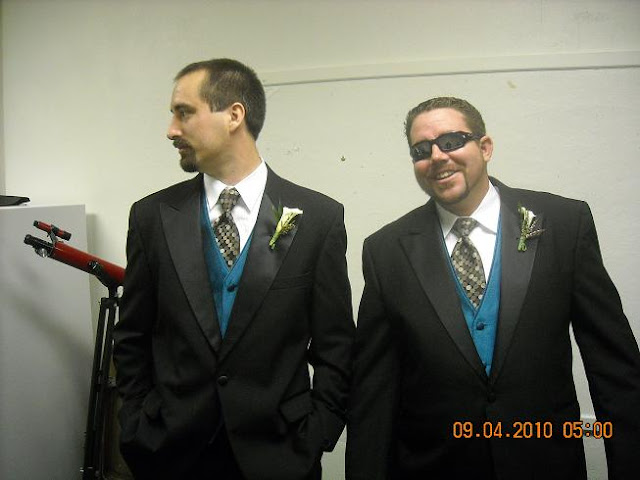 oh, PC, hmmmm wonder what PC said….  He has a ornery grin on his face. 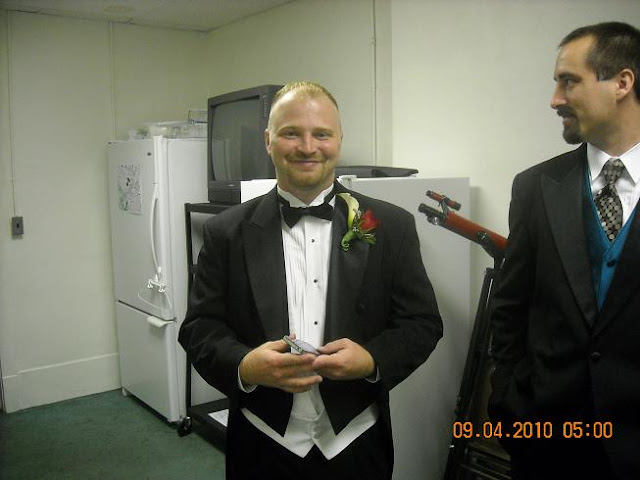 These are PC’s brother’s from another Mother.  Greg joined us all the way from Afghanistan.  He flew in and then he and Tim drove up from Kentucky. (Tim to the left, Greg to the right, yes they are twin brothers) 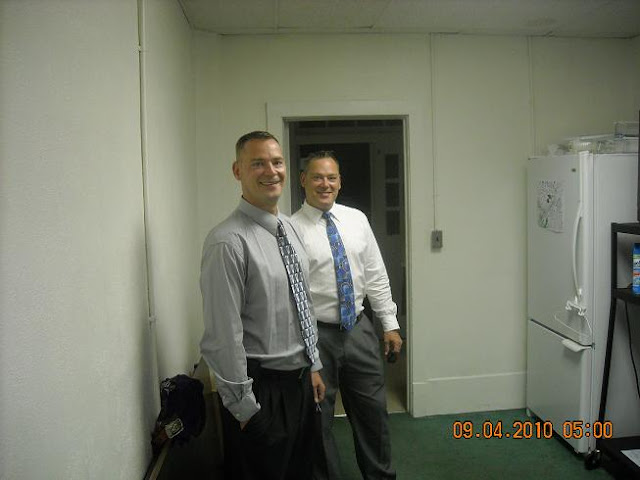 I figured this would be what PC was doing.  Pacing and talking 🙂 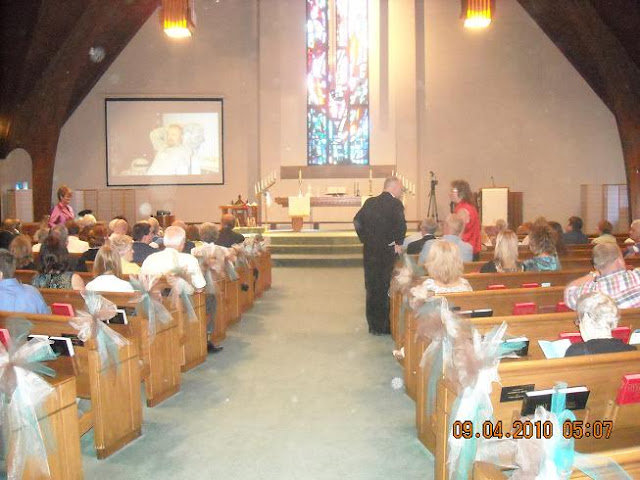 The night of Rehearsal Dill Pickle was being a turkey, here, he was being well behaved!  Yey! 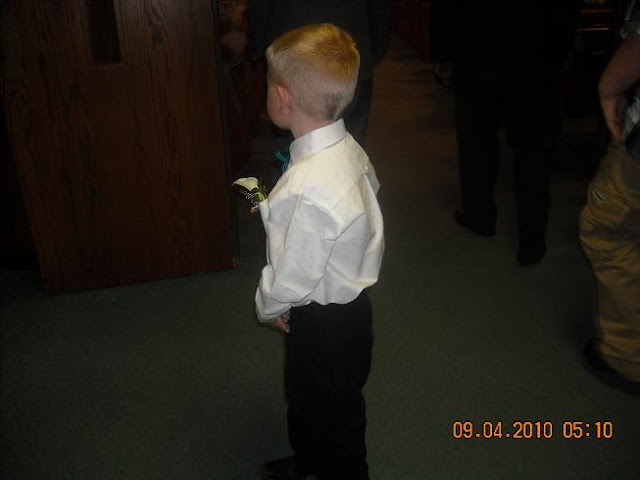 They are all patiently waiting for me to come… oh no wait they were waiting for the 11 o’clock hour to come. 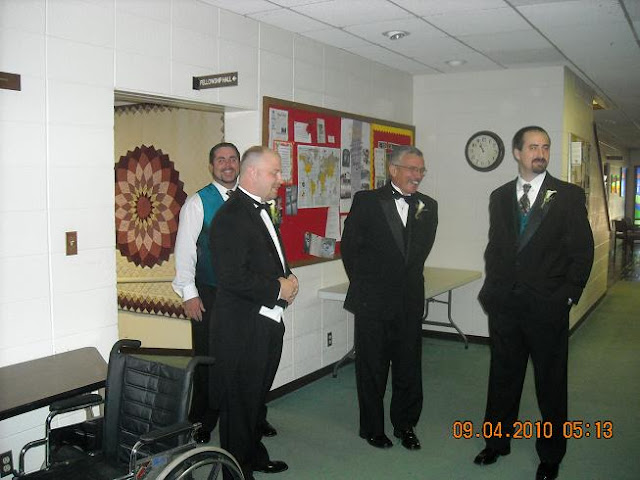 My guess is the preacher is asking if he’s sure he wants to go through with this… but I dunno, I was in the old Choir room complaining that I had to pee. (tmi but I went right before they put me in my dress and then I had the urge to go again.  Those dang nerves) 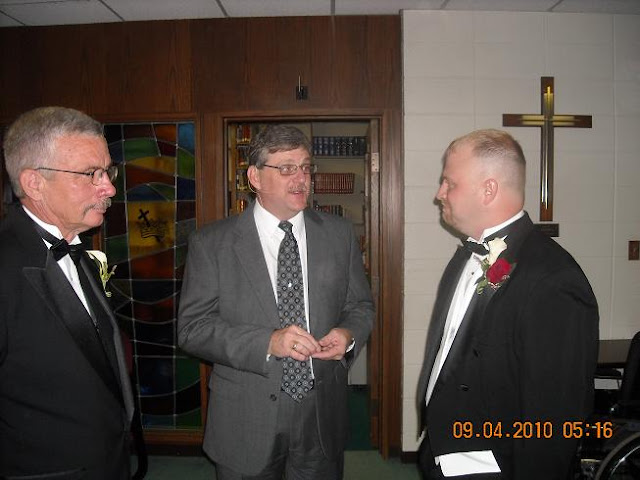 This is Momma Vicks as PC calls her. 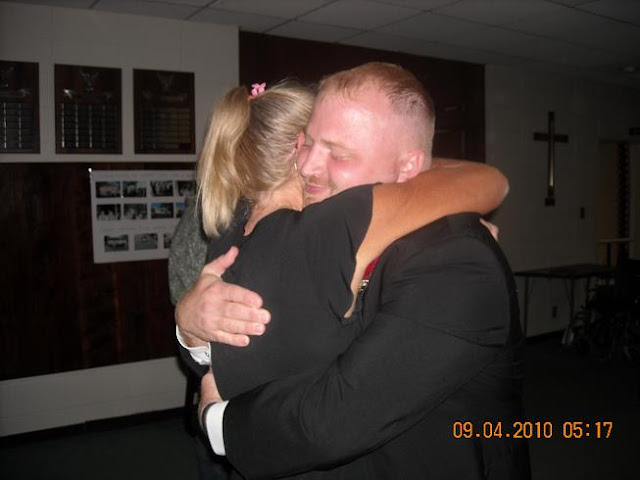 One of the people he WANTED there.  She’s basically like a second mother to him. 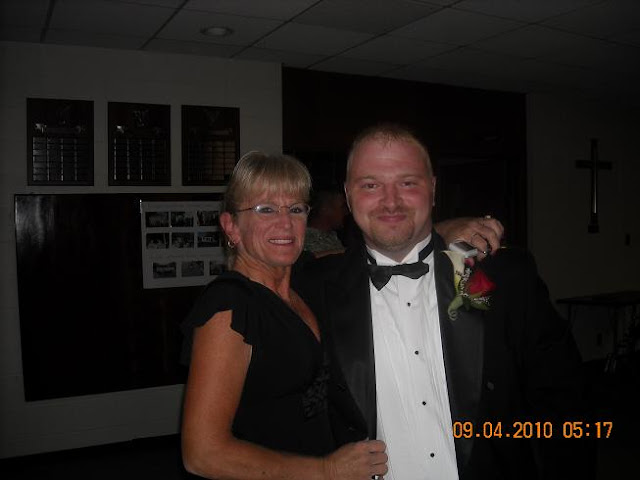 Peace, Love & I swear, guys have it easier 🙂
(P.S. don’t forget about my blog-a-versary surprise, you have 2 more days to enter!!)

Achoooooooo! Oy!
This song hits the nail on the head!
Easy Peasy Pancakes
A Story From My Childhood!!