I found a paper that I wrote fall of my senior year of college and I thought I’d share it with you.  The topic was “What makes Love last?”  We had to interview people who had been married for more than 30 years.

Love means different things to people nowadays than it did to people back in the 1920’s and 1930’s.  Both of my grandparents have been married for around 50 years so I couldn’t decide which grandparent to choose from so I interviewed both.  First, off I asked my grandma, Carolyn, what she believes that it takes for a marriage to work both when she got married and nowadays.  (Since my cousin just got married in September, I asked for advice.)  My great grandparents were married for 79 years.  They would have been married longer but my great grandpa died 10 days before his 108th birthday.  My great grandma wasn’t sure what it was like not to be married because she and my great grandpa lived in the house they were married in for all 79 years of their marriage.  The advice that my great grandma had instilled on my grandma was that husbands seldom change.  Wives just need to adapt to that fact and that is that.  Next, she said that if your spouse is argumentative, keep your mouth shut.  That way you can have the last word and he’ll never know what your thinking.  The last piece of advice she was able to give me is that if the wife makes more money than her husband, never brag and try not to let your husband find out.  It might hurt his ego.  My grandpa, Jack, said it just takes love and everything else falls into place.

My grandma, Virginia, “A wife can have no mind of her own, haha, no just kidding.”  She said, in all honesty, you need to have a sense of humor and patience.  My grandma Carolyn and my grandpa Jack have been married for 55 years and my grandma Virginia and grandpa Wilbur have been married for 50 years.  My grandpa, Wilbur, had a comment at first that shouldn’t be repeated.  It wasn’t bad just used a bad word.  Then I asked him seriously and this is what he told me, “It’s easier to compromise than to fight your odds.”

As an added note I decided to ask my great uncle, Ray, and this is the response I got from him, “Do whatever Dorothy tells me to do, whenever she suggests I should do it.” 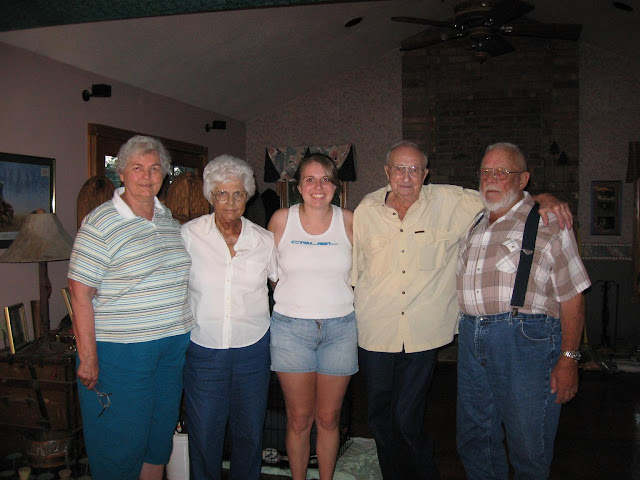 This is the last photo of one set of grandparents I have.  The 2 outside ones are married and the 2 middle ones are married.  This was on my birthday in 2007.
Peace, Love, and Happy Long Marriages
Nicole 🙂