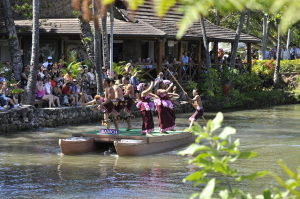 Then we headed to the Dole Plantation.

And while on our drive to the PCC we passed this huge rock.  It is the black rock right down there in the ocean.  It is 3 stories high, like being on the roof of a 3 story high building and people line up to jump off of it.  From the road, it doesn’t look very high but we were above it a ways.  The tour guide said that if you are down by it, it’s huge.

And Hawaii is working on wind power.  Currently, they are in the testing stages.

Once we got to the PCC we experienced the Pageant show at 2:30 where all the cultures represented at the pageant come down the river on canoes and do a chant.

Photos from the pageant:

I truly can’t remember what group we were at here but this was hilarious.  This guy here called up 3 different guys from the audience.

He came up with these three (in this order) San Diego, Japan & Kenya (he referred to them by where they’re from…)

So he goes on with his skit of teaching them how to chant and play drums like the culture we were at would.  Now back behind them were 3 back up drummers

and I swear they must coach these guys when they go back there to pick on this lead dude b/c it was hilarious!

San Diego goes first and the leader says, ok I’ll do it first then you repeat me.  Well before the leader could get through SD starts in pounding on the drums or chanting and not making any sense.  Finally, he makes him go sit down.
Then Kenya gets up there and they’re banging away on the drums chanting and all of the sudden Kenya breaks out into “Who Let the Dogs Out” and the look on the leader’s face was priceless!  Then they tried to do the dun dun du dun dun…. Du du… and Kenya would just repeat instead of the du du.
So he sits down and Japan gets up and he tries to have Japan yell as a man and Japan screams like a girl.  The look on the leader’s face again was PRICELESS!  So then He has Japan ask the crowd, Are you Ready.  And then says, “ok say ‘Are you read in Japanese,'” so Japan says, “Are you Ready in Japanese.”  And the leader is like, “No say are you ready, In Japanese.”  So Japan goes, “Are you Ready IN Japanese.”

So after that, we went and caught the boat ride back to the front so we’d be to dinner at the right time.  You can call me lots of things, but don’t call me late for dinner 😉

Once we got to the Luau/dinner, they were introducing royalty & the pig…

Then they seated us 🙂

Toward the end of the meal, they asked for any couples who were celebrating their anniversaries to come up so hubby and I went.  There were 4 couples up there, all of us were on our 1 year except one and they were celebrating 5 years.  Then we got to dance to a traditional Hawaiian Love song.

After dinner was over, then we milled around for a bit until the evenings show started.  My mom decided right here, she wasn’t sure if she would claim us anymore or not…

Once the show was over, we hopped back on the bus, drove the hour drive back to Waikiki beach, went into our hotel room and crashed.  It made for an extremely LONG day!  And Tuesday morning was the only morning on this trip I didn’t wake up at 3 am (which remember is 8 am MO time)

**Sorry this was so long and picture heavy, I was just trying not to have to break it down as much**

The Day I Got Chased by a Turkey
Hay Season 2016: And they're off
The Shack: Breakfast
Peaches and Cream Cupcakes