Do you know the snake story up to this point? If not, go read the post… I’ll wait. Okay, now you’re up to date, let’s move on.

So, I was beginning to think people thought I was crazy (hush) because no one else had seen this snake. It was there though. So that evening after dad and hubby both got off work, we went to the hayfield and started raking/baling hay. It was 10pm by the time we got home. Hubby went out to see if the snake was moving. He wasn’t. So he decided to just leave him there.

Friday morning my Father in law came out to my house and thought he’d work on getting the snake out of my car. The snake had moved up into the dash of my car. He tried to freeze him out, he tried to blast him out (turned the heater on in June….), and then tried to smoke him out with hubby’s smoker for the bees. Finally got the darn thing to stir, so at least now another person finally saw the snake. He tried to pin the snake between the floor and my house broom until the handle on my house broom broke and the snake scurried back up into the dash. After an hour or so he decided to just give up.

I went to the hayfield Friday afternoon to bale hay for dad. By the time we got home that night, it was 10pm again. Hubby went out and took a stab at getting that snake out of my car. He shined a flashlight in all windows seeing if that snake had moved. He saw nothing. Jared told us to use mothballs to get it out. Apparently snakes don’t like mothballs.

Hubby decided to put the mothballs in the passenger side to shew the snake out of the drivers side. He opened up the passenger door and there the snake was in the floor board of the passenger side. He reached in and threw it out of the car. Then grabbed it with a pair of long handled hand shears my Father in law left at my house to cut its head off. Granted it is a black snake, but we didn’t want it back in my car.

The shears though were too dull to cut its head off so he had to find a box knife to cut its head off. I was standing just inside the door watching from a distance. Remember, I. DON’T. DO. SNAKES. Ugh, just the thought of all of this is giving me goose bumps again! ugh!

And now, the part I’ve been dreading… the picture of the snake… This sucker was in my car. 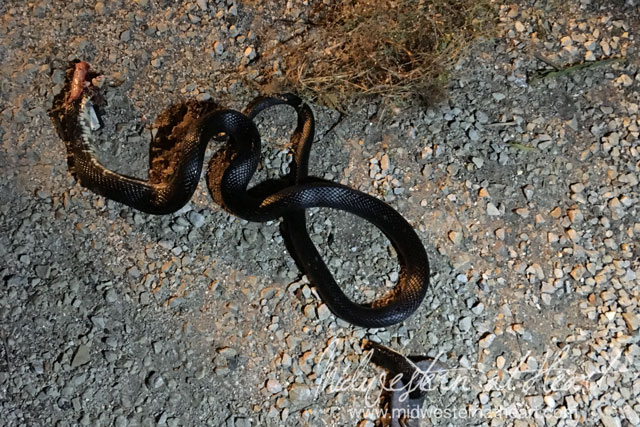