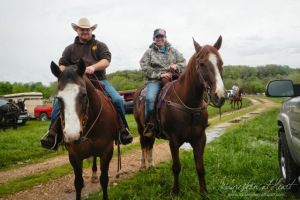 This weekend was a busy weekend. I was holding off on this post a bit for some numbers to add to it. Now that I have those let’s get started. (be warned this is a photo heavy post!) First thing Saturday morning. I’m talking FIRST. THING. My alarm went off at 5:30am and I was up before it. We were headed to Pineville, MO to Underwood’s Crag O’Lea for a Trails for Kid’s benefit ride.

And I promise, Devil Dawg is okay… she wanted a belly rub. I just tripped over her and she still laid like that so I took her picture. (The red is coming off trailer lights)

We planned on taking Blonde Barbie but she refused to load into the trailer. Not sure why so after trying for 30 minutes and starting to run late, we decided to leave her home. The crazy part was Aloha refused to load too and Aloha has NEVER refused to load?!?! Sorry about the poor quality but it was cloudy, 6:15ish and I lightened this photo so you could see her 🙂

Once we got the horses loaded I started loading stuff into the truck. Don’t you like how I was carrying 3 hats? I thought it worked 🙂

We finally hit the road about 6:45, just 15 minutes after we planned. As you can see the sun was coming up but the clouds were rolling through. The forecast was anywhere from 60%-100% chance of rain…

Once we got to Pineville, we no more than pulled in, and walked up to where a lot of the guard members were huddled around, they started pulling out the awnings to the campers because it was about to start pouring.

Hey, great use of tow hooks huh? LOVE it! And that is a Mule not a horse in case anyone questioned 🙂

Then, it poured and poured and poured. We’re talking flat out poured rain. We’re talking pouring water out of a boot pouring.We got there just before 8 and I’d say it started right around 8 and went through the 11 o’clock hour. It rained. Not that I’m complaining, I like rain, especially come July and August when it’s dry as a bone here… but it poured.

The dogs all got banned to campers so that they could hopefully keep muddy paws out of the campers later.

Even little boys got banned to campers 😉 (And Lee too….)

At 10 o’clock there was supposed to be a horse shoe tossing contest up in the main tent. When we got up there, we were the only ones up there and there was so much mud even under the tent. They said it poured the night before too.

The girls found a nice mud puddle to play in outside in the rain. Guess they weren’t taught to come in out of the rain? haha! nah it’s all good! definitely best to play in the rain while you can!

Sometime just after 11 it quite raining finally. Now the original game plan was supposed to be 2 different trails that were guided, one 4 hour and one 6 hour. Because of the rain and a potential storm to blow in around 2pm we just decided a big group of us to go out and get a ride in. We left camp just after 12 noon. And the rain we thought was over, started again. We had sunshine the last 30-45 minutes of our almost 3 hour ride. The rest of the time it rained so we rode in the rain. I guess we didn’t learn to come in out of the rain either :).

We made a wrong turn along the way so we got an even longer ride which was fun. Once we got back to camp some people swapped people/horses and went back out while others went back over to the camper area and hung around. Hubby and I were hungry so we went over to the cook shack, got some grub (like the terminology!) and went and ate. We got a ham sandwich, chips, cupcake and drink for $5. I didn’t that was too bad and that ham sandwich was GOOD!

Because of the 2 days of rain and all the walking through the area, the area between the campers was a total mud pit. I started out the day in my boots but quickly changed to my Muck Boots (mud boots) but before we went riding I switched back to regular boots. By that time after the ride, my boots and jeans were so muddy and wet I just stuck with them until later in the evening when I couldn’t wait for clean dry socks, clean jeans and I put my muck boots back on.

Because of all the mud, the dogs got to get out as long as someone took them out on the grass, otherwise they still hung out in the campers to try and keep muddy paws off furniture/beds.

Friday night there was a baked goods auction. Deb & Grady wound up with these “faux” chicken legs. They were either brownies or cake done up like you would for cake balls? Then there was toasted coconut on the outside and the “bone” was a marshmallow. I’m not sure what held the coconut to the cake/brownie though. They were good but boy were they rich!

At 4pm there was a duck race. You could buy 2 ducks for $5. Tony waded through the water and went and dumped the ducks up stream.

They caught the 1st place duck. Then… One mistake, the catchers forgot to weight down the net and ducks escaped! So we sent the kids all out into the water to catch ducks. That was almost more fun to watch than the actual duck race.

Maggie wanted to help too :). haha! She was having a ball in the water.

From there we went back to the campsite area. The item auction started at 6pm so we had a little time to kill. Shaye took Pete through the mud so she had to clean his paws off. Stephanie gave her hand wipes to use and Pete was hanging his head in what looked like shame. It was hilarious!

Finally around 6pm we all started to mosey up toward the big tent for the big auction. They auctioned off a few items and then started calling for hubby to come up to the stage. When he got up there they told him his duck won the duck race. His share of the pot was $322.00. We knew we had duck 26 but they said 326 won so we weren’t sure if we actually won or not until they validated it here. But that gave us $322.00 to put back in the auction to help raise money for the CP center. We came home with a new saddle pad and some liquor. Funny thing is we really don’t drink but we were running out of things to bid on so hubby paid for some and put them back in to be resold. You know, raise a few more dollars.

Obviously the sun was out enough for this. And look at Pokey’s poor shirt.

Chuck had his golf cart right in front of us. When he got up I sat down for a few minutes and this sign cracked me up.