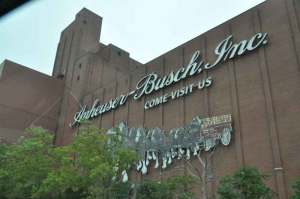 So Monday morning as we were checking out of the Hampton Inn, I accidentally dropped hubby’s camera.  Oh, I was not happy, if you can imagine.  Luckily I just broke the battery grip, so far as I can tell.  Still not happy about that though.

We had time to kill between hotels, so we decided to head to Anheuser-Busch and see what was happening there.

Ah, the sunglasses montage.  There’s something about me and my infatuation with sunglasses, I can’t explain it!

How cute are these cookies?  You can get your own Clydesdale, but don’t worry, you’re not eating horse, it’s a sugar cookie ;). haha.

We saw that they had a Beer school and it looked interesting so we decided to sign up and attend.  Now what’s funny is neither of us like beer, but still, thought it would be fun.  {by the way, it was fun}.  Beer School is about 45 minutes and is on a first-come, first-serve basis.  We got signed up and then it was time to wait.

While we waited for Beer School, we wandered around the Anheuser Busch museum.

Who remembers these commercials?  Spuds McKinzie

Once they called us for Beer School, we met up with the teacher and his assistant.  There were 3 of us on this particular round.  We learned that there are Ales & Lagers.  Lights and darks.  Also how Beer was made.

The key ingredients are Chocolate Malt, Rice, Hops {adds the bitter}, Pale Malt & Caramel Malt.  They passed all but the rice around for us to smell, because we all know what rice smells like, right :).

We came into a chart, 4 glasses, pretzels & a souvenir bottle opener.

Now I learned (I knew people did this because I worked in a restaurant but I learned why) why people put salt in their beer.  It is to keep releasing carbonation.  Now, the glasses here actually had etching in the bottom which helped with that to help keep from making your beer salty.  Also, they said it’s best to drink beer out of a glass because you also get a smell through your nose, so if you’re drinking out of a can, that’s why you get a bit of a metallic taste.  I don’t drink beer so I didn’t know this, but I also found it fascinating to learn :).  I must admit, I’m still definitely not crazy about beer, except in bread :).

As we were leaving beer school, our instructor gave us maps (we asked) of different local restaurants.  He said The Hill was the Italian Neighborhood and that’s where we wound up going to Favazza’s for lunch.

From there, we decided that we’d find our way to the Zoo.  We parked a few miles from the zoo actually and had a nice walk to the zoo.  On the way, we attempted to do an outfit post again.  This is definitely why I’m not a fashion blogger :).

Once we got to this small lake/pond piece of water, we sat down on a bench and had a nice long conversation just enjoying each other’s company.  It was great.  I’ll bet we sat there and people watched/animal watched/chatted for probably 30 minutes to an hour.  It was so peaceful.

Finally, we decided to head on to the Zoo.  Now one of the awesome things is the Zoo is free.

Follow the Yellow footsteps (or the yellow brick road as I kept chanting).  Hi, hubby’s rear :).  It had to make an appearance!

We stumbled across these dudes.  Sadly I’m not a zoo goer generally so I really can’t tell you what these guys are.

And my favorite, the Hippo.  Because I want a Hippopotamus for Christmas.

The elephants.  Did you know elephants eat bananas?  That’s what the gal was feeding them.

After that, it was time for us to get a snack.  We got Dip-n-dots.  Sadly those things are soooo expensive but sooooo good.  It’s ok for a treat every now and again, right?  Hubby went with the banana split and I got the Oreo.

Then we headed over to where the Seals & Sea Lions were.  It cracked me up because just the night before we were watching Shark Week on the Discovery Channel and learning about both of their habits and how they feed while being chased by Sharks.  It was pretty interesting.

They were having soooo much fun showing off for everyone.

From there we headed back to the car and headed to our new hotel to check-in and from there was dinner and a movie.  We went to see Grown Ups 2.  I seriously say don’t listen to the critics and watching, but that’s only if you like Adam Sandler and his types of movies!

How do you Spend Your Tuesdays??
I am Superman
Let's Revolt!
Thurday night Chiefs Game vs Denver Broncos