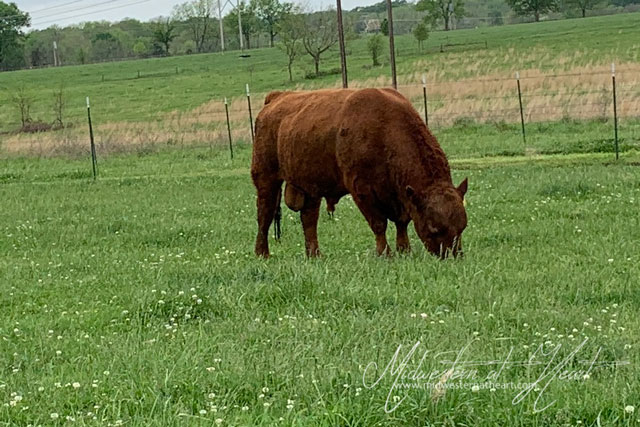 Next thing I knew, we were out of the Gert business and we had Long Horns. I don’t really know where they came from or anything. I was just a little kid. We didn’t have the Long Horns very long and we sold them too. By this time Danielle had gone on to greener pastures (aka she died) and so we were cowless. This happened about the time my parents sold their house (give or take a few years). My parents kept one Long Horn Steer named Laredo.

Jump forward a few years (I don’t really know how many) and we were back in the Santa Gertrudis business. And that’s what we’ve had ever since… until this year. First, it started with the 3 bottle calves… they are Jersey cross. But that was more for a fun project for the little (and me) to do.

Then we had a freak lightning storm blow through and the next day dad’s Gert bull was dead. Fairly certain he was struck by lightning looking at him and his surroundings.

So we were without a bull.

Next thing I knew, dad was on the hunt for a new bull. I have a friend that owns/shows Gelbvieh cattle. Dad wanted red and they are red. But then, we decided to look into the Red Angus instead.

To meet our new Bull. We drove down last week to the ranch he came from and took a tour. We made arrangements to buy him pending a vet check (to make sure he had good swimmers, after all, he is a bull)… Then we picked him up and now we have a bull. And get this… part of his registered name is Prince Charming. Awe.

How to: Onion
My top 3 worst traits
Black Friday
The Story of My Life in 250ish Words