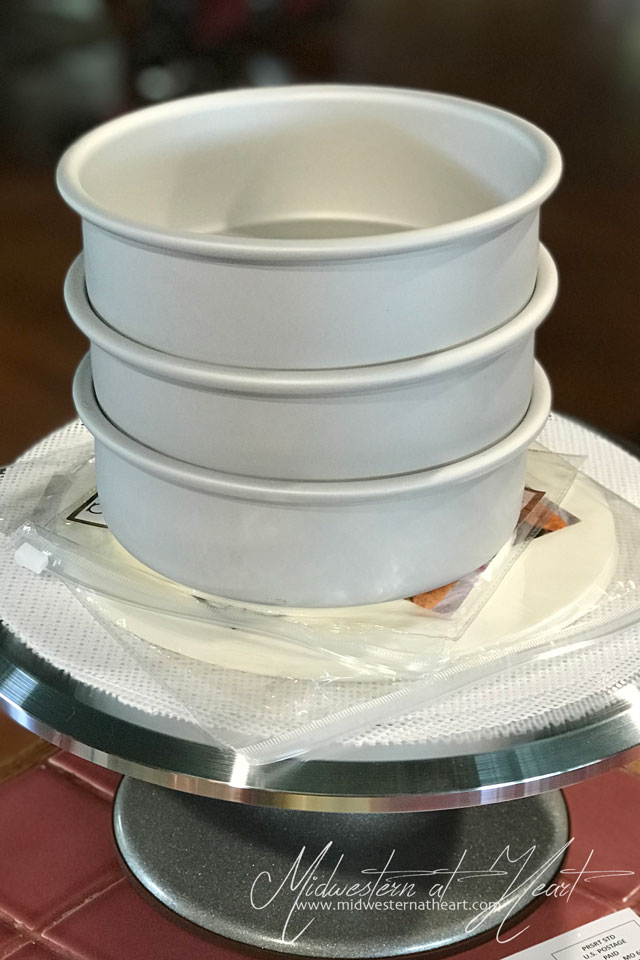 It seems like a lifetime ago, but I took cake decorating classes. They were the Wilton ones through Michael’s Craft Stores. And I loved them all at the same time they felt overwhelming. Almost to the point, I really didn’t do cakes for a long time. Every now and then, the special occasion I could be talked into it, but for the most part, I avoided it like the plague.

And then one day in May, I decided I was going to make birthday cakes to take to the lake for Memorial Day Weekend. Somehow, somewhere I got hooked on a blog called Liv for Cake. Her cakes really and truly impressed me. And that passion, that desire to decorate cakes just came back. Sure, I can buy icing in a jar (although I don’t) and a box cake mix and make a cake. But there was something about her website that drew me in. It was nuts!

I knew there would be a lot of kids at the lake, so I was afraid that they may not like the Chocolate Dulce de Leche, and that’s when I also found a funfetti cake recipe to try… but I was all the sudden hooked. Even with the few mishaps that happened.

And lately, my husband has been feeding this “addiction” for lack of better word. I upgrade my cake turntable to the above picture. I got some 6″ cake pans along with a few more 9″ and bam, I’m cooking up a storm, mistakes included.

Somewhere in all of my research on cakes, I came across a YouTube and blogger, Tatyana of Tatyana’s Everyday Food. She does those beautiful over the top cakes that just draw my attention. I kept wondering, when can I make one. Will I make one? Which one? So many questions. Then I saw her Ultimate Birthday Cake. Oh gosh… I wanted to make that sooooooooo bad.

Then I started thinking… you need to have a birthday cake on your birthday! Since Abug had her birthday party 2 weeks early and cupcakes at the lake, she really didn’t have a Cake for her Birthday. That’s when the idea was born, I’ll make this cake for her birthday! 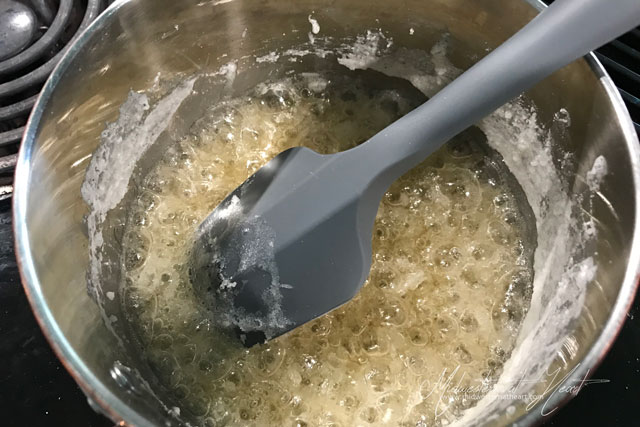 The first thing you do is take sugar and water to a golden color, then you add food coloring. Yeah… I guess I took it too far because when I added the food coloring it got chunky hard, not smooth. Ugh! I threw it away and questioned my sanity. 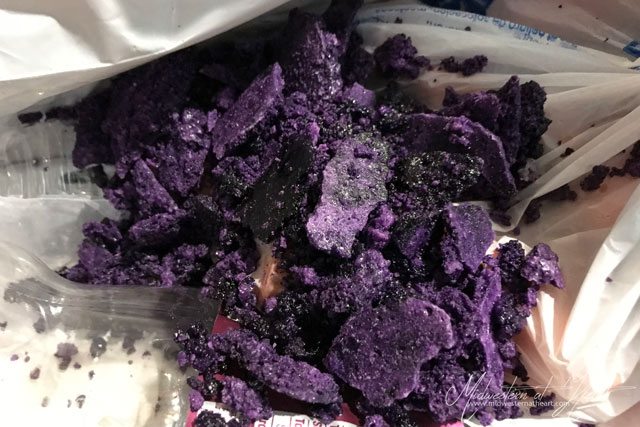 After a pouted for a few minutes, yes I really did… I decided to try again and really watch it. I may have underdone it this time but it still turned out okay. Especially after it sat in the refrigerator once I broke it apart and put it on the top of the cake. 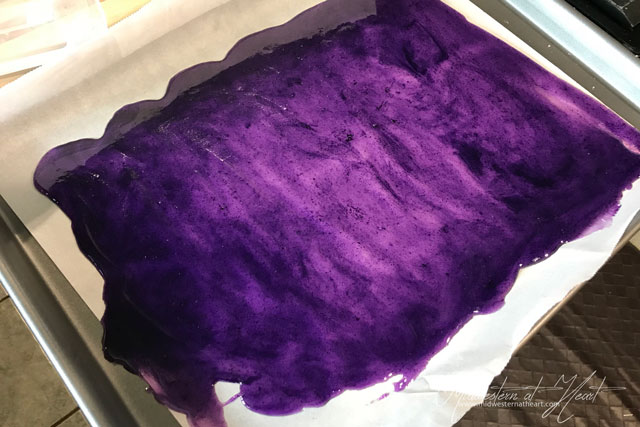 I debated quite a bit on if I used her cake which really called for the batter to be in 3 8″-pans. I really wanted to use my 6″-pans. I couldn’t decide if I use hers in my 6″, should I just use 2/3’s of the recipe. Decisions, decisions. In the end, I decided to just pour the batter in my 6″ cake pans. I baked it for about 25-28 minutes. My centers collapsed a little… like maybe a 1″ diameter. It was weird and only 2 of the 3 did that. The other one came out perfectly flat. 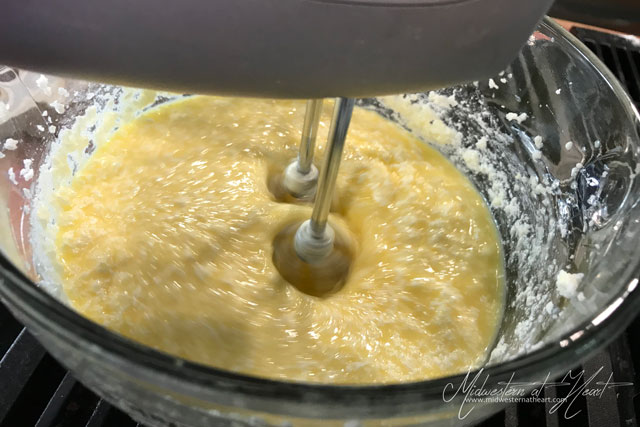 Everyone has their own tips on how to get those perfectly flat layers. One thing that Tatyana said was overmixing is what causes the gluten to start forming making that dome cake.

I also wasn’t sure I was sold on the fact that I used the hand mixer on the first part of the cake. I might have preferred my stand mixer. My batter never really looked like it got smooth. I had watched another video of a guy who made a Funfetti Cake in 6″ cake pans and he said that if it looked clumpy when you add the flour and whisk it that would help. I went with his advice and it worked.

Her buttercream in the recipe called for a regular American Buttercream. I’ve been wanting to try a French Buttercream for a while so I made the decision that now was as good of a time as any. 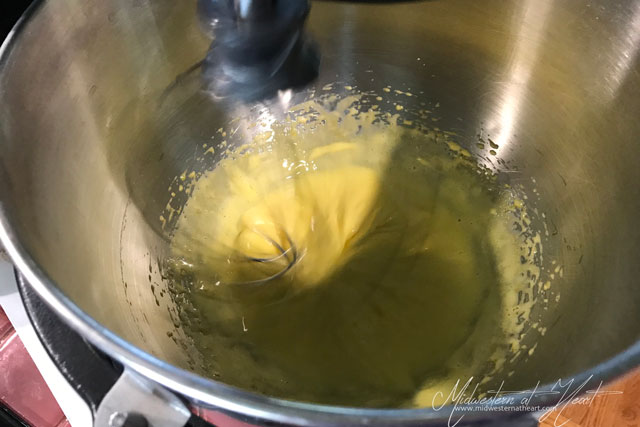 Have you ever made a French Buttercream? It starts with 5 egg yolks. You beat them until they are pale yellow. I wasn’t sure if they were pale enough, but I went with it.

Now if you are worried about eating raw eggs, you aren’t. When you add the sugar water that has been heated to 115˚C/238˚F, the sugar/water mixture cooks the eggs. If you’re still worried, go with pasteurized eggs and that should take away some of that “fear.” 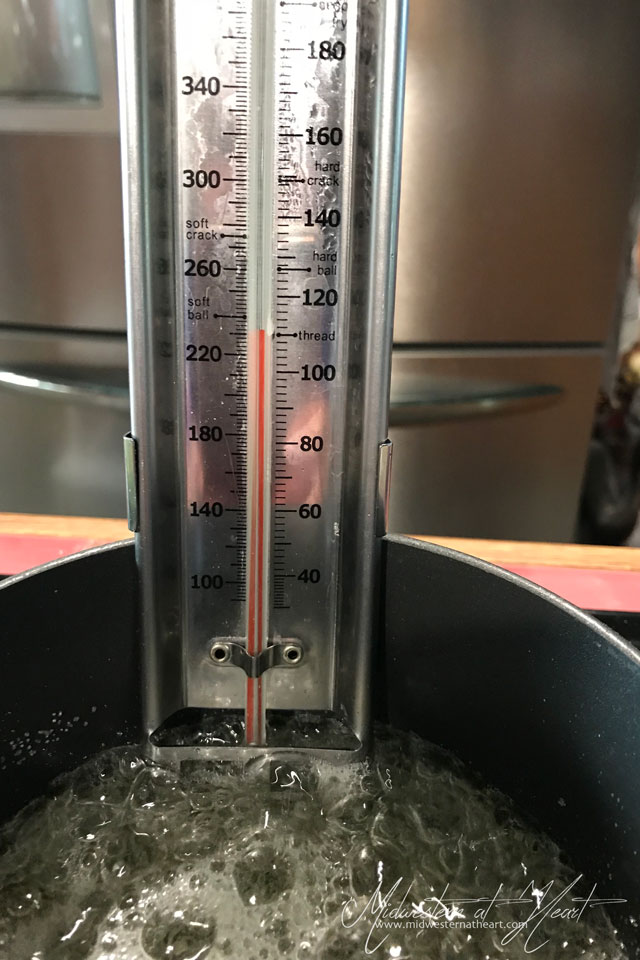 Then you beat it. Anyone else just hear the Michael Jackson song start playing in your head?

Anyway, then you add 16oz of butter a couple tablespoons at a time. This is what seems like it takes forever. Oh and the real kicker, I used Irish Butter in my French Buttercream. haha. We don’t have French butter around here… But I wanted to use a good quality butter. Now, just after I got my buttercream made, I found myself having to head to the hayfield to pick up the hubs. I threw the buttercream in the refrigerator so it could firm up a little bit and I could use it when I got back. 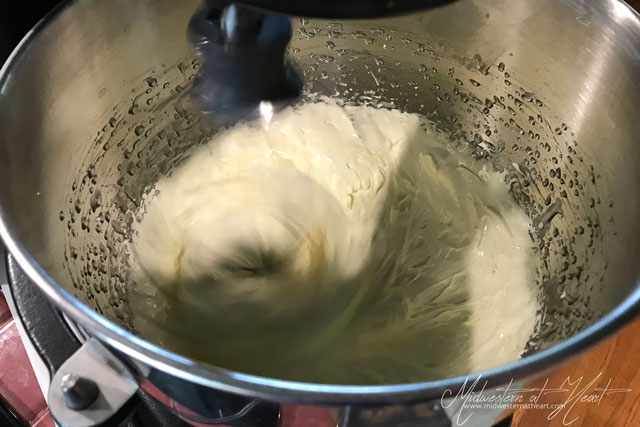 Putting it all together

When we got home, I pulled the buttercream out of the fridge to start coming to room temperature while I ate dinner. That’s when I started having a bit of trouble. I didn’t totally wait long enough. It was getting late and I was getting impatient. Guilty.

Eventually, I did get it to spreadable consistency… aka closer to room temperature. 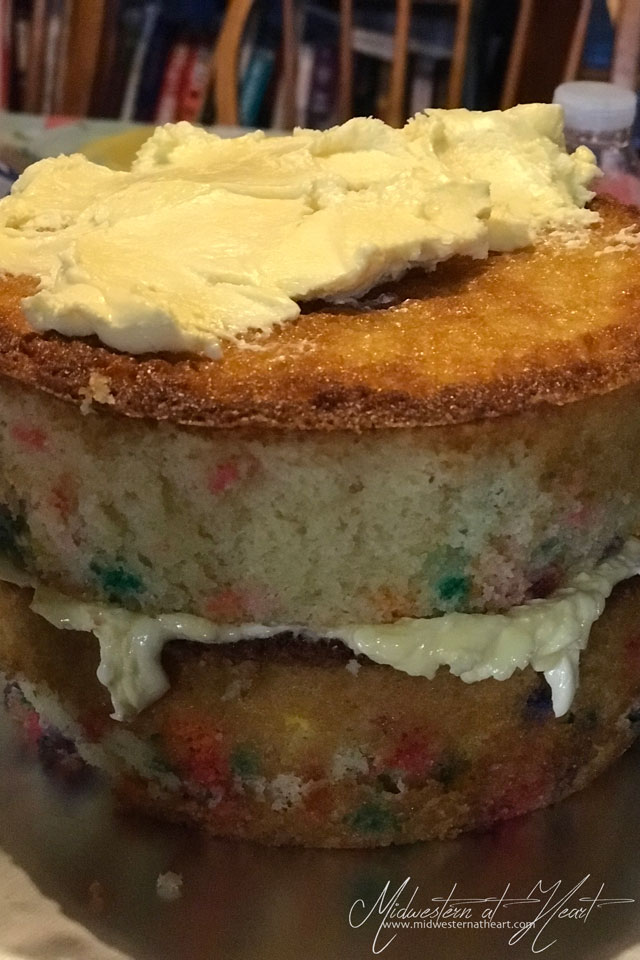 Because I was being a little impatient, my icing isn’t the smoothest. Hubby warned me that I wouldn’t be happy, and while I wasn’t totally, I decided sleep sounded better. haha. Sometimes sleep wins in my book. And some of that got covered with sprinkles. Yey Sprinkles! (Now I hear that Bob and Tom bit about Yeah Toast!) 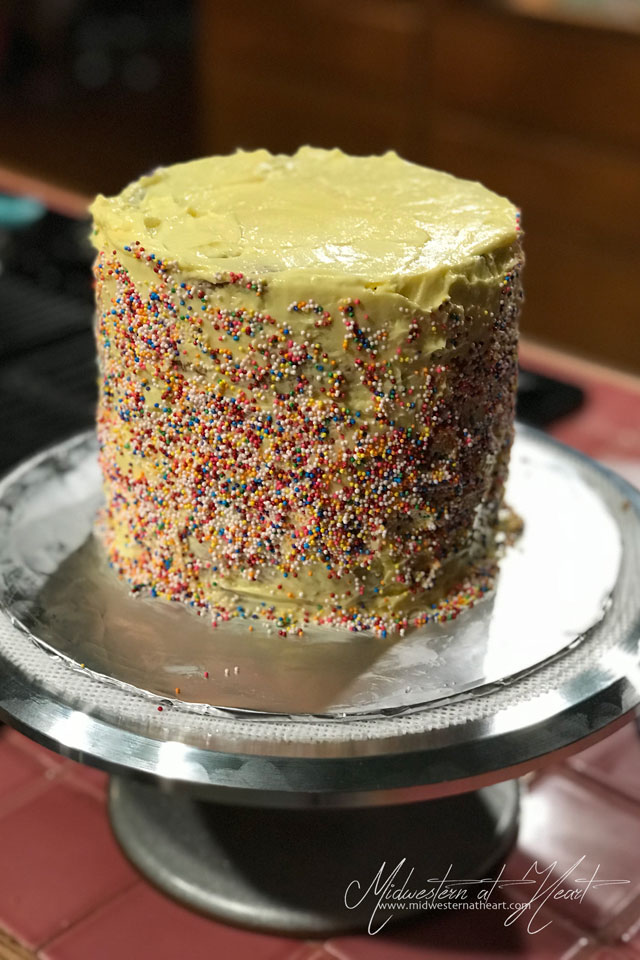 The ganache actually turned out really well. I didn’t have any white food coloring like she recommended so I just turned it blue and went on. I was cool with the color. 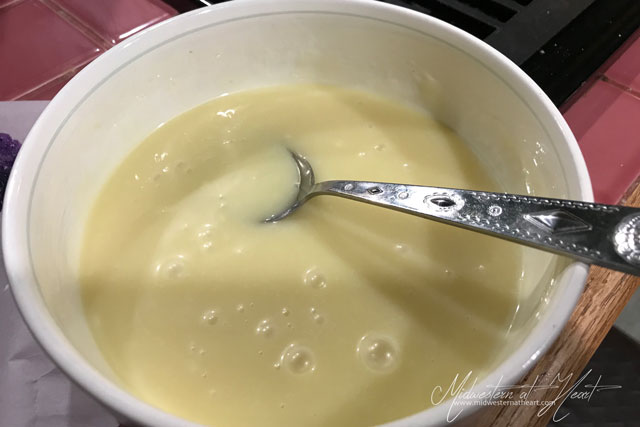 It wasn’t perfect, but OH Mylanta (Hello DJ Tanner) was it freakin awesome! That buttercream. And the cake. I can tell you it was better cold out of the refrigerator than warm as it had been sitting out for a couple hours, but either way, it was still excellent!

Hubby doesn’t tend to eat icing. He eats the cake and leaves the icing. I actually couldn’t keep him out of the bowl of icing. He had to go to the other room. So I say, MAKE. THIS. CAKE. NOW. You’re welcome. It was the Ultimate Birthday Cake. 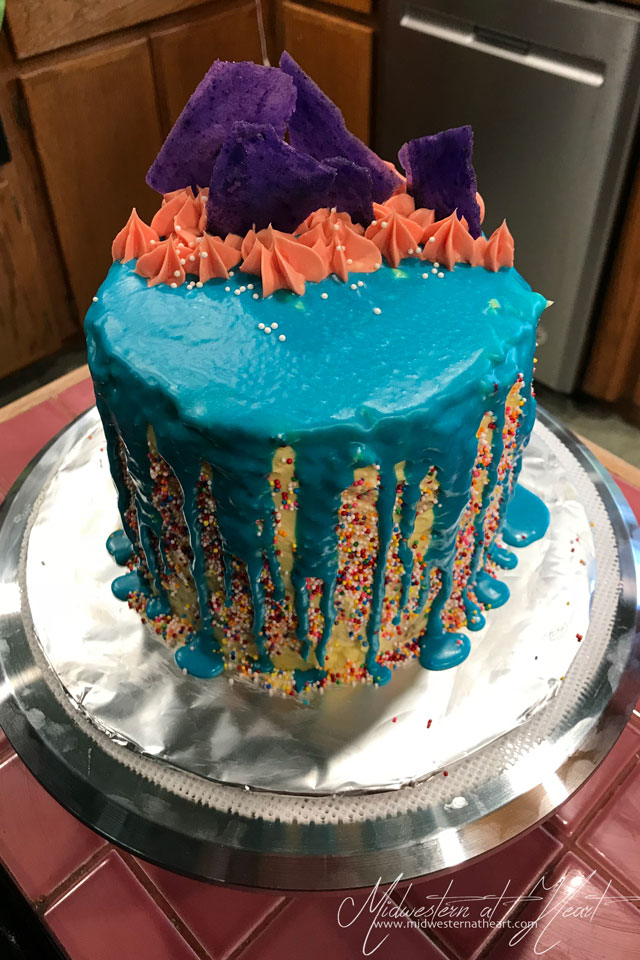 10 Things to Smile about December
Happy Puppy Birthday
I'm One Step Closer to Being on DWTS
Angel in disguise!