So in 2013 we experienced our first Underwater Safari Hunt. And by that I mean we stayed on dry land and watched as those who found animals came up to claim their prize. Sadly hubby and I weren’t certified Scuba Divers at that point in our life. We didn’t get certified until a little less than a month later.

Jump forward to 2014 and I was 38-39ish weeks pregnant and banned from coming down to the lake because they didn’t want to have to duct tape my legs together and drive like a bat out of hell to get me to a hospital if I went in to labor.

So now it is 2015. Plans were to either dive with the divers who were hiding the animals so I could get pictures, or else dive with Tbug when she competed. Enter in what may have been the flu… I’m not really sure. I was out of commission and couldn’t/shouldn’t/didn’t dive. But, that didn’t stop Tbug from diving! She either has to dive with a parent or a dive instructor so we asked Doug if he’d be willing to dive with her so she could compete. He was happy to. Hubby would have dove with her but he volunteered to help with cooking food.

That morning we headed down to the swim beach around 8am because they were having open water check out dives for current students that morning. Also the water levels are up so much that we were afraid there wouldn’t be enough room for people so we had to stake out our spots early on. 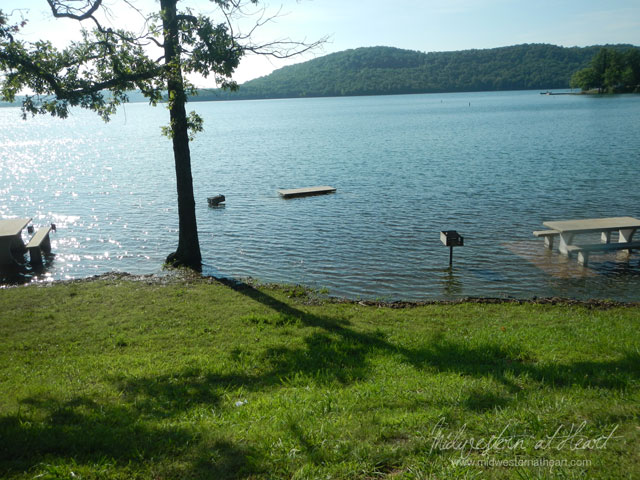 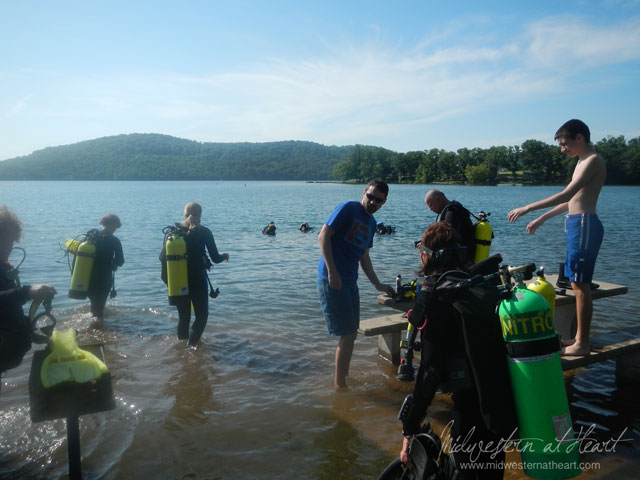 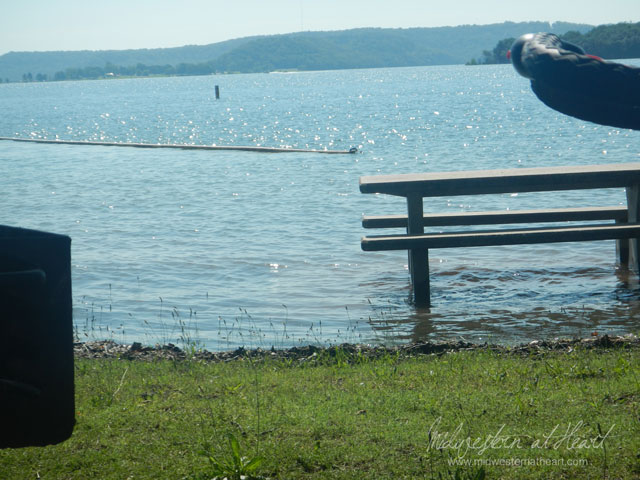 While classes were going on Tbug, Abug and I all ventured around just for fun. I am so happy these two have the sisterly bond that they do have. 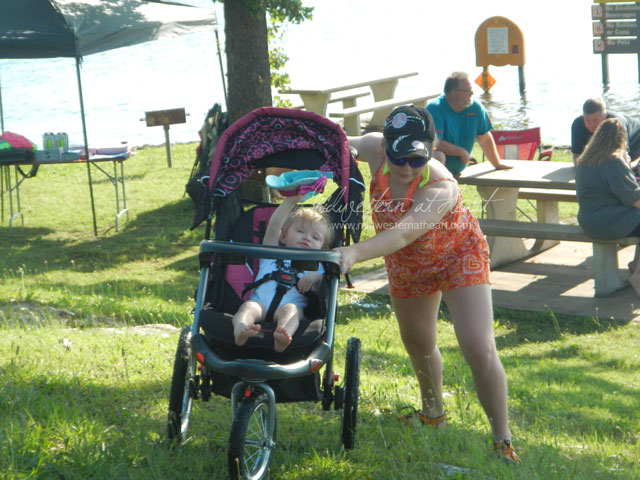 Btw, can you tell how much Abug LOVES cherries by this picture? 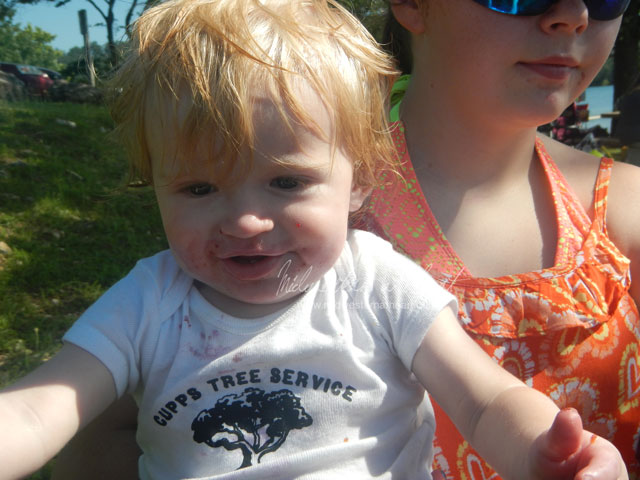 Now Memorial Weekend we had quite the story going on with Snickers. I can’t remember if I blogged about that or not. It’s late right now and I’m tired but anyway we made sure to have the snickers on hand and ready. 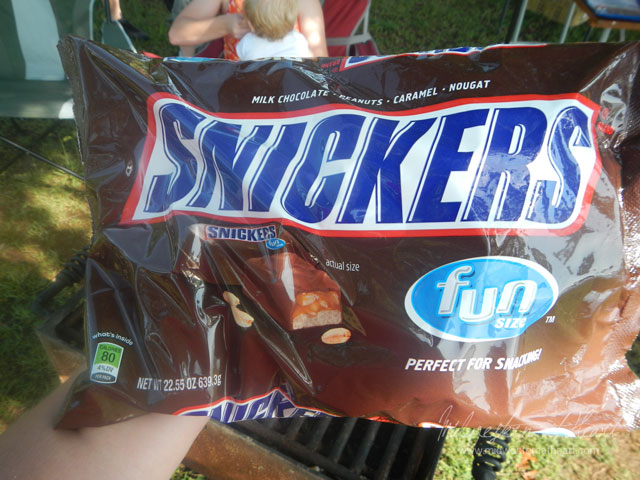 Tbug decided Abug needed to get in the water and “swim”. Daddy said she was getting tired so we needed to get a move on it so Tbug and I stripped off our outer clothes, put Abug’s life jacket on and took her into the water. 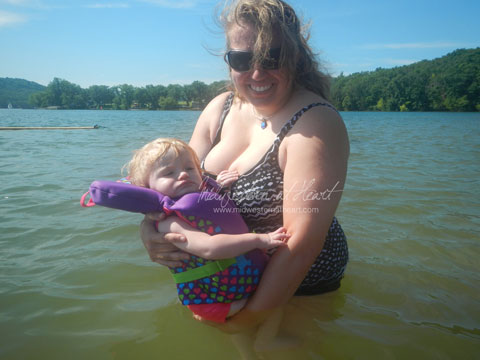 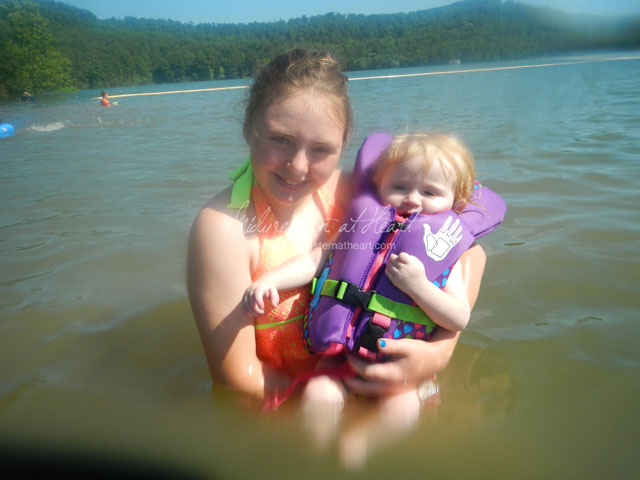 Then I decided that since one of the picnic tables was underwater, it might be easier because she could stand on the bench or sit and still be deep into the water so we ventured over to the picnic table. 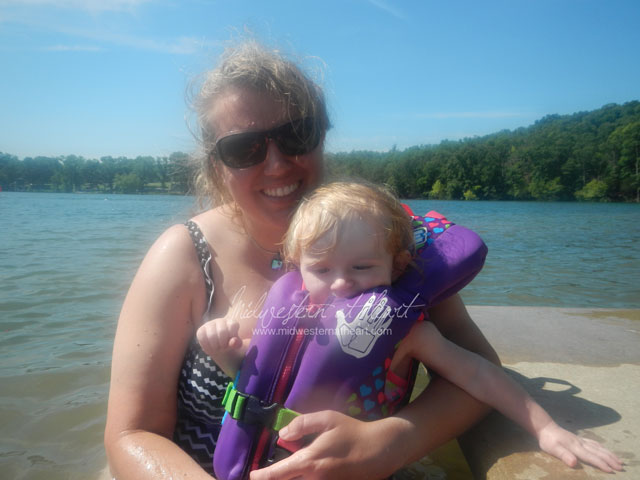 Not only do I have my blog but I am the blogger for Extreme Sports Scuba. Being the blogger I take pictures of EVERYTHING so when they found this scorpion they were hollering for me to come take a picture of it. 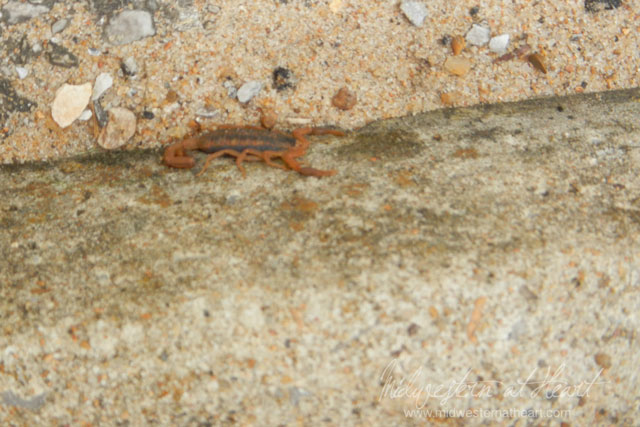 Finally it was time to start signing up to do the Safari Hunt. Hubby grabbed Tbug and they went over to sign up since she’s “underage” and has to have a parent/guardian’s signature. 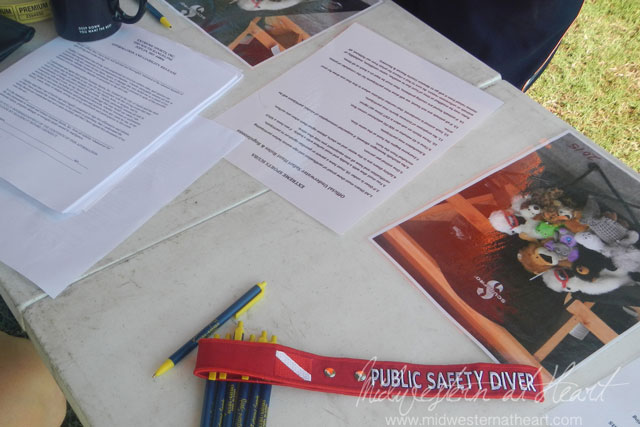 And proof that the animals made it and weren’t forgotten 😉 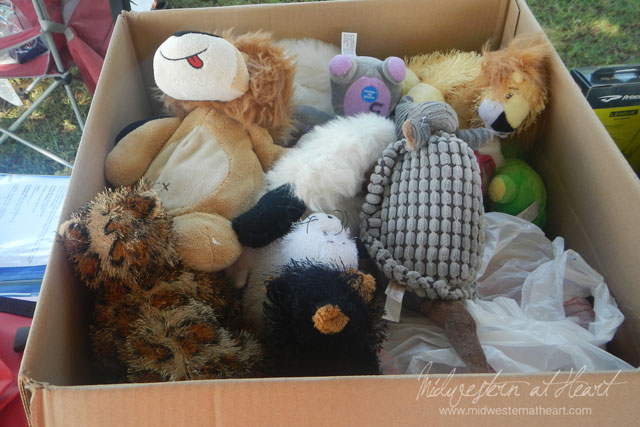 At 1:30pm the Safari Hunt was to start. Then you dive to either 500psi in your tank or 45 minutes. At 45 minutes the duck call is sounded and everyone comes up. There were 12 animals that were hidden and 29 divers. Some of the divers were just dive buddies while others were on the hunt.

So if you don’t know about Scuba Diving, you’re only supposed to dive solo if you have your solo certification. We are trained through SDI and to get your solo certification you need to complete 100 dives before you can take the class. That’s why some were just “dive buddies.” They weren’t actually looking for an animal but more so just making sure someone could dive. Now buddies makes it sound like it’s just 2 people but you can dive more than 2 as long as you know that you’re all doing that and you keep track of each other.

Grady gave the rules/regulations and then they sent the divers off. 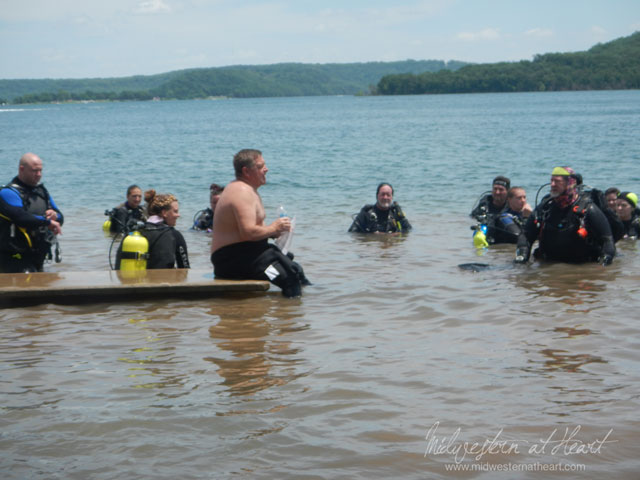 At one point I saw Doug and Tbug come up and thought maybe she got an animal. Then I noticed that they were doing something so I wondered what was going on. She didn’t have enough weight to go down so Doug was giving her a few more pounds. Basically you want to be neutrally buoyant and sometimes if you are too light you have to work too hard to stay under water so we add weights to our BC’s (that vest thing the tanks strap to).

They finally got their problem solved and went back down. Eventually they came up and Tbug had a Green Gator! Yey!!! 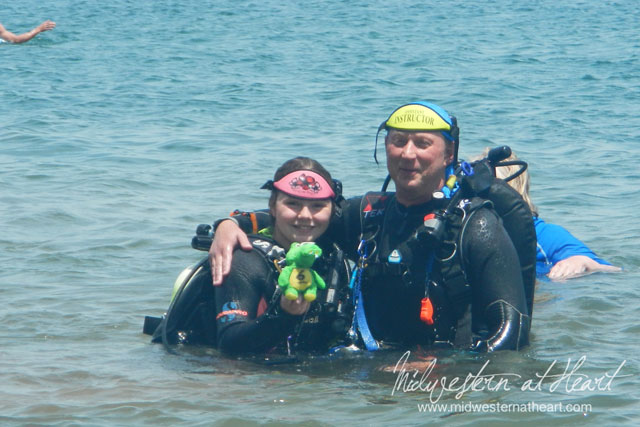 So Tbug comes waddling out of the water and I asked her why she hadn’t taken her fins off yet. She was like I don’t know and then belly flopped down into the water to take them off. We all just cracked up laughing at her. Especially when she started flailing around like a beached whale. Now as you can see by Doug she wasn’t in very deep water and Doug was having to help her get her fins off because she was being a goober :). That’s okay the flopping into the water she gets from me, the flailing and being a goober she gets from her daddy :). 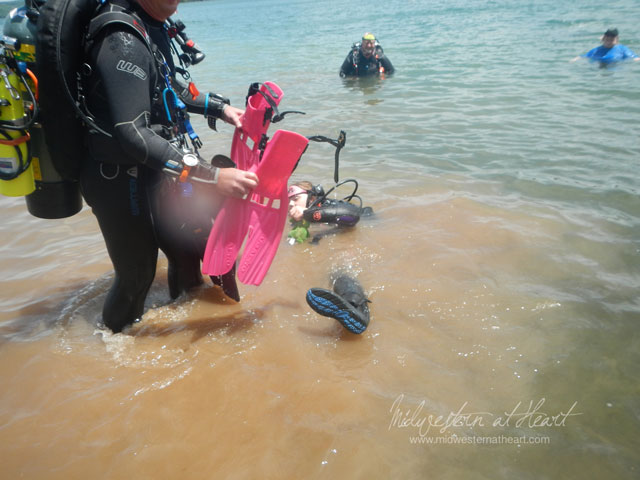 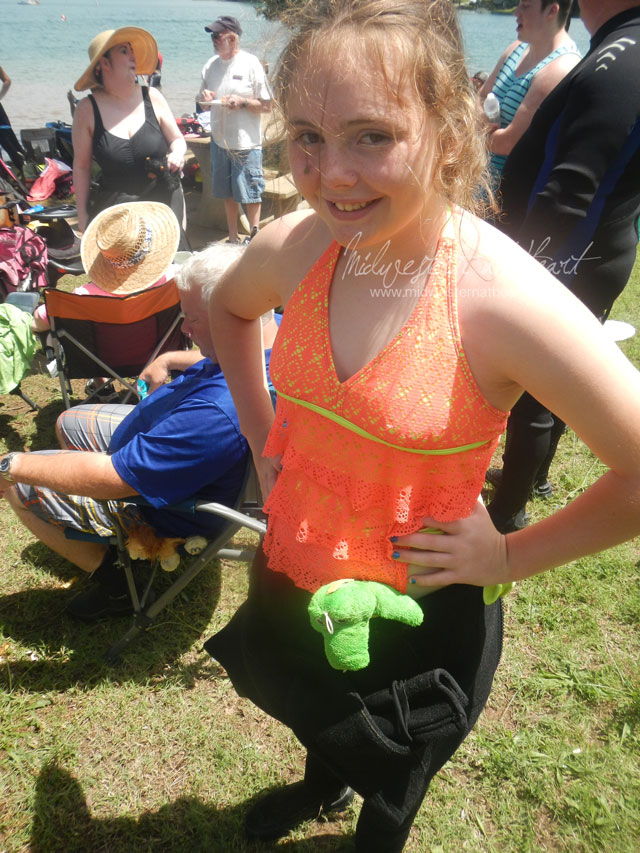 So each animal is numbered. This year they wrote the order down and then they go through the numbers. Each person then goes up when it’s their turn to draw for a prize. Tbug won a collapsible cooler. It’ll be great for our trip later this summer! Someone else took the opportunity to nap. 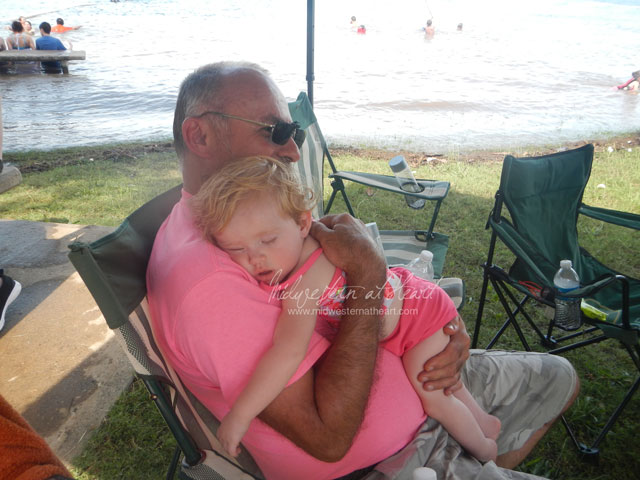 Big R's Bar-B-Q - Joplin, MO
A Week in Southern Oklahoma - Part 1
A Picking We Will Go
Self Doubt (through Sugar Cookies)