It’s that time of year… How on earth did we get to the 4th of July? The thing that the fourth of July brings besides celebrations of our Nations heritage and food, parties and get togethers, is fireworks. Who doesn’t like fireworks? I guess there are those out there… but I’m not one of them. I love them.

So the next thing to think about is how do you capture them on film? If you’re ever around me or you’ve been on my blog for a while, you know that I take pictures of EVERYTHING and I mean everything. Although every once in a while I miss a shot and have a #bloggerfail but usually I take pictures of Everything.

A couple years ago I went to every fourth party I could to learn how to take pictures of fireworks and today I want to pass along some of the tips and tricks I learned along the way. 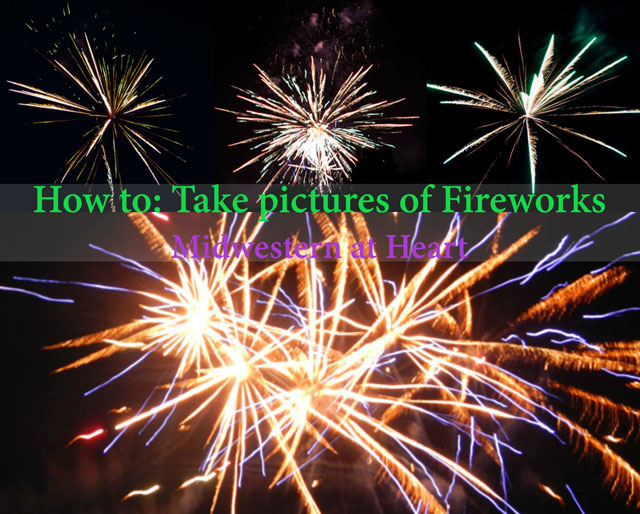 Normally people would tell you that you have to have a dSLR to be able to take photos like these. And while I’m not going to lie, it is helpful, I didn’t take all those photos above with my dSLR… Nope, I took one of them with a point and shoot. Can you guess which one?

So my first recommendation would be to get a tripod. If not a tripod, make sure you have a very solid foundation for your camera to sit on to avoid camera shake.

Maybe I should have stated my first recommendation would be to have a camera… or maybe that is just a given. Okay moving on…

Okay now for the settings for a dSLR to take great photos of fireworks.

ISO: 100. Now normally that would be what you set it at for a bright and sunny day… and you might be thinking, but wait, what… these will be at night. Oh but that’s the way to do it. First off at night you’ll get a lot of noise, especially by bumping up your ISO. To avoid that and with fireworks being extremely bright against the night sky you don’t need a high ISO.

F-stop: f/8 up to about f/16. Your choice but you want it at least f/8 or greater so that more of your shot will be in focus.

Shutter Speed: This is where you have to experiment a bit but usually 15-30 seconds give or take… Again, play with it. Find your first firework, practice on them as they just start it. Then you’ll be ready for the grand finale.

Focus: Now one thing you’ll have to do is set your auto focus to infinity. In not going to lie, this is a bit difficult for me… I think part of that is because we only get to practice on fireworks one time a year. So one way to do it is get your focus set and then turn auto focus off so it doesn’t accidentally refocus while you’re shooting.

One way to set your focus is when it is still early in the evening and you’re practicing on that first firework, set it and forget it. Otherwise set your focus way off in the distance and you should be set to go. It’s another one of those play with it things.

One last piece of advice is get a remote and set your camera on a 2 second timer. That will help alleviate camera shake with the help of the tripod (or stabilizing thing).

And then once you have it all set up, take pictures! Practice makes perfect!! 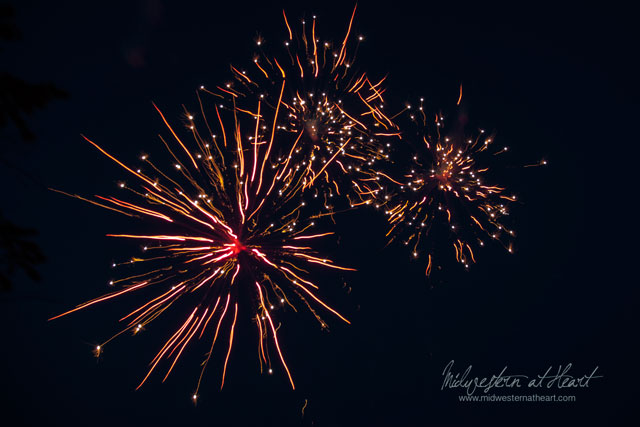 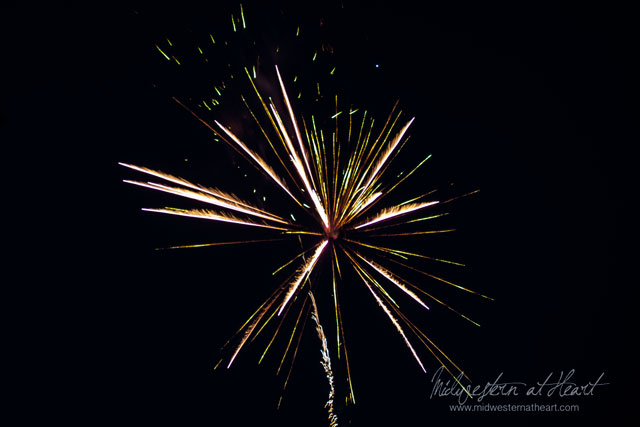 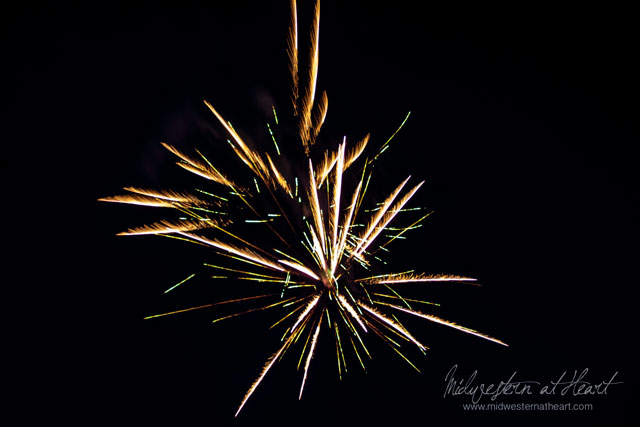 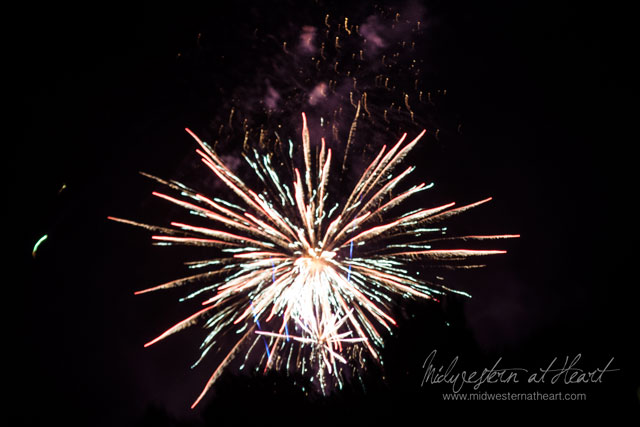 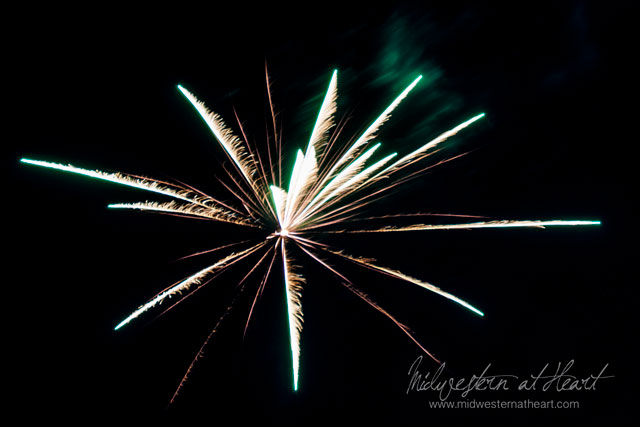 Now I stated earlier that you didn’t need a dSLR to take fireworks photos… I have proof. Last year I took a picture with my Nikon AW100 Point and Shoot and it is one of my favorite fourth of July photos.

You can use a tripod and a 2 second timer but I haven’t had much luck doing that with my point and shoot. But this… this is the type of photo you can achieve with a point and shoot… 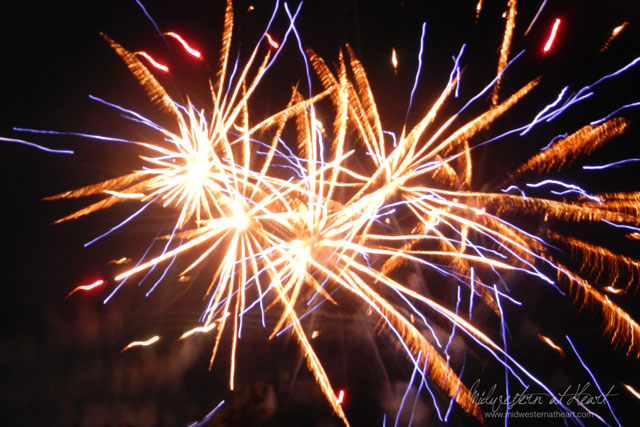 Okay, I’ll leave you with this one last piece of advice… get the audience who is watching the show. It’s all part of the night! And when all else fails, lose the color and turn it black and white. It’s more dramatic that way anyway! 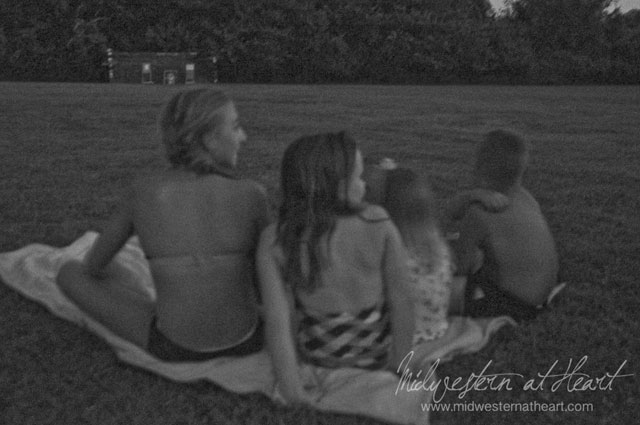 Have a Happy Fourth of July!