Back in 2010 just before I got married I was sitting around one day and started thinking about the journey that hubby and I had been on that lead us to getting engaged and everything that lead to that day that we said “I Do.” As I thought of the story I started writing it out. If you’re new to these parts, you’ll definitely want to get caught up on the back story and click on this link will take you to a post containing all the previous links. Then one day earlier this year I read back through those posts and started thinking again. The more that came to me, the more I wanted to get this story written out so I didn’t forget. 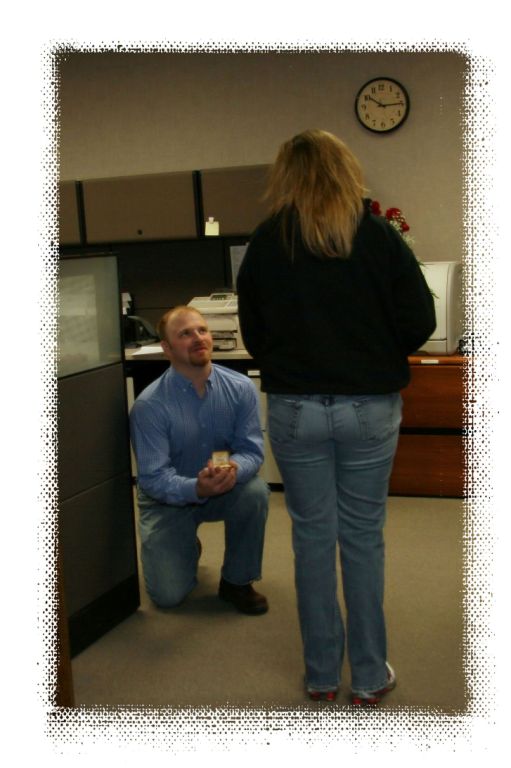 PC proposed to me at 10:15 that morning. He stuck around for about 20 minutes or so and then eventually went back out to his truck. Once noon rolled around I went out and met him so that we could go to lunch together. He made the comment that he had contacted my boss to plan this whole event out so that I wouldn’t get in trouble. He also said he wished he’d have thought to ask for me to have the rest of the day off. He also thought it would have been nice if my boss would have just told me to take the rest of the day off, but he didn’t so we just went to lunch.

Once I was in his truck and buckled in, he asked where I wanted to go eat lunch. I told him I really didn’t care. He asked if Subway was okay and I told him that would be fine so we headed into town to Subway. I was on cloud nine, so much so that he had to order my lunch for me because I couldn’t think. After lunch was over he took me back to work and dropped me off. He said he’d be at my parent’s house waiting for me later that evening when I got off work.

That afternoon I shot my mom an email and asked if she had ridden to work with my dad. She said that she hadn’t, she actually drove herself to work and asked why. I told her I needed someone to hold my flowers home, but I’d just buckle them into the seat like I used to do in college when I took my floral design class. I was pretty worthless that afternoon at work. All I could do was replay the mornings events in my head and stare at my ring. People would come by after they’d heard what happened and ask what happened and I’d tell them the story.

Finally 5pm hit and I hit the door running. I couldn’t wait to get home. As I pulled into the driveway he was standing outside leaning up against his truck smiling at me. I pulled in and put my car in park and ran over to give him a hug, then he helped me get my flowers out of the car and carried them up to the house for me.

Also in the note that was attached to the flowers he said that he had a room reserved for us at the Hotel Grand Victorian in Branson for Saturday night. We already had plans to drive down Saturday morning to Branson to watch his daughter’s cheer team perform but he said he made special arrangements for us to stay in a hotel down there to celebrate the engagement.

Saturday morning he got up and went out and did chores with my dad while I got up and started getting dressed and packed. That morning I decided to curl my hair so I plugged my curling iron in. While my curling iron was heating up I grabbed my suit case and started packing my bag. This was quite shocking for me because I’d never stayed in a hotel room with anyone other than my parents or girls so I was a bit nervous to share a hotel room with a boy, even if this boy happened to be my fiancé.

Once I was dressed and packed we were ready to head to Branson. I was so nervous I was about to throw up. Not only was I going to be seeing his daughter after saying yes to her daddy’s proposal, but this was really the first major contact I would have with his ex in any kind of time frame. I wasn’t sure how I felt about the whole situation.

We loaded up our suitcases into the trunk of my Mustang and headed for Branson. From my parents house to Branson you wound up going past Springfield. I asked PC if we could stop at the Walmart store in Springfield to pick up a wedding planner binder that I had had my eyes on for years, just waiting for that moment that I could buy one to fill out. He laughed at me and said yes. We stopped and while we were there we picked up doughnuts and drinks for the rest of our trip to Branson and then we headed on the for the last 30 minutes of the trip.

I immediately ripped open the binder and started filling out information about our wedding. It was chilly that morning and very gray but other than that the weather was nice and holding out. Remember, my car sucks on bad roads.

As we got closer to Branson I plugged in the address into the GPS so we could find the place where Tbug’s performance was held; it was held in a hotel down on the landing. When we got there, we found a parking garage, got the ticket and drove in to park my car.

Just as we got out of the car to walk over to the hotel I got a text alert. It was from my ex saying congratulations on the engagement. We both looked at each other like, why in the heck would I be getting that. I was nice and replied back Thank You and then deleted the text and we walked across the street into the hotel.

We wandered the halls looking for the FSA parent shirts or the girls and finally stumbled into the group of them just as they were heading into the performance room so we followed suit. When we got in there, there were single girls doing cheer routines up on the stage. I asked hubby what was going on and he didn’t know so I got up the courage to walk over to Tbug’s mom and ask her what was going on.

Finally it was time for Tbug’s group to perform so the whole group of FSA parents to move up in front of the stage so we followed the group up to watch the girls perform.