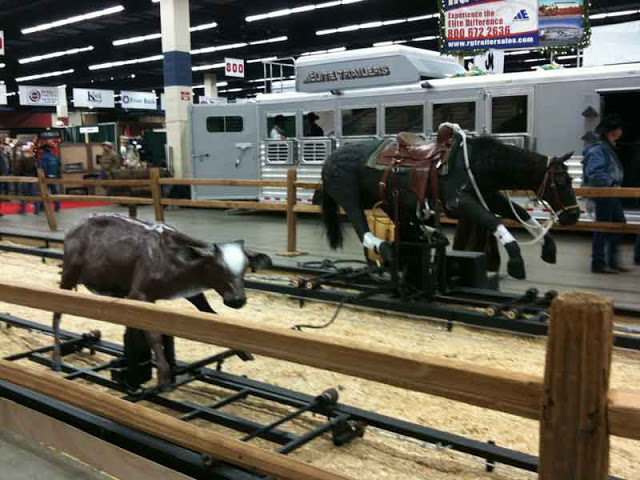 So last week we postponed the word since Prince Charming and I were going to a “Horse” Showdown in Ft. Worth Texas. It only seemed appropriate to postpone Horse until then. It was a great show and when Michael Cooper marked a 226 we thought the show was won. I made the comment to Prince Charming, man that’s a hard score to follow, I wouldn’t want to do it, but sure enough the very next guy, Tom Piggot outdid Michael. Tom scored a 229. But the minute that Michael hit that score, that set the finals of the OPEN NCHA Cutting Futurity into an excellent show. Up until then, it was just okay. My uncle was in the Non-Pro and made it to the Semi-Finals. We were very proud of him! This was Prince Charming’s first time to go to the Futurity ever and I sure think and hope he had a wonderful time. Now it’s time to come home and get ready for Christmas! After the 1st of the year, the shows will start back up.

Before all the finals they do rider introductions. All the riders ride down on a horse (usually a turn back horse) and they are introduced in the order they will show. Then the Prayer is conducted by a local preacher and then the Star-Spangled Banner is sung. After that, they have a horse race back behind the judge’s stands. It’s fun to watch b/c at times it so looks like they will crash into each other.

Prince Charming:
This year was the first introduction of the “Mechanical Horse & Cow”. It is the closest you can get to riding a cutting horse without being on the back of one. They had free rides and we wanted to ride but never tried it out. You had a seatbelt that secured you on the horse (in case you thought you’d fall off but they made everyone wear it).

If you want to know more about the show results, the type of horses that I show, or this mechanical cow visit: www.nchacutting.com
Next weeks project word (phrase): Christmas in the City