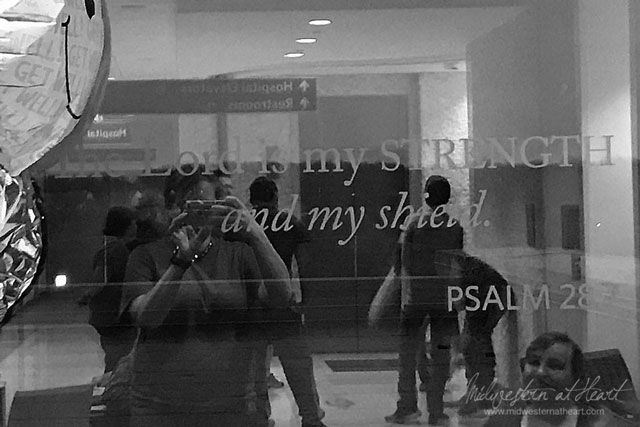 This has been quite the last couple weeks of emotional roller coasters. It started 2 weeks ago this Sunday. Hubby, Abug, and I were at breakfast with my parents when hubby’s sister called. She called him first and then me, that’s an obvious sign something is wrong. So I immediately called her back. We found out that his grandma was headed to the hospital.

Grandma woke up that morning not feeling well but insisted on going to Church. When they got her to church hubby’s cousin is an EMT so she grabbed her stethoscope and listened to grandma’s heart/breathing. Decided she needed to go to the hospital so hubby’s Aunt Robyn loaded grandma up in her car and took off for the hospital.

The hospital is maybe 10 miles from the church if that. They went out the main drag to the highway and from the highway entrance it’s like 5 miles. The hospital is out on the highway. I guess when Aunt Robyn turned on to the highway Grandma had been saying that she was having trouble breathing. AR told her to breathe from her nose (she’s on an oxygen tank) and that’s when her eyes rolled to the back of her head and she quit breathing. AR found out her car will run 110 mph on the highway. She turned on her 4-way flashers and put the pedal to the metal.

By the time we got to the hospital a lot of the family was there in the waiting room, but no one knew anything. They were still trying to get Grandma stable. We sat in the waiting room until about 3pm that day. They finally got her stable, but had her sedated so she didn’t try to pull the trach tube out. We were then able to go back and visit with her.

Now our small town hospital is very lightly staffed so they usually use it as a transfer hospital these days. That being said, they couldn’t get an ICU room over at the bigger hospital for grandma so they kept her there until around 7pm or so that day when finally an ICU room opened and they transferred her.

She was in the CICU for a couple days and then they moved her out of the CICU to a regular room. I guess over night that night she went into cardiac arrest, but they really didn’t do anything and she was back so they moved her into the regular ICU. She spent a few days in the regular ICU. If you know anything about the regular ICU, children under the age of 12 aren’t admitted in, but the nurses were so awesome and let Abug and EA back to see grandma. They just “turned their head” because I guess they thought it was the end.

So grandma spent a few more days in the ICU and then was stable enough to be placed into a regular room. She was finally released from the hospital on Tuesday, when I thought my world was falling apart.

To add to the stress of it all, we knew hubby had to go out of town for work on Sunday. If something would have happened to grandma I was stressing out about how we were going to get him home, and then it turns out I had to get him home anyway. Although technically I didn’t have to get him home, 1) Abug was in good hands and 2) Hubby got himself home, I was busy with Abug in the ER.

So to say I’m spent this week is an understatement. This morning Abug woke up with another fever. I’ve given her medicine and I’m scared to let her out of my sight. I actually let myself go to sleep last night after 1am and slept until 9:30am this morning, but the last 3 days I’ve been running on max 8 hours of sleep when normally I’ve had 16-18ish hours of sleep.

The Under Dog
I Love Agriculture!
Pensacola Beach, Florida, TGI Friday's at DFW, Our Trip down
Unicorn Cupcakes