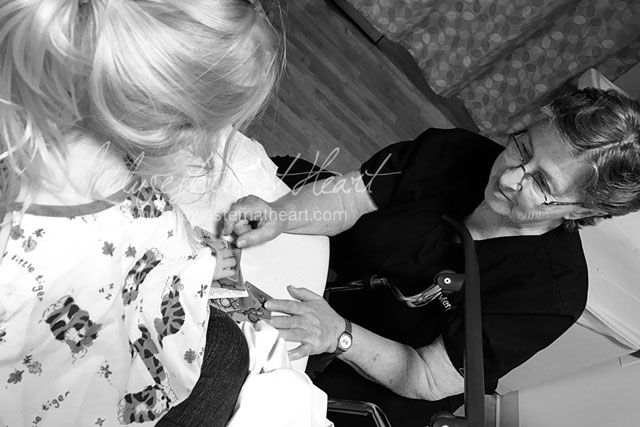 My blog has served as many different outlets throughout it’s 7 and 1/2 year existence. It has been a place to vent, a place to share, a place to remember. And some things I share I want to remember where other things I don’t really know if I do, but I do at the same time if that makes sense.

Yesterday was one of those latter moments.

Let’s start Monday night. The dishwasher isn’t working, so I went to handwashing all the dishes that were in the sink plus the dishwasher. My baby came in and said she was tired and didn’t feel good. It was 7:30ish so that’s kind of normal, the I’m tired speech. I told her to give me a few more minutes and we’d go take a shower and go to bed. She went in and laid down on the floor in front of the couch, not normal for her so we got her up on the couch, at least a little softer. A little after 8pm I got finished with dishes and I took her upstairs for a shower.

When I pulled her out of the shower, she felt warm, so I found the thermometer and took her temperature under her arm, which they say you add a degree to. So 98.7 degrees with the added degree. No big deal. Hubby was out of town for work, so we were FaceTiming him so that they could see each other. Just as we went to get off the phone, she threw up all over the bed, herself, her pillow, pretty much everything but me.

So I put her back in the shower to clean her up, pulled the bedding off my bed, and decided to take her temperature again, this time under her tongue. 101.1. Okay, so for sure she’s running a temperature now! So I gave her some Children’s Motrin which is what they say to use along with Tylenol, back and forth. I woke myself up at midnight and gave her the Tylenol. I checked on her multiple times throughout the night, in fact I didn’t sleep well.

The next morning I woke up, she was hot but when I’d take her temperature, normal. I was getting frustrated because that didn’t make any sense. She kept saying she didn’t feel good, so I went ahead and gave her more Children’s Motrin just to be on the safe side.

Around 2pm Tuesday I went to put her down for a nap. I gave her her new ba (her cup with milk in it) and I went into the bathroom. I can see my bed from the bathroom and she was in there chattering away at me. Then all the sudden I realized it was quite. I laughed and said, I don’t think she fell asleep that fast… Then looked in on her and realized she was shaking. Not violently shaking, but not shivering either and I remember saying, surely she’s not having a seizure..

I ran over to her to check on her and her eyes were rolled to the back of her head. Her lips were purple. She was drooling and she had totally wet the bed and her pants and everything else. I started to freak out, but realized I couldn’t. I learned in college education classes of all places that if someone is having a seizure, roll them on their side and keep their airway open. It’s best to have them on a hard surface or anyway those are the things I thought I remembered. I quickly called my aunt because she’s a dr just to verify what I did was correct and make sure I didn’t need to do anything else. She said I needed to get her to the ER immediately. She was so stiff though I knew I couldn’t get her in her carseat so AC recommended calling 911 and getting an ambulance

By the time the ambulance got here, I moved her down and we were sitting in front of the door waiting as patiently as I could…. (I was being patient but minutes seemed like hours, I kept saying make them hurry. They were here in 10 minutes which is probably about right really) When they got here she was sleeping. She woke up just as EMT walked in and she panicked and wanted mommy. We calmed her down and they checked her out and decided to take her to the ER. So we hopped in the ambulance and away we went.

7 hours later they determined that she had a Febrile Seizure which is caused by a quick spike in fever. It is apparently common (1 in 4) in children toddler age to age about 5. It doesn’t lead to seizures as an adult or epilepsy or anything like that, it just supposedly has something to do with genetic makeup of children versus adults.

I’ll tell you that was the scariest thing I have ever seen. I had to keep it together. The lady on the 911 call kept saying I couldn’t cry. The doctor in the ER told me to cry and let it all out. To add to my stress, hubby was in Texas for work. Luckily his company has a company plane that had a flight coming home from there yesterday afternoon so he was able to hop the flight and get home. The pilots knew he was coming home to this so I guess they hauled butt to get him home as quickly as possible and my dad went to pick him up at the company airport.

This was narrowed down to all starting with Influenza B… the flu. ugh! When I got home around 10:30 last night I lost it. I broke down and sat on the floor and ugly cried. I have had so many feelings go through me in the last couple days. Apparently every time I turned around I was apologizing for something. So anyway, that was my Monday and Tuesday… how was yours?

E=MCsquared
I Painted a Purple Cat... or something like that
DWTS live Perfect 10 Tour, Springfield, MO
Jerry chello