Why is it so hard as individuals to admit defeat? Have I been defeated? Well, the answer is technically no, not yet.

Growing up I’ve always had a fighting spirit. I always knew I could do better and I was always willing to strive for better. I didn’t have to be the best at everything, I always wanted to outdo myself from the previous experience.

In 1998 I joined FFA. My mom thought I’d use horses as my FFA Project but I wanted a challenge. I had shown horses my whole life, I wanted to learn something new. That’s when we decided as a family on sheep. That first year I knew absolutely NOTHING about sheep. And every time I showed, county fair, district fair and a couple local fairs, I was last. I didn’t know how to properly groom and/or show a sheep to save my life.

Were there times I felt defeated? You betcha. But I got there. When they awarded me all three of those awards, I cried. From that first year where I was last place in every class to actually being a champion, that was an accomplishment. Was it easy, NO! Did I get defeated? A lot. Did I wind up falling? Literally… hey, I had a ram step on my foot, trip me, I never let go of him, instead I drug the 200 lb ram (who weighed more than me I might add) down on top of me. My dad came to help me get up and I refused to let go of him. I had a huge foot print in the middle of my gut (white shirt, it was great) but I never let go. Or the time I had a ewe running full blast down the hallway of my parents barn at me. The only thing between her and the great outdoors was me. I leapt on her and we went rolling down the hallway only to come up with her in my arms. My mom was scared about what happened if she got past me because she was hell bent for election and she wasn’t going to stop. Anyway… the falling down part isn’t so much referring to my gracefulness… more so my determination…

And as I mentioned, I grew up showing horses. Did I start from the bottom… yup. I think my favorite story was… Around 2005 or 2006 I was showing in a class that if you were the first person to lose a cow showing, you won a pair of splint boots. When I show horses I refuse to listen to scores. It keeps me out of my head of I have to do better. I sing songs, I talk, I do whatever I have to to not hear scores. This day was different though. There were 32 horses in the class and I was dead last. And no matter how hard I tried, I couldn’t ignore scores. The first horse lost a cow = pair of splint boots. Not me… I was last. I heard a score of a 70, 71, 72, 73, and a 74. I looked at my dad before I went in to the show ring and said, well I can’t win splint boots, I guess I have to go out and win this sucker. Dad laughed at me and said, just go out and show your horse. I wound up going out and marking a 75 which meant I won the class and a really nice check. Yes, I won cash! 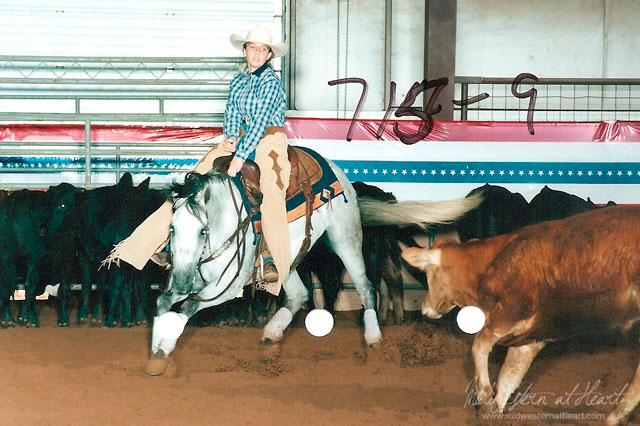 Is it always that way? Heck no. More times than not I’ve been at the bottom of the class but I always say, I plan on doing better than the last time I showed. I was always in competition with myself and others, but with myself.

And admitting that makes me feeling like a complete moron. So I guess if nothing else, this endless babble is to try and convince myself that I’ve been on the bottom before. I have no direction to go but up.

The difference between say 15 or even 23 year old me and now me is I’ve had a lot of people put me down and tell me I’m not good enough in my life. Used to I told them they were the idiot for not believing in me and then I’d go out to prove them wrong. And now, well, now they’re in my head a little bit. I only have 2 more chances to pass comps. What happens if I don’t? We don’t know.

In the written rules, you’re basically screwed. If you don’t pass, you’re kicked out of the program. Now they’ve never had anyone get kicked out, but that’s not because everyone has passed. They had people fail twice and then not take the third round for fear of defeat. At that point… either way if you don’t take the test or you fail the 3rd time you don’t graduate so why not take the chances and try that 3rd round? I don’t know.

I guess I just need that kick in the pants pep talk to tell me I’m not an idiot and I’ll get it. I got props on my knowledge of the work, they just thought my answers needed to be a little more tight and cleaned up a bit. I have no clue what that means, so I guess now I get to find out before the end of March. Yup, that’s when I get to take these again. Oh and I get to take my second round 4 days after retaking the first round. Oy vey! Wish me luck.

Between now and then I might kick my own butt… wish me luck on that too.