What do you do when it’s been raining for almost a week straight and you finally get a reprieve in the weather? Sunny and 80’s+=Girls Road trip!

Friday morning my mom sent Abug and me a message and asked if we wanted to go to Springfield for the day. I suggested going to Rogers instead and she was good with that. On my way to my parents house I wondered if Tbug would be able to go too and we could just make it a girls day so I got a hold of her mom (especially since it was our weekend to have her) to see if it’d be possible to get her early and it was. Score! We picked her up and made a day of it!!

So when we got to Rogers to the mall area we love to go to it was time for lunch. Normally we go to 1 of 2 places, Fish City Grill or PF Changs. This time around we chose Fish City Grill. I surprised Tbug that I chose this place. I only chose it for the dessert and I’m not a big dessert person… does that tell you something? (Mom’s not pictured because she refuses to be in photos…) 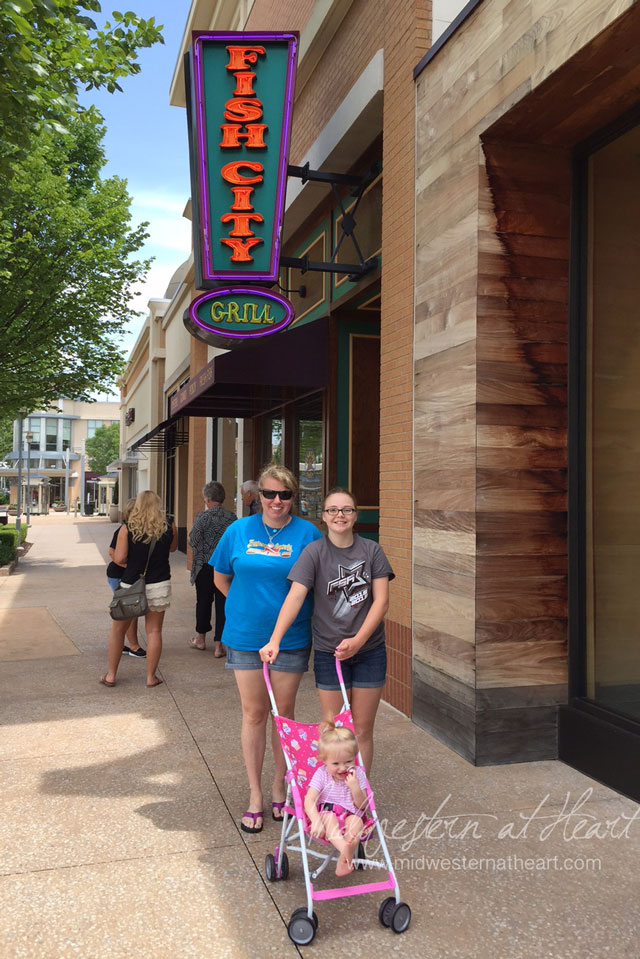 While we were waiting to place our order we took some selfies to send to Dad (hubby) just to be ornery since he was stuck in doors at work today. Shame on us, we’re mean, but it was oh so fun! 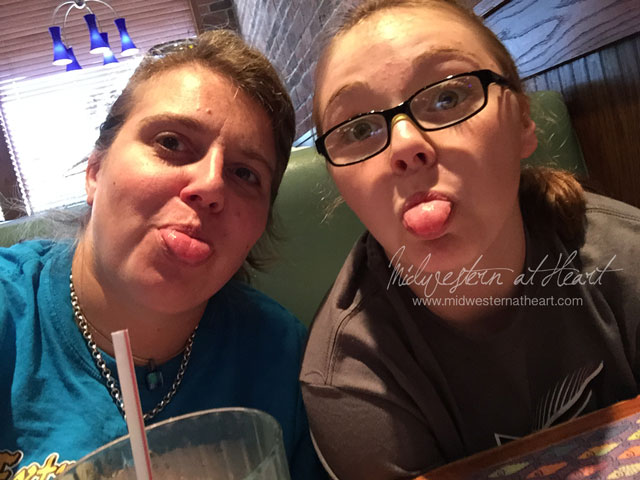 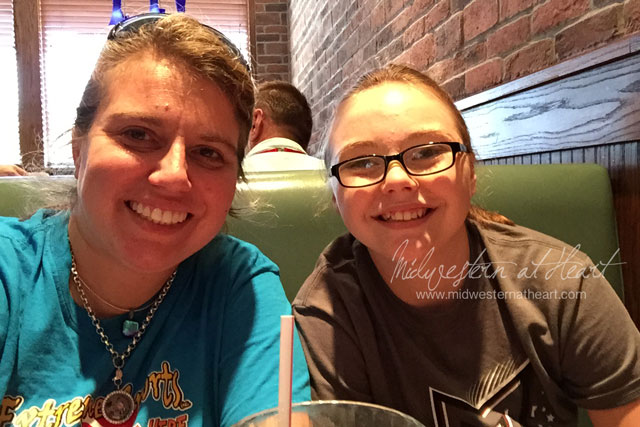 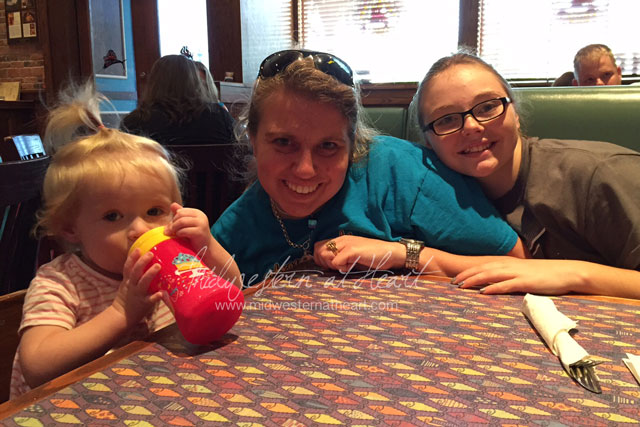 Tbug went for the Catfish. She had the option of grilled, fried or blackened. She went grilled. She said it was great. I’ll take her word for it. one I’m not a fish person and 2 I’m fighting some kind of bug and didn’t want to give it to her by eating after her. I was careful. 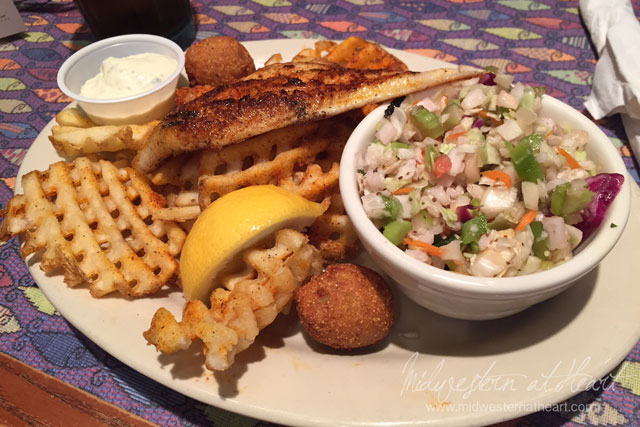 I went for the Shrimp Nachos. Those are what I got the last time we went there. Still worth it. Mom and Tbug had some too. It was huge! I’ll eat Shrimp even though I’m not a fish person but the shrimp has to be cooked just right too. This, this was okay in my book. I can’t do it if it tastes fishy. 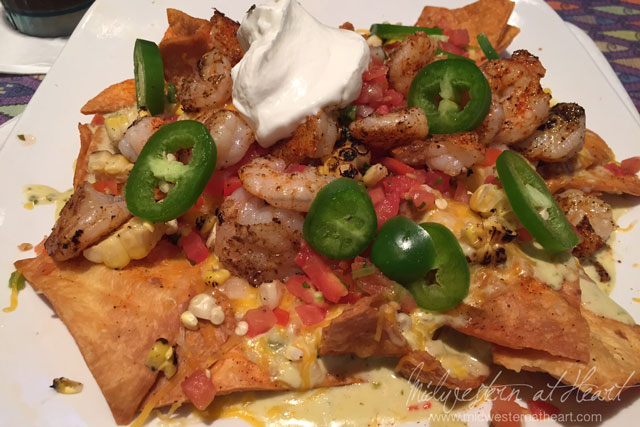 Mom went for the Crab Bisque Soup and a side salad. Abug LOVED mom’s soup and probably ate half of it herself. Not kidding. 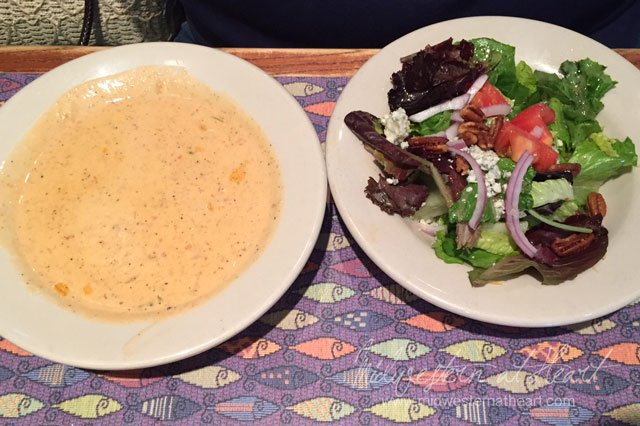 And Abug wanted to show you how to eat fries. These were waffle fries that sissy shared with her and this is the proper way to eat them in case you were unsure. 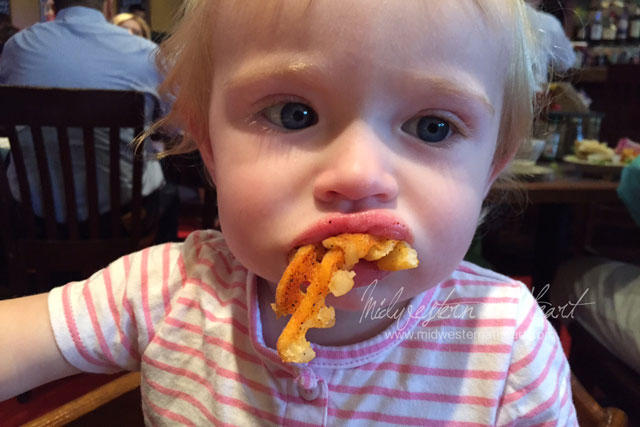 Then it was FINALLY time for dessert. Mom ordered Key Lime Pie and the Bread Pudding for the table. I didn’t try the Key Lime Pie because I was totally wanting the Bread pudding and it didn’t disappoint. The whole reason to go here to eat IMO (in my opinion) and I’m not really a bread pudding person… what does that tell you? I’m just saying! 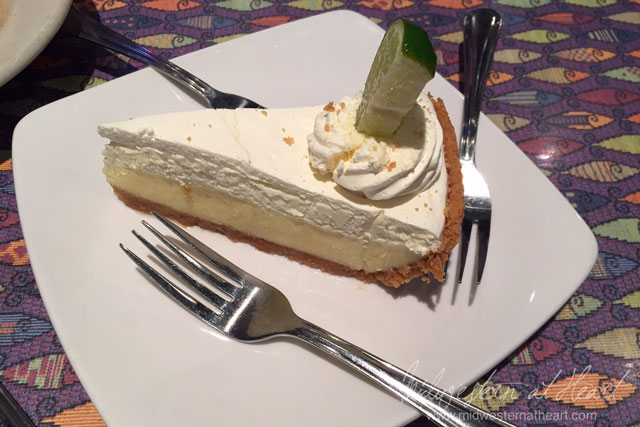 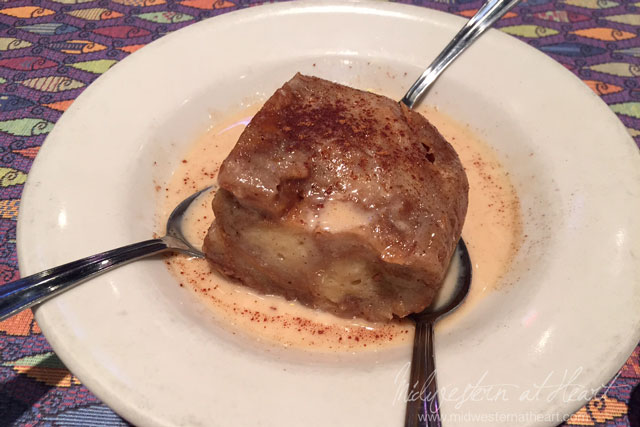 Then it was time to go shopping. Mom went for some jewelry at Versona Jewelry. I got a cherry pitter at William Sonoma (really Abug did because she loves Cherries and this way I don’t have to bite them in 2 and get the seed out for her), Tbug got a backpack for a carry on for our trip later this summer, Abug got a swimsuit that the top was a rash guard (long sleeved) and I think that’s the most damage we were able to do.

Mom went into a store and just as we entered Tbug was doing the pee pee dance. Yes, it was hilarious. So we ran back to Dillards because I knew where the bathroom was there. Then as we were leaving a little boy who no one was watching  came running down the middle of the aisle and about took Abug out. She was in her stroller and if he’d have been just a fraction of a hair to the left his knee would have met her chest. Thank God it didn’t but I was upset. It was cute though because Tbug was about to rip the little boy a new one for almost hurting her little sister. I absolutely LOVE the bond those 2 have. Sadly that all happened so fast there was no time for any of us to go anywhere. Why this little boy was hauling butt looking over his shoulder I don’t know and his family was way to busy at the MAC counter to pay any attention. I was disappointed in them… he’s your son, pay attention!

Anyway Rant over. Restaurant Good, that’s what matters!!! And we had a blast today on our girls day. I love spending time with those 3 and love making memories with them. I was extremely happy that at a last minute she was able to go with us!!